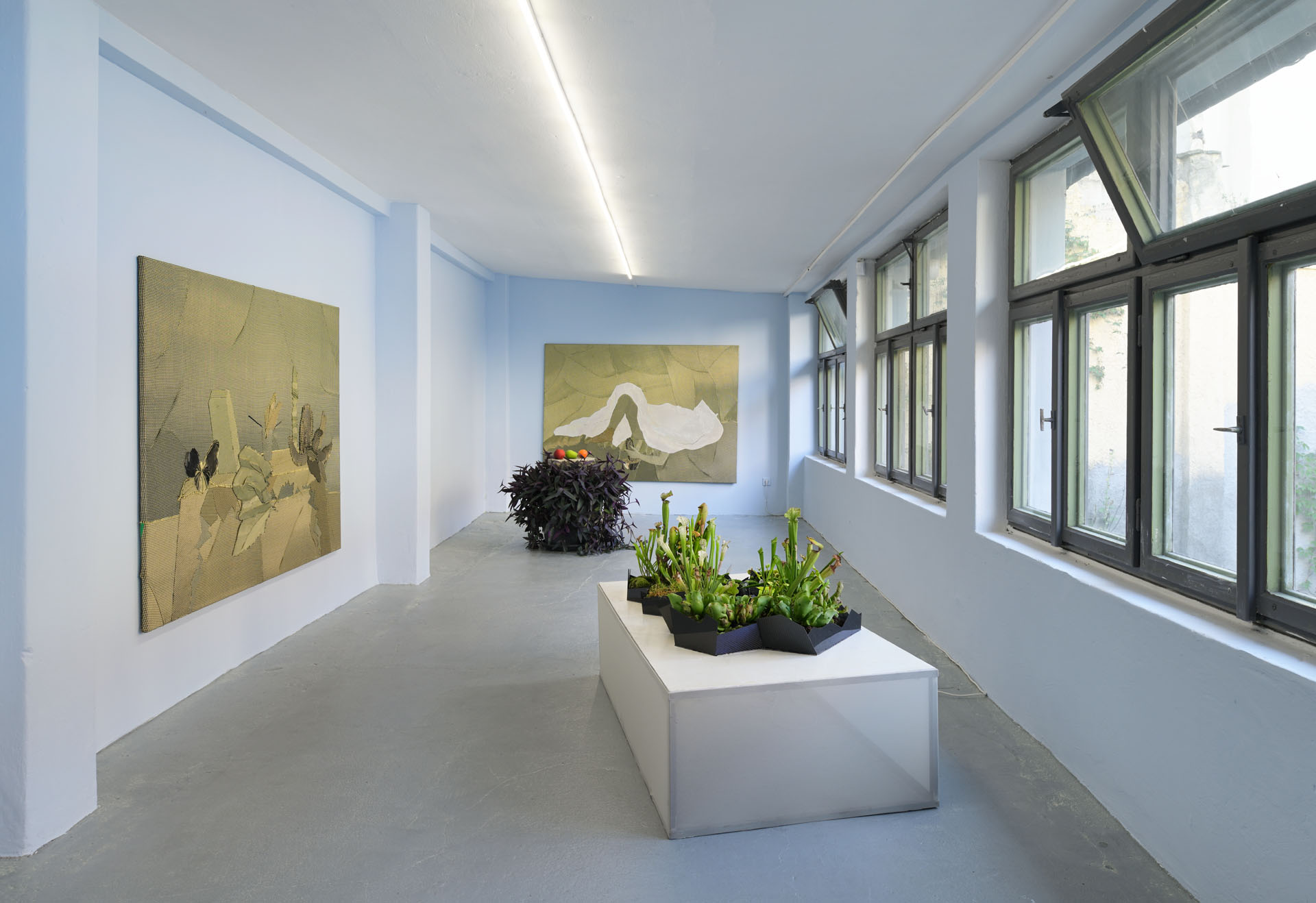 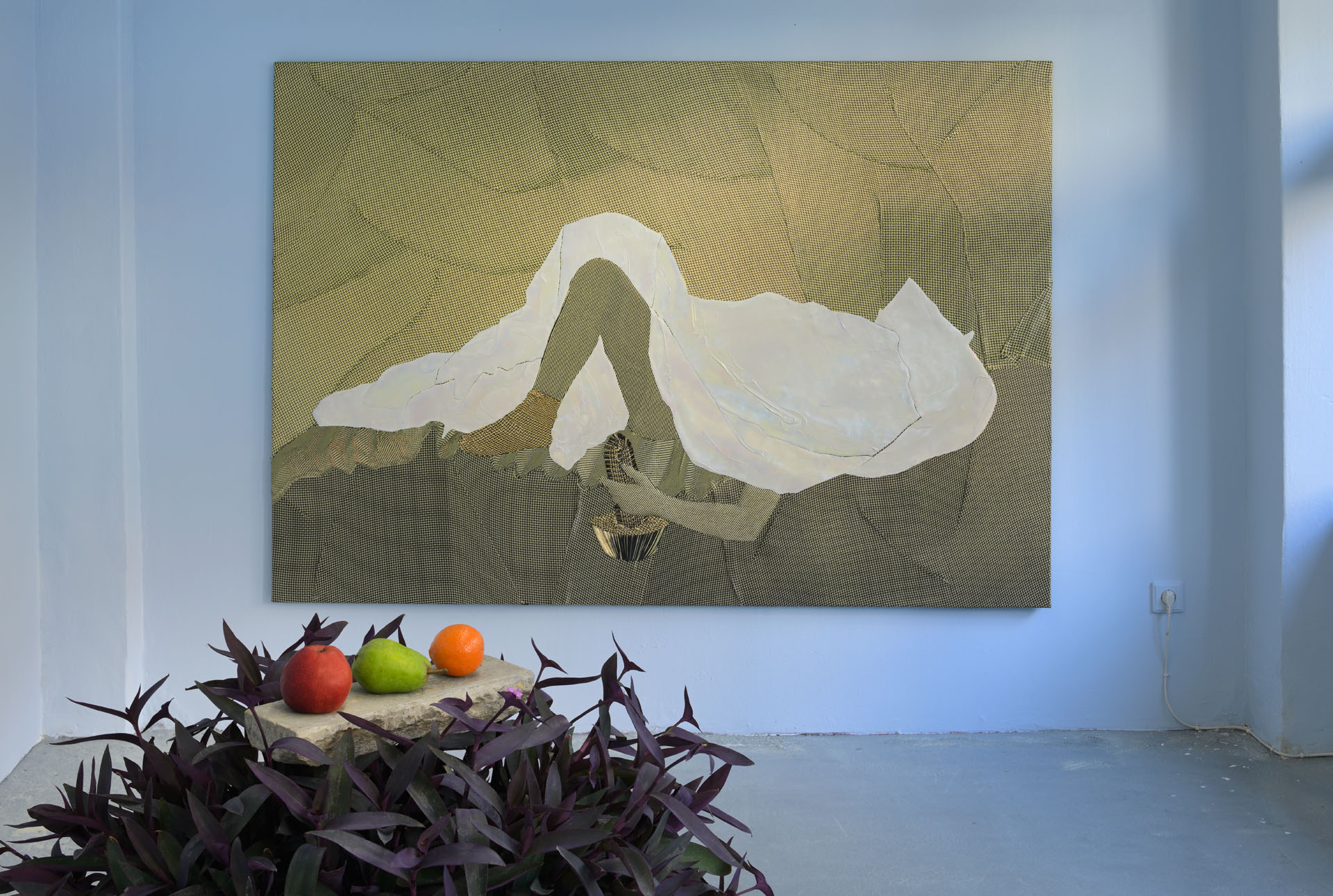 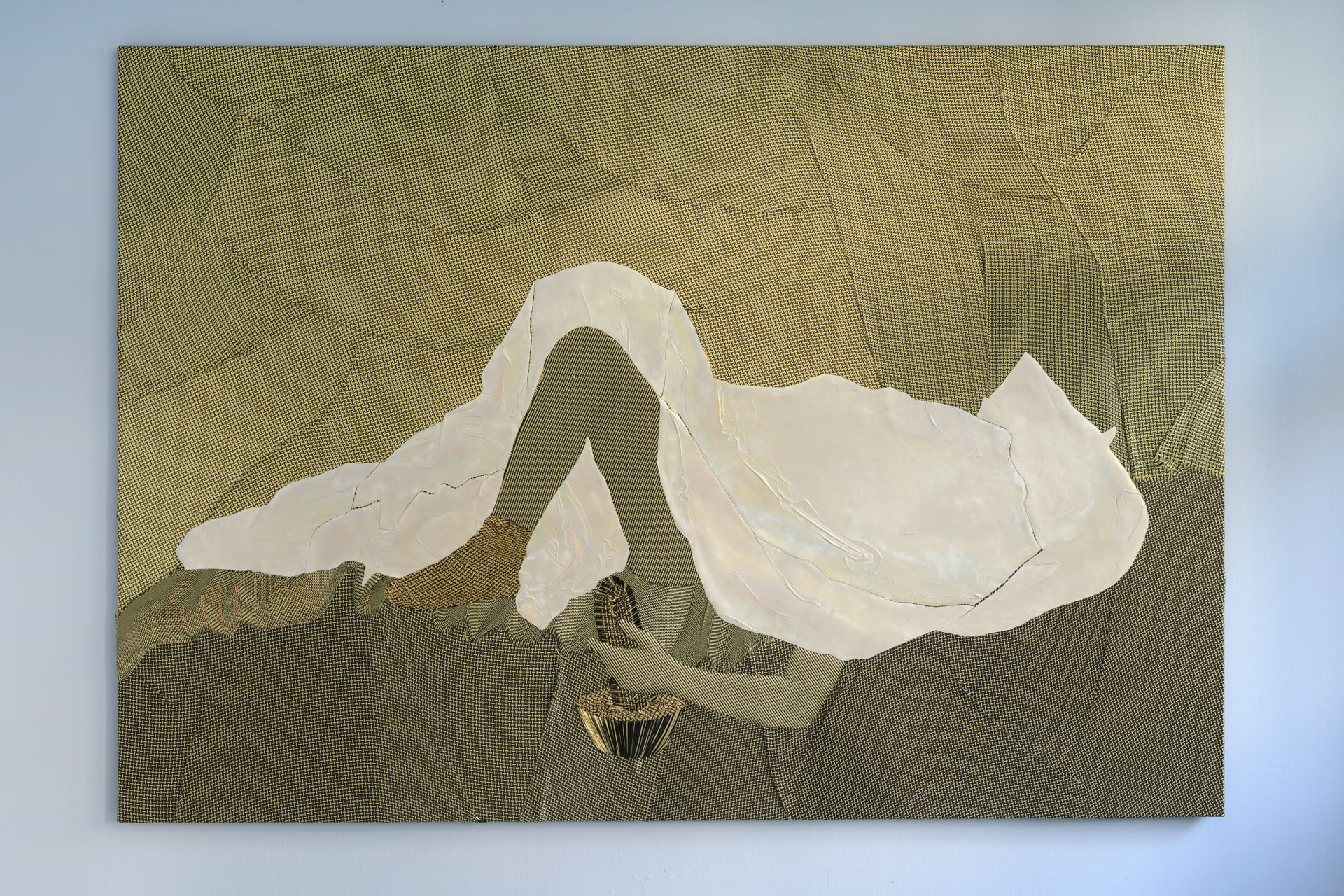 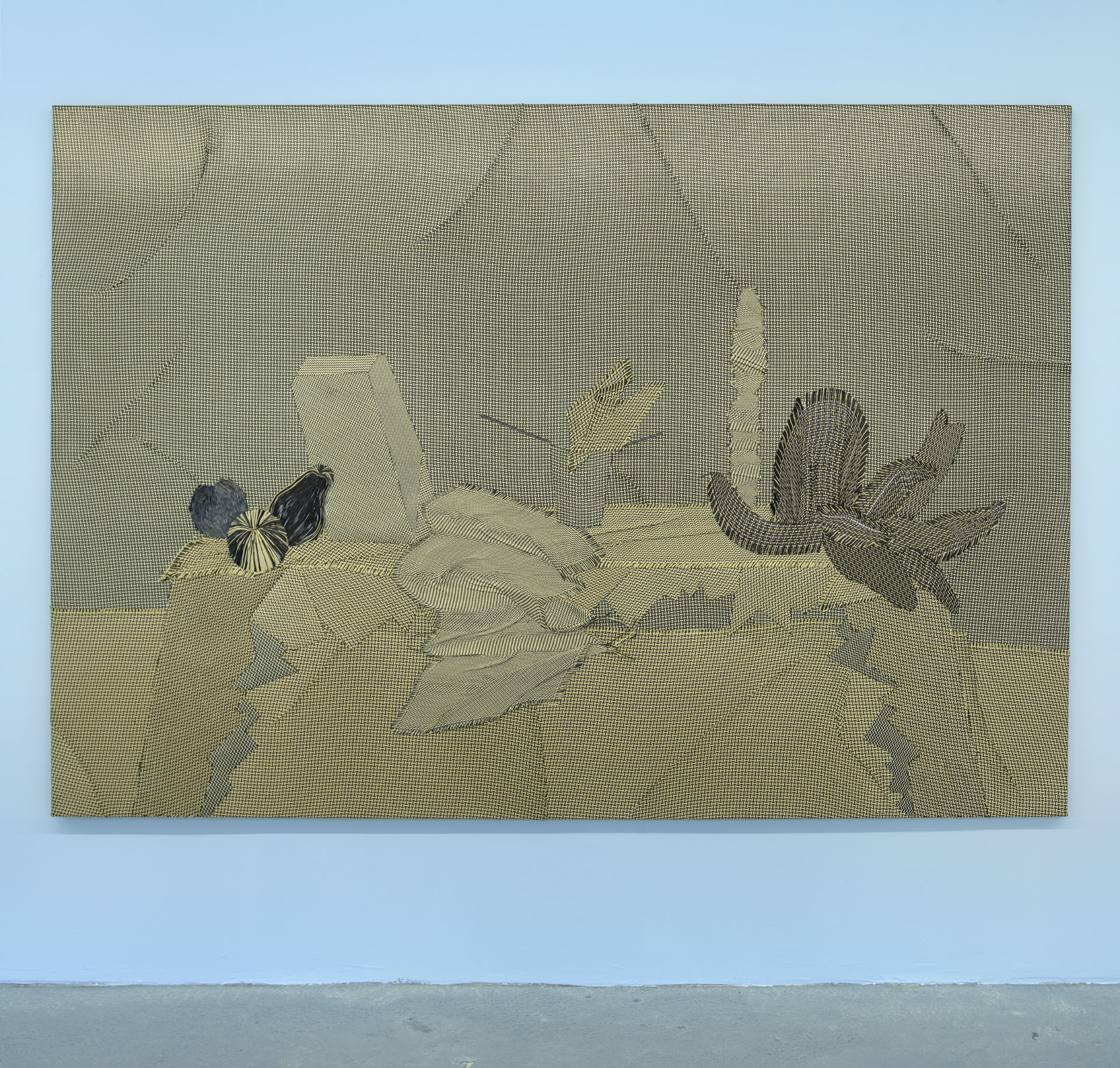 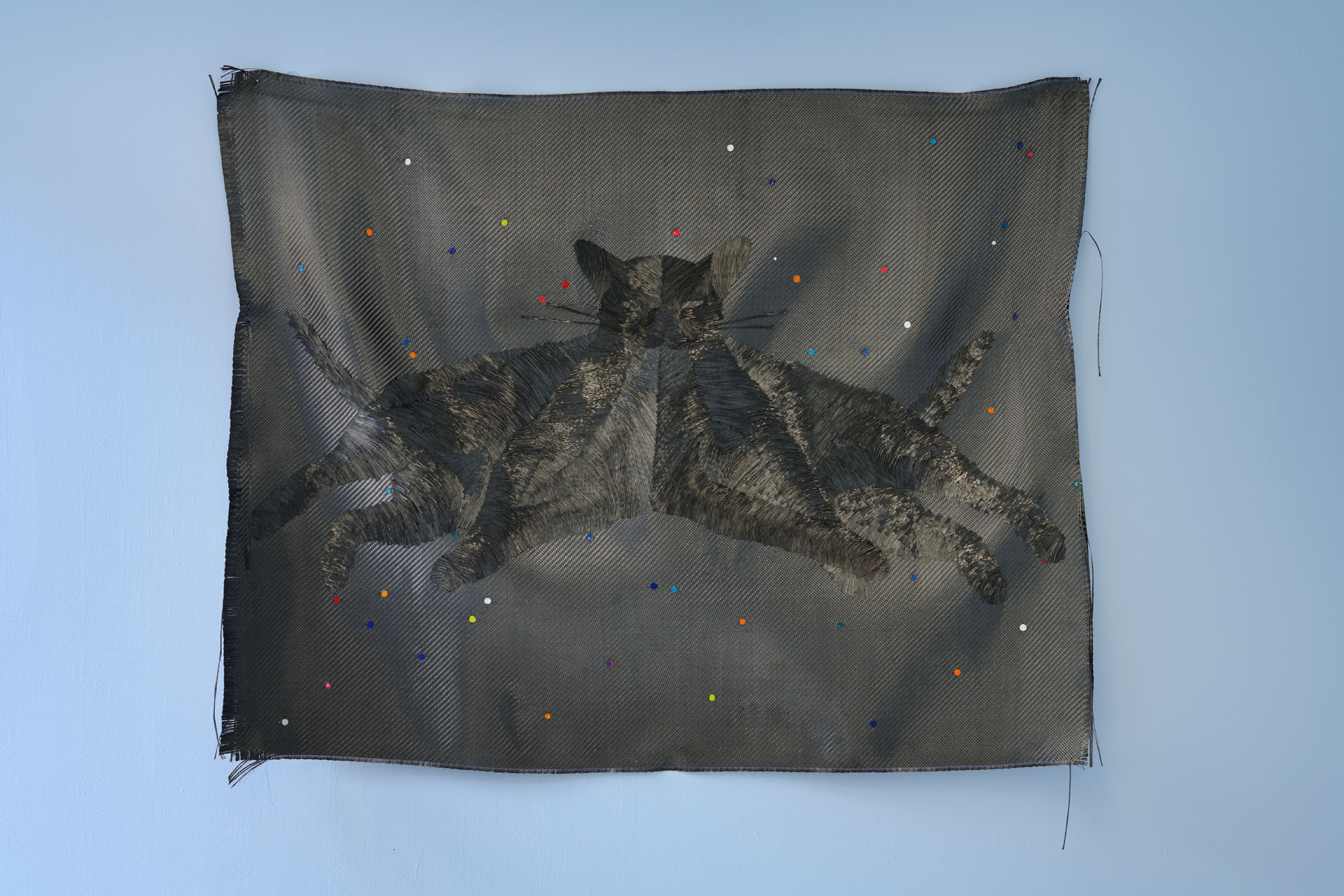 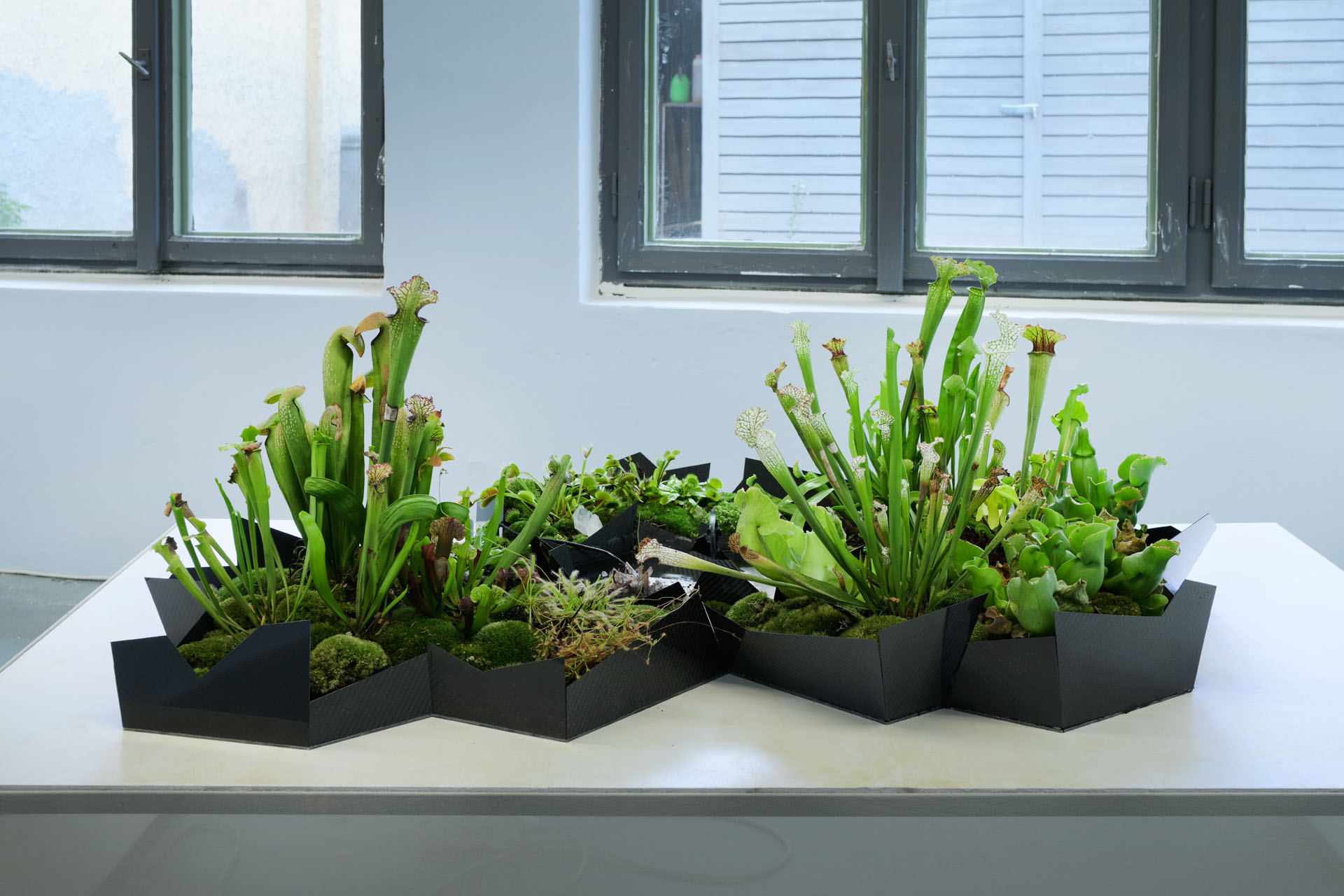 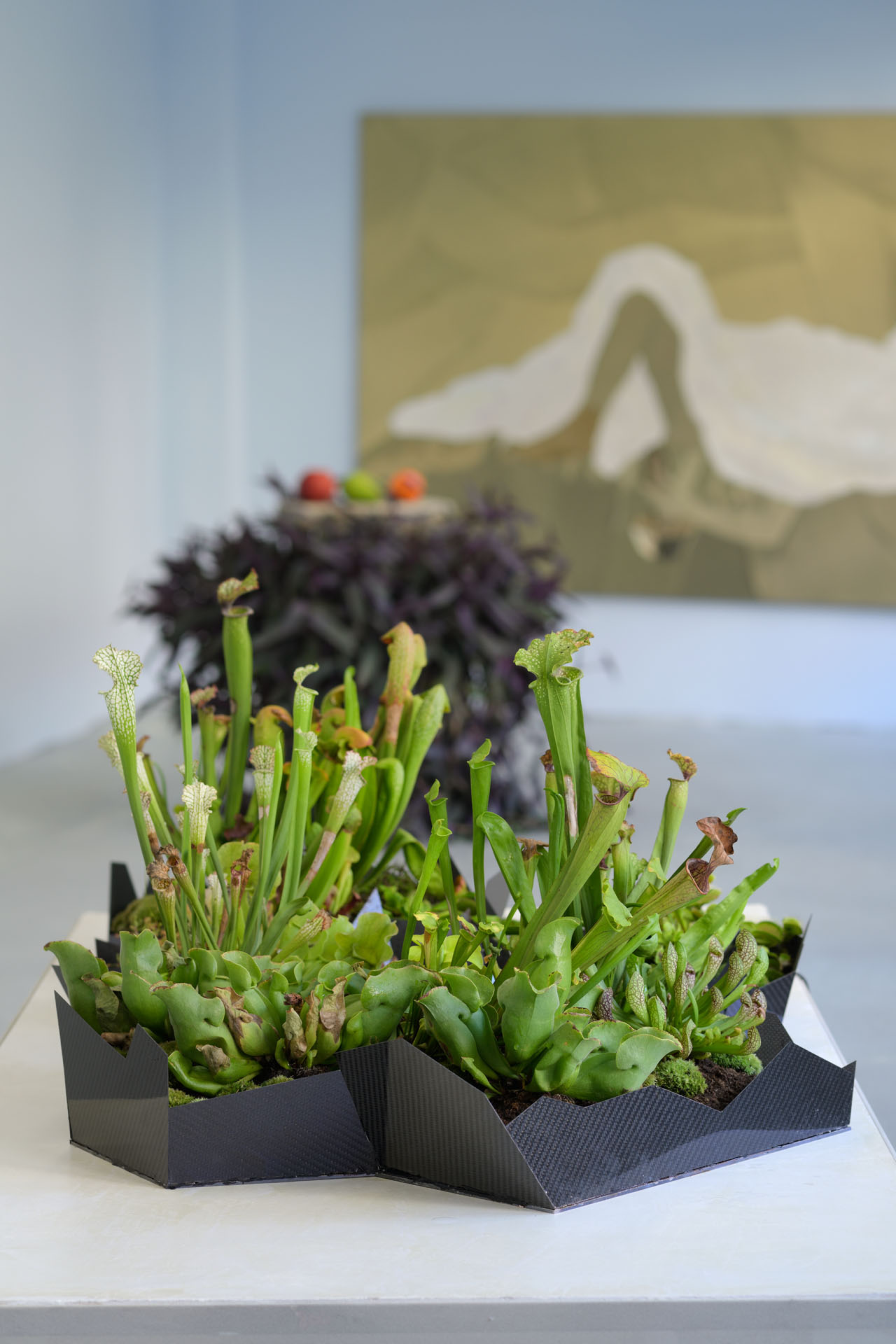 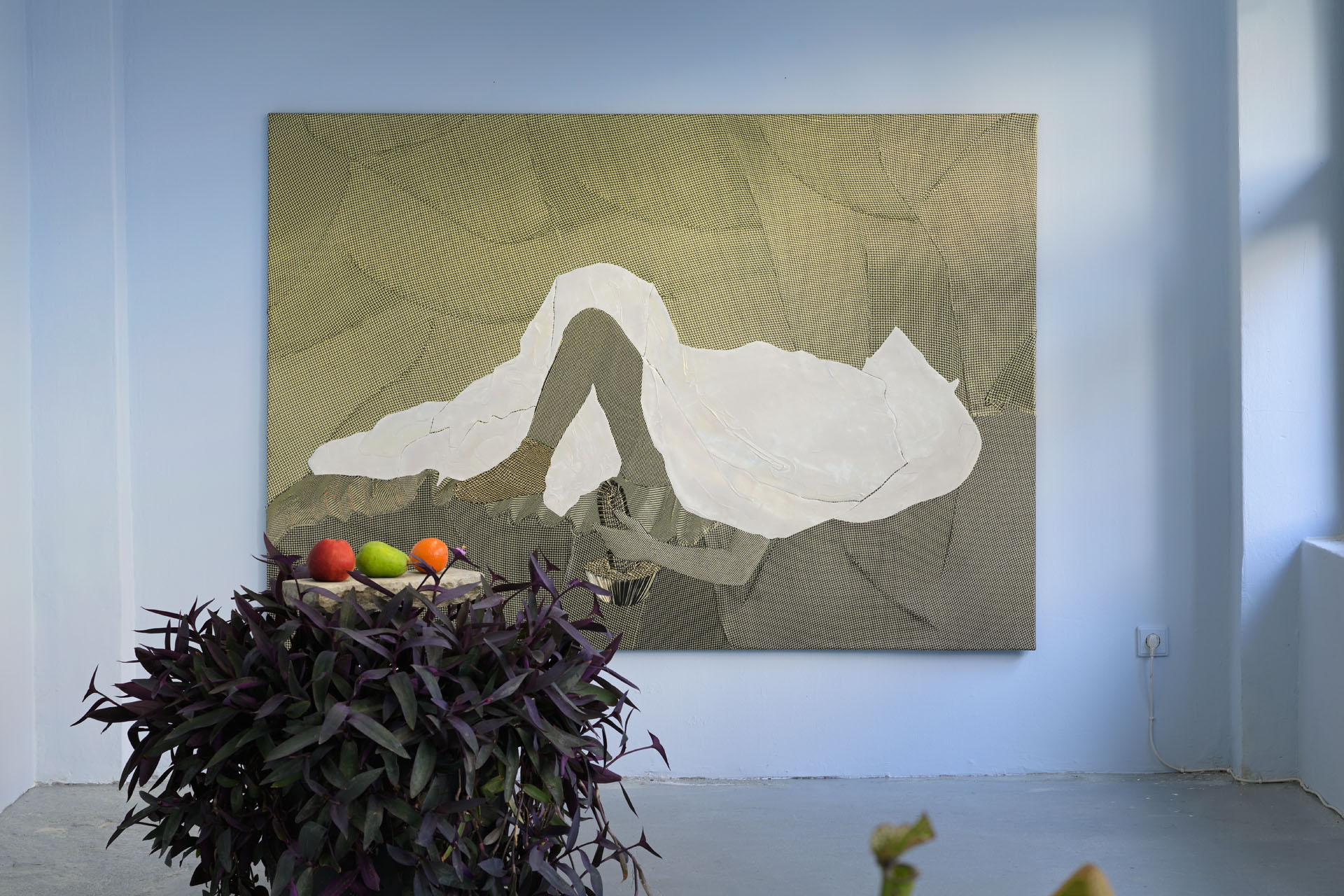 hunt kastner is pleased to present an exhibition by the Brno-based artist Natalie Perkof. Born 1979 in Uherský Brod to a Czech mother and Ghanaian father, she studied painting in Ostrava at the Faculty of Fine Art and Music (under Daniel Balabán) and at the Faculty of Fine Arts in Brno (under Petr Veselý and Petr Kvíčala), graduating in 2005.  The starting point of Perkof’s expression lies in figural painting, in which strong reductiveness, lapidary forms, bright pastel colors and an emphasis on material experimentation are applied.  Over time her practice has naturally expanded into the creation of objects, the field of photography, site-specific installation, graphic design, theatre design and realizations in architecture.

In The Cabinet of Miniatures and Delights, Natalie’s Perkof first solo show at hunt kastner, a two-bodied cat in a luxuriant black shine observes a wild growth below – sex ecologies of fruit, cacti, phallic and carnivorous plants spill from gold canvasses in the gallery space.  Houseplants – bonsai trees in particular – are a recurring motif in Perkof’s practice.  Through their miniature form they speak of the trimming, snipping and carefully removing an excessive growth, in order to sustain its ‘natural’ form, yet in fact firmly a man-made decorative object. Such a careful threading of ’nature’ as a design process can be compared to the way the body, with all its excesses, is trimmed, maintained and designed beyond recognition according to established norms. In the Gender Trouble, philosopher Judith Butler describes such a set of regulations as masquerade, which are instrumental in enacting gender norms through carefully enforced lived practices. It is only overspills of desire, its unpredictable outburst, queer crossings that betray such order.

In The Cabinet of Miniatures and Delights such queer crossing and overspills are eminent. Seemingly straightforward sexualised forms and gestures are tweaked, withheld and overshadowed: the phallic cactus enclosed by a hand which seemingly supports it but perhaps also shows restrictions coming with a necessary posturing of masculinity. The domesticity of houseplants is noted but loaded with pleasure and excess – the boundary crossing is omnipresent: a vagina resembling the spiky purplish tentacles of carnivorous plants are delightful to look at only to lure in the insect to be devoured. Motifs of the feminine intimacy: fresh fruit, still life of the shelf expand through other-than-human metaphorical associations. Black cats, cacti, plants and bodies reshape each other in Perkof’s work, showing how our conception of nature is formed through dreams, language and mythology and in that way irreversibly tied to sexuality.

Yet a notion of discomfort lurks throughout this carefully thought-out arrangement, where in Perkof’s words “earthy or soil-fueled materiality of the body is recalled”. As philosopher Julia Kristeva argues, our understanding of the body is always formed through the maternal – the mother’s body as primary experience – which through the lens of patriarchy is reinstated in the imaginary as the abject, leaky and deformed by processes of aging. In Perkof’s practice, notions of soil and the earthiness of the body depart from psychoanalysis by subtly introducing racialised notions of Black sexuality.  In the work Manual of Nature (Cactus) the body is anonymous and concealed; it is covered as a white bundle. The industrial fabric that Perkof repeatedly returns to in her wall canvasses is intense, seemingly tactile and luxurious yet concealing its role as a support material that on a closer contact irritates human skin.  Such an ambiguity is then reinforced by the shroud that both suppresses and protects the figure, creating a sense of spill as much as camouflage.  As the Black scholar Edna Bonhomme argues, a boundless joy of Black sexuality is snipped, tweaked and curtailed by the majority that seek to control it as excessive and monstrous.  In this context, white as a highly symbolic colour of purity is set against the concealed figure firmly embedded in the material and it is here where Perkof’s recent work questioning her belonging and the subjectivity of her diasporic Afro-Czech experience is made, evoking how questions of (in)visibility are staged through the notion of pleasure.