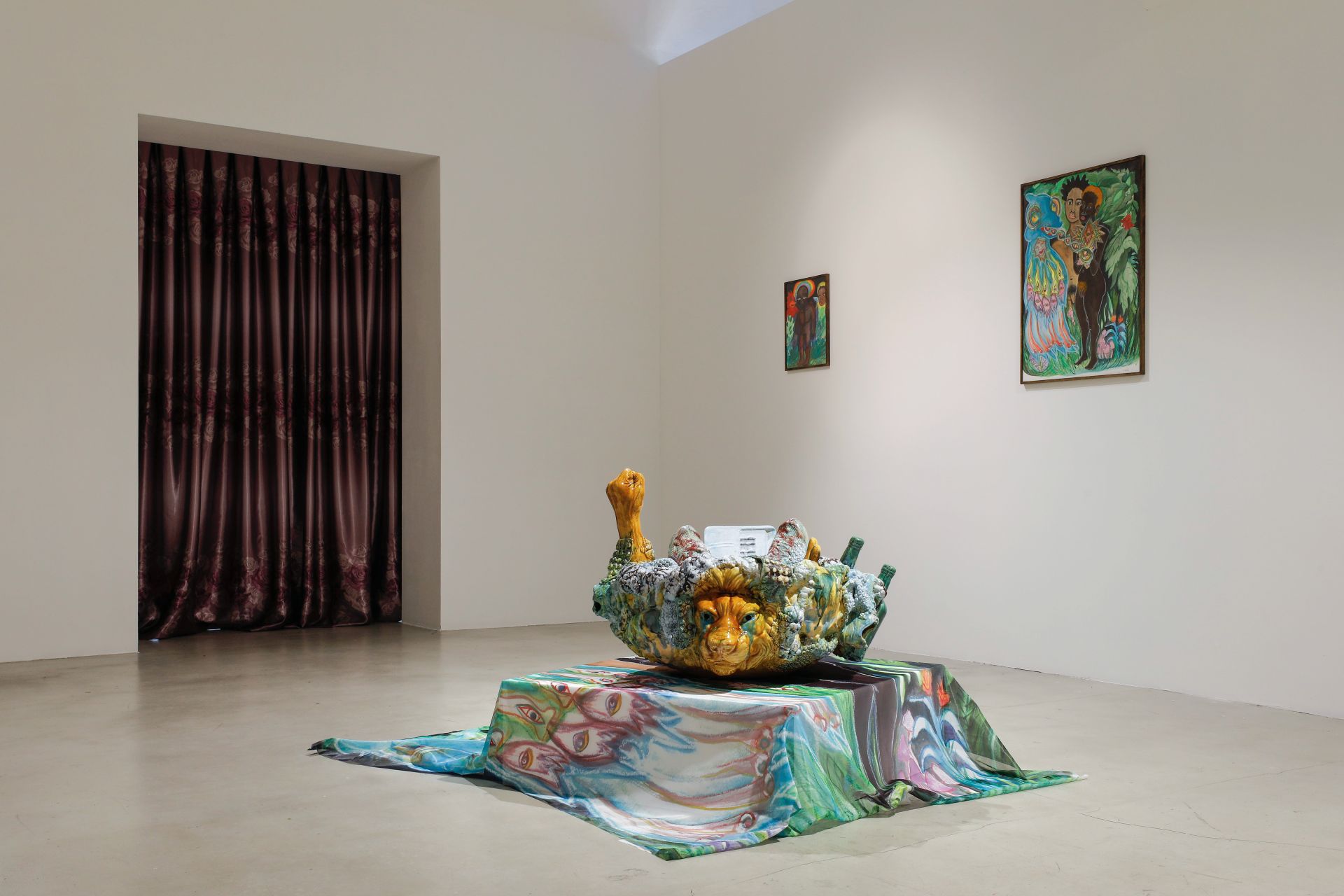 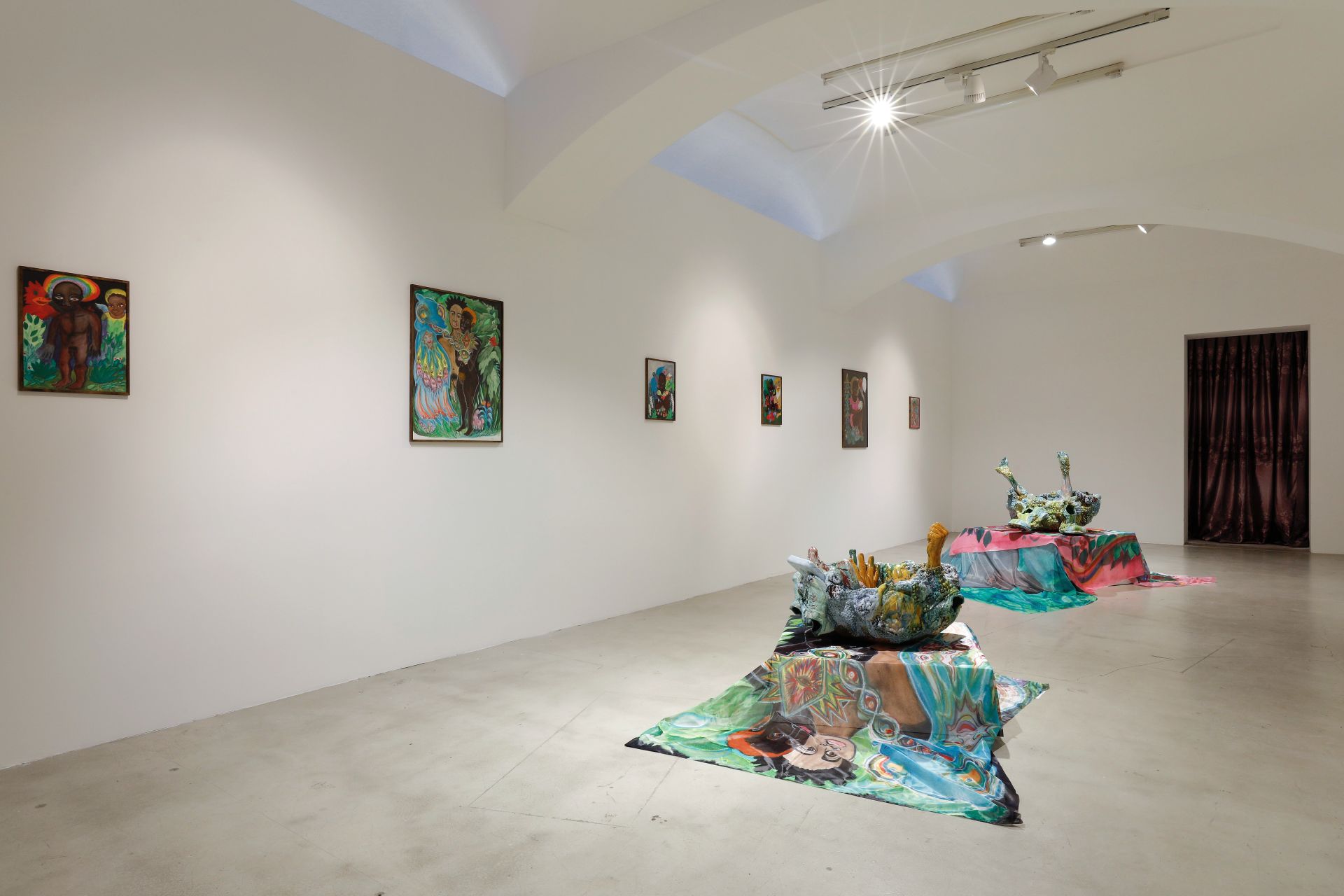 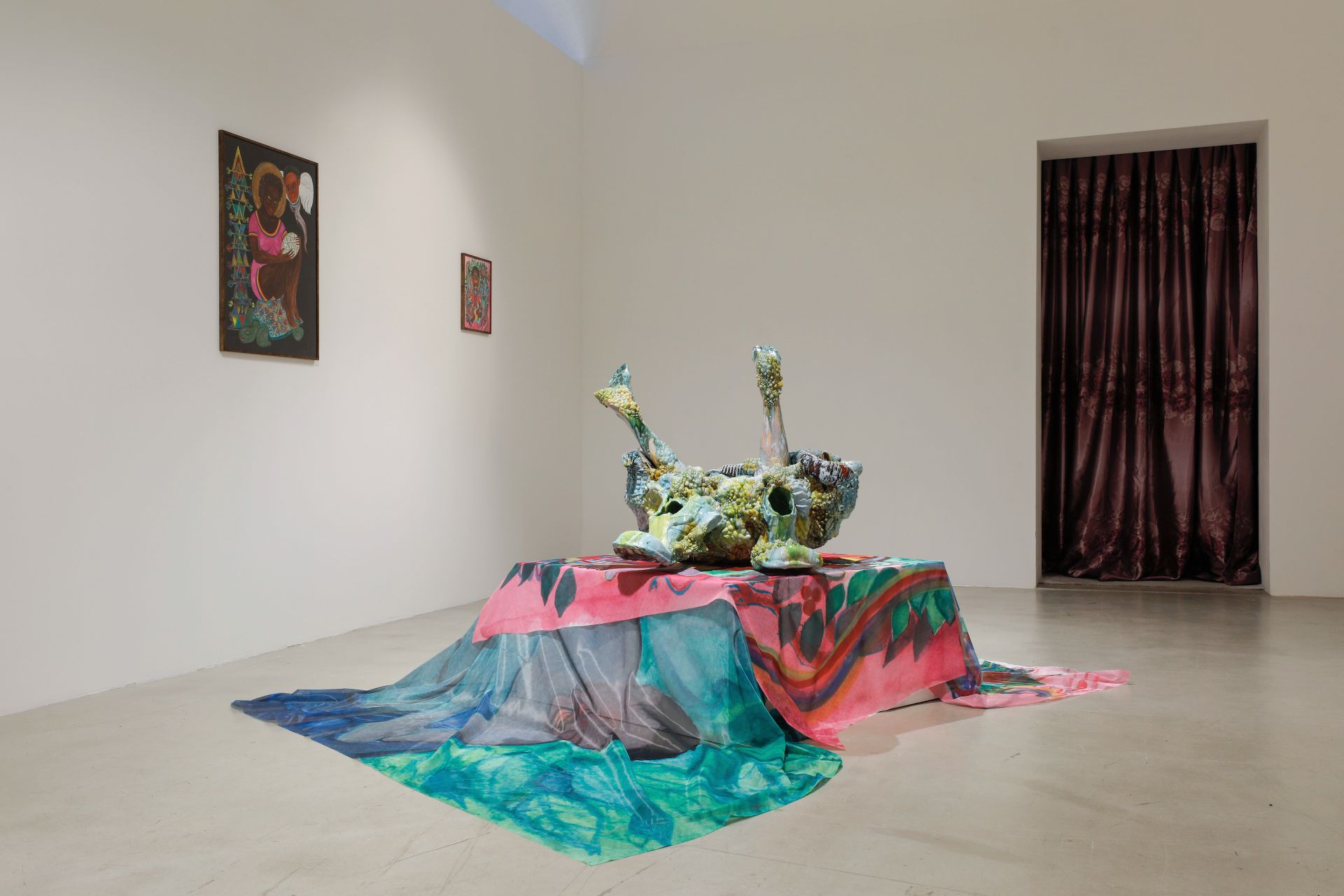 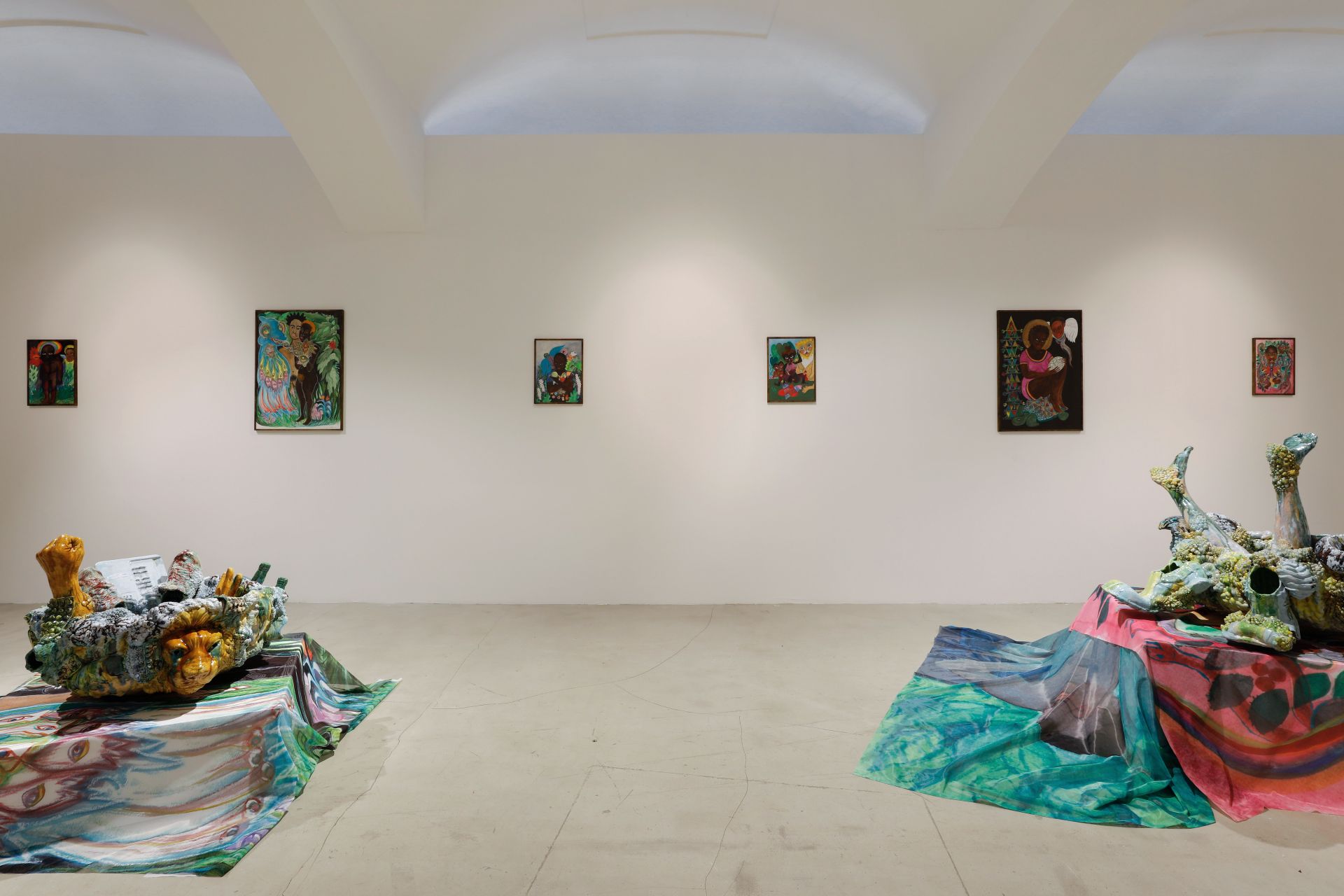 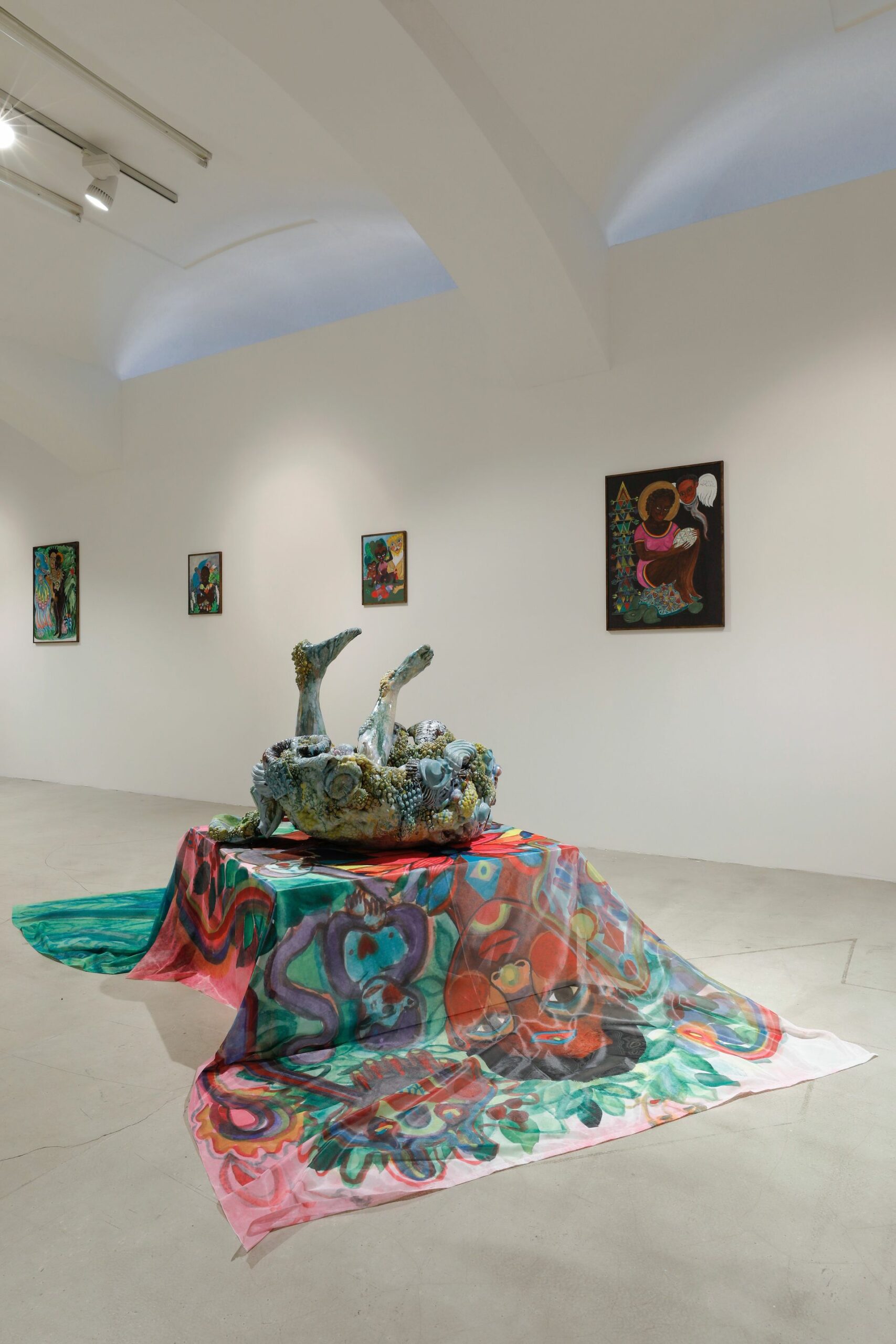 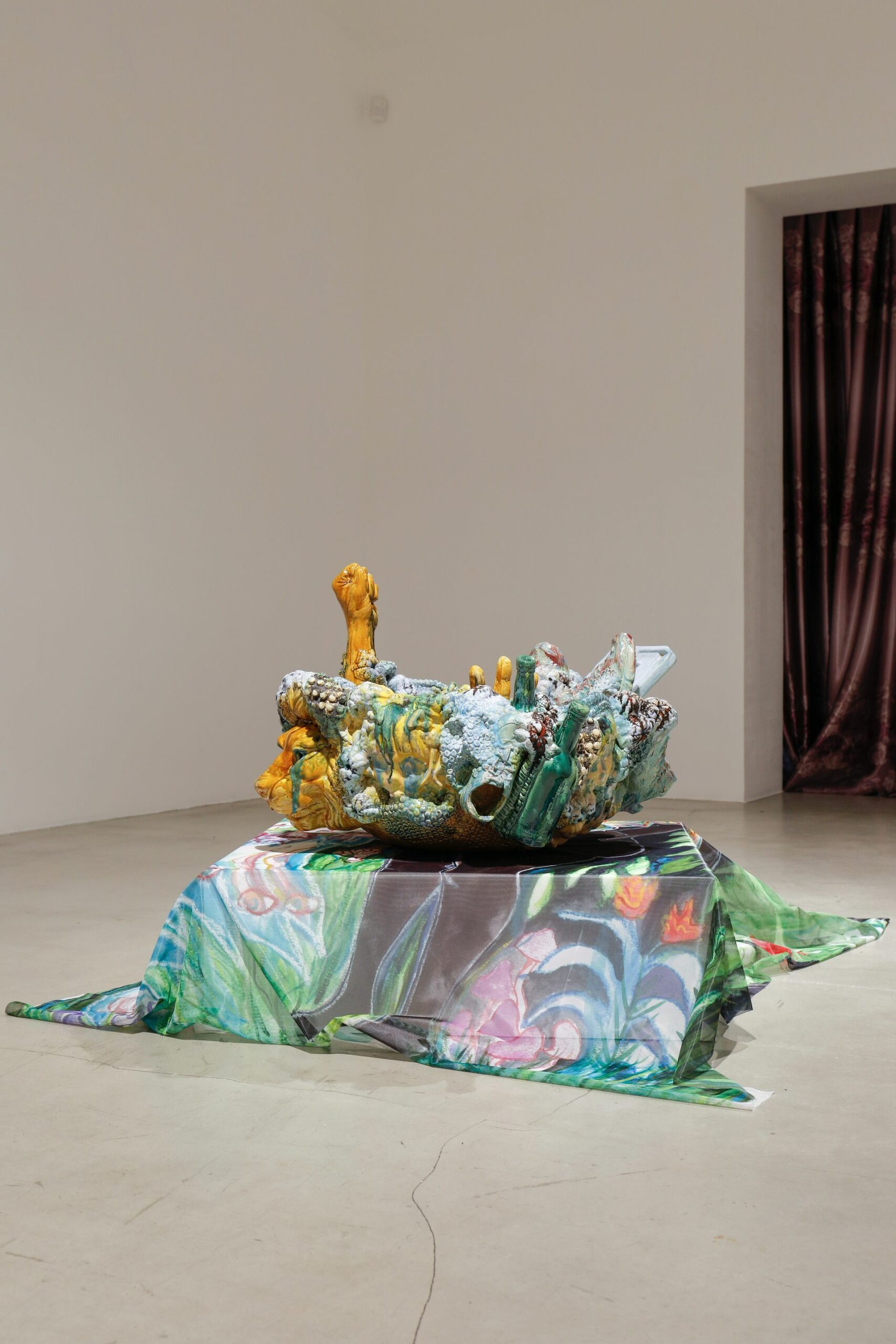 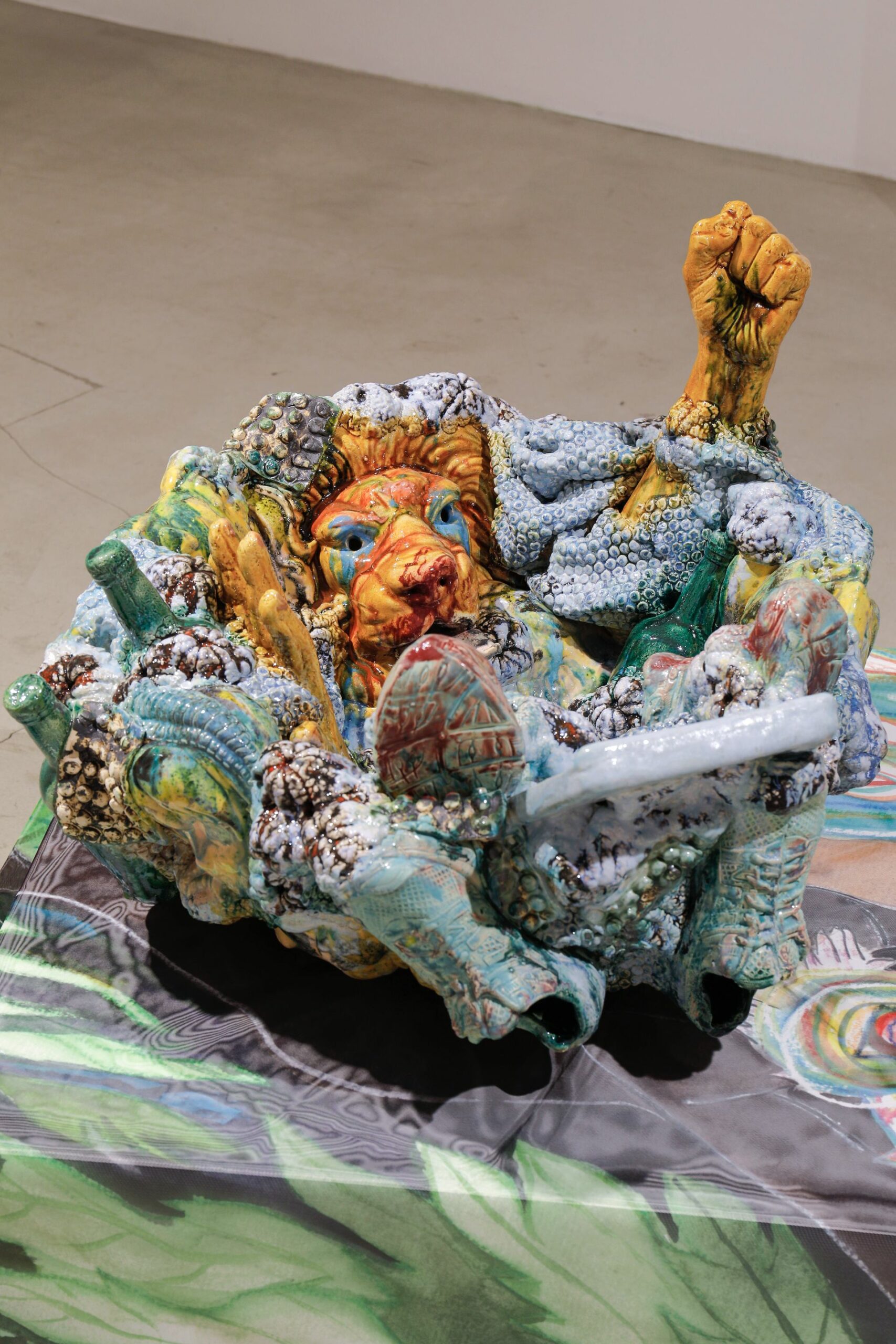 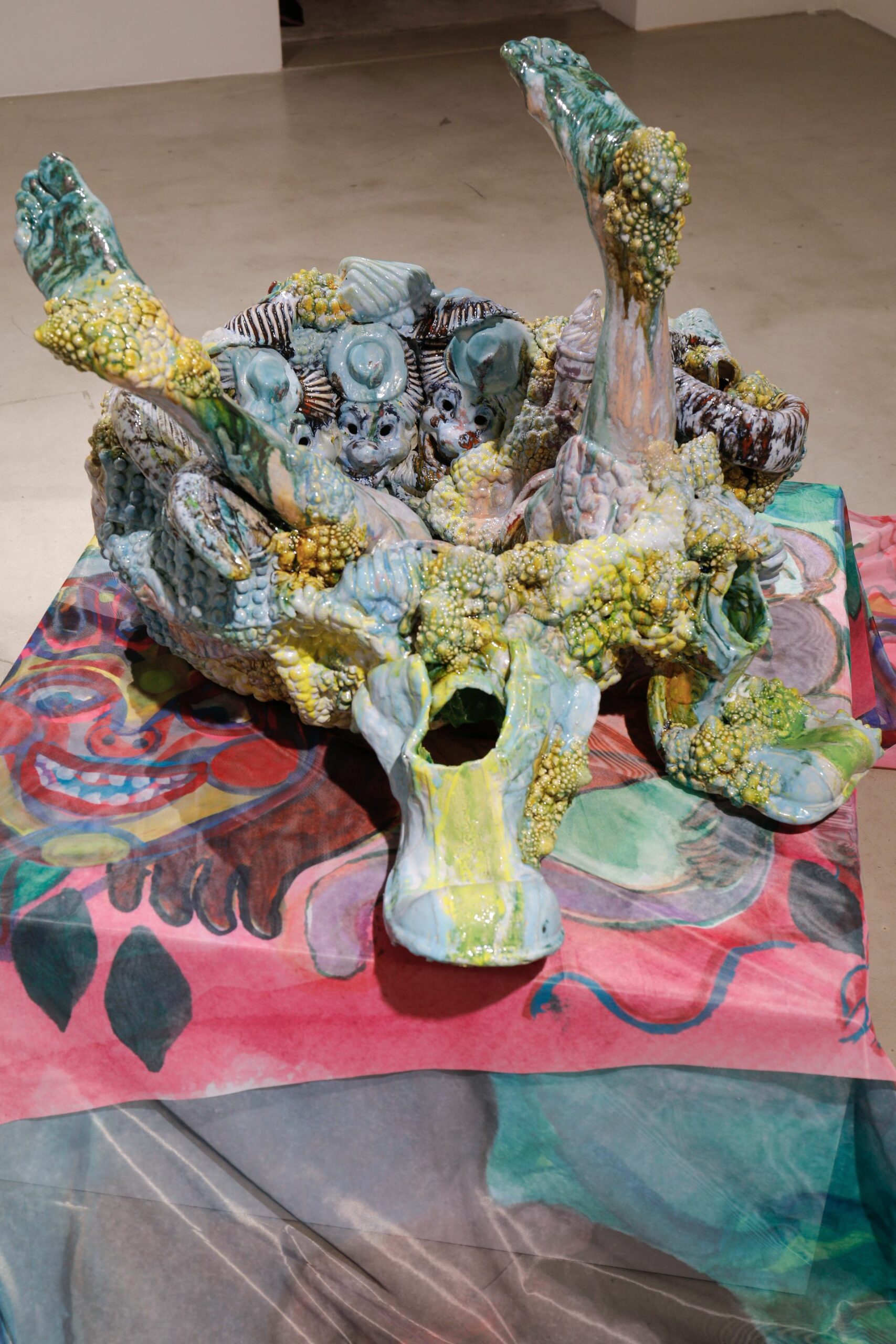 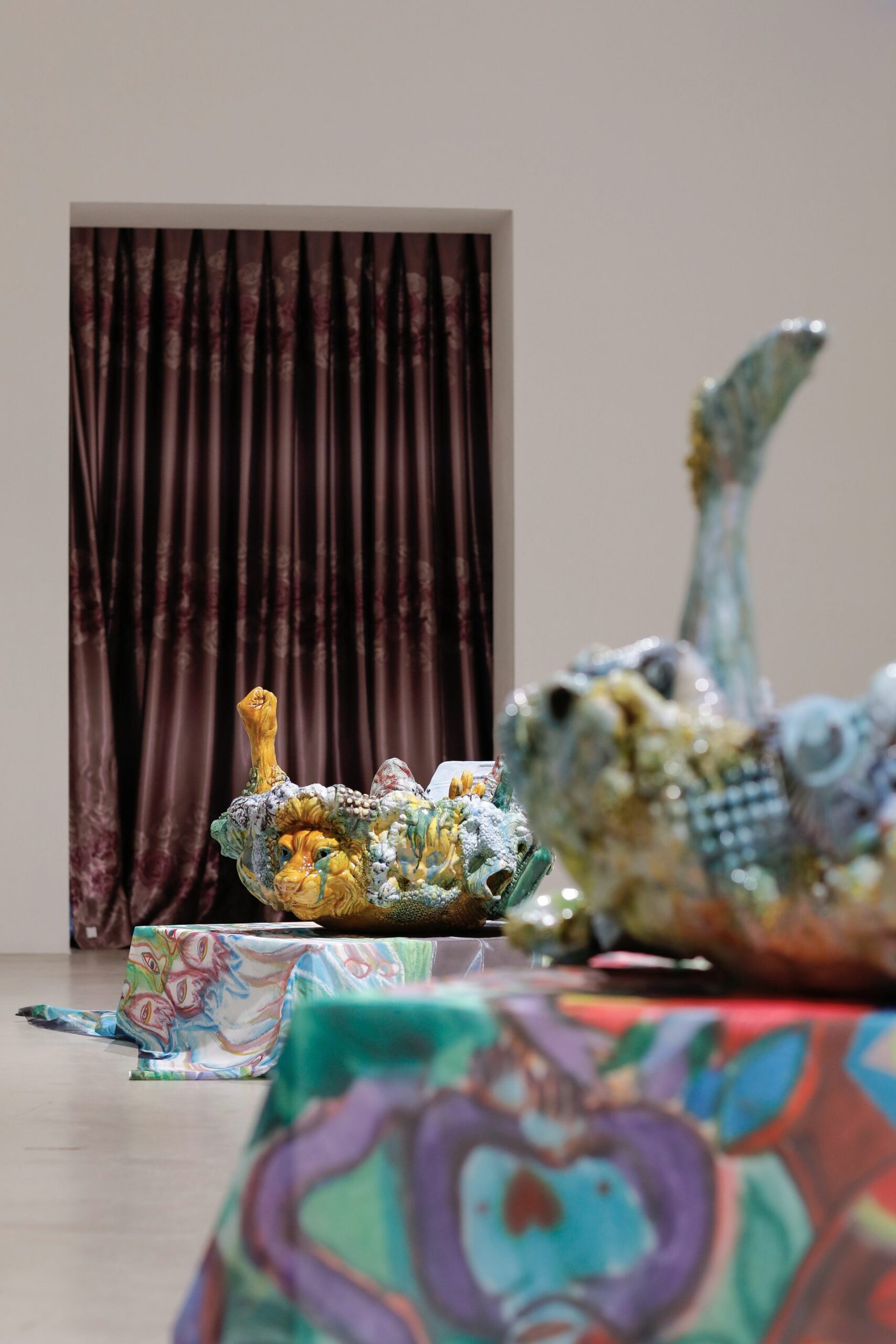 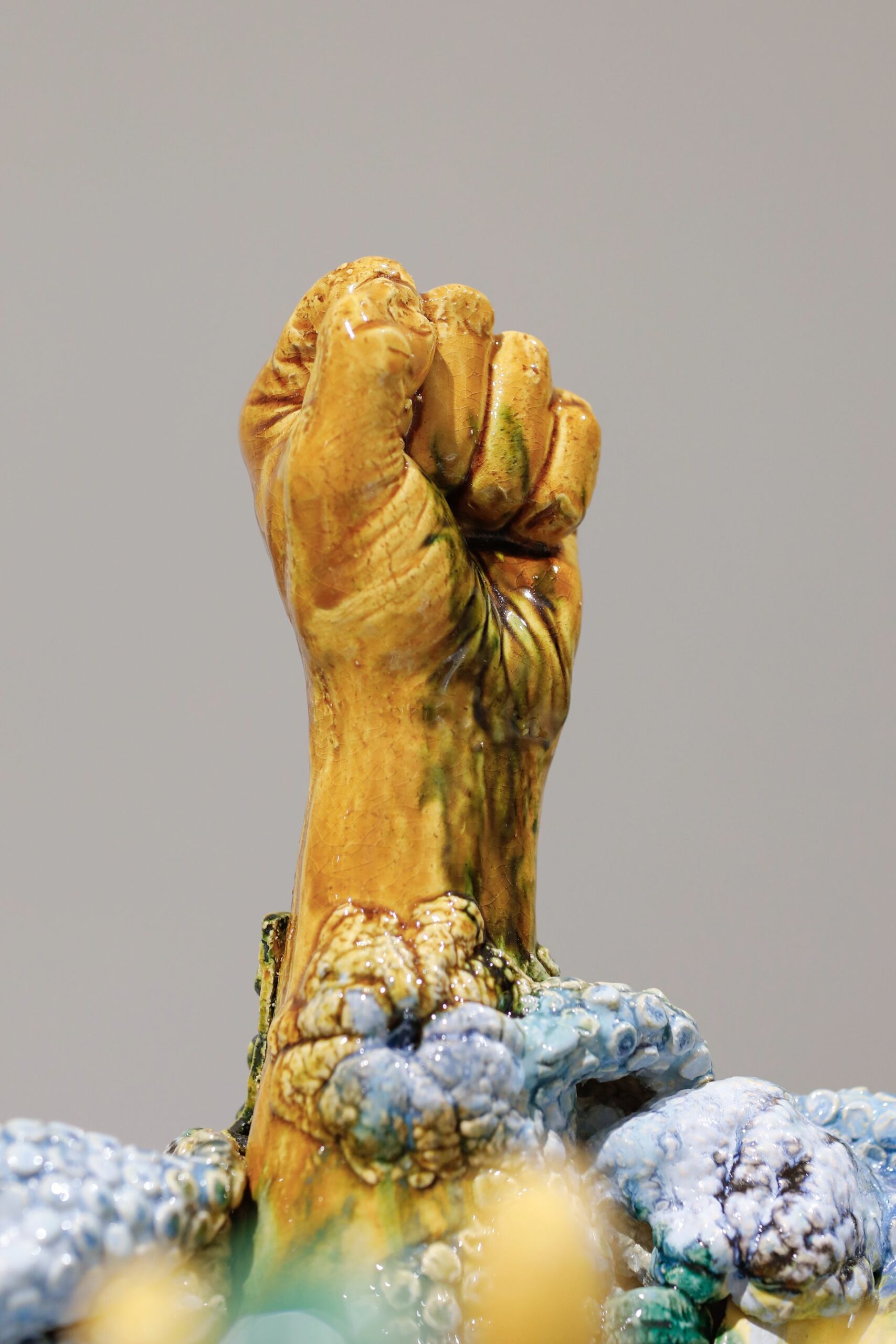 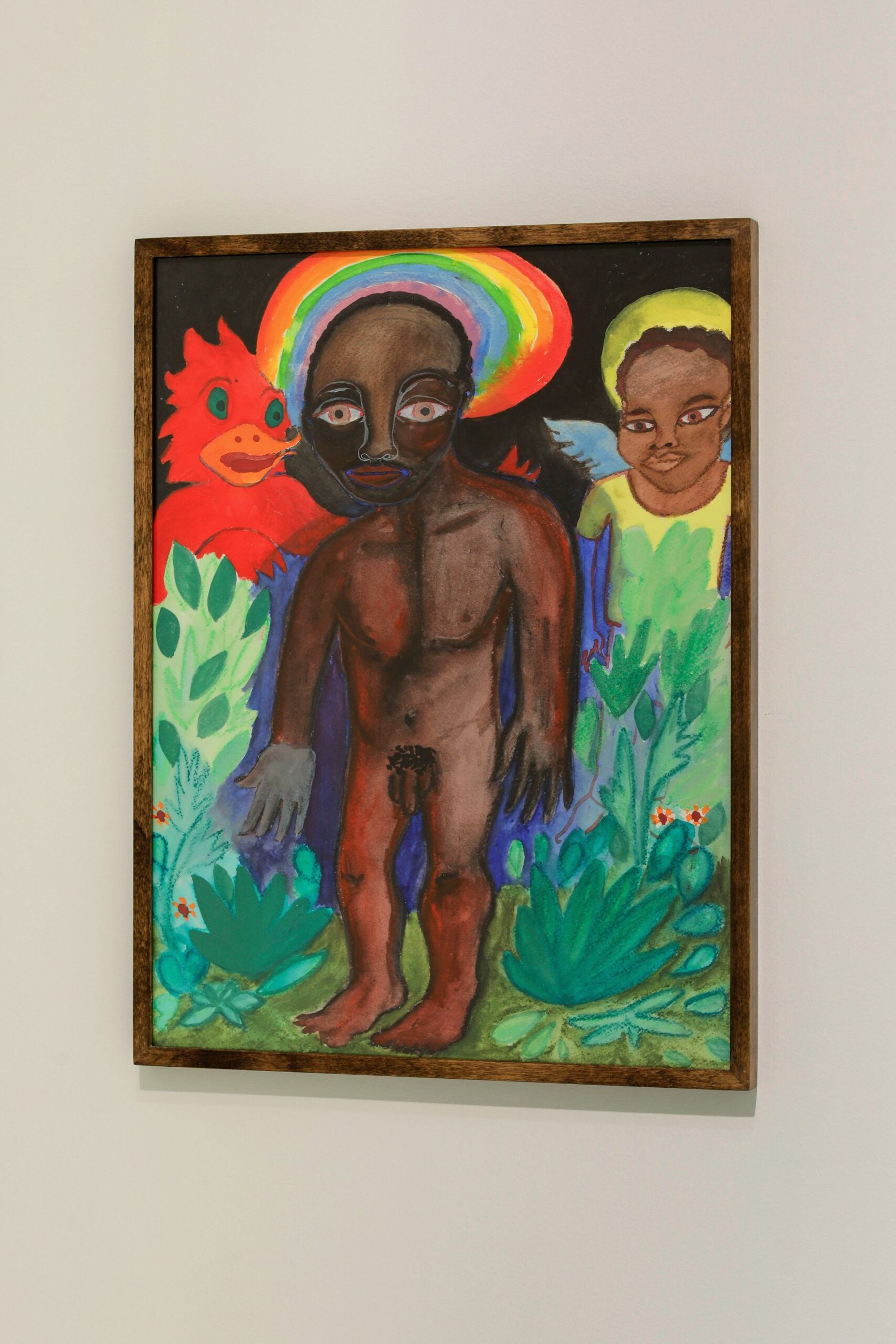 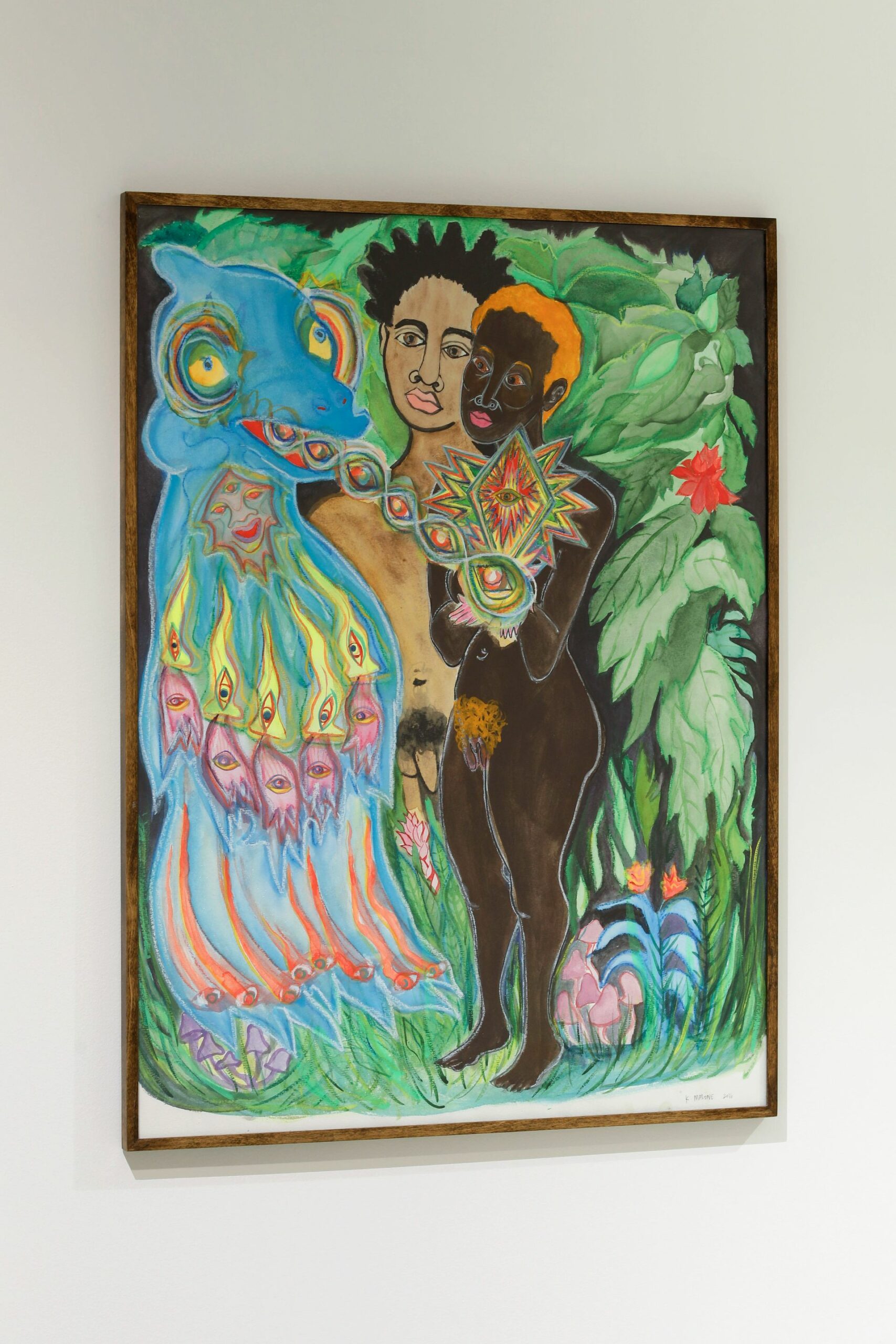 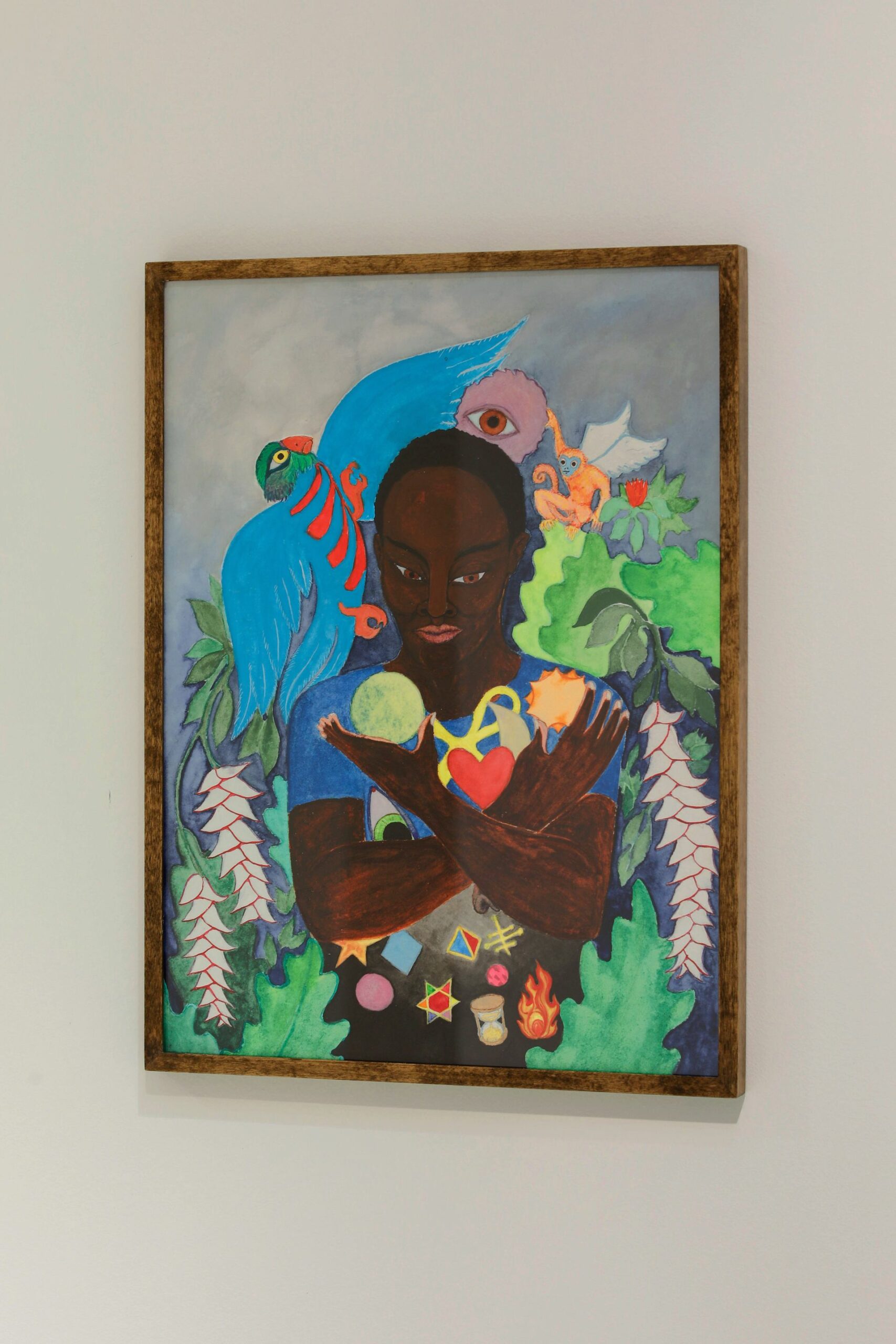 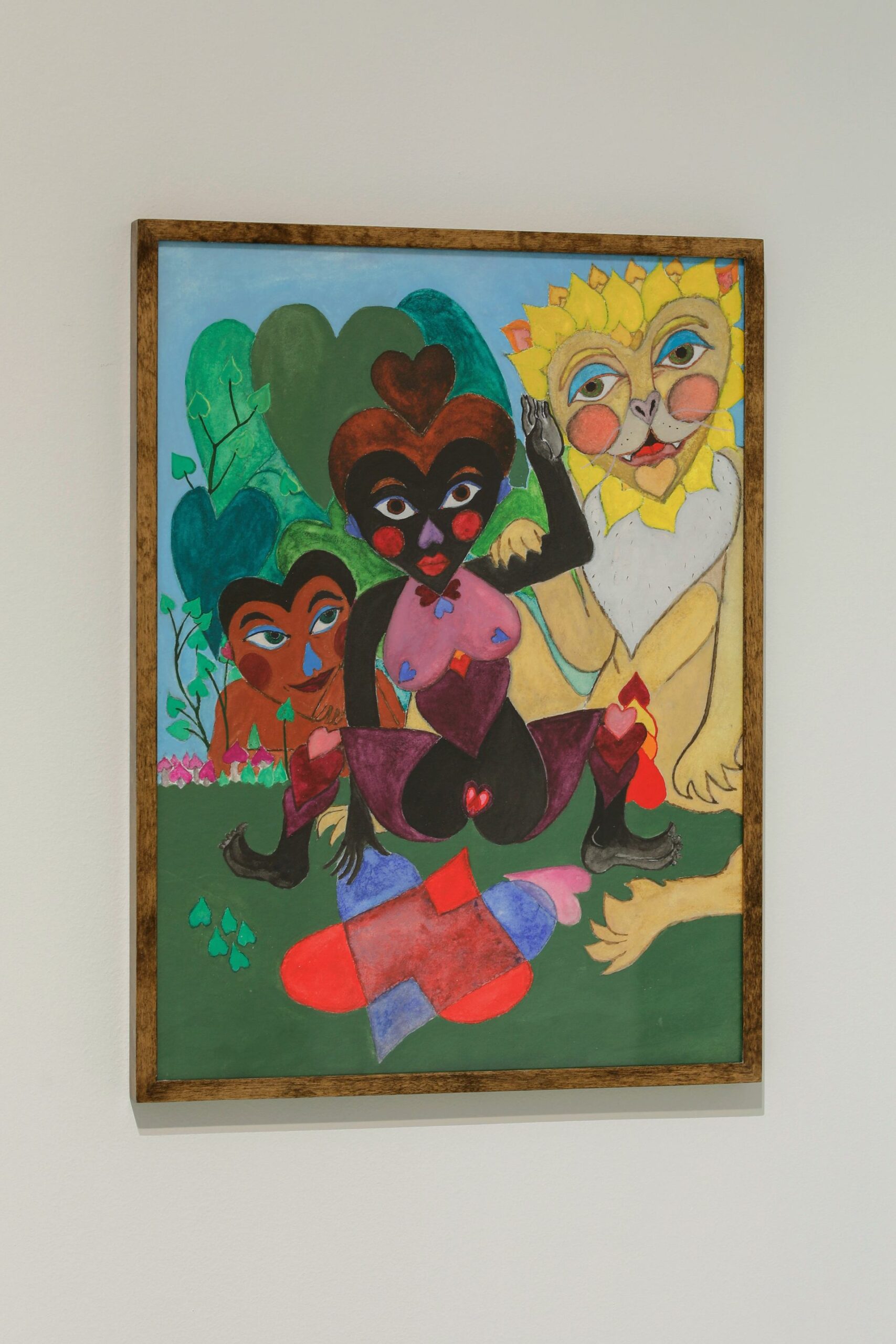 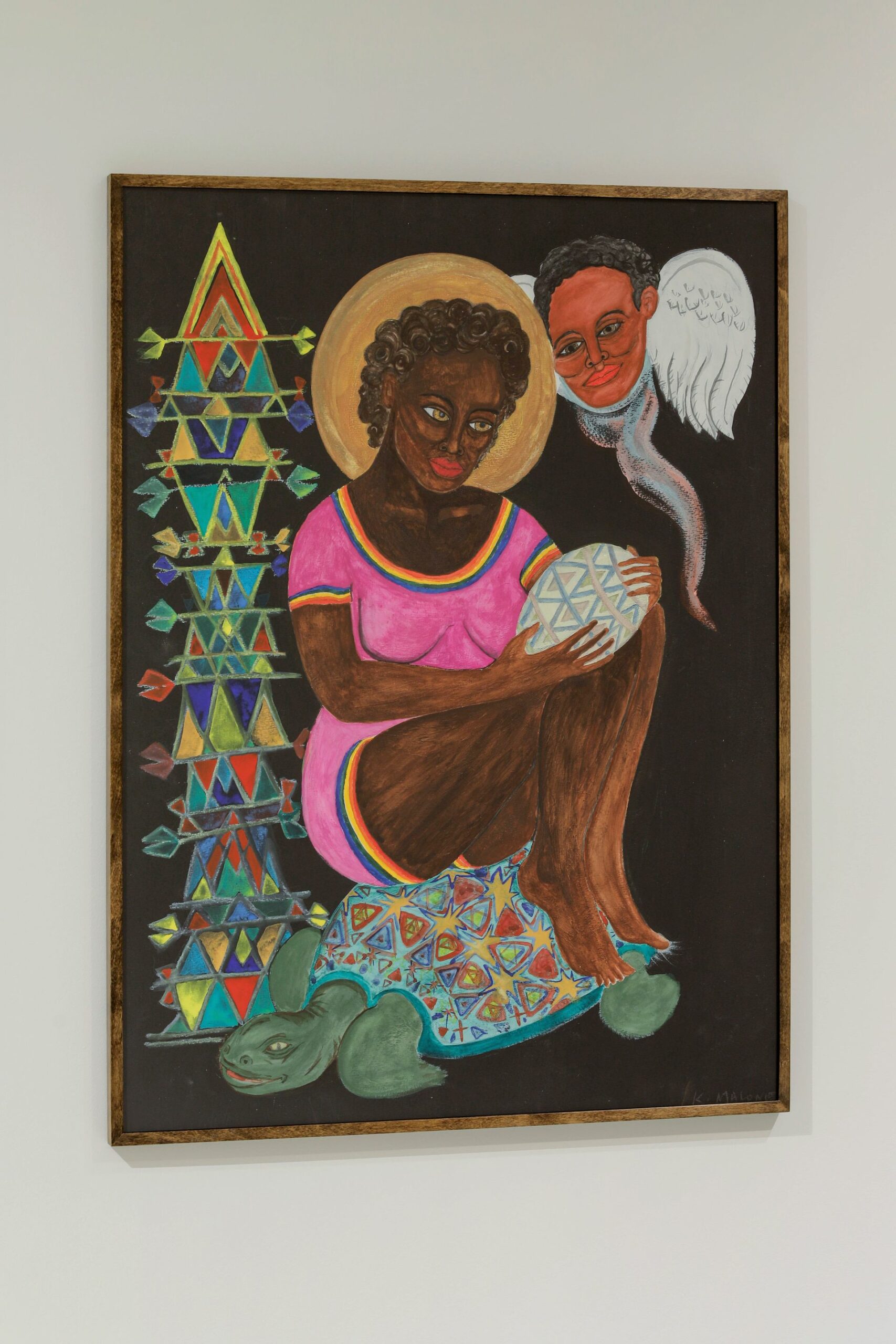 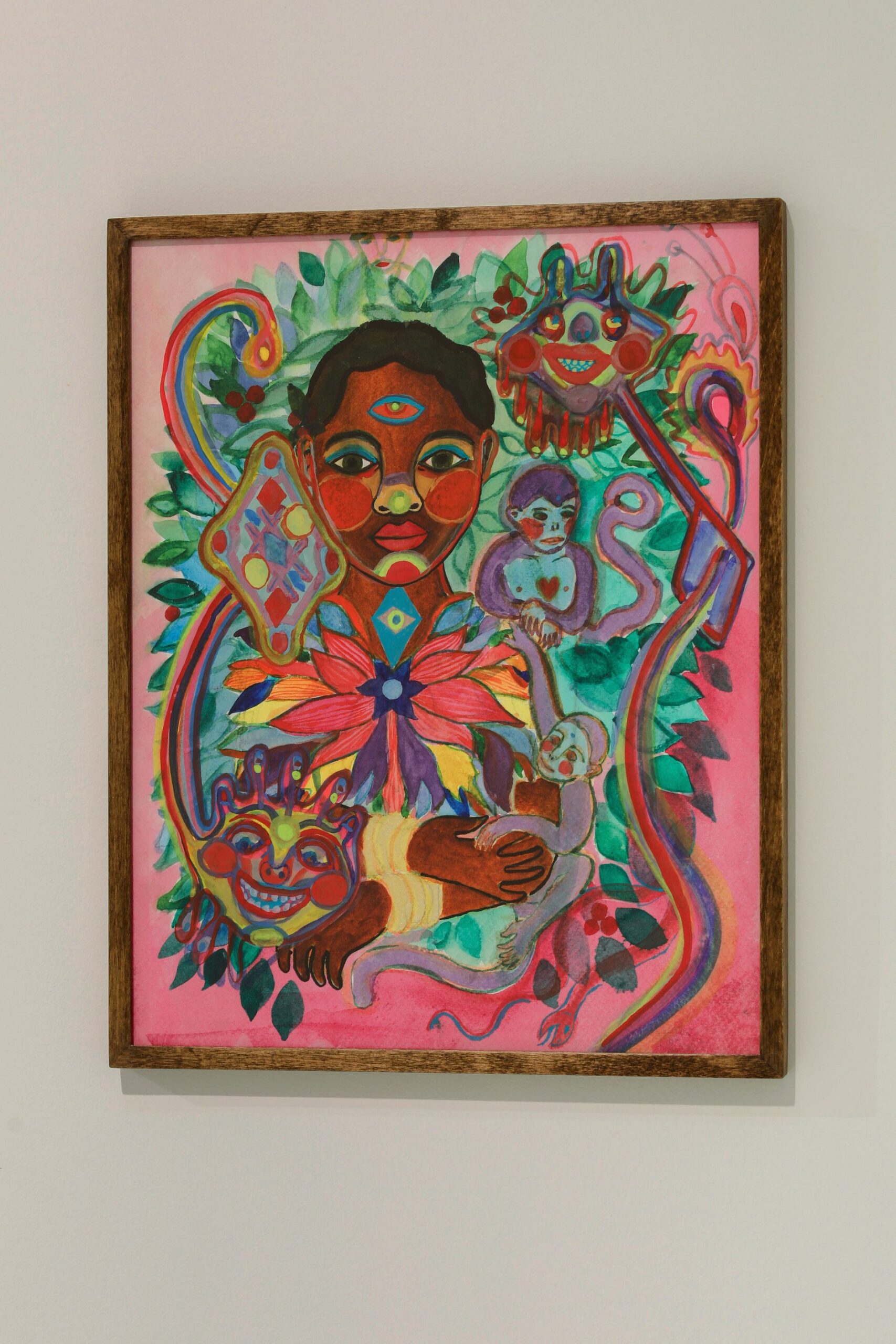 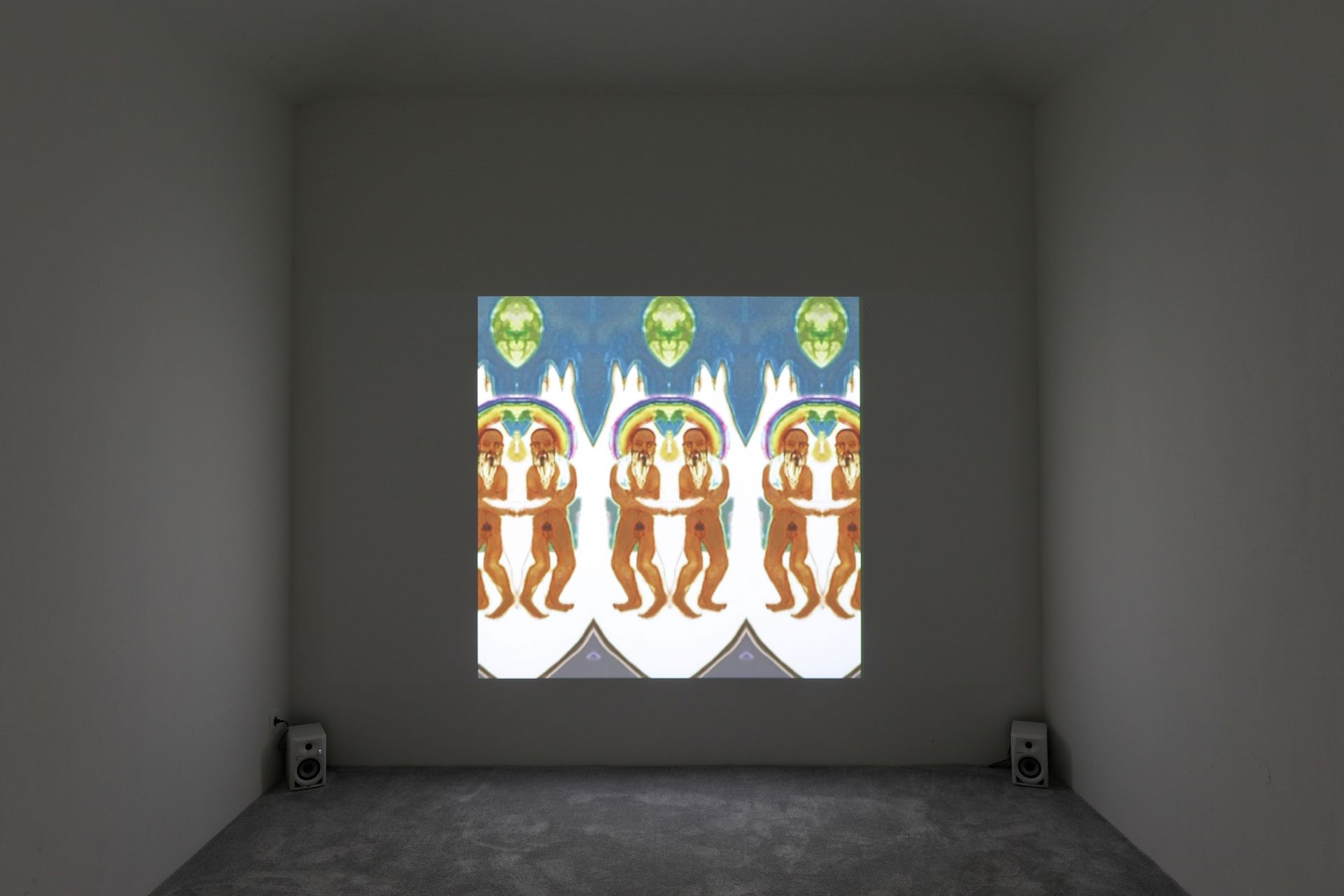 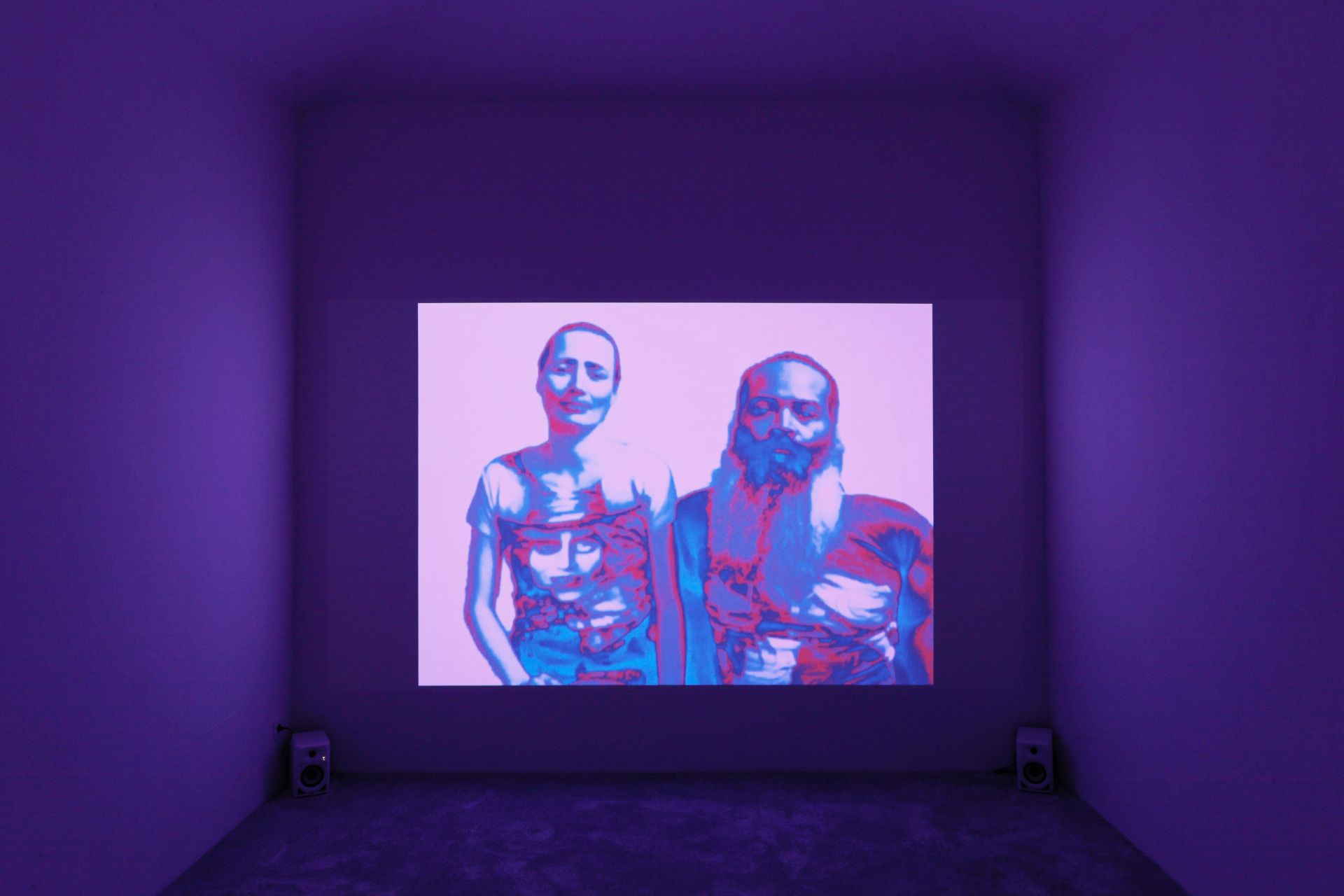 “Christ your pussy’s a miracle, gives me something to live for, when life’s sucking on chalk. You were there in your gold dress, easy winning the contest, me avoiding the cold death, with the hope of warm cock. Some song sung sweetly in love child (…)” sings Kyp in his candid video of domesticity and attraction, a psychedelic love song for Kris. A composite collage from Kyp’s library of hundreds and hundreds of short video clips, gifs and animated drawings, symbols and emojis is edited together with video effects and music. Most of the drawings in the video originate from cartoon characters from Kyp’s youth. He creates video pieces supporting a narrative without having to ‘talk it up’. By recycling the images and often repeating motifs and characters, he creates a kind of similitude, a connective tissue between his works linking his artistic and life path. And by thinking a lot about symbols, the rise of symbols like emojis and the online discourse which opposes words, he breaking down the image into further shapes and forms, he looks at a way of getting down to the elemental components of language.

Born into a situation when his ancestral traditions were not readily available to him, Kyp improvises with symbols and myths unbound by strict rules and customs in his visual works as in his music. He draws from imagery from his childhood alongside consciousness expanding experiences from his adult life where a prismatic nature reveals itself in some strange holographic ways. Almost as if he were creating a self-portrait, he intuitively depicts his animal archetypes transforming and returning in the course of his life. The drawings express his belief in animism, where everything is being imbued with soul and gifted with intelligence, an energy that wants us to create and manifest.  And it claims more space in this difficult moment. It is a voice of potential healing that needs more ears and more hearts and that is why it is finding its way to so many people. Away from despair and nihilism, he projects his utopian visions proposing other possibilities and envisions another way forward for us as a species and all the species we are entangled with.

In the drawing Dreaming Ancestors the artist depicts family and lineages, epigenetics and ancestral traumas. The drawing refers to Kyp’s spiritual heritage of the Yoruba religion, where ancestors are honored, sustained and revered. He envisions them being in the dusty halls of slumber and gives them some creative form – feeding them through painting and drawing. The faces appearing in Kyp’s drawings oscillates between his own, his mother’s and his son’s.

At hunt kastner, Kyp is presenting a number of his gouache drawings made between 2016 and 2021. His art brut drawings seem as if they lack the need to be intelligible to the outside world and reveal his spiritual quest, investigation and a deep interest in mythologies. Kyp has also created a music composition that provides a sound space for the works in the exhibition.

“The fact that Kris’s life and art are very, very intertwined, that the prerequisite for her work is hidden in her passionate joie de vivre (cheerful enjoyment of life) is further amplified against the background of her era. And this may include both the ethics and aesthetics of the future, as well as wisdom of survival.” writes art historian and one of Kris’s closest friends Tamara Luuk in her exceptional essay Three Cheers for Our Joker, precisely interpreting Kris’s work.

Kris’s new ceramic sculptures entitled Moo-Pa and Moo-Ma in this exhibition are a continuation of the series immaterial material love she has been working on since 2008. Initially, the ceramic bowls served as a testing ground for the artist rather than being seen as the final piece. Encouraged by her friend Tamara to give attention to those objects which have already contained “her whole eventual artistic world”, Kris continued to build and assemble those overwhelming collages of casts (and casts of casts).

Two sculptures represent figures of a grandmother and a grandfather in a conversation. There is the figure of the grandfather with the attributes of a travelling musician and a grandmother in the role of a clown–trickster creating a fantasy of two worlds, both very ‘freedom demanding’ and coexisting much like Kris and Kyp.

The sculptures seem neither from the past nor from the future but rather feel as if they are of someone who has existed and will exist again and again and again.  The entirely ceramic sculptures consist of only casts – the artist’s mother’s legs that slipped out from oversized clown’s shoes pointing upwards, infected by an overgrowth of Romanesque broccoli and diving into a skeleton of spine and ribs surrounded by toys of clown’s heads, ice cream, intestines, and wings among many other things – is placed on plinth covered with Kyp’s drawings printed on textile.

Like an infinite swirl that pulls in all substances equally into doom, all the objects and materials in Kris’s work are combined together without hierarchy. The objects (other than the ceramics) that Kris uses in her sculptures and installations are loaded with personal history and bring to the fore her whole story, a very visual and sensual memory, acting as a way for the artist to remember the past.

Dressed up in costumes with a painted face, Kris often becomes part of her sculptures, poses for photographic self-portraits, appears in performances and openings, and (when the sun goes down) sometimes also in social situations. Her ever-transforming appearances oscillate between mummery and high-end fashion, provoking an inner laughter, uncovering the absurdity and ridiculing the whole situation. Costumes can change one and enables the inside to be displayed on the outside. It is a shield giving protection and at the same time attracting, luring and seeking to meet people. It has become part of her life and one of the ways she operates and communicates.

Kris and Kyp form a family and have been collaborating since 2017.

They have created the performances Going, going (Performa 17, New York, 2017) and Birth V – Hi and Bye (Estonian Pavilion, 58th Venice Biennale of Art, 2019) and the exhibitions Love Song Sing-Along (KW Institute for Contemporary Art, Berlin, 2020), Love Song Sing Along (Once Again With Feeling!) (Kai Art Center, Tallinn, 2020), and Going Going (Den Frie Center of Contemporary Art, Copenhagen, 2020).
In addition to their cooperation in It’s a Family Affair at hunt kastner they will also be working together on the performance A Snail’s Tale (The High Line, New York, September 13, 14 & 15, 2021) on a piece for the exhibition ECLIPSE (7th Athens Biennale, September 24 – November 28, 2021).

Kyp Malone (b. 1973 in Pennsylvania, USA) is best known as a multi-instrumentalist, composer and member of the music groups Tv on the Radio, Iran, Rain Machine and Ice Balloons.

Kris Lemsalu’s (b. 1985 in Tallinn, Estonia) work has been presented in the Czech Republic continuously since 2010. She collaborated with the Gelitin group in the exhibition Reality Check (Šaloun – The Studio of Visiting Artist at Academy of Fine Arts in Prague, 2010). She participated in group exhibitions Ephemeral Self – Finite Projections (NTK, Prague, 2013), Metamorphosis (SVIT, Prague, 2017), ESTER KRUMBACHOVÁ. Yeti – Wear the Amulet – Tangle Up the Archive (transit display, Prague, 2017/18). She presented herself independently at the exhibitions Fine with Afterlife (Ferdinand Baumann Gallery, Prague, 2015) and the currently ongoing Lazy Flower (PLATO Ostrava, until October 24, 2021).

This exhibition is part of the SUMO 2021 program. Special thanks go to Are | are-events.org, The Emblem Hotel, Temnikova & Kasela, MeetFactory, and Zuzana Blochová for their help and cooperation. We would also like to thank the Ministry of Culture of the Czech Republic and the City of Prague for their ongoing support of our program and the visual arts in the Czech Republic.