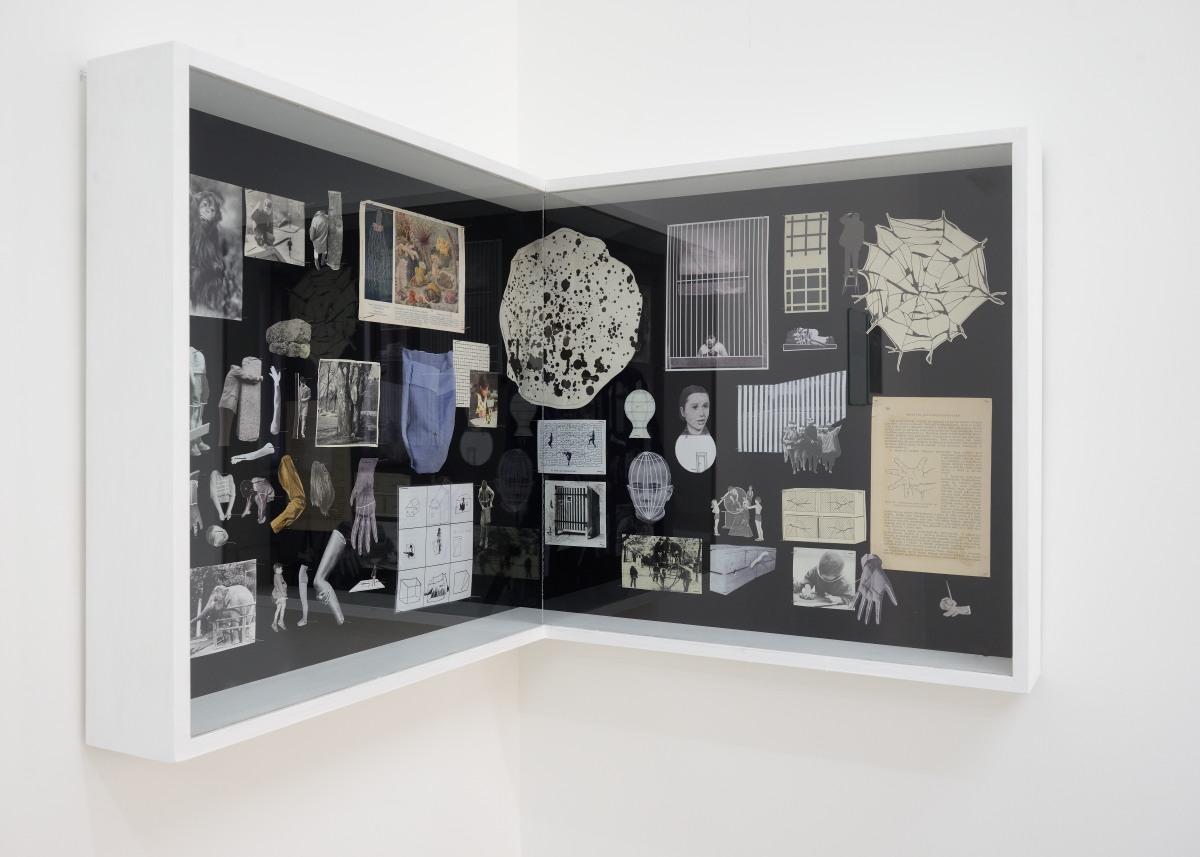 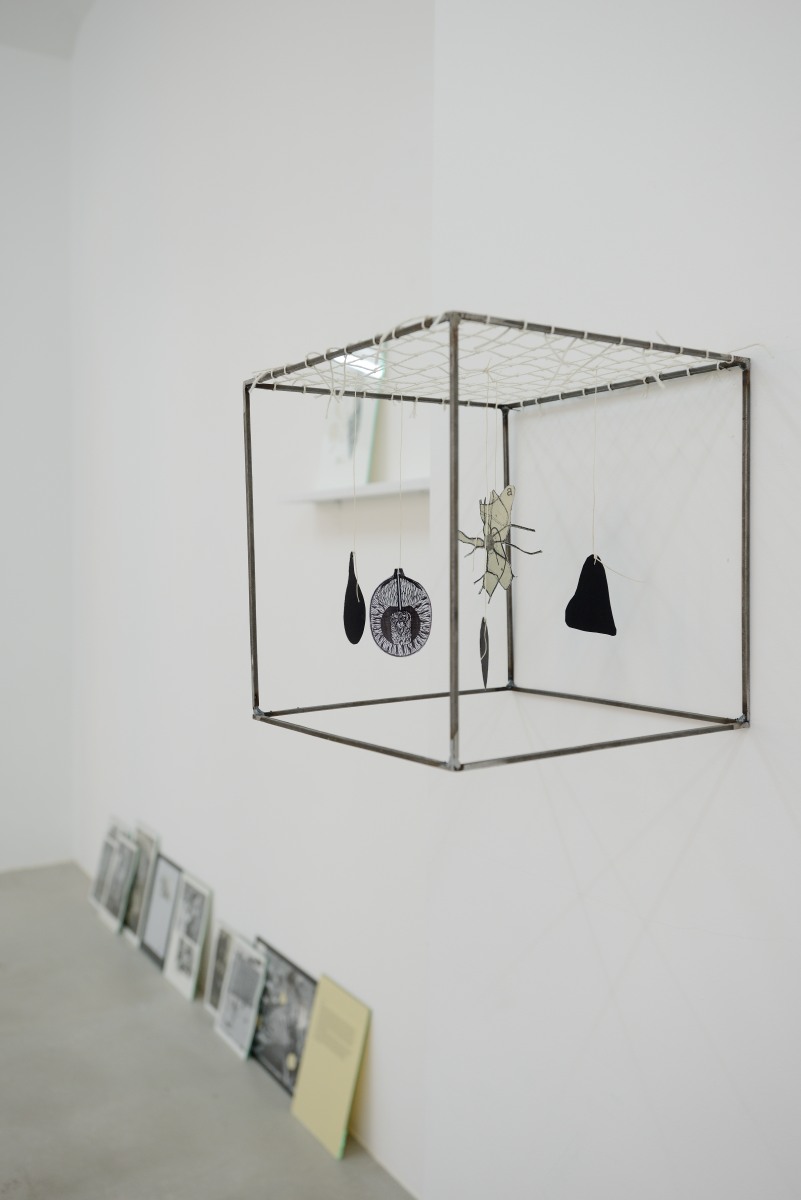 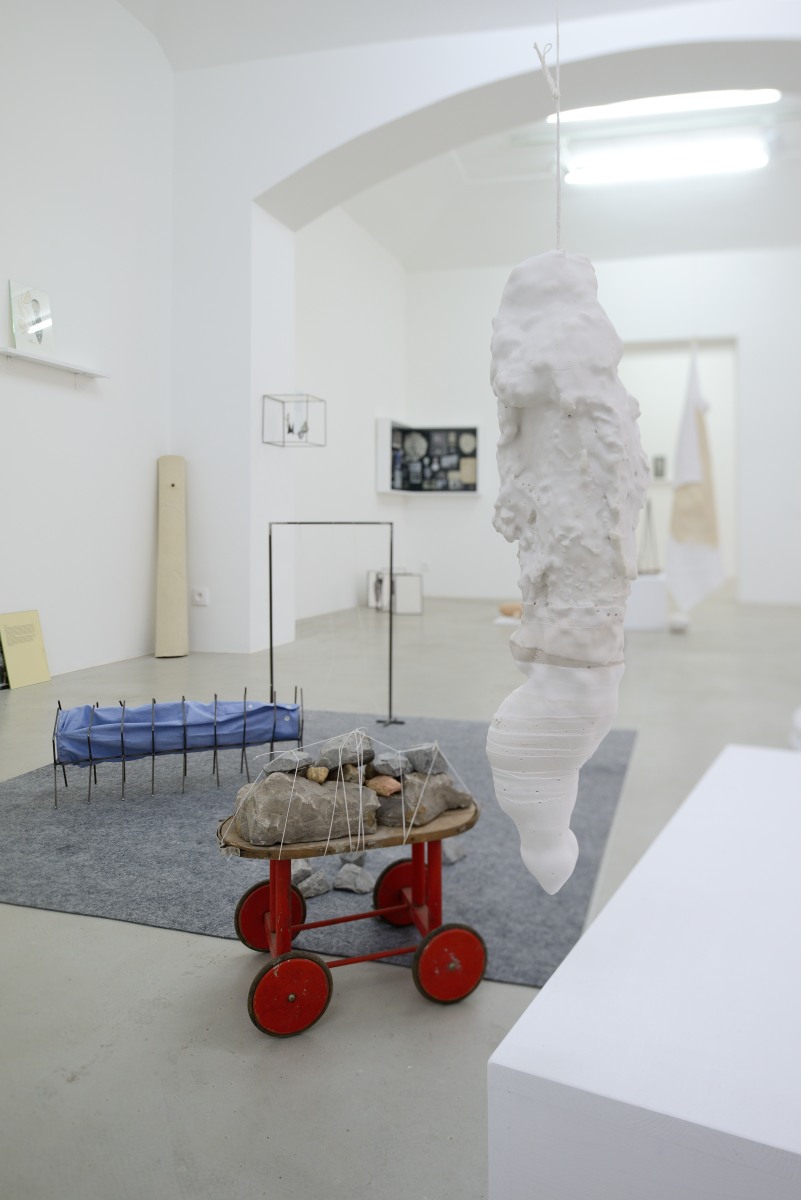 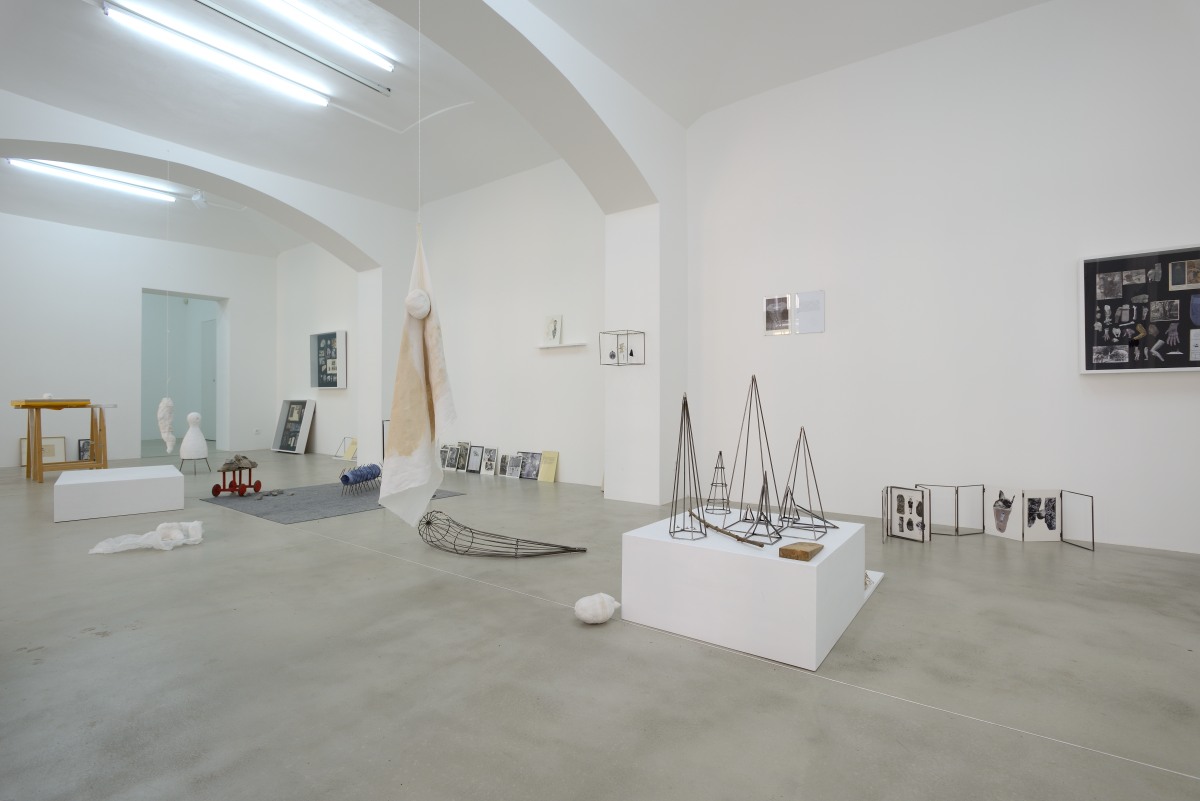 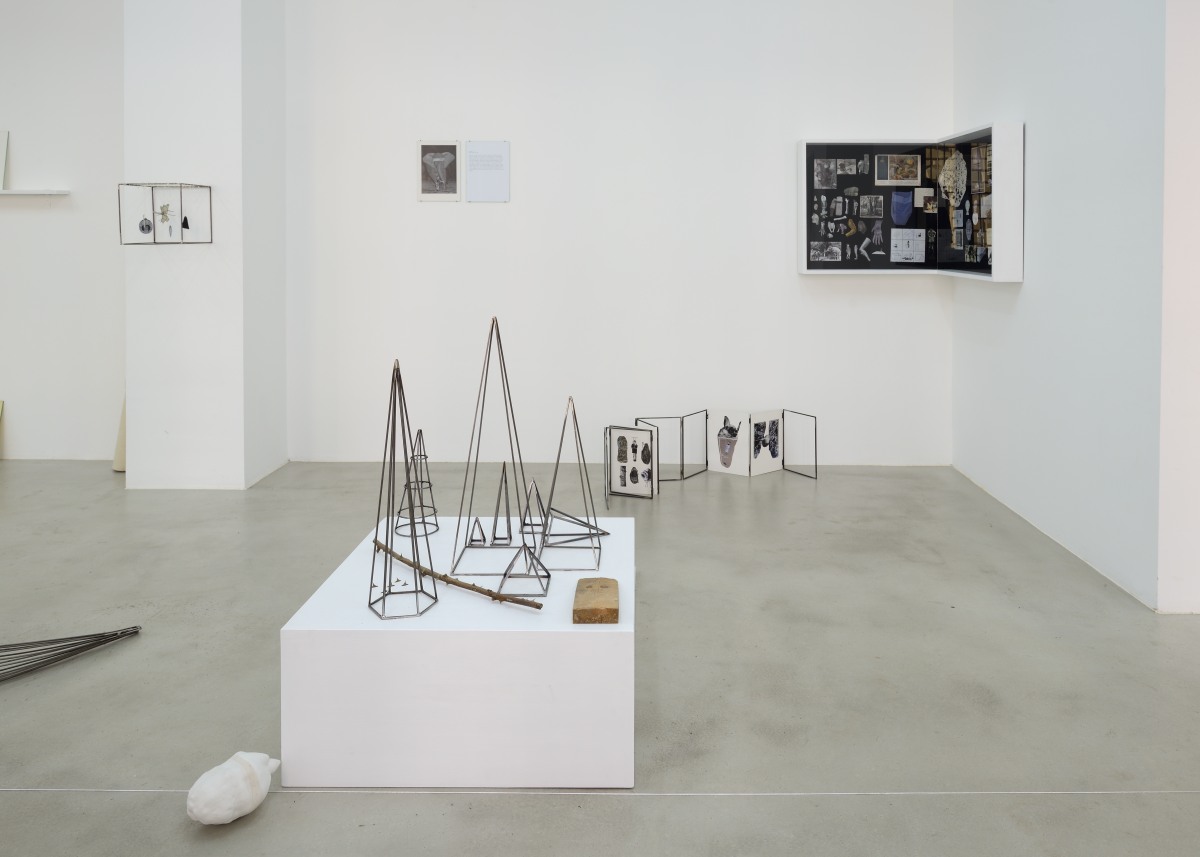 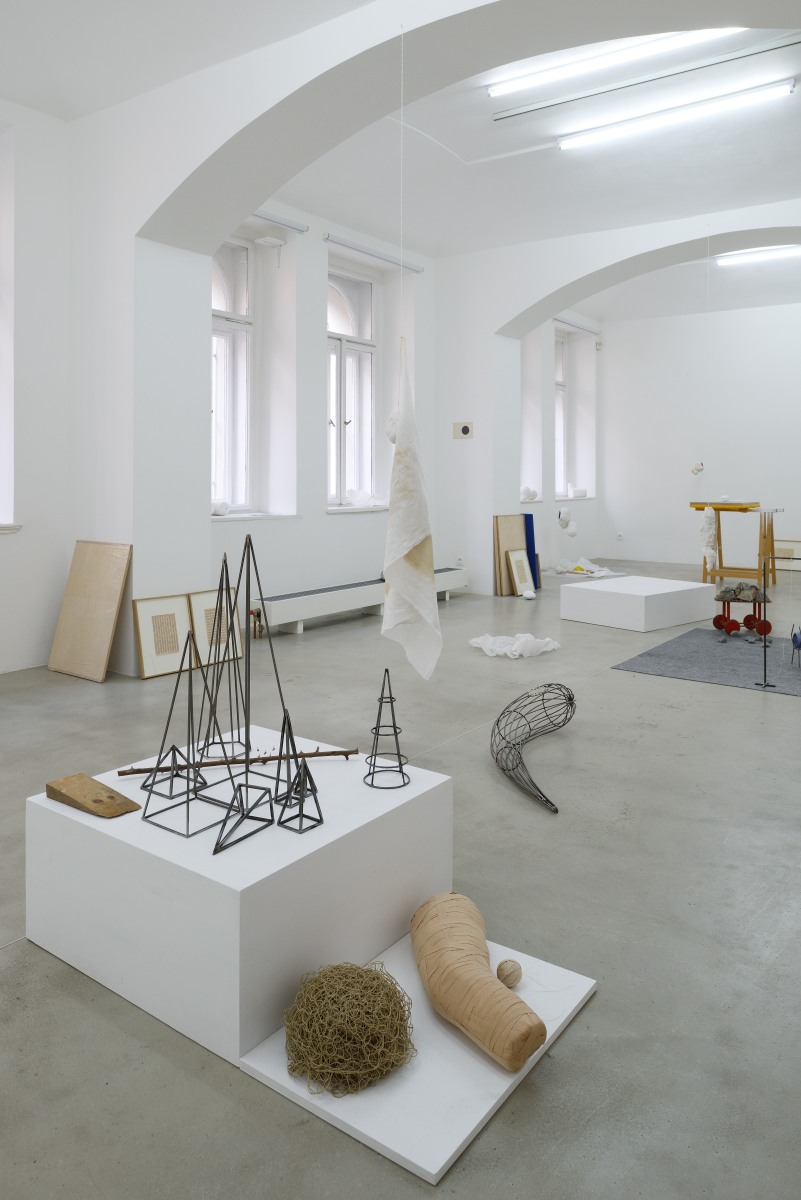 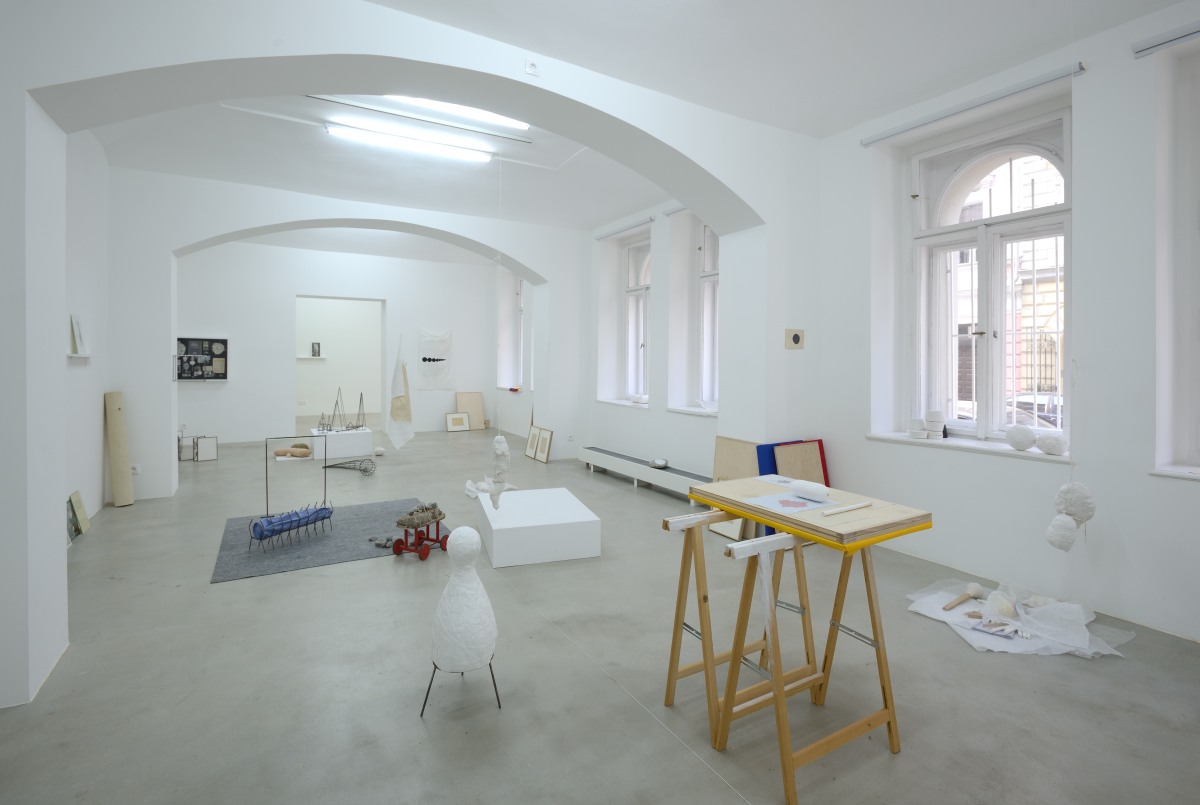 hunt kastner gallery is very pleased to present a cooperative exhibition of new work by Eva Koťátková and Denisa Lehocká.  Eva Koťátková invited the Bratislava-based artist to participate in her second exhibition at hunt kastner gallery in Prague and the two artists have come together to work in the gallery space to create a joint installation that includes a series of sculptural works, collages  and work on paper. The artists chose the mathematical symbol for an infinite line as the title for their exhibition – represented by a white string running along the floor for the full length of the gallery space. This open-ended trajectory, with no beginning and no end, could also be a symbol for the open-ended creative dialog that goes on between the work of these two very talented artists.

Eva Koťátková and Denisa Lehocká – two artists separated by an entire artistic generation – did not know each other before this, their first joint exhibition. Their collaboration is thus an experiment that can take any direction. The exhibition was not predefined in any way – the most important thing is not its outcome, but the fact of the artists’ encounter within four walls and the process of communicating through objects in space. The gallery is symbolically bisected by a white string that both separates the two artists while also bringing them together – on the one hand, the objects are mixed together (i.e., they can be found on both sides); on the other hand they remain distinct. The resulting space is not a self-enclosed whole, nor is it two separate sections; it is two distinct voices within one poem that is more of a fragment or excerpt, without beginning or end.

How do Lehocká’s delicate and abstract objects and sketches communicate with Koťátková’s oppressive archive of repressed social pathologies? What happens to the openness and unsettling unfathomability contained in the work of one of the artists, and the sense of anxiety emitted by the stories of the other? Which side will dominate? Or is the result something completely different? Hard to say. I nevertheless believe that, in this constellation, we can discern something like a common voice. Both artists directly or indirectly express a lack of faith in the socially predetermined norms and codes that we are forced to use when communicating in our everyday lives, and show a passionate interest in what this language pushes aside. Their work addresses the freedom to speak in manner different than what is socially acceptable and comprehensible. Where both artists speak of a shared obsession with objects, the silent symptoms of neurosis sometimes offer a more truthful language for describing the state of the world.   (Tereza Stejskalová, March 2104)

Eva Kot’átková (born 1982, Prague) studied at the Prague Academy of Fine Arts, Prague Academy of Applied Arts, San Francisco Art Institute and Akademie Bildende Kunst Wien from 2002-2007. In 2007 she became the youngest artist ever to be awarded the Jindřich Chalupecký Award for young artists in the Czech Republic. She has exhibited in the recent international exhibitions of Venice Biennale (2013), Moscow Biennale (2013), Sydney Biennale (2012) and Lyon Biennale (2011), as well as making solo exhibitions at Modern Art Oxford and Kunstverein Braunschweig in 2013, amongst others.

Denisa Lehocká (born 1971, Trenčín) studied at SUPŠ in the of Atelier of Textiles led by Karol Pichler, as well as at the Bratislava Academy of Fine Arts in the Open Atelier of Rudolf Sikora.  She has exhibited extensively both at home and abroad, including her monographic exhibition at the Slovak National Gallery in 2012, that was accompanied by a lecture by the Vienna-based curator Ruth Noack entitled “Who is Afraid of Denisa Lehocká?”.