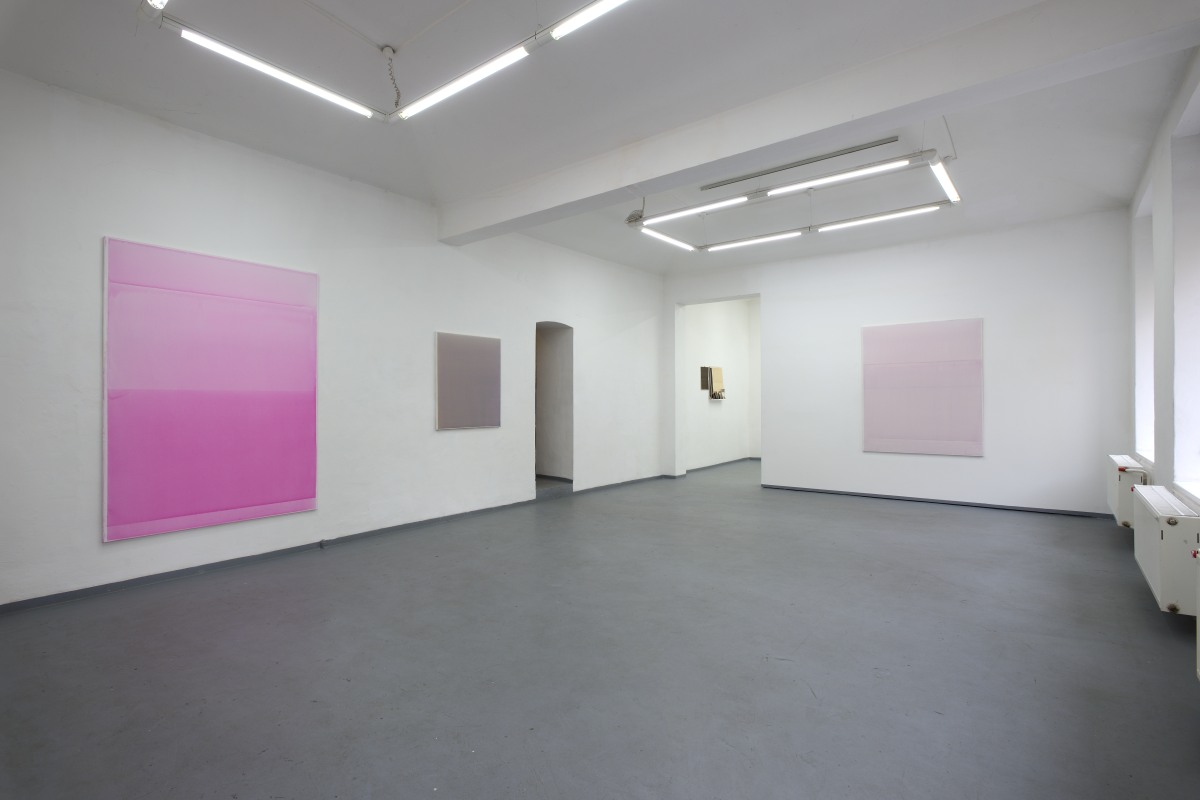 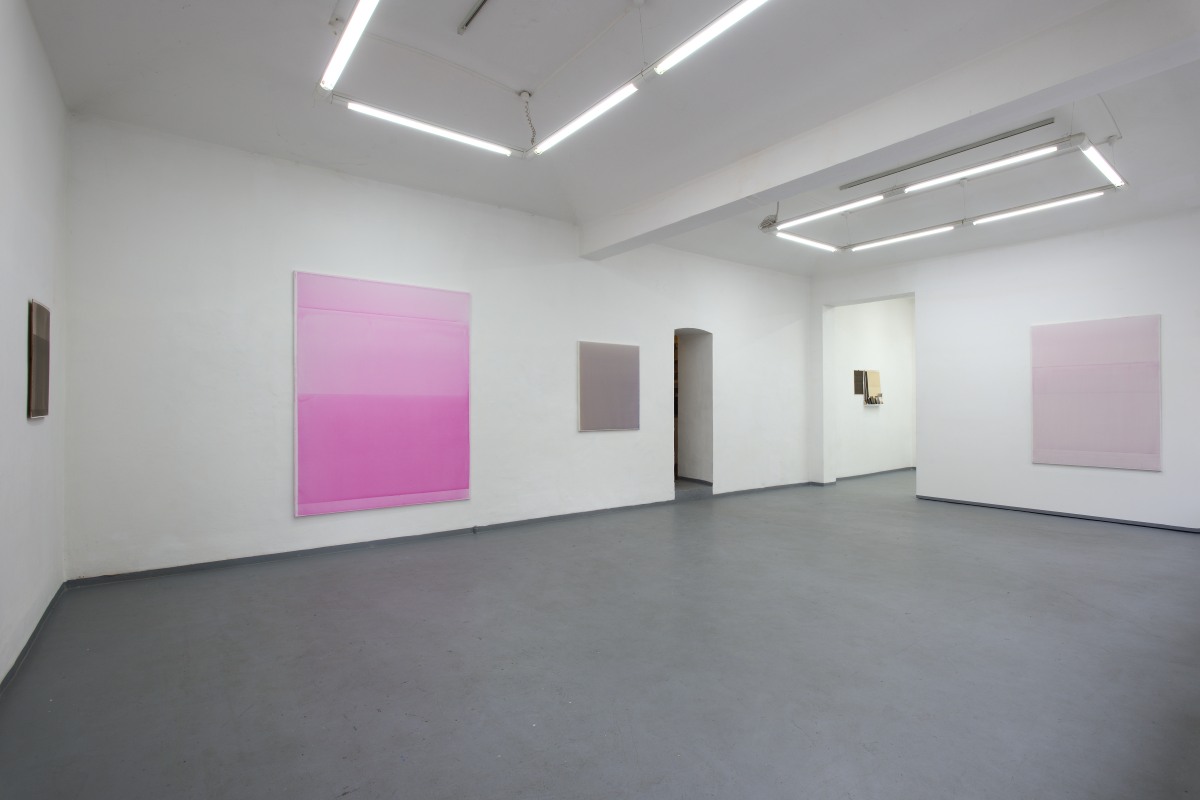 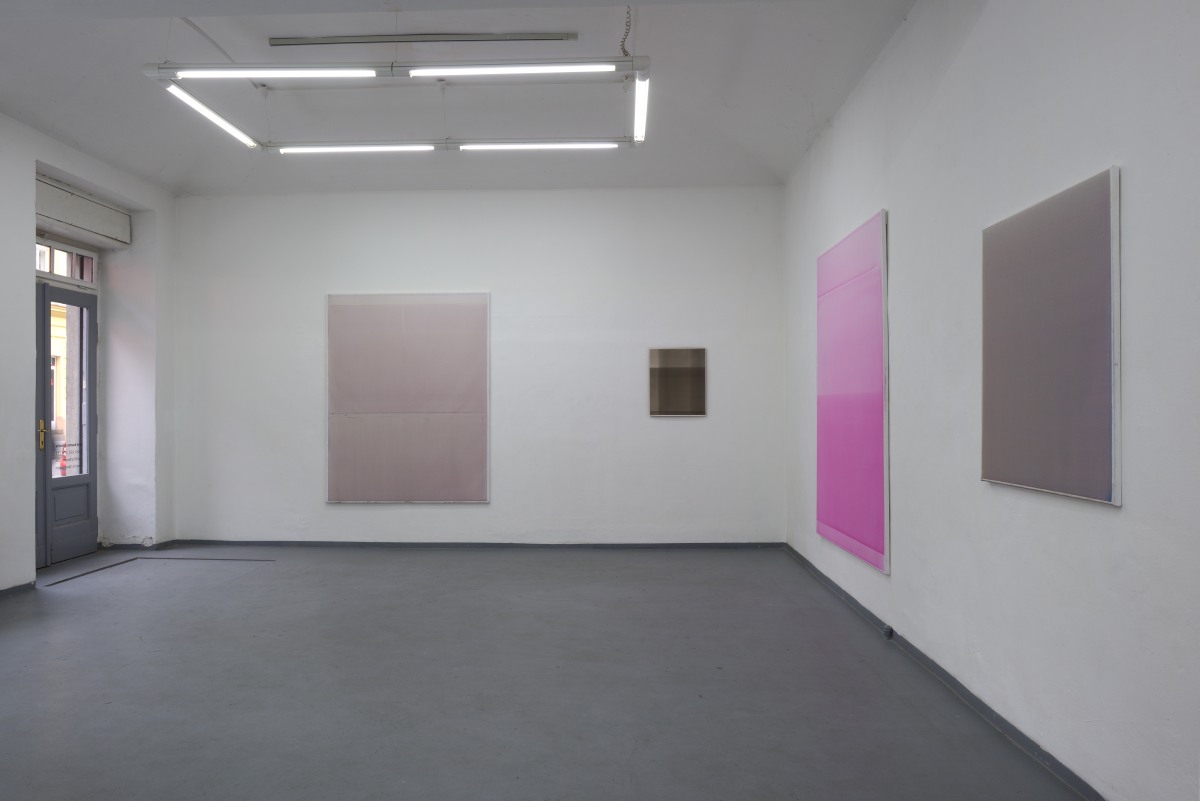 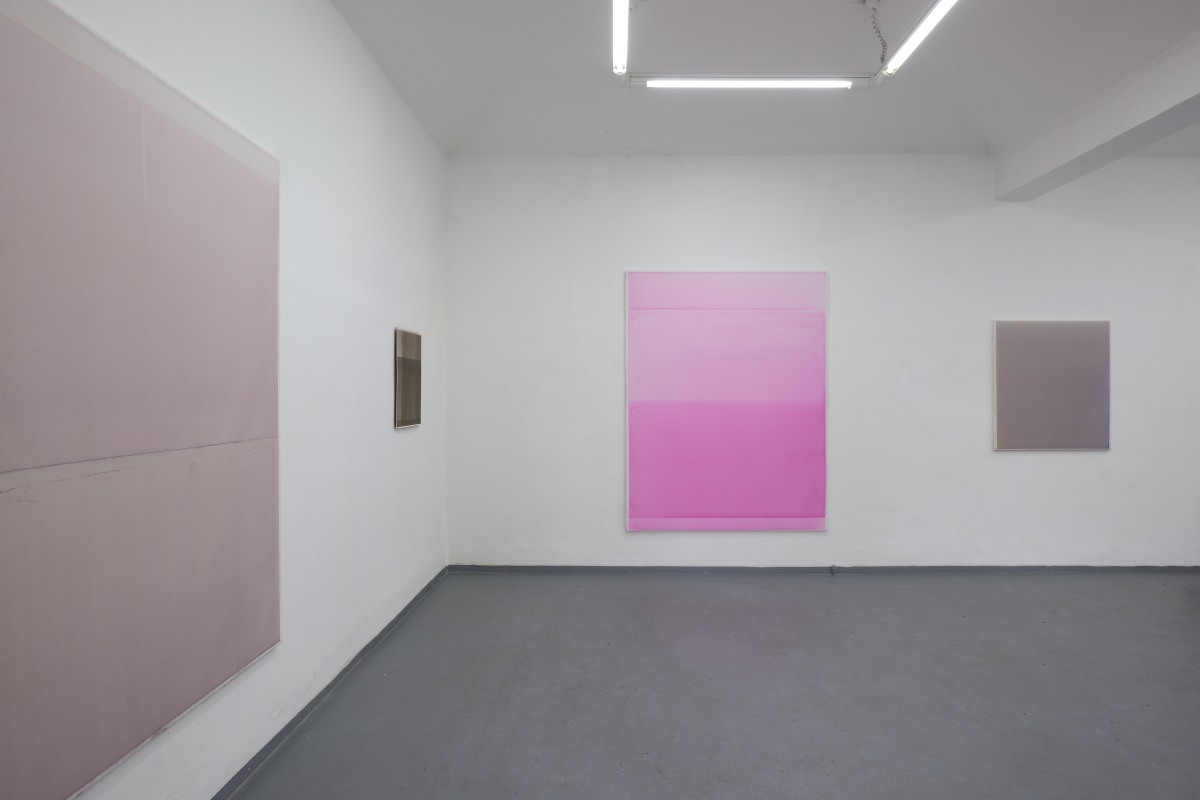 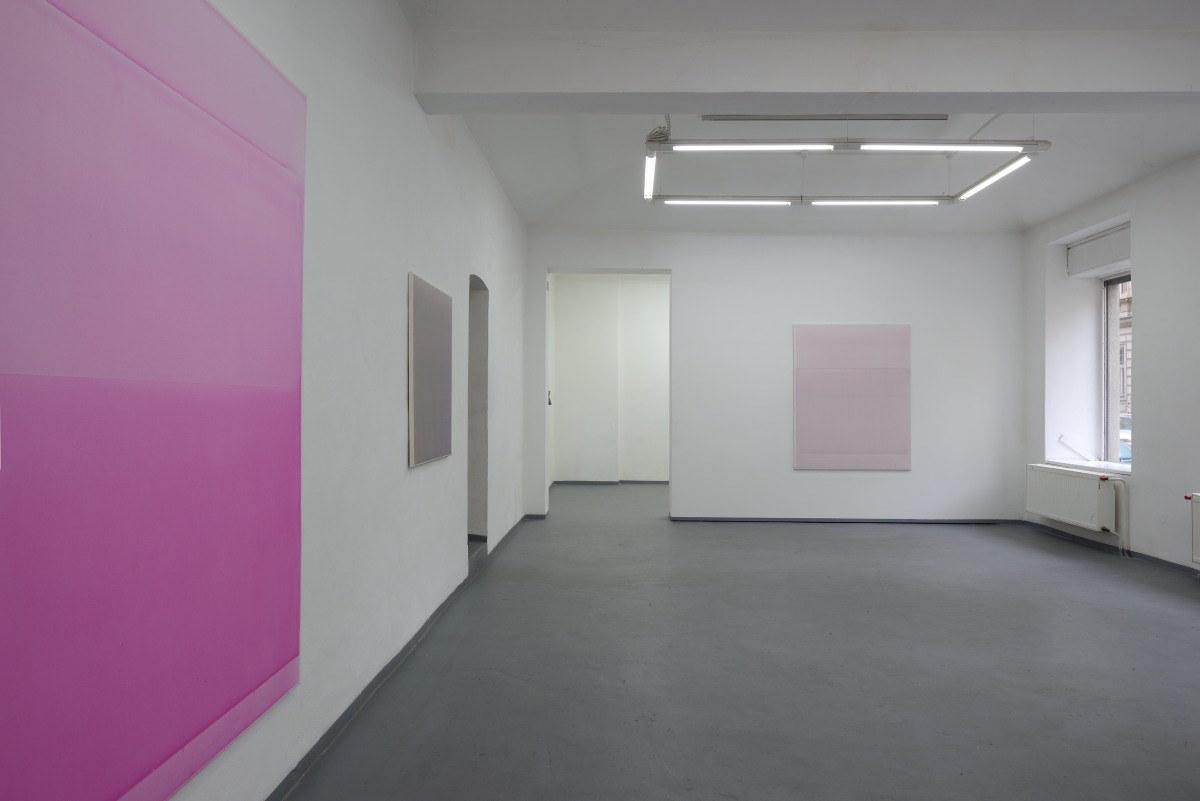 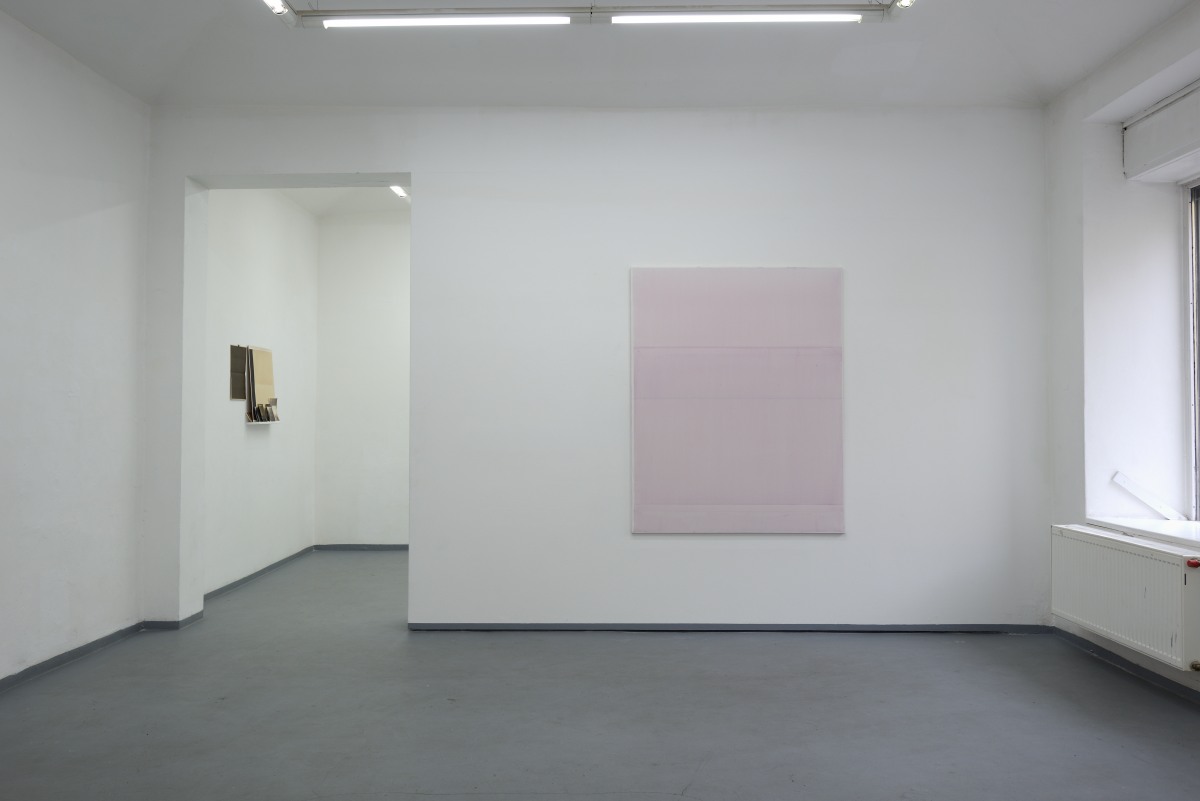 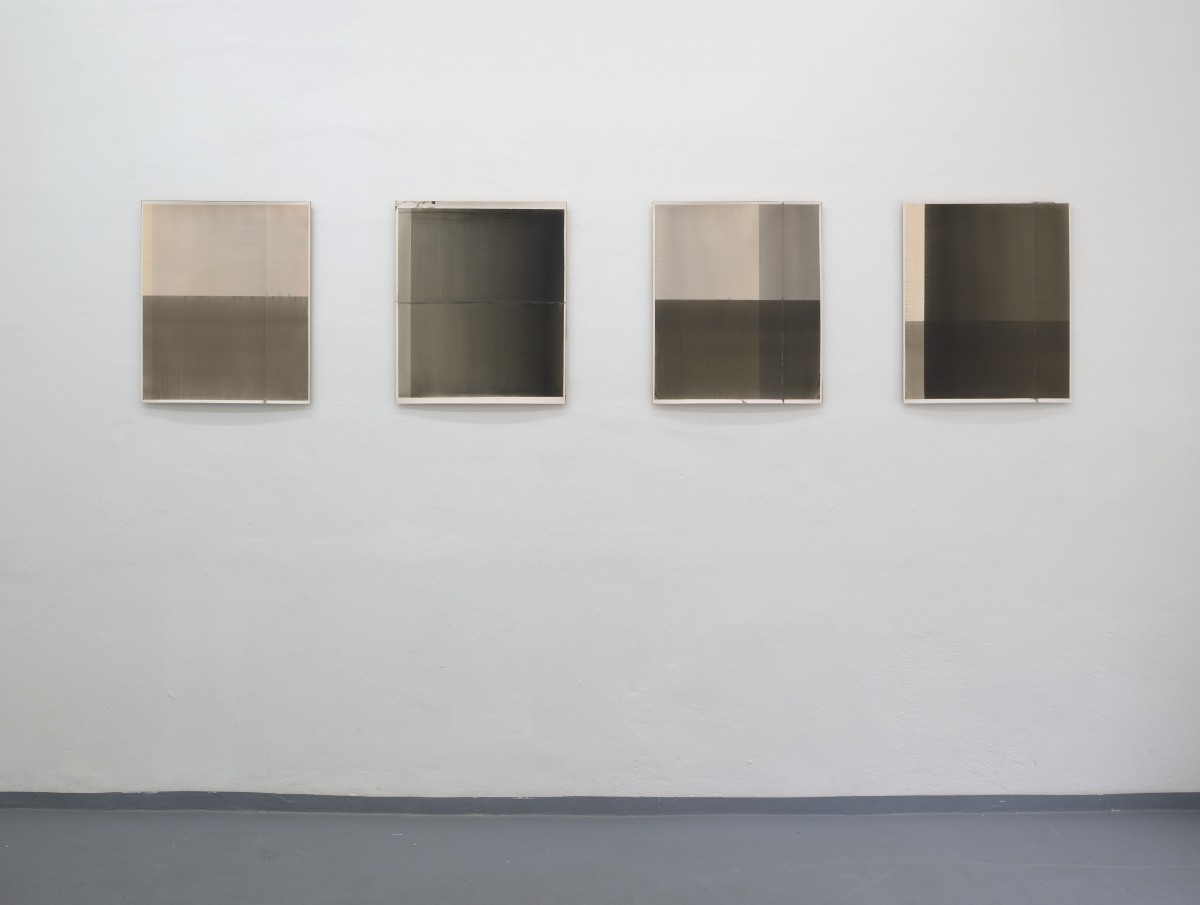 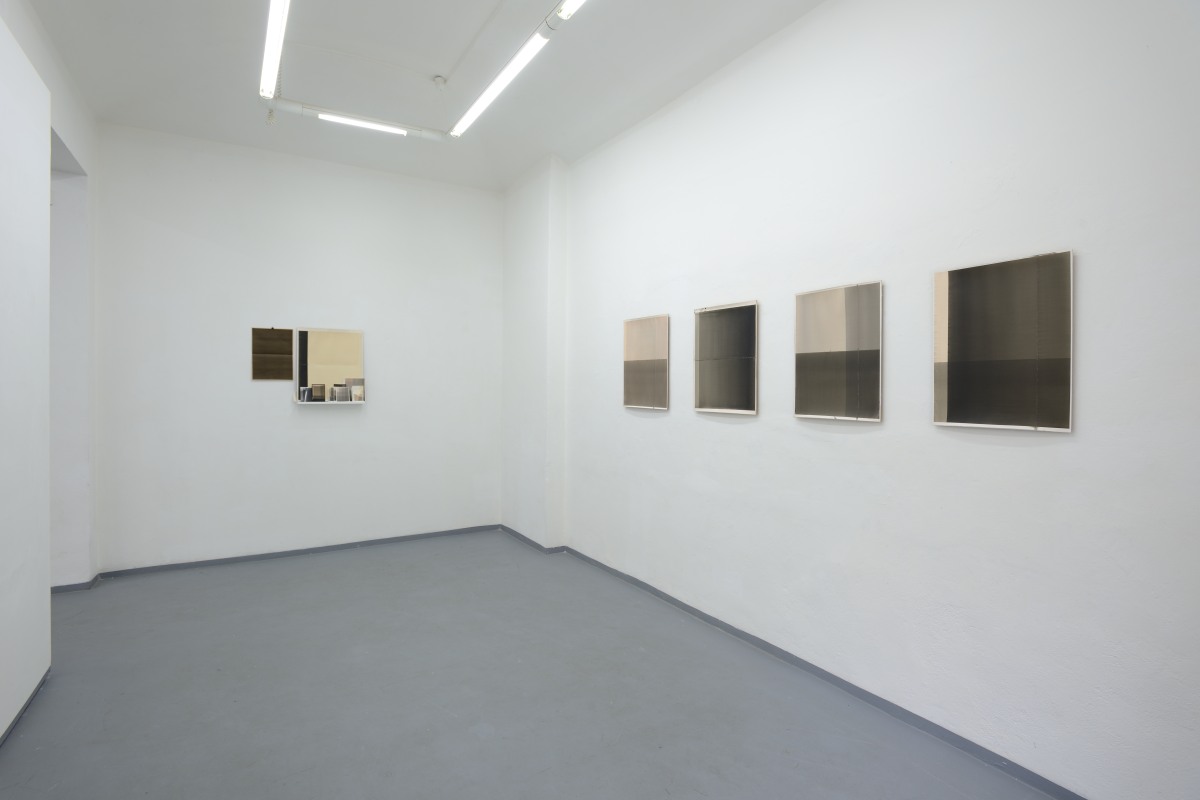 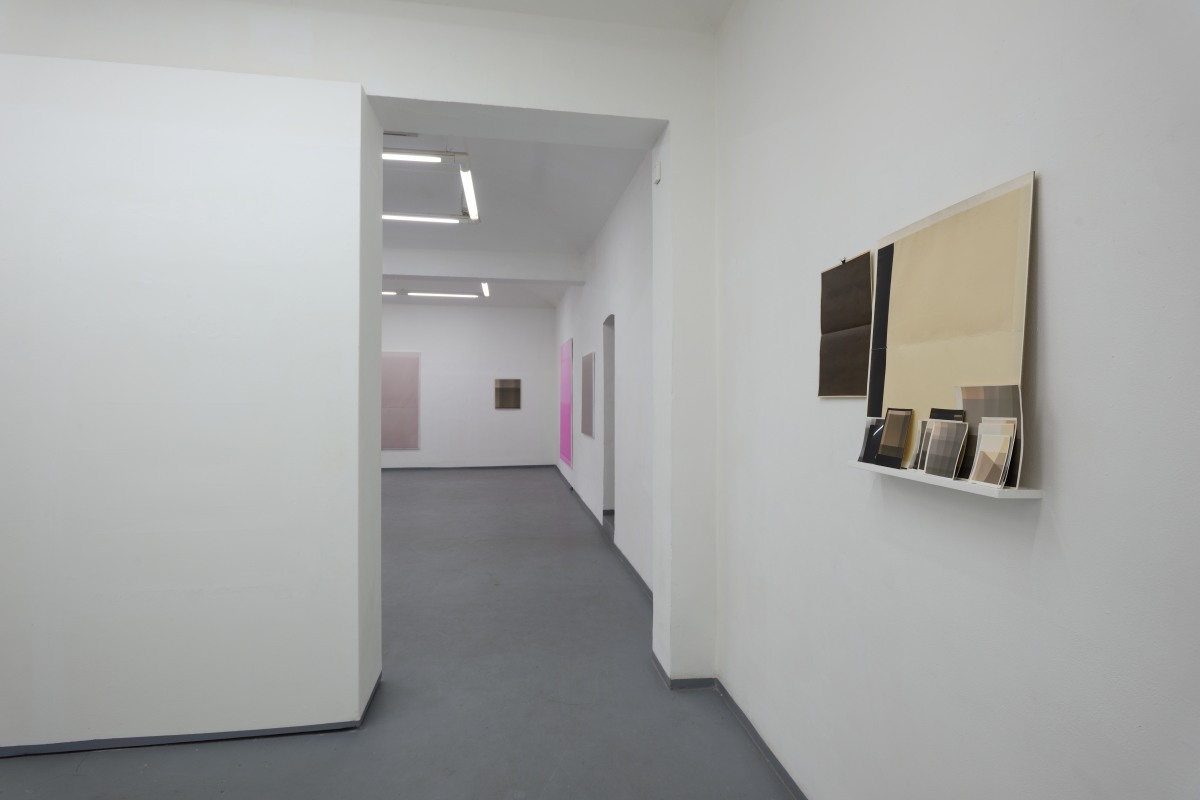 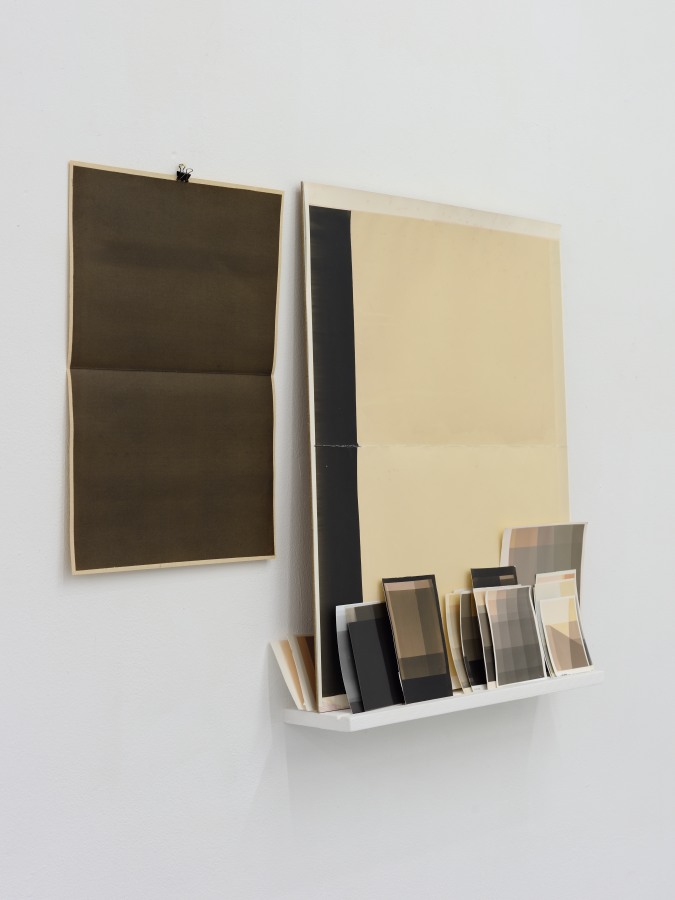 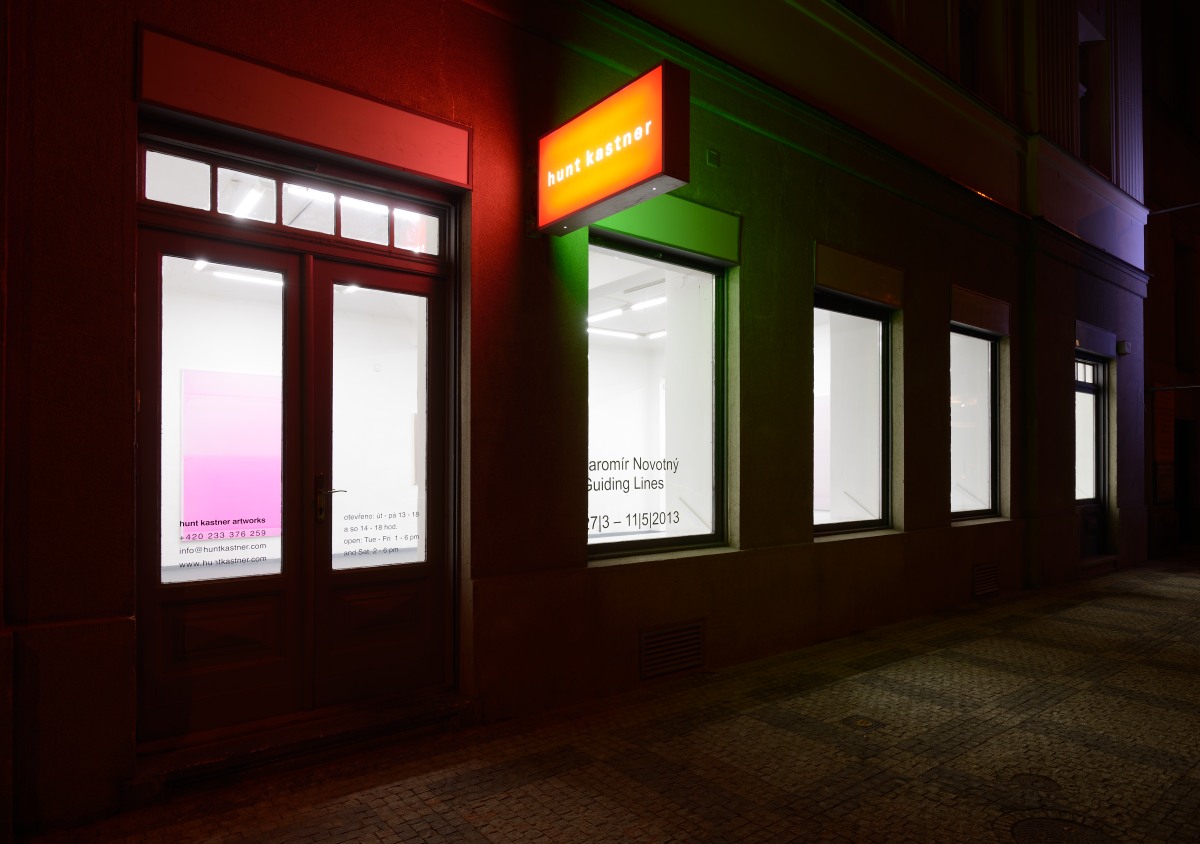 hunt kastner is pleased to present a new series of paintings and works on paper by Jaromir Novotny from 2012-13.  In abstractions that accentuate the process of creation, the artist uses basic techniques connected with nature of the material (the running and bleeding together of colors from flowing paint,  folds in the paper, the darkening of photographic paper as it is exposed to light), as well as their transposition elsewhere (painting with emulsion, folding the canvas, the color of photographic paper transferred to painting). In contrast to his previous work, which worked mainly with the vertical, this new series of works introduces a horizontal focus, or a combination of the two. The artist says:  „The title of the exhibition ‚Guiding Lines‘ refers in a way to my idea about the movement in the actual ‚compositions‘ – about the movement of the guidelines, which shift from the edges over the surface of the painting, catching your sight and guiding your eye.” Although striking colour is sometimes used (e.g. Magenta, 2013), this is not so much a great departure from his previous monochromatic, almost pure black and white combinations, as he continues here to work with another type of pure ‚non-color‘ – e.g. the primary CMYK (cyan, magenta, yellow, key) ink colors used in the printing process.

Jaromír Novotný is once again reassessing the classical potential of the transformation and the isolation of the media of painting from the practice of imagery, and yet his work is still full of surprises. This artist develops his work in cycles, where the carefully composed scores always seem, to me, to be only a temporary solution rather than something incomplete. At the same time, I am fascinated by the strength of the sensuality in his work, such as the boldly tactile traces or objects up close – in particular in his current work on paper. Because of the specific format, the painting technique, the purist abstract thinking, as well as his remarkable ingenuity in installation, it is possible to perceive Novotny’s paintings, above all, physically.  This consideration, given the current form of contemporary Czech painting, is in itself revelatory.

Jaromir Novotny’s most recent exhibitions, including this current one, introduce the result of his ongoing reflection.  I personally find this, in the best sense, extremely provoking. In part, the artist remains completely indifferent to the possibilities of any imagery. Everything basically happens in the tightly packed vacum of the closed surface; there is no chance of anything unwanted seeping in from the outside.  And just as importantly, the intentionally broken connection goes hand in hand with his relatively intense work method.   Jaromir Novotny is able to fulfill an exceptional assumption: that the painted or photographic resolution of the image can be seen as a completely communicable and appealing gesture, even when everything is done in the name of the desire not to show anything. For a painter, or a photographer, it seems to be a pleasant task to be able to meticulously express this apparant paradox as he does here, with a sense for maximium detail.

Novotný not only works with the symbolic media of painting as many other artists already do, but he is interested in the actual special nature of the material – the essance of the preparation for painting, the history of the working method, the principals of chance, or the quality of the technological defects.  While many others have also found this an attactive region to explore, Novotny, in contrast, quite openly and deliberately keeps a close watch on the fairly strict evaluation critera about how a painting should not look. His careful supervision eliminates everything that could be considered redundant due to semantics or it’s decorative, visual information. The artist prefers to rely on the repeated constants of psychological perception and a minimum of expression, whose form, as can be deduced from the title of the exhibition, determines the technological logic and compositional deduction. Even if it is not apparant at first glance, Novotny works both very intensively and effectively with color, respectively with it‘s automatic derivatives, such as in the form of adopting the black and white tones of photograpy, or the use of standard printing ink colors. His spectural light drawings – photograms –  have a pure painterly character.  They  are created through the even exposure of photographic paper in the developing emulsion bath; you can even see where the photograhic paper has been folded to accommodate it in the relatively small developing tray.     Michal Pěchouček

Jaromir Novotny (*1974) studied at the Academy of Fine Arts in the Studio of Drawing under Jitka Svobodova and the Conceptual Art Studio under Milos Sejn. Over the past almost ten years his work has moved in the space between the painted image and a reduction of near abstraction, or between the filling in and the taking out.  Since 2009, his work could be described as abstract.  In the large format, he works mainly with monochrome surfaces, matter and transparency.  His most recent exhibitions include Visible Formats at the Prague City Gallery, Old Town Hall (2012), or KOLUMBA Kunstmuseum des Erzbistums Köln (2012).

Our 2013 exhibition program is supported by the City of Prague and the Czech Ministry of Culture. Thank you!