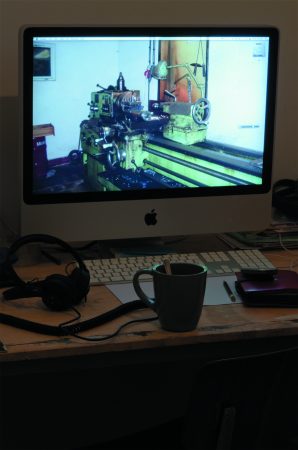 jiri skala, from the two families of objects, hunt kastner, 2007

Jiri Skala, from the Two Families of Objects, hunt kastner, 2007

Jan Boublík had been employed as a grinder at Škoda Klatovy from 1977 until 2005. In 2004, he purchased a circular saw sharpener from the factory where he had worked for 28 years.

Jiri Skala, from the Two Families of Objects, hunt kastner, 2007

Jaroslav Stupka had been employed in the logistics department at Škoda Klatovy from the late 1970s until 1992. In 2006, he purchased a universal lathe from the factory where he had worked for close to 15 years.

jiri skala, from the two families of objects, hunt kastner, 2007

Jiřina Skálová had been employed as a lathe-hand at Škoda Klatovy from 1968 until 2006. In 2001, she and her husband Jaroslav Skála purchased the universal lathe on which she had worked for 22 years.

Josef Malát had been employed as a technician at Škoda Klatovy from the early 1960s until 2003. In 2000, he purchased a universal lathe from the factory where he had worked for close to 40 years.

A project photographed by: Jaroslav Skála, Jiřina Skálová, Jindřich Boublík, Josef Malát, Václav Suda, Jiří Stupka, Jaroslav Zítek, Štefan Kadlec, Václav Touš, Oto Hušťá and Jiří Skála.
hunt kastner artworks is pleased to present a solo exhibition of new work by Jiří Skála. The
exhibition, inspired by and named after an essay written by Umberto Eco after visiting the Milan Trade Fair in 1970, is made up of a series of color photographs (50×40 cm), photographed according to the artist’s instructions, by some of the former employees of the bankrupt Škoda Klatovy factory in Southern Bohemia. What the authors of these photographs all have in common, in addition to having worked at the same factory over period of many years, is that they also purchased for their own use a piece of equipment sold off by the
company in a futile effort to cover its mounting debts before it finally closed down in 2005. Skála’s mother, for example, received the turning lathe on which she had worked for close to 30 years, as a present for her 50th birthday from her husband in 2001.

The people in Skala’s project – in contrast to the Milan Trade Fair visitors as described in Eco’s essay – desire these “ugly” objects; tools from the old socialist economy that has become obsolete, but which still retain a value for those who employed them. In this project, Skála draws parallels to a situation described by Eco over 35 years ago to the contemporary situation in Central Europe, where the chapter on the economic transformation from a strict socialist to a liberal capitalistic system is gradually coming to a close.

The objects are of two types. The first are the “beautiful” objects desirable, fairly accessible. These include easy chairs, lamps, sausages, liquors, motorboats, swimming pools. The visitor loves them and would like to own them. He cannot perhaps own a motorboat, but he thinks of the remote possibility – one day, who knows? – of making such a purchase… Then there are the others. They are “ugly” because they are cranes, cement mixers, lathes, excavators, hydraulic presses (actually, they are very beautiful, more so than the first but the visitor doesn’t know this). Since they are ugly and cumbersome, they are undesirable, also because they seem strangely defunctionalized, with their wheels spinning pointlessly, their blades striking the air without slicing anything… They are inaccessible, but the visitor doesn’t care. He knows that even if he could buy a machine tool, it would be of no use to him. Because these objects, unlike the others, function only if they are accumulable. At the end of his rounds, the ordinary visitor believes he has chosen. He desires beautiful objects,
accessible, and not accumulable, and rejects those that are ugly and accumulable (but inaccessible). In reality, he has not chosen, he has only accepted his role as a consumer of consumer goods since he cannot be a proprietor of the means of production. But he is content. Tomorrow he will work harder in order to be able to buy, one day, an easy chair and a refrigerator. He will work at the lathe, which is not his, because (the fair has told him) he doesn’t want it. Travels in Hyper-reality: Two Families of Objects, Umberto Eco, 1970

Jiří Skála (born 1976 in Klatovy), is known for his playful and witty conceptualist approach to various social contexts and situations. He often employs participants in the process as if in a game, instituting subtle interventions and creating objects that have only been minimally altered but which are no less effective in altering our own perspectives of the given situation. He studied from 1998-2003 at the Prague Academy of Fine Arts in the studio of visual communication under J. David and in the graphics studio of V. Stratil, and at the post-graduate program at Palais de Tokyo, Paris from 2003-4. He was a Jindřich Chalupecký Award Finalist in 2004 and his work has been presented at such international exhibitions as the Tirana Biennale I (2001), Palais de Tokyo (2003) and the Prague Biennale I and II (2005 and 2007), Frankfurter Kunstverein (2006), Art in General in New York (2006 and 2007). He is also the co-founder of the Etc. Gallery in Prague which was established in 2004 and a member of the PAS group, together with the artist Tomáš Vaněk and curator Vít Havranek.