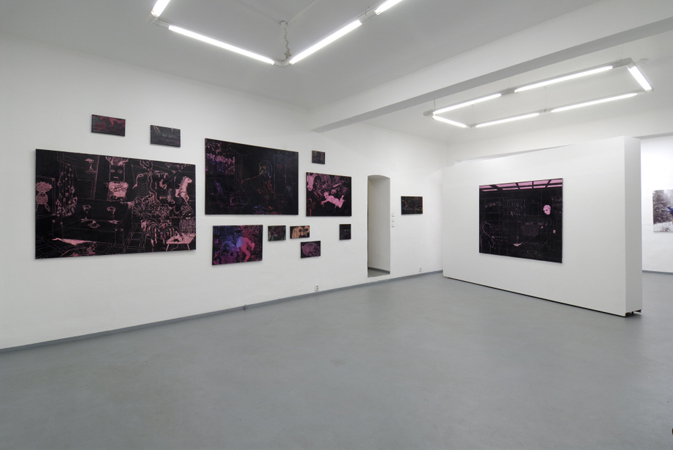 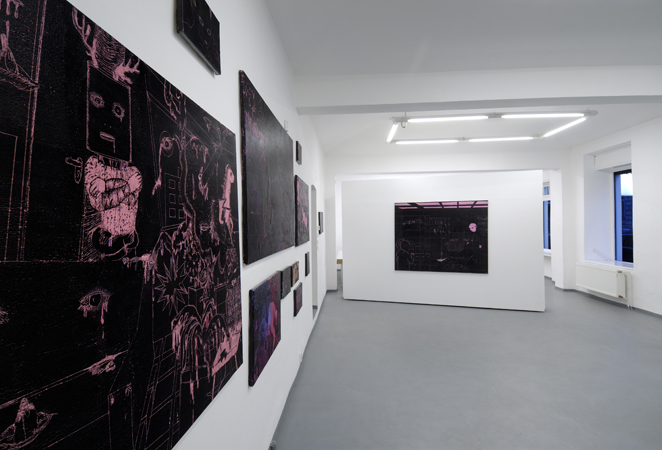 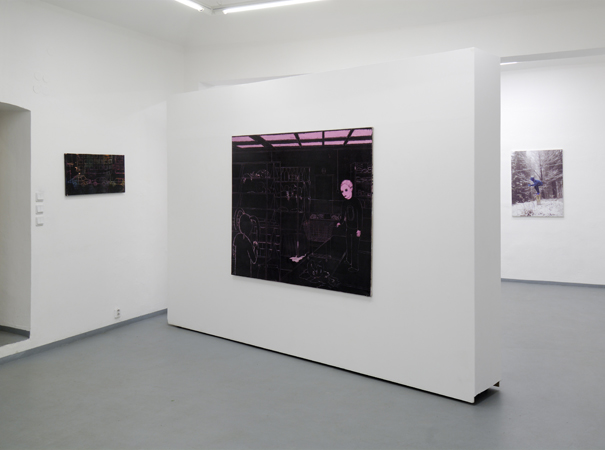 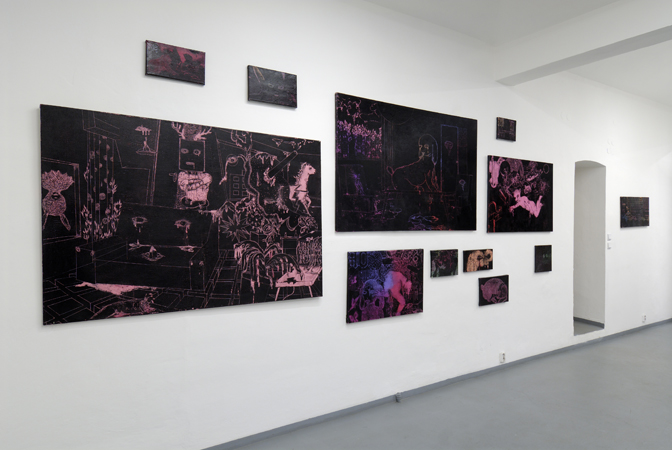 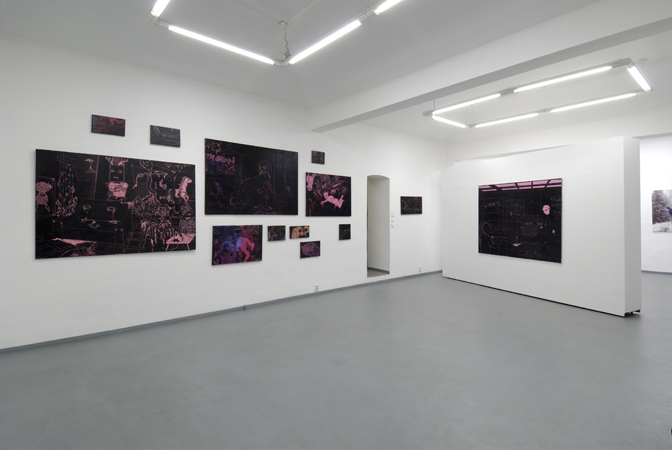 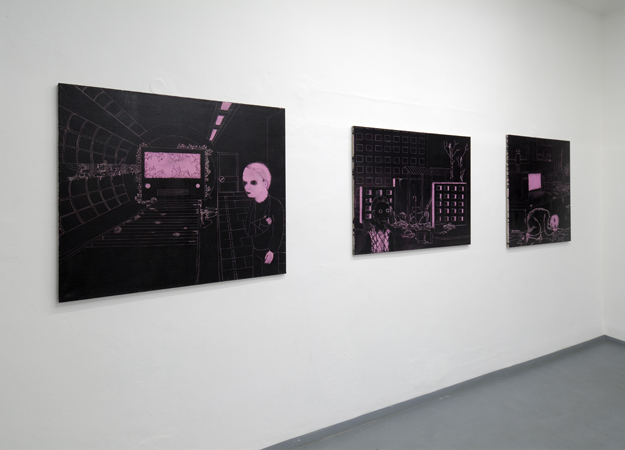 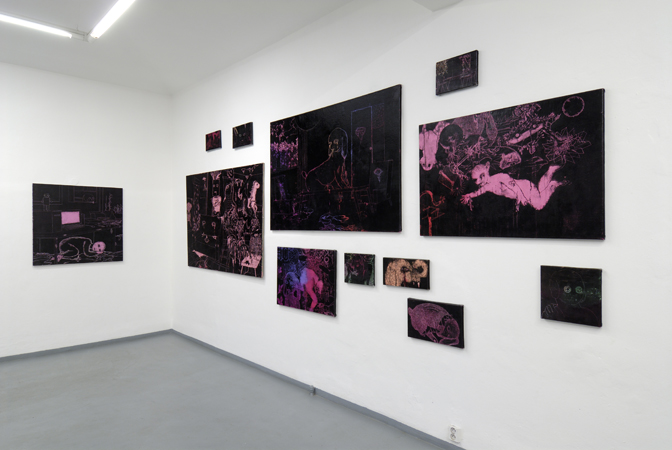 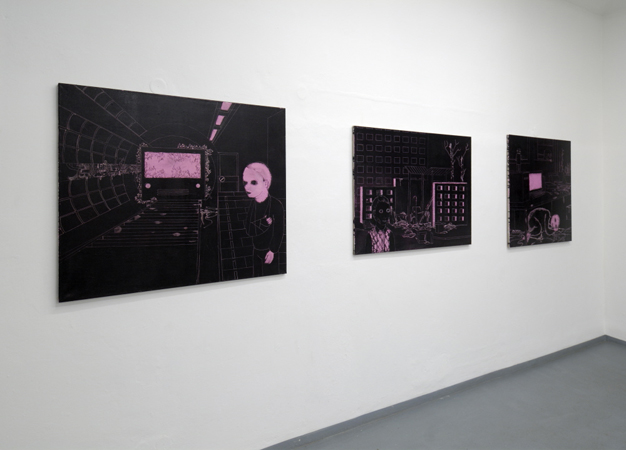 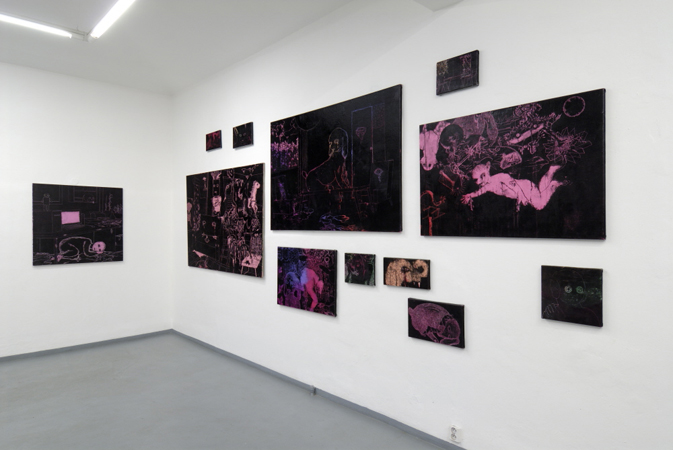 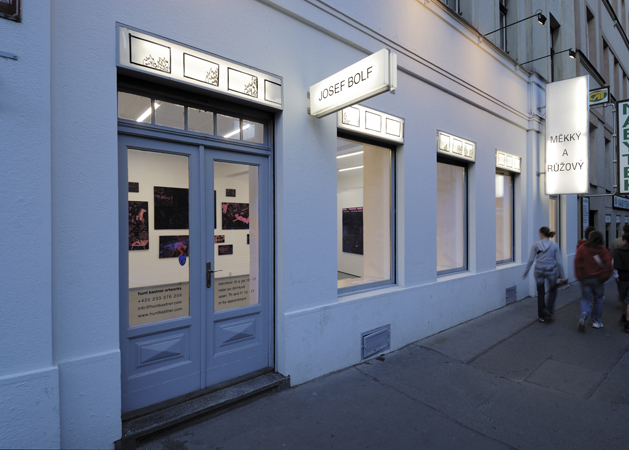 hunt kastner presents new work by the Prague based artist Josef Bolf in a solo exhibition of his “scratch paintings” entitled SOFT AND PINK, which opens on May 15 th and runs through July 15 th.

Using a new medium and technique, Bolf has expanded upon some of his characteristic themes of helplessness and vulnerability, destruction and self-destruction, love and death. His work is inspired by a wild mix of comics, cartoons, animated films, graffiti, street art, automatic writing, gothic horror films, sci-fi, computer games and, most importantly, the workings of the mind – both conscious and subconscious. In his new work, Bolf examines the different ways we perceive everyday existence and as is his custom, he does this from the inside looking out.

In a method inspired by a school room art class technique, Bolf used wax crayons and pigment to lay down the background color on varying sizes of canvas and paper, which he then painted over with ink, and on this black background scratched in images using a nail or razor, resulting in a negative image. Bolf has used this technique before in smaller sized studies, but never on such a large scale or on canvas. Following an intense bout of painting over the past 6 months, where the artist’s works have been featured at two major exhibitions (The Jindřich Chalupecký Award Finalists at the Prague City Gallery in the Municipal Library at the end of last year, and his solo exhibit Death is not the End? currently on at the Moravian Gallery in Brno until May 21sth ), he found it a pleasure to be able to work with a new medium and technique, exploring and experimenting with the possibilities as well as the limitations.

In this new series of work, Bolf’s sad, often wounded and crying, cartoon-like creatures seem withdrawn and lost in their own secret worlds, unwilling or unable to change what is happening around them.. Sterile and mundane environments breed chaos and destruction – panelak apartment buildings burn unheeded, empty cars stand still and waiting on eerily empty streets, electrical wires proliferate organically from the back of computers or stereos, rigid tables and chairs remain clean and uninhabited while everything around explodes in turmoil. The soft rosy pastel colors shimmer through the black ink, drawn in intricate delicate strokes similar to etchings, while infusing the images with an almost alien or radioactive glow. Bolf’s work is brutally honest, even primordial, packed full of strong and often painfully too real emotions and fears that we all know only too well, but manage to control and hide under a thin veneer that we call civilized behavior. Josef Bolf is not interested in doing what everyone else is doing, he also is not afraid of loosing control, he doesn’t hide from his demons but confronts them head on, and by doing so, makes the most out of every sensation and every experience.

Josef Bolf (born 1971 in Prague) studied drawing and painting at the Prague Academy of Fine Arts in the studios of J. Načeradský, V. Kokolia and V. Skrepl from 1990-1998, as well as at the Kongsthögskolan in Stockholm (1995) and Akademie der bildende Künst in Stuttgart (1996). He is one of a group of talented and promising young artists that came out of the academy in the late 1990s, a member of the artist group Bezhlavý jezdec (Headless Horseman), which included fellow students Jan Mančuška, Jan Šerých and Tomáš Vaněk. He has exhibited extensively and his work is included in several public collections in the Czech Republic (Foundation for Contemporary Arts, National Gallery in Prague and Wannieck Gallery in Brno) as well as private collections both in the Czech Republic and abroad.