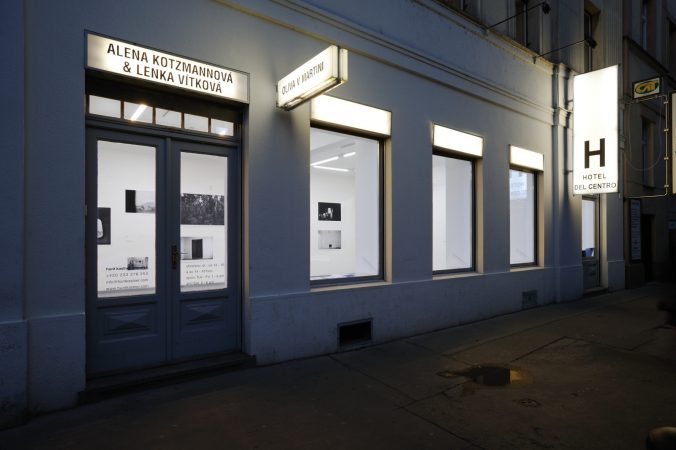 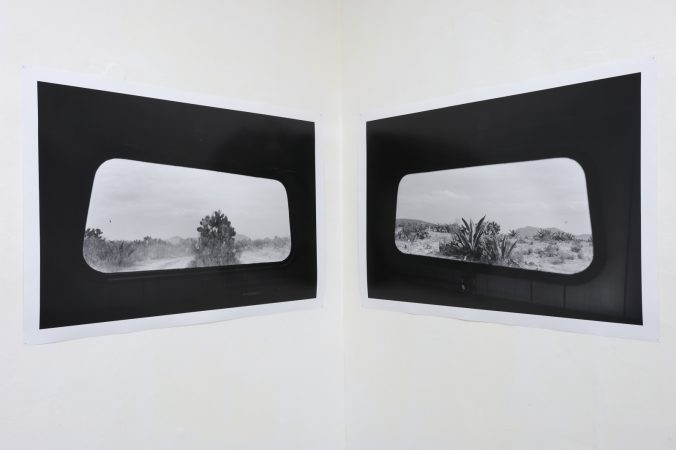 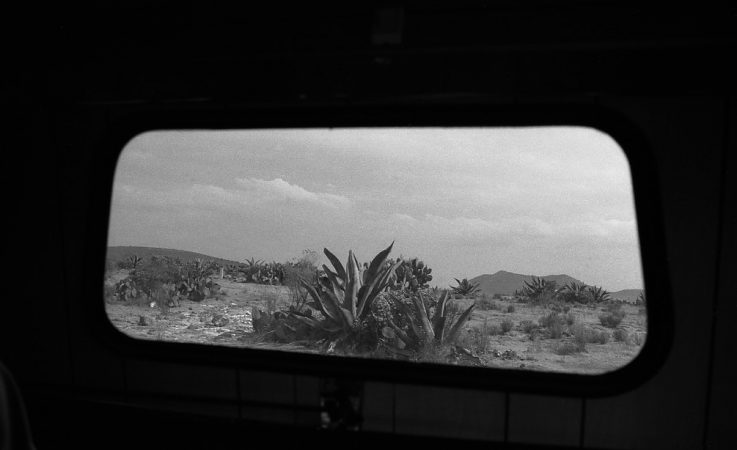 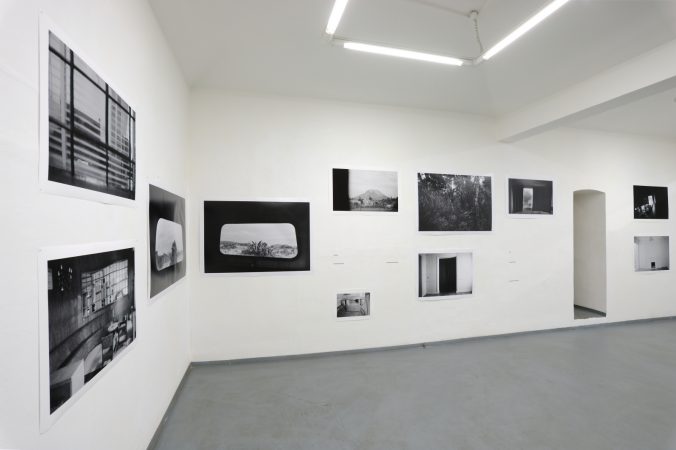 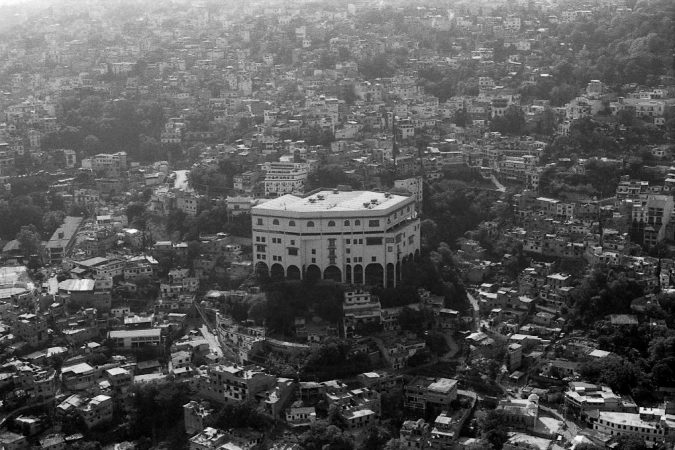 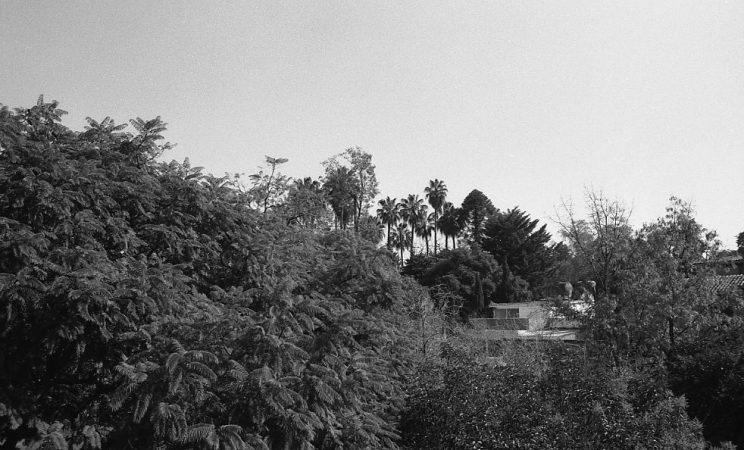 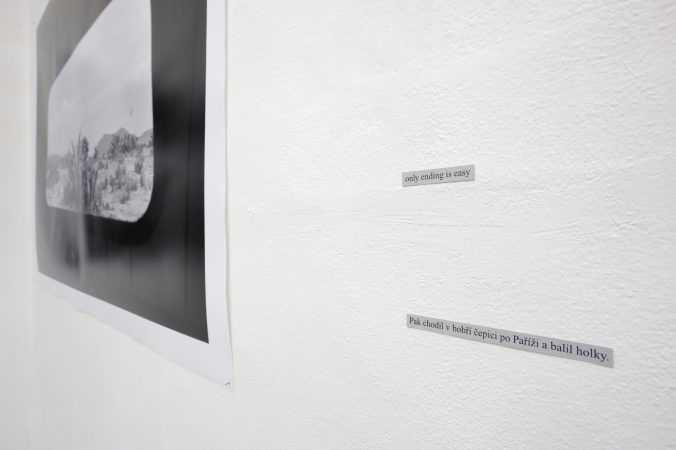 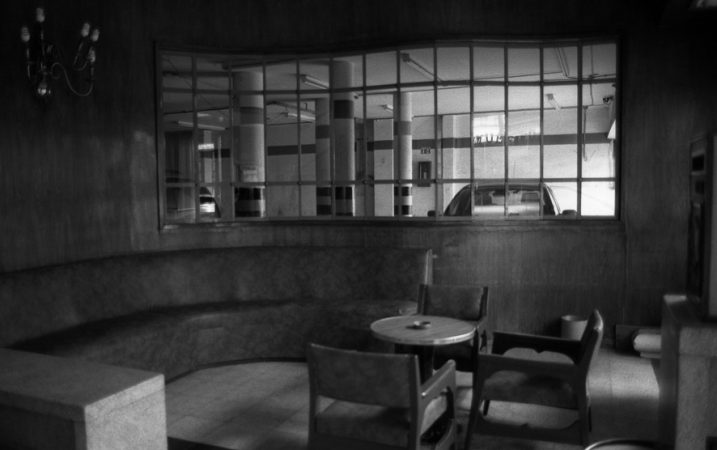 hunt kastner is pleased to present new work by Alena Kotzmannová in the exhibition Olive in a Martini  For her exhibition at hunt kastner, Kotzmannová invited the Prague-based artist Lenka Vítková to collaborate in an installation made up of a series of Kotzmannová’s photographs combined with text-based work by Vitková.

The black and white photographs of varying sizes by Kotzmannová and the small, intimate wall texts by Vítková, can be read independently of each other, as well as mutually. While the link between them may not at first glance be obvious, after viewing the photographs and reading the texts a story begins to emerge. Vitková’s texts (some in Czech, a few in English) of fragments of events that took place in another time and place. Together, the two artists chose a selection of texts based their relationship to, and in combination with, the photographs to create a kind of temporary map – a map that plots recorded meetings, whose nature and meaning are not obvious and can only be imagined. You can take one layer away, but traces of the images, messages and personal testimony remain. The story created between the individual photographs and in conjunction with the texts is important, but it is a temporary one: transience is a familiar theme in Kotzmannová’s work. Some details are immediately registered and others, more subtle, come with further contemplation: these two artists are offering us an olive in a martini, which is not quite the same thing as a martini with an olive.

This is not the first time that Kotzmannová has worked in close collaboration with fellow artists, in the past for instance she shown with other Prague based artists such as Jíři David (the exhibition Kyjev/Kiev at MXM in 2001) and Michal Pěhouček (the exhibition Die Station Sehnsucht at Galerie Unsichtbar in Suttgart in 2002). Her work is characterized by technically pure black and white photography combined with special techniques or adjustments, such as printing on canvas and special paper, enveloping large-scale photographs in a plastic covers or combining her photographs with video or slide projections. Her unique combination of the traditional and unconventional plays with the very nature of the medium, pushing boundaries, and offers us an unusual and highly contemplative perspective that embraces both the classical and contemporary.

Alena Kotzmannová (1974, Prague, CZ) studied at the Academy of Applied Arts in Prague in the studios of Conceptual and Intermedia Art and Photography, graduating in 1998. She has been the recipient of several scholarships and stipends for creative work abroad – Mexico, New York, Finland, Greece and England – and was nominated for the Jindřich Chalupecký Award in 2005. Most recently, her work was exhibited at the Prague Biennale, and the A.I.R. Gallery in New York. Last year, Kotzmannová traveled quite extensively, spending time in Portugal, England, New York and Mexico, which has provided material and inspiration for her most recent work. Some of her new work can also be currently seen in two group exhibitions in the Czech Republic: Contemporary Czech Cubism, curated by Václav Magid, at the Prague City Gallery at the Old Town Hall (until April 13th) and as a guest in Jiří Kovanda: I Played With Girls When I Was Young, curated by Jiří Kovanda and Edith Jeřábková in Klatovy (until June 1st).

Lenka Vítková (1975, České Krumlov, CZ) studied Arts Education and Linguistics from 1993-1998 at the Palacký University in Olomouc. Her art work (a series of large scale painted panels) can currently also be seen in Prague until March 16th at Karlin Studios in the group exhibition I Couldn’t Care Less About French Taste (with Sláva Sobotovičová and Patricia Fexová). Vítková is also known for her curatorial projects and critical work. Since 2006, she has been the curator of Galerie 36 in Olomouc, from 2004 and editor with the art magazine Umělec, and in 2006 was the recipient of a development grant by Tranzit.