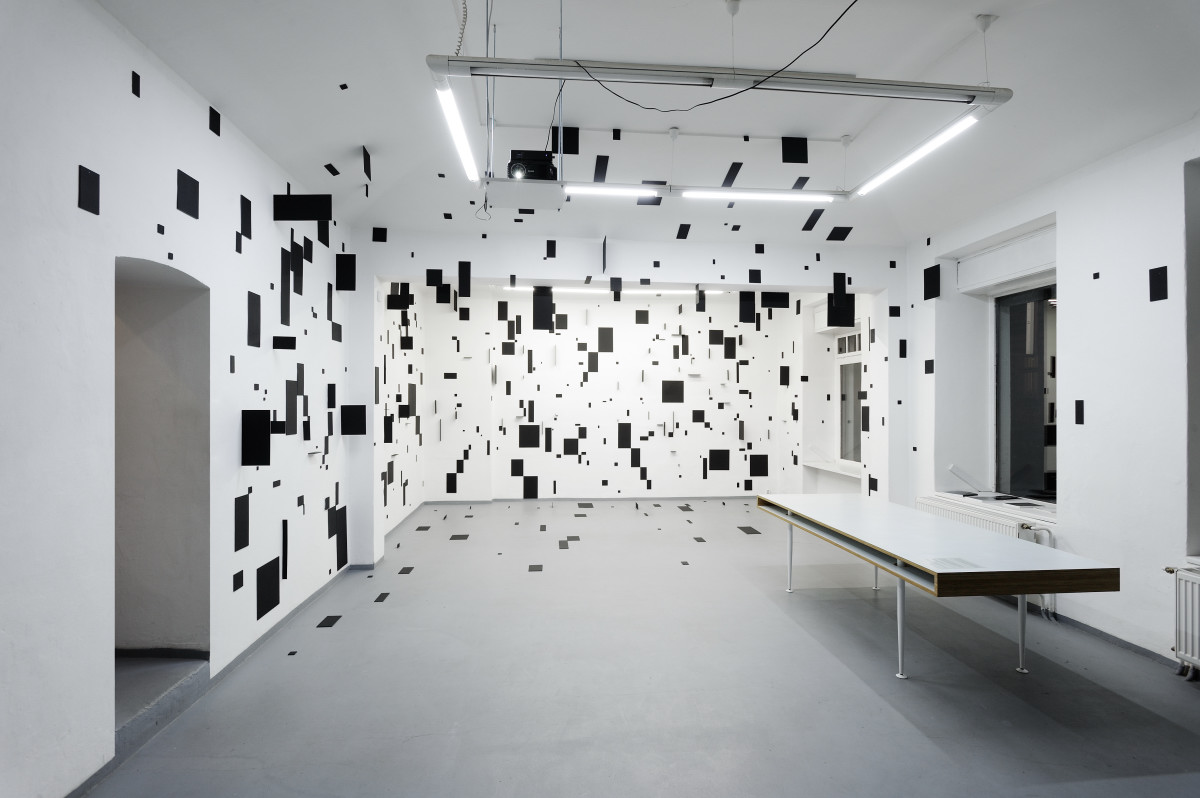 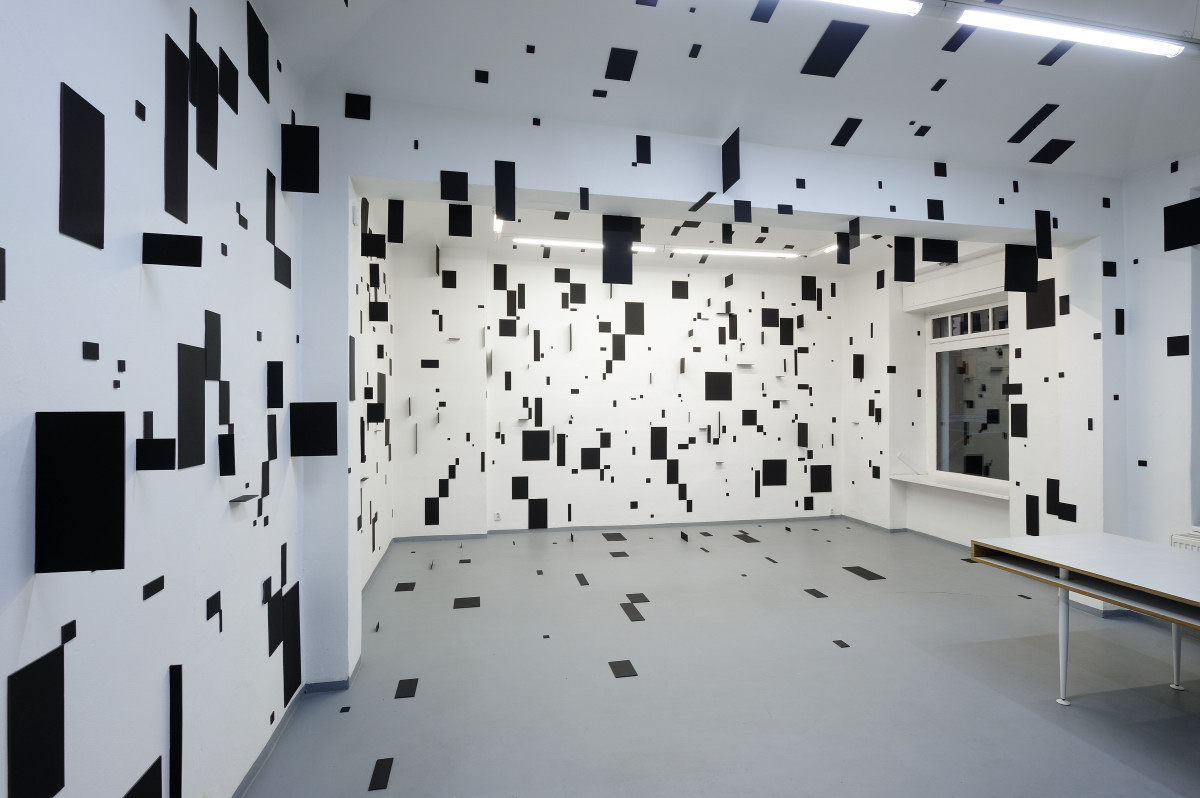 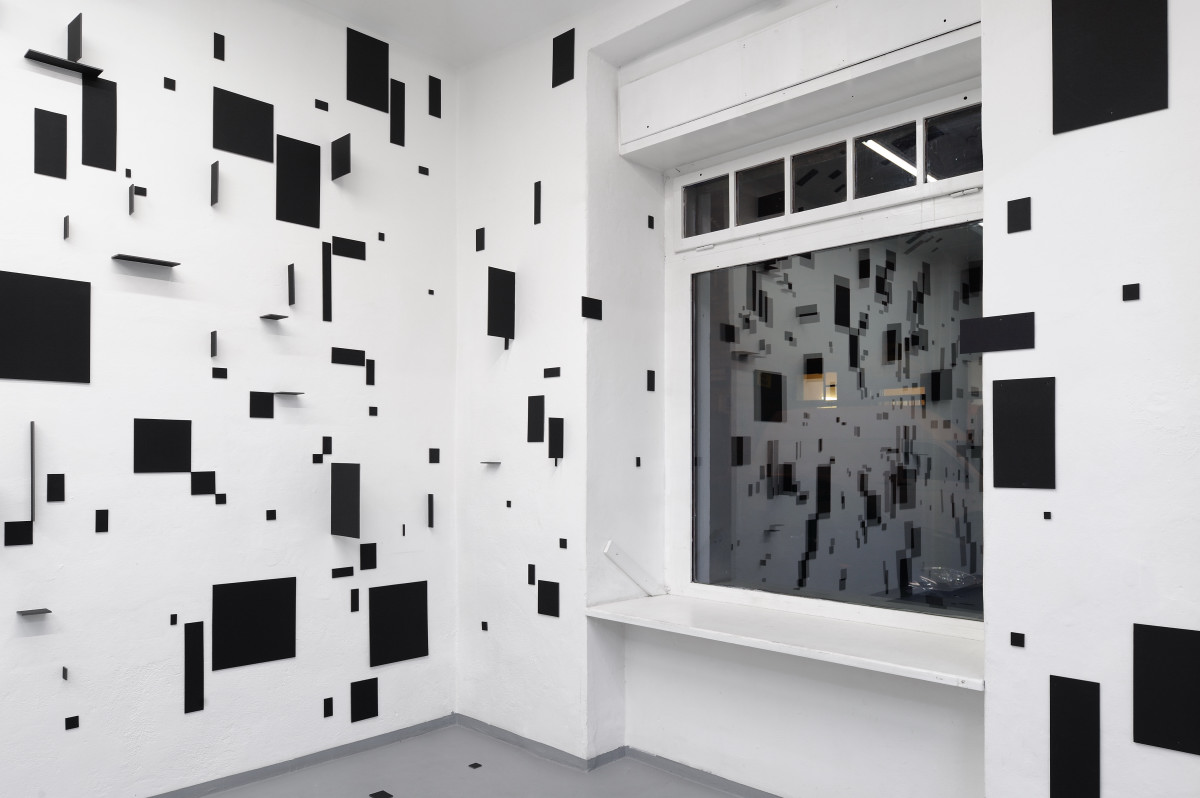 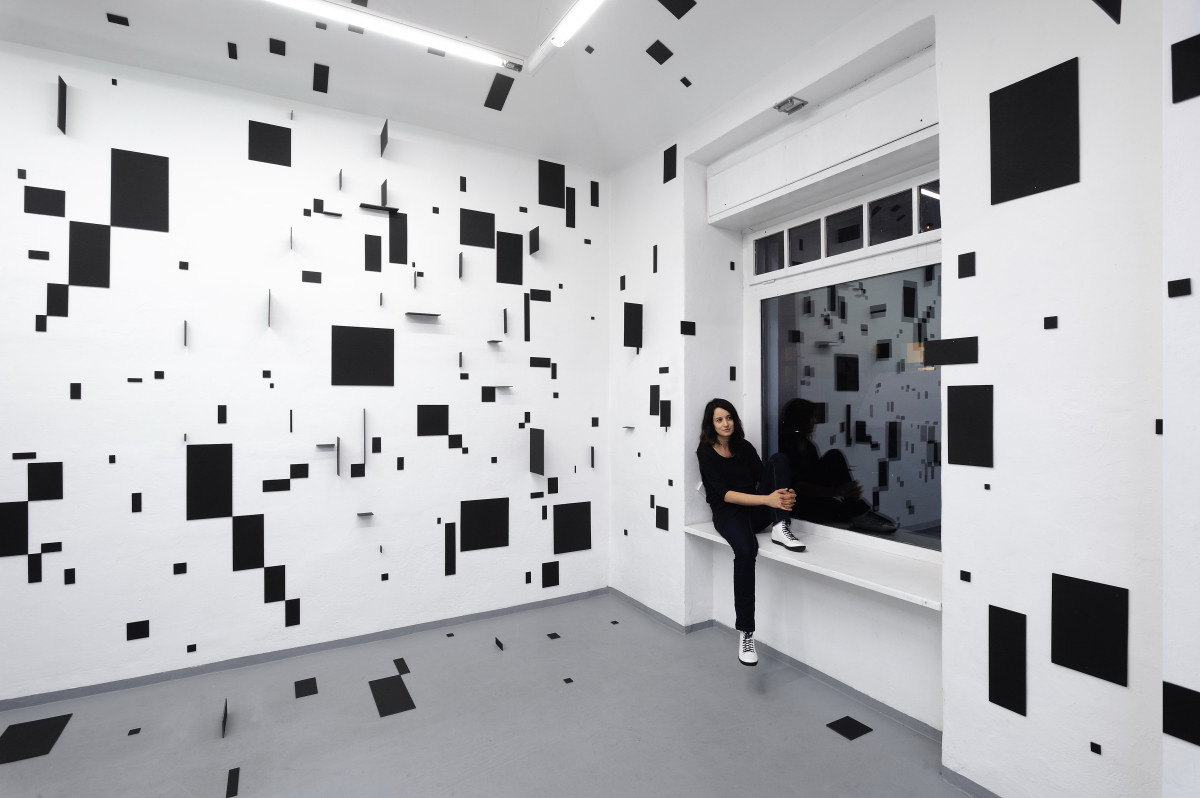 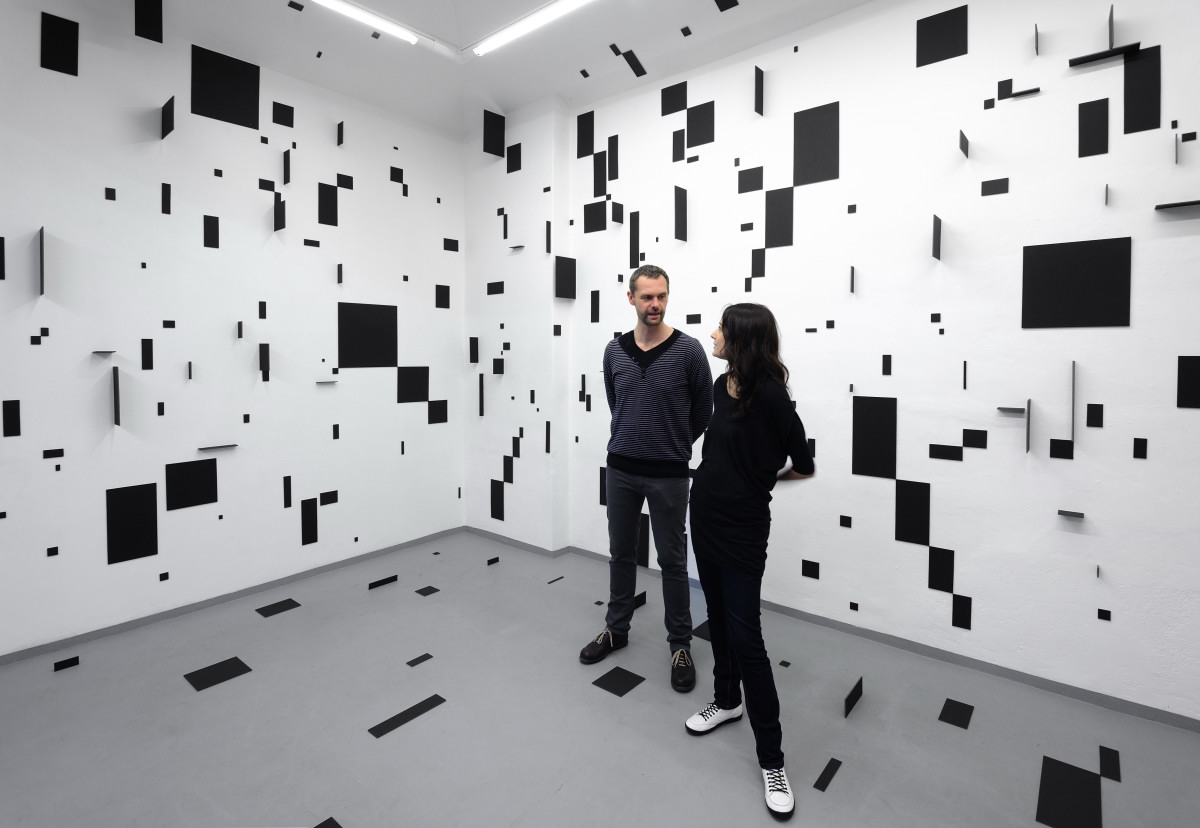 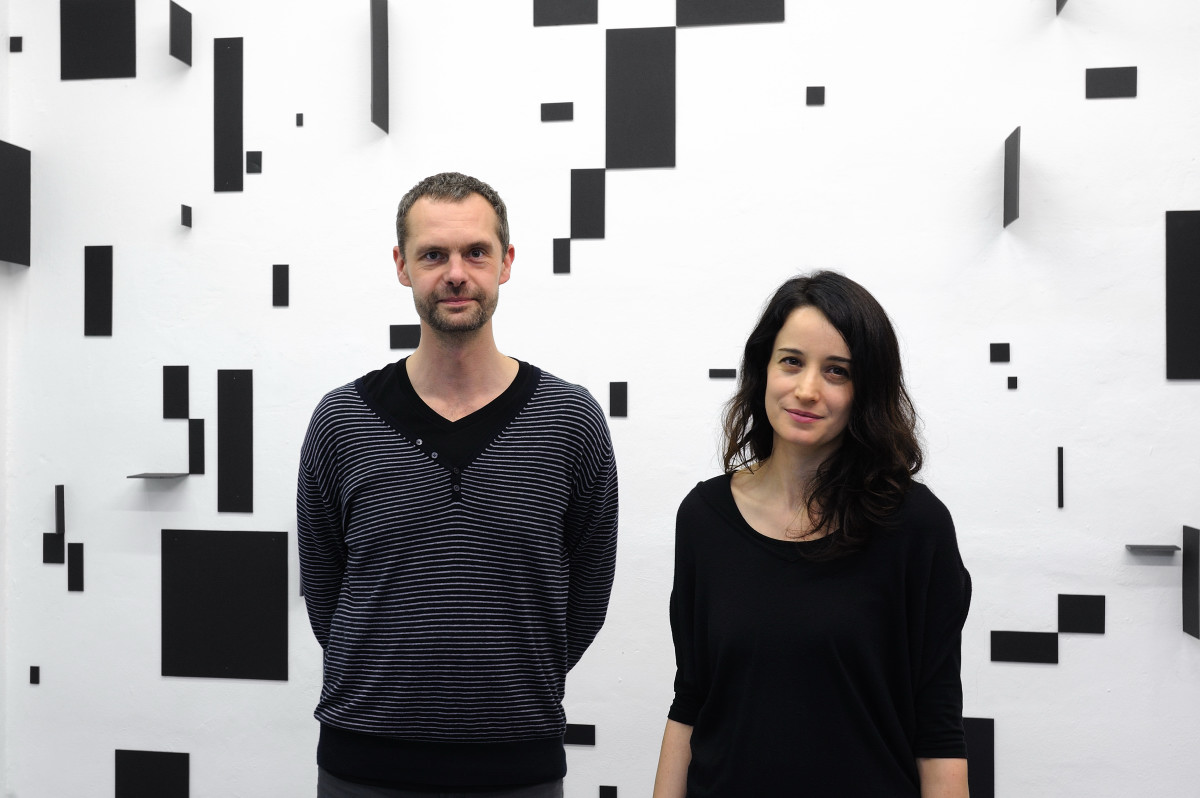 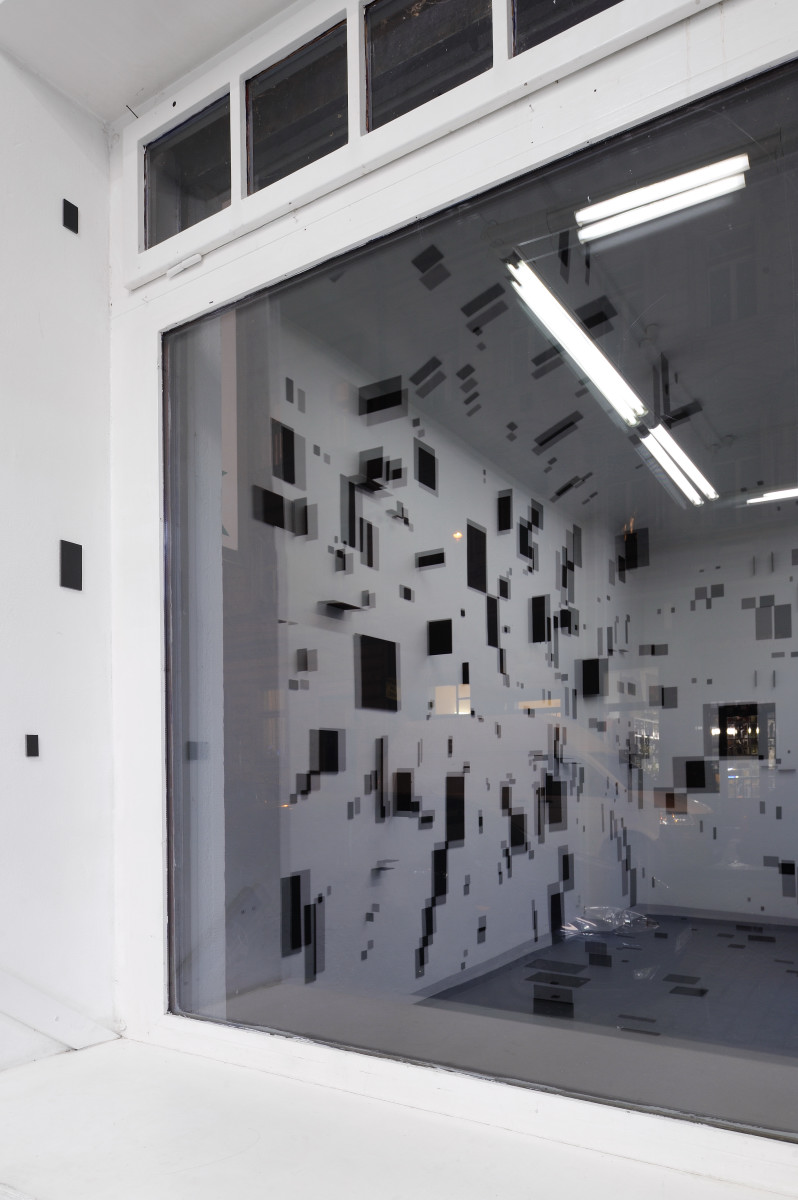 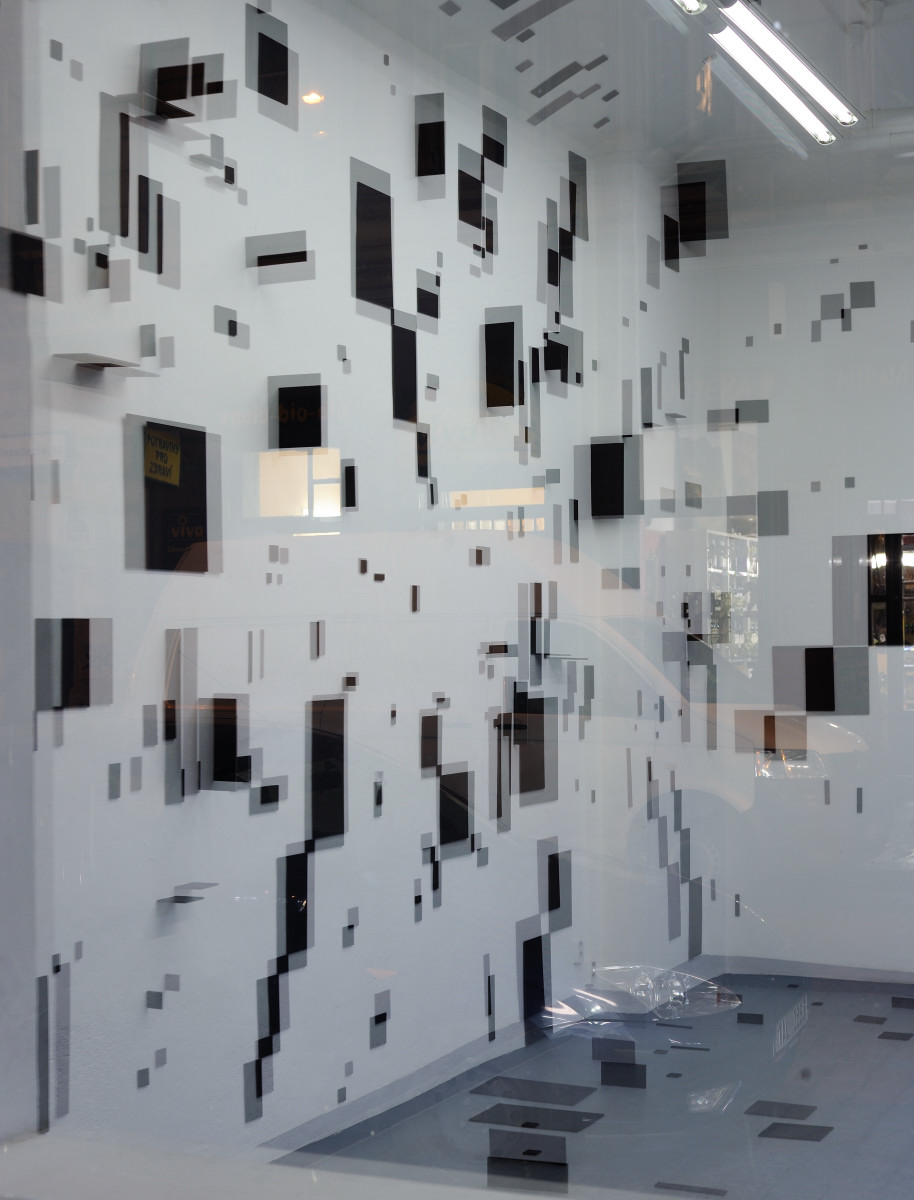 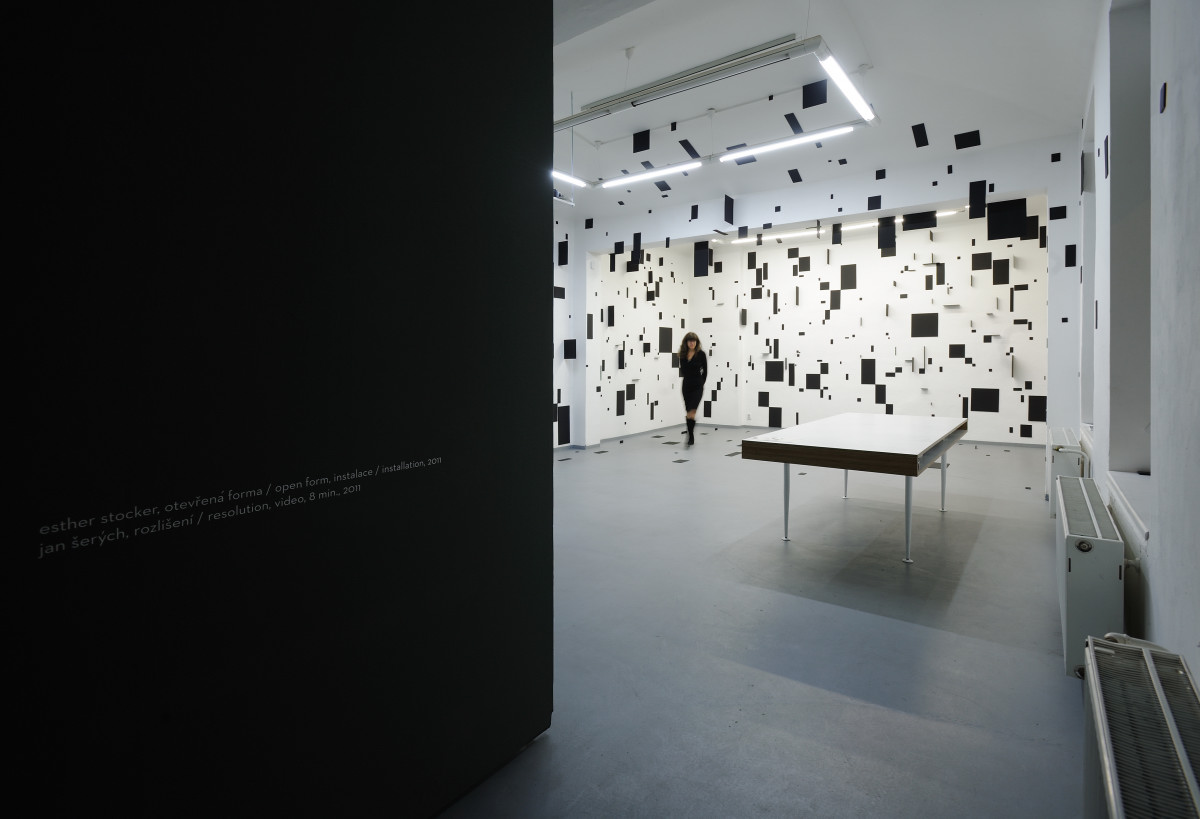 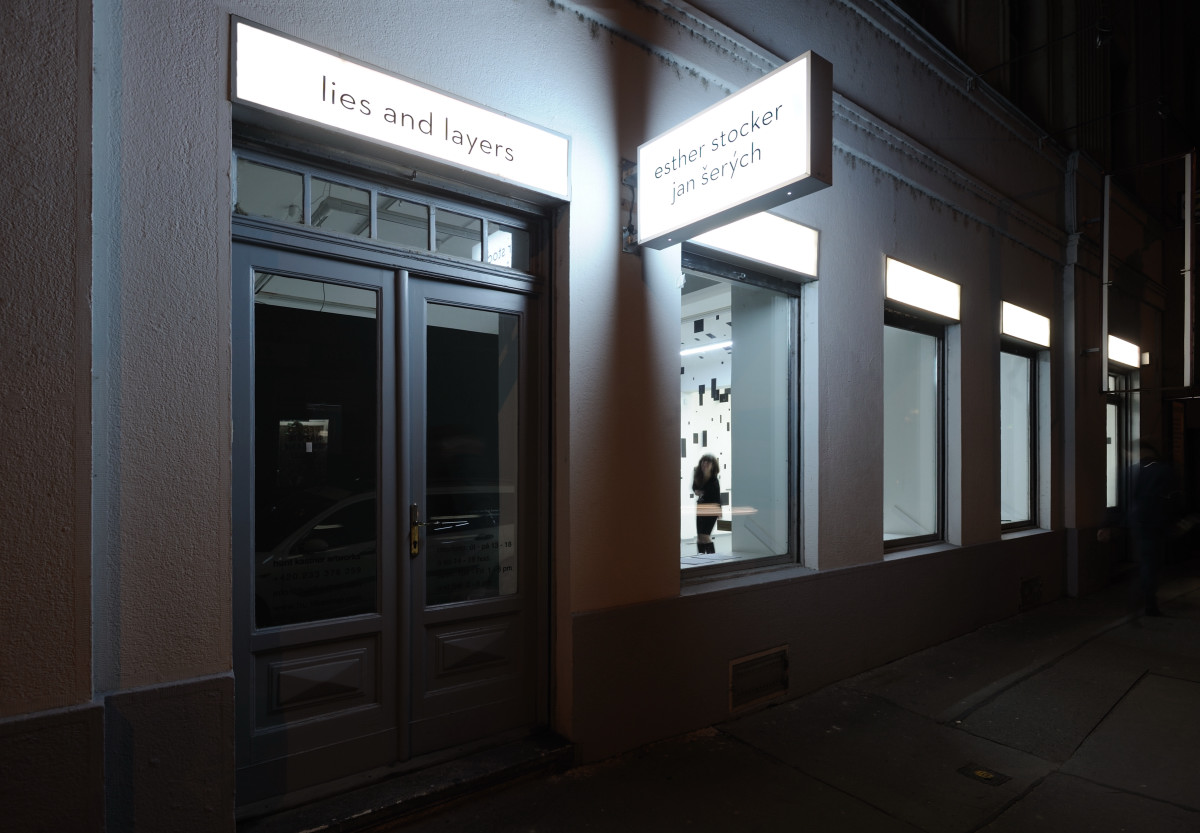 hunt kastner is pleased to present a collaborative exhibition project by the Prague-based artist Jan Šerých and the Vienna-based artist Esther Stocker that was created specifically for the gallery space. In the exhibition Lies and Layers, Šerých presents a new video work, Resolution / Rozlišení (8 min. loop with sound), in conjunction with the black and white space installation Otevřena Forma (Open Form) by Esther Stocker.

Stocker and Šerých both use geometric abstract forms and monochrome colors in their work, while coding or camouflaging messages that test the perceptual faculties of the viewers. Stocker is perhaps best known for her space installations which expand from the canvas and invade into the exhibition space becoming full sensory installations. Šerych works in the mediums of painting, video and most recently photography creating conceptual trompe-l’oeils, as he struggles to rationalize the irrational in both art and life. Both artists’ work reacts to the perpetual uncertainty of the human condition, which yearns for the impossible – total control.

It is a fundamental human desire to want to conceptually understand the world in which we exist. By attempting to uncover (or to even project) a specific order of things in our world, we gain a comforting sense of dominance and control. Even though our senses strongly affect our perception, it is knowledge and experience that ultimately shape it. Sensory perception merely lends it direction and, as such, it is inferior to our cognitive power which “automatically” subjects everything we encounter to categories predetermined by our individual vision of reality. It is a question whether these preset knowledge frameworks suffice for the classification of our impressions and experiences, or whether they “mold” our impressions to fit them into existing categories and thus become familiar and comprehensible notions we can define and convey.

In the exhibition Lies and Layers, Stocker and Šerých both highlight and explore the human need to identify, categorize and “read” reality. Both artists distance themselves from the idea of universal knowledge, while striving to demonstrate its limitations. In their opinion, our innate desire to rationalize prevents rather than helps us in our understanding and intuitive grasp of the world around us. In the exhibition, the viewers participate in a game where it is difficult to distinguish illusion from reality. Time and space, the essential dimensions of reality are obscured: distinct events blend into each other, then they suddenly stop and without any apparent connection they occur again and continue, disjointed and out of context. Abstract geometric forms reinforced by the stark black and white colors further disorient the viewer and evoke feelings of alienation, confusion, insecurity and even a prevalent sense of inadequacy – there is no hierarchy. Interpretation is no longer the goal. The artists offer no extraneous information. They intentionally want to confuse us in order to appeal to our alternative sense of perception and our alternative reality (-ies).

The aim of the exhibition is to question our existing cognitive process by emphasizing on the process of perception rather than the actual experience. New, strictly subjective points of departure originating in the viewer’s psychology help create new, emotional forms of knowledge which are based on intuition rather than language. Although this new type of knowledge might not respond to our pre-defined categories, it reveals new ways of comprehending reality.

Esther Stocker (*1974, Silandro, Itálie) studied at the Akademie der Bildenden Künste in Vienna, Accademia di Belle Arti di Brera in Milano and the Art Center College of Design, in Pasadena California. She is the recipient of many awards, such as Preis der Stadt Wien (2009), Südtiroler Preis für Kunst am Bau (2007), Otto-Mauer-Preis (2004), Förderpreis für Bildende Kunst des BKA (2004), Anton-Faistauer-Preis (2002), Paul Flora Preis (2002,) and her work is included in many prominent public collections. In addition to recent solo exhibitions in Paris, Rome, Hannover, Genoa, Berlin and Vienna, Stocker also has had solo exhibitions at the Dům umění v České Budějovice in 2009, at the Wannieck Gallery in 2010, and participated this year in the exhibition Plane, depth, space – Motifs and Principles of Perspective in Art, at the Moravian Gallery in Brno.

Jan Šerých (*1972, Praha) studied at the Prague Academy of Fine Arts from 1992-99 in the studios of printmaking, new media and painting. He has also participated in several international study and residency programs, such as the Sommerakademie in Salzburg, PROGR artist residency program in Bern, and the ISCP residency program in New York City. His work in included the collections of the Prague City Gallery, the National Gallery in Prague and the European Parliment. Some of his most recent solo exhibitions include The Best of Bad Solution, Galerie Blansko (2010), Bip Bip / Beep Beep, Labor, Budapest (2010); Paramnesia, Strabag Kunstforum, Vienna; and Ano / Yes, Old Town Hall, Prague City Gallery.

Special thanks for help in helping us to organize this exhibition goes to the Ministry of Culture of the Czech Republic for their support of our exhibition program, the Austrian Forum in Prague for helping to host Esther Stocker in Prague, and Stanislav Majer and Roman Štětina for their help with the video.