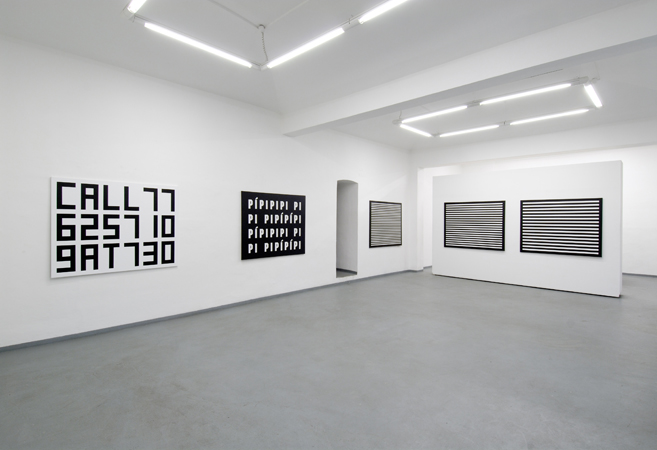 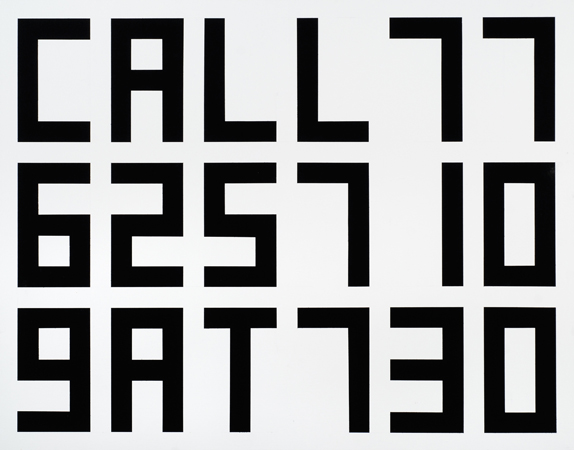 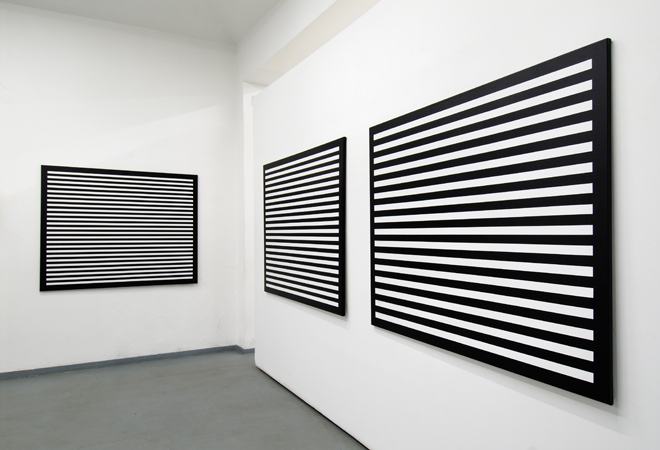 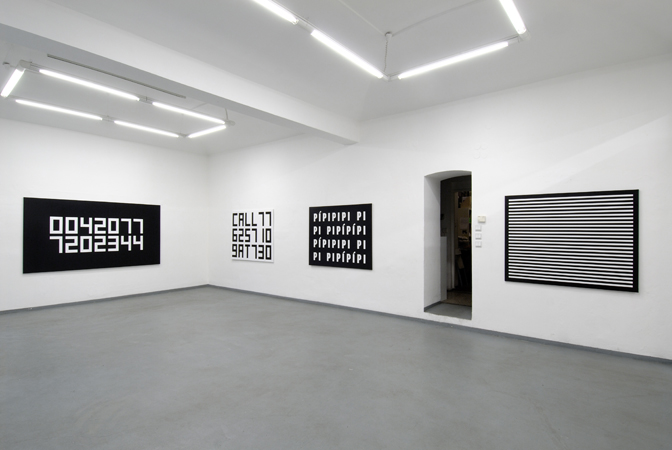 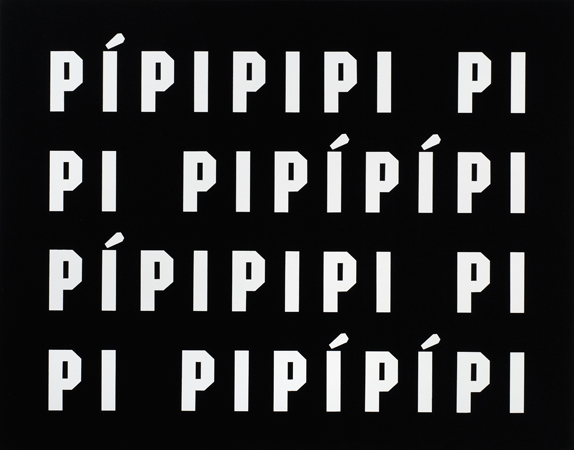 hunt kastner  is pleased to present a solo exhibition of new work by the
Prague based artist Jan Šerých. The exhibition, which includes several large scale
paintings (Zoom, The Telephone Number of a Celebrity, But I Don’t Know Which, Call
777625710 at 7:30, Beepbeep) and one video (Takemehome), further explores the
artist’s self-acknowledged favorite theme of “cultural cryptography” in his signature
contextual minimalistic style.

Jan Šerých’s paintings, objects and videos function as conceptual trompe-l’oeil. He
has created a formal abstract language derived from geometric tendencies in painting
and typography presenting characters depleted of their original significance. In
Serych’s work, nothing is assumed and everything is open to question – symmetrical
geometric or typographic shapes are exposed as multi-purpose covers meant for
recycling and obsessional observations. Šerých both simulates and mocks accepted
rules and aesthetics, creating his own system – one where multiple meanings are
possible and, where at the same time, sometimes nothing much at all is conveyed.

“Although the exhibition Takemehome consists almost entirely of paintings, it can seem
in its visual conciseness to be a manifestation of a new iconoclasm. However, it is
primarily a reflection of my current obsession with codes and secret messages, their
inherent value and conditionality. What is hidden behind the wall of these codes is in
fact very simple and accessible information. However, ease of acquisition is not, of
course, directly proportional to a thing’s value in our eyes and obstacles often act
paradoxically as aphrodisiacs – be they the awkwardness of dialing an unfamiliar
number at 7:30 in the morning as prompted by one of the “painted” instructions, a
young camper’s Czech-English translation using morse code, the hidden identity of a
celebrity… In the same way, with a small dose of patience and resolve, one can come
to know my birthdate via the information on the gallery’s exterior display, camouflaged,
for example, as one of the possible dates of my re-birth, or — in a better scenario —
that of my definitive death. And so it is also the case with the fate of an alien (or an
outsider of some kind), which, on one videoprojection at the exhibition, coughs up his
message, waiting until it reaches someone – each pause representing an actual letter
thereby forming an uncomplicated yet extrememly sad phrase…. „

Jan Šerých was born in 1972 in Prague. He studied at the Prague Academy of Fine
Arts from 1992 – 1999 in the studios of print-making (J. Lindovský), new media (M.
Bielický) and painting (V. Skrepl). He was a member of the artist group BJ (Bezhlavý
jezdec/Headless Horseman), which was active from 1997-2002, together with fellow
Academy students Josef Bolf, Ján Mančuška and Tomáš Vaněk. He was short listed as
a finalist for the prestigious Jindřich Chalupecký Award both in 2003 and 2005 and has
participated in many significant exhibitions of contemporary art including solo
exhibitions at the Prague National Gallery (Dial, 1999), Dům umění České Budějovice
(Kdopak to mluví, 2003), Moravian Gallery in Brno (Abbey Road 2:45, 2005) and group
exhibitions such as the Biennale of the Young (2002, 2005) and Praguebiennale2,
(2005). His work is included in public collections at the National Gallery in Prague, and
Wannieck Gallery in Brno.