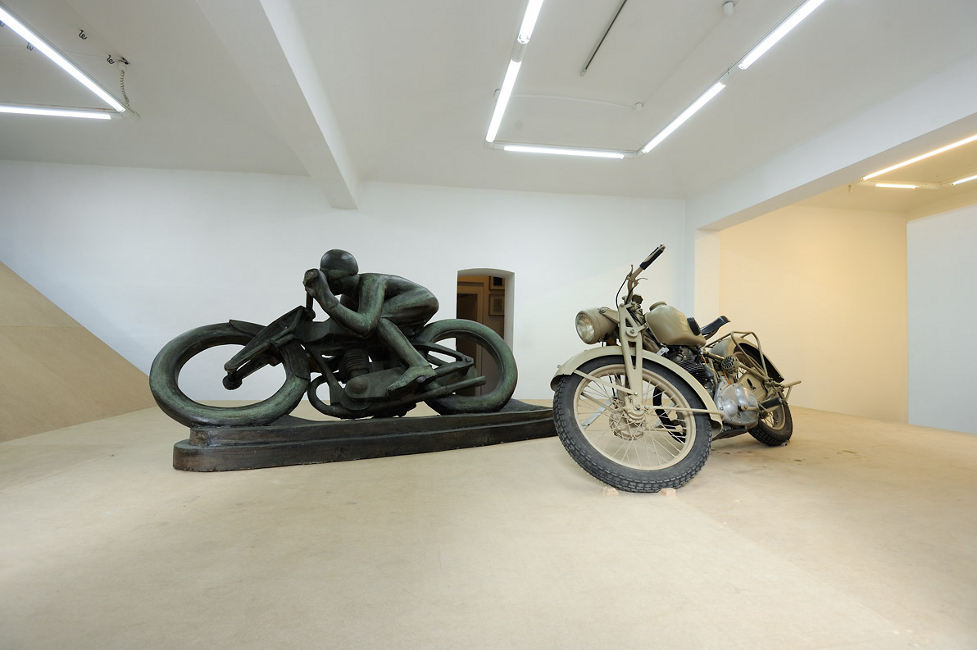 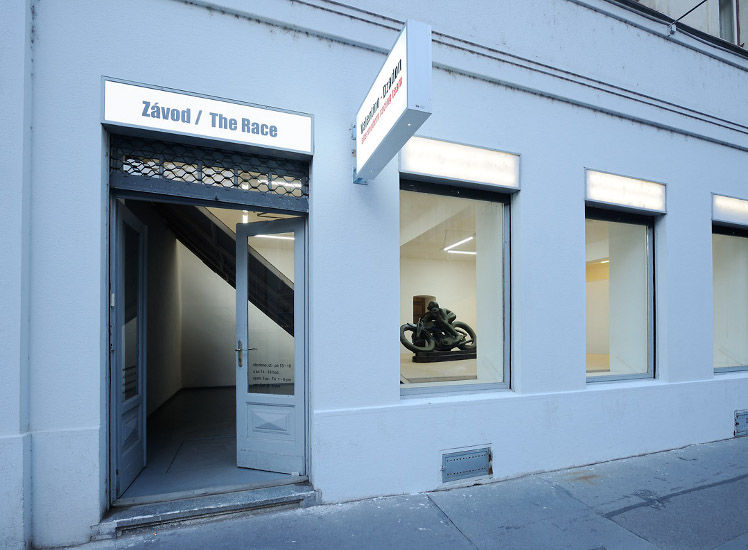 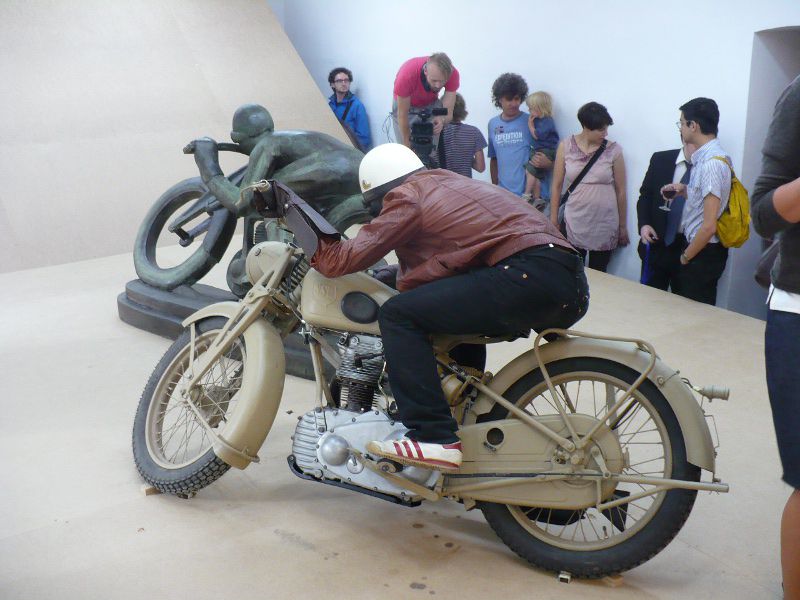 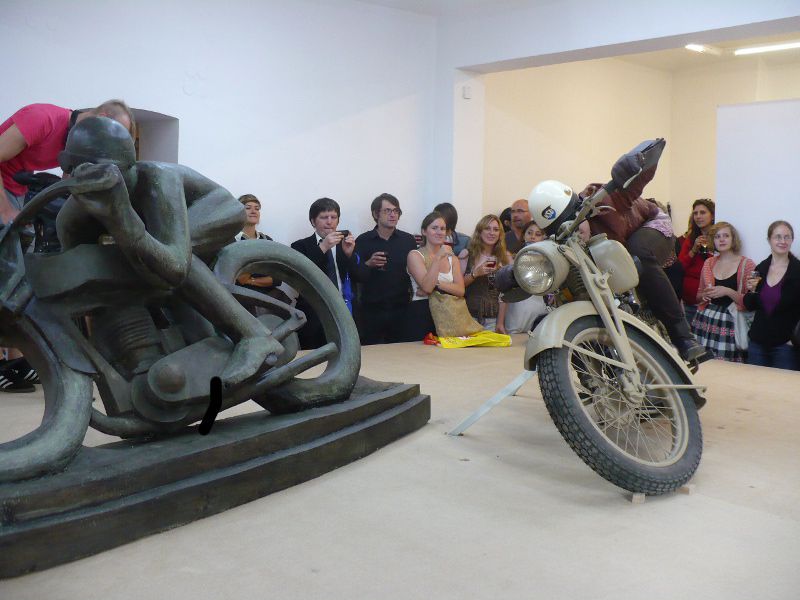 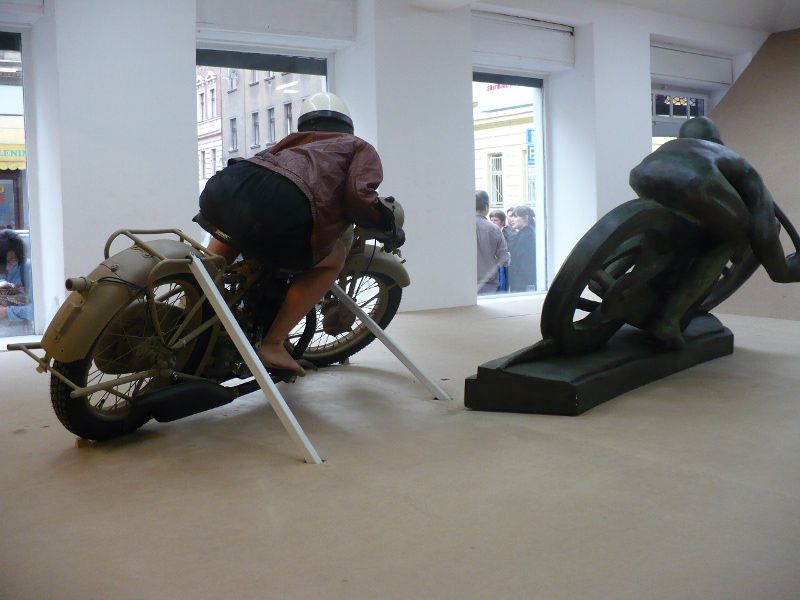 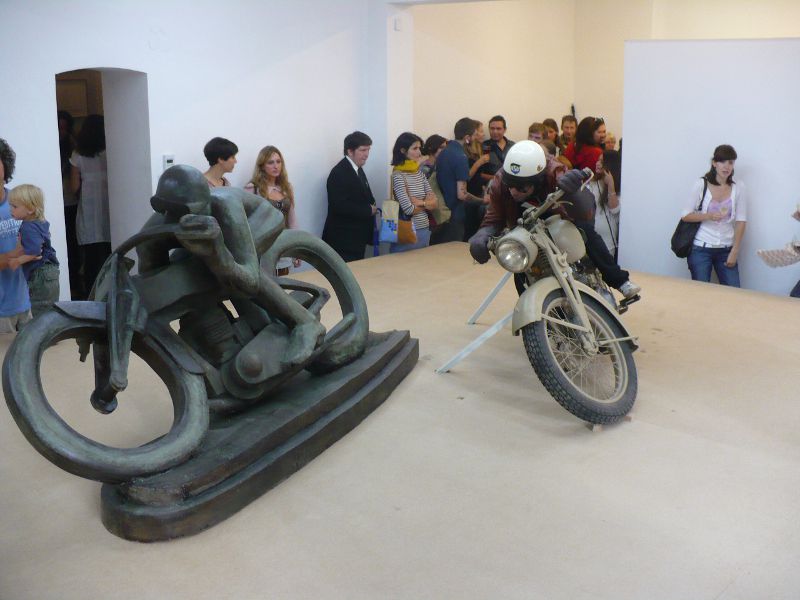 A motorcycle race suspended in time and space, where contemporary sculpture aspires to catch up with a masterpiece of modern art. As they head into the last turn just before the finish line, the contemporary artist Tomáš Džadoň and his machine (of the team Valentino & Džadoň) are hot on the trail of Otakar Švec’s Sunbeam motorcycle (1925). h u n t k a s t n e r is pleased to present a new collective project in the exhibition The Race by Tomáš Džadon and Valentino Diego. Džadon invited Valentino to participate in his exhibition at hunt kastner, with the idea that something interesting could come out of a joint project that involved his vintage NSU German motorcycle from the 1940’s. Over the past five years, while the artist worked on renovating the machine as a way to relax, he was intrigued by the similarity between his machine and the iconic Modernist sculpture Sunbeam from 1924 by Otakar Švec that can be seen in the National Gallery In Prague. This led the artist to further contemplate about the commonalities, as well as differences, in approaches between the modernist era, which places the emphasis on form and material, and contemporary art, which places content above all. For the exhibition The Race, Džadon and Valentino have each created their own individual sculpture in concert with each other and a replica of the bronze sculpture Sunbeam by Otakar Švec. In very simple terms, the exhibition presents a formal sculpture next to an object sculpture on top of a site-specific sculpture, creating an overall installation that addresses the gallery space and the audience in a playful and yet sophisticated manner and on many different levels. The result is a full installation work that immerses the viewer in an intricate sensory/narrative experience that is both a tribute to, and a departure from, traditional sculpture. The work demands to be regarded, and interacted with, in very different ways depending on the angle of approach: the view from the street through the three large windows; as you enter the gallery under a low sloping ceiling construction; as you circle the exhibition platform; and finally as you mount the stage and become an actual part of the tableau vivant and of the race where the finish line is somewhere at the end of an ascending horizon. Tomáš Džadon’s (1981, Poprad, SK) work often focuses on the contradictions between our rich artisanal cultural traditions and heritage and the mass production prevalent in our contemporary society. Valentino Diego (1978, Torino, IT) works with site specific interventions and playing with our notions of spatial perception. These two different concepts, in combination with the traditional formal approach of Otakar Švec, present us with a novel point of departure for the preception of sculpture as a medium and its historical direction and development. According to Newton’s first law of motion: „An object that is in motion will not change its velocity unelss an unbalanced force acts upon it.” The Valentino – Džadon altermodern racing team could well be considered such an unbalancing force, and one that will certainly affect the outcome of the race. Their resulting collaborative project is an interesting contribution to the critical dialogue about the medium of sculpture and its role and function in contemporary art.