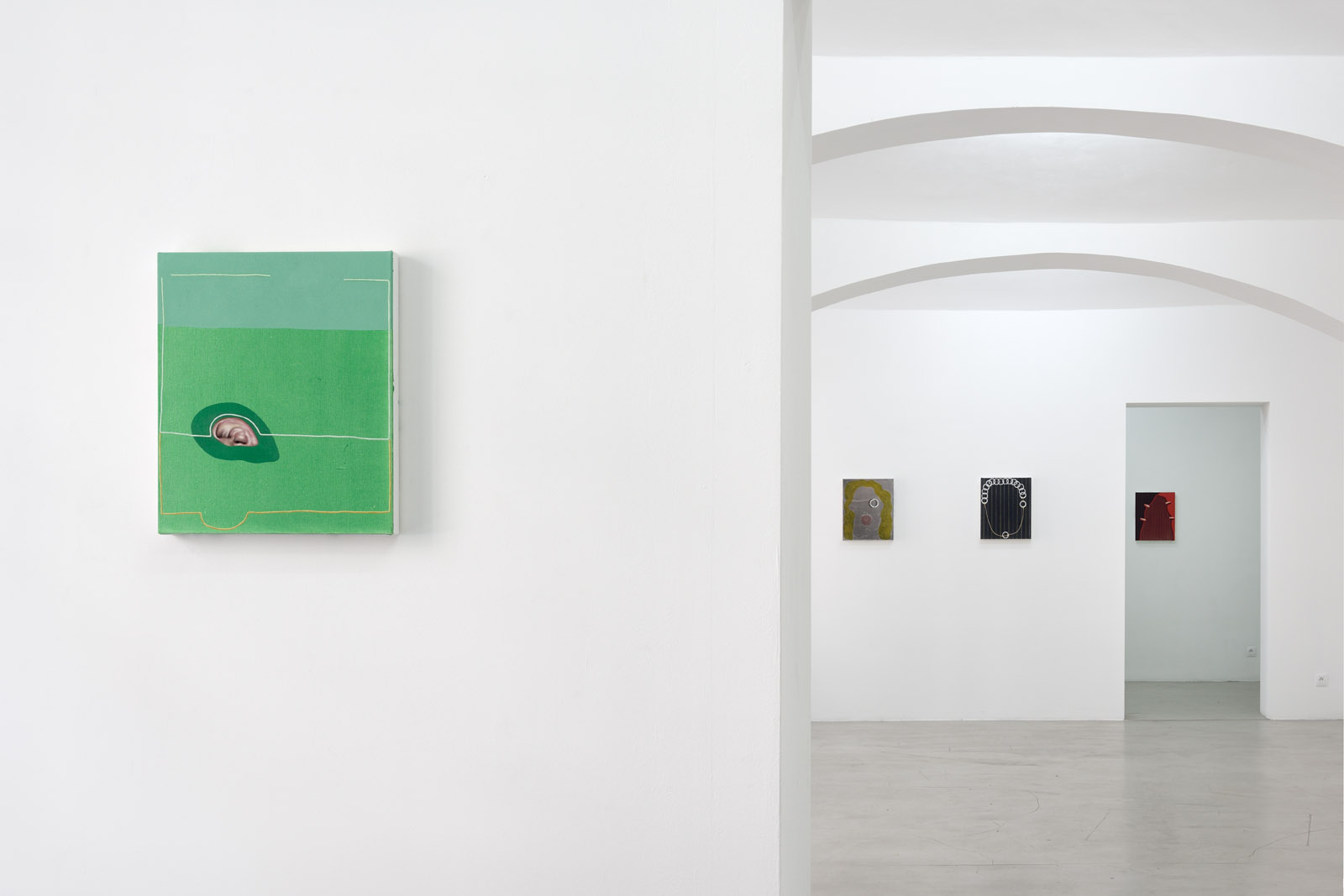 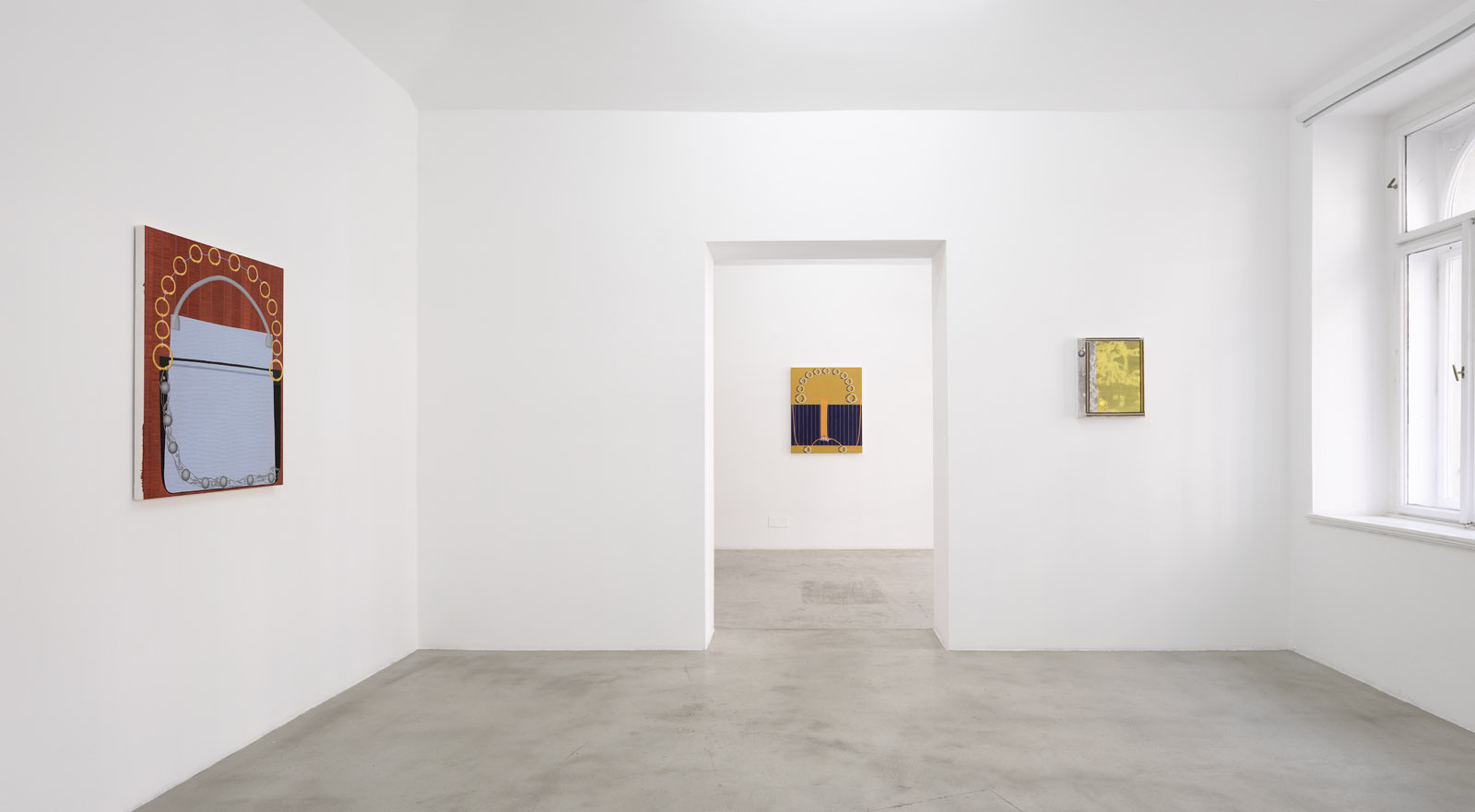 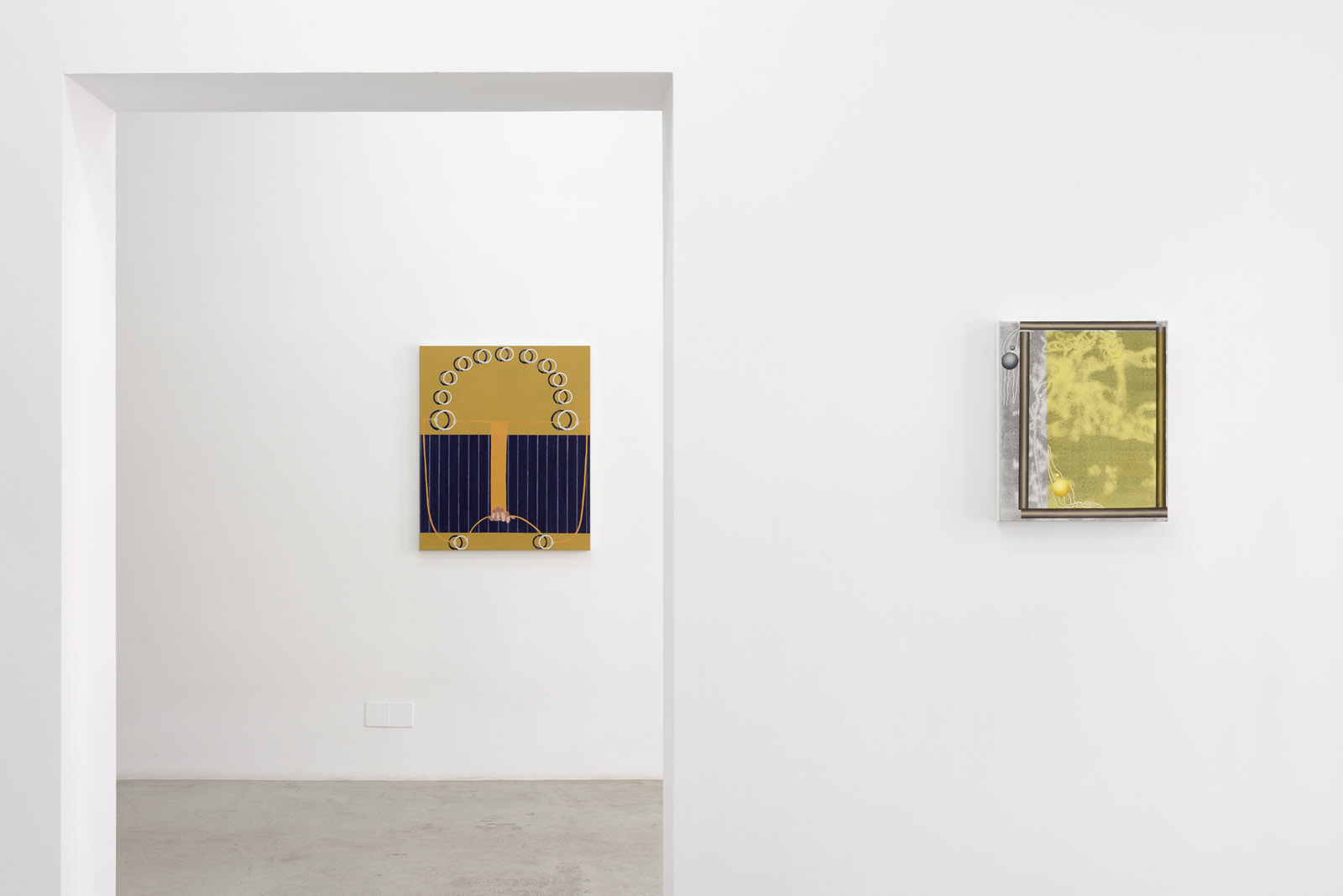 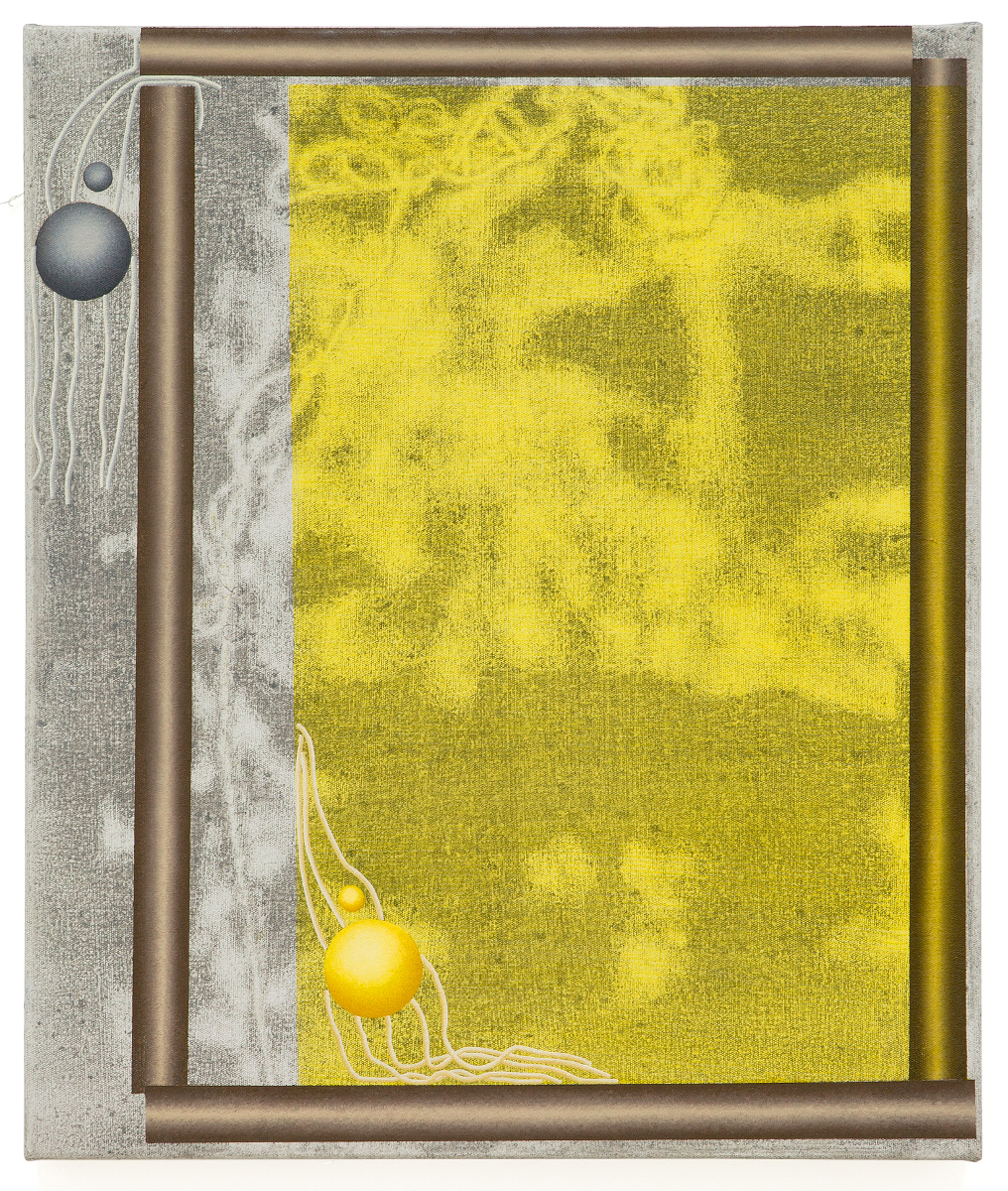 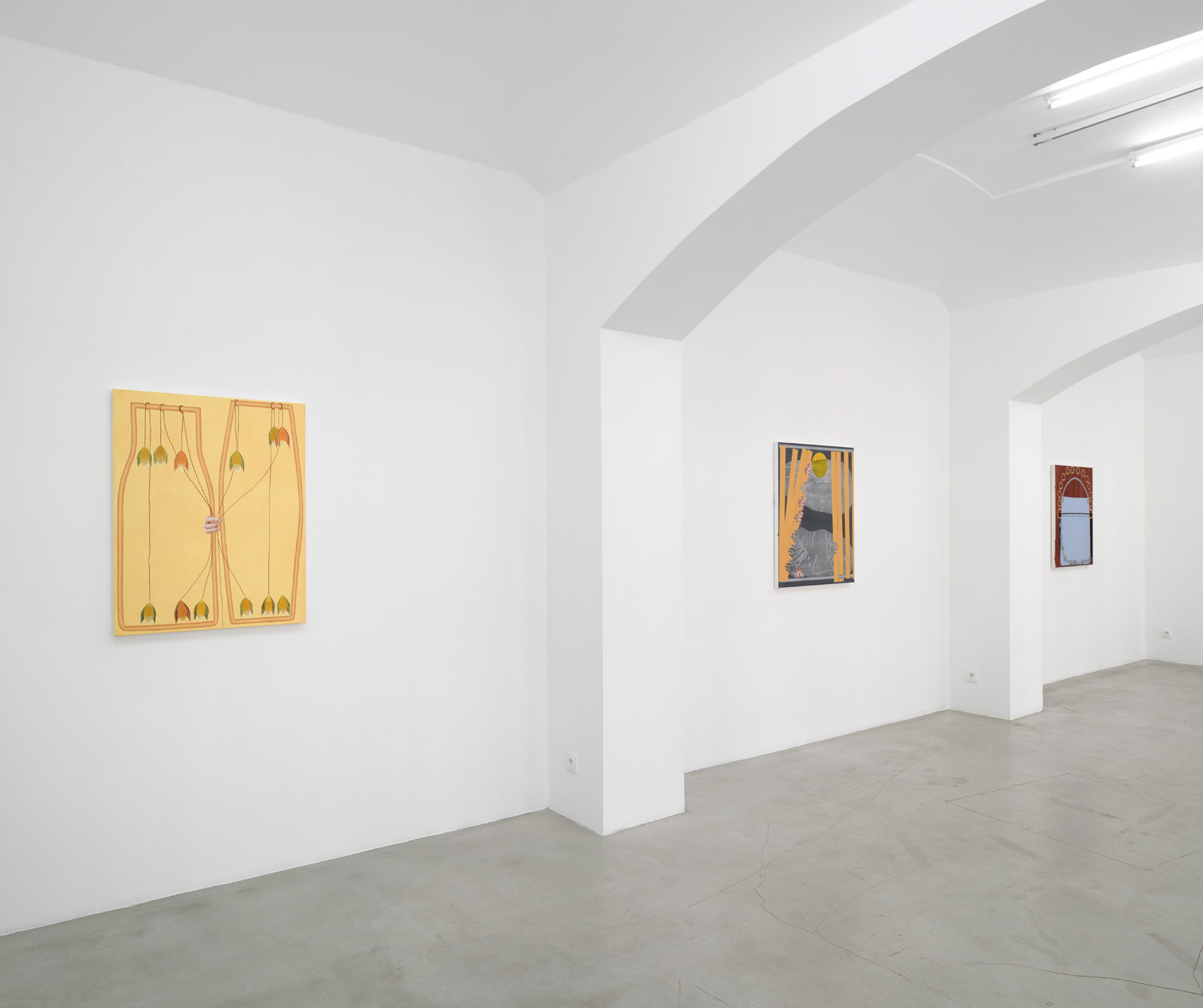 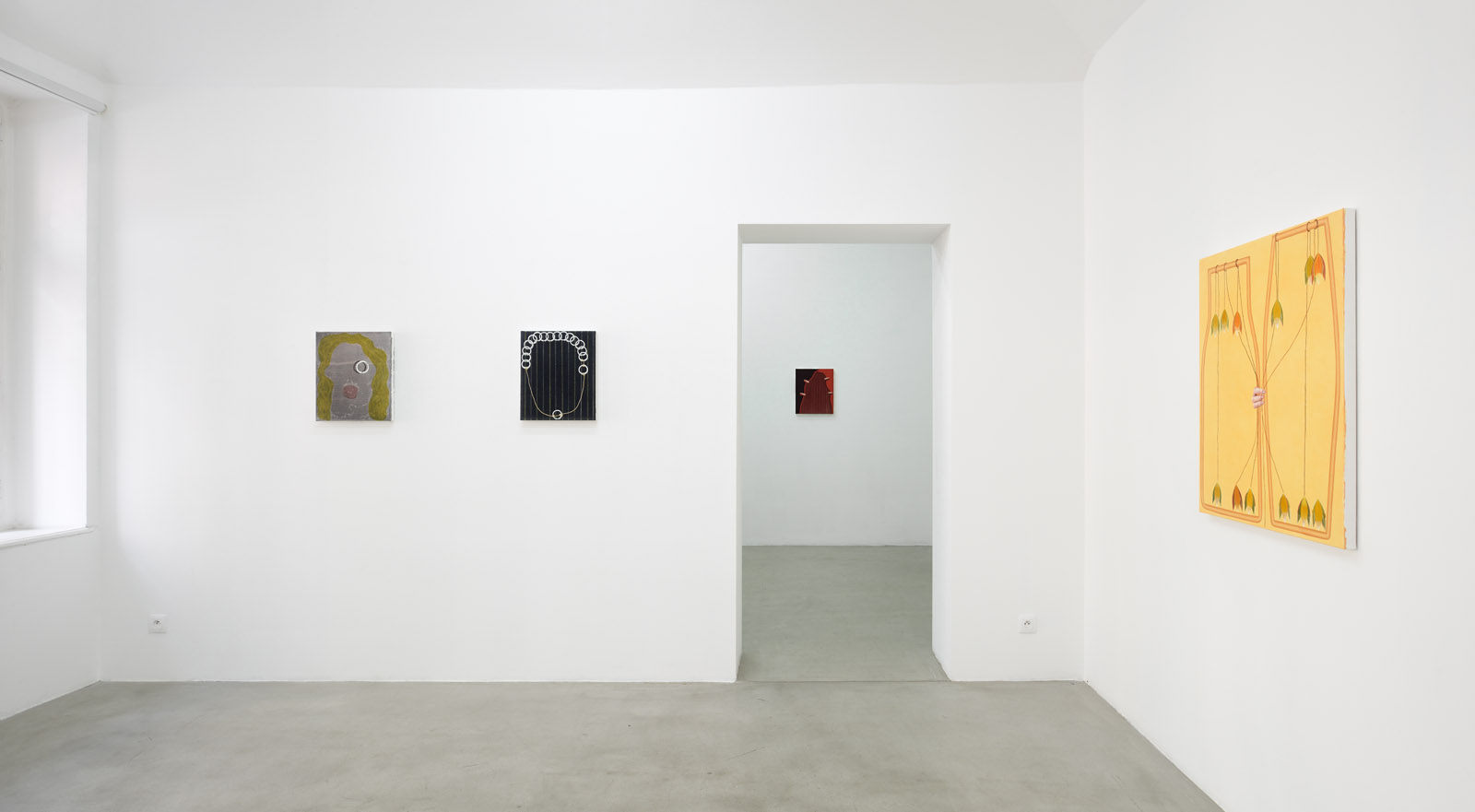 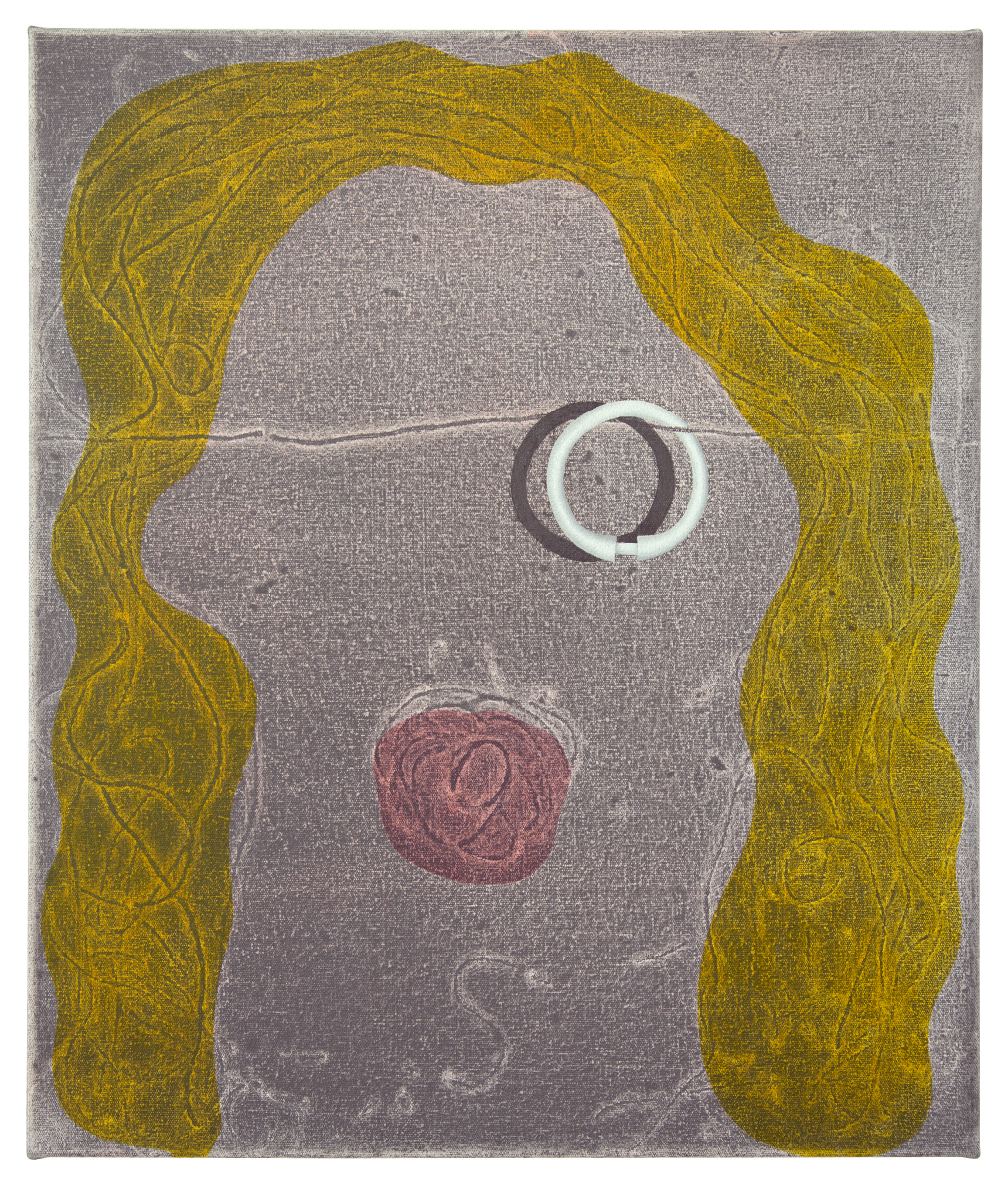 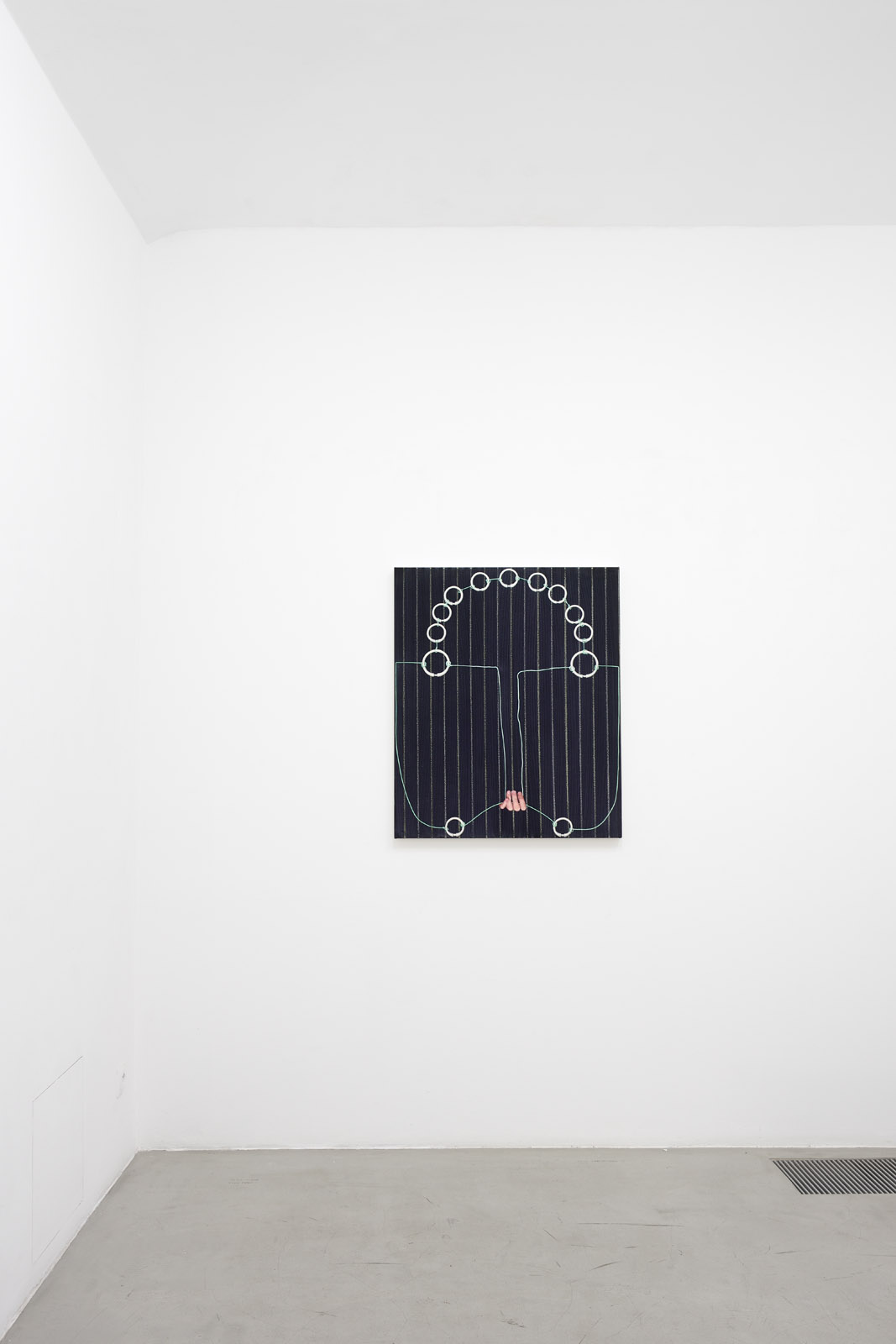 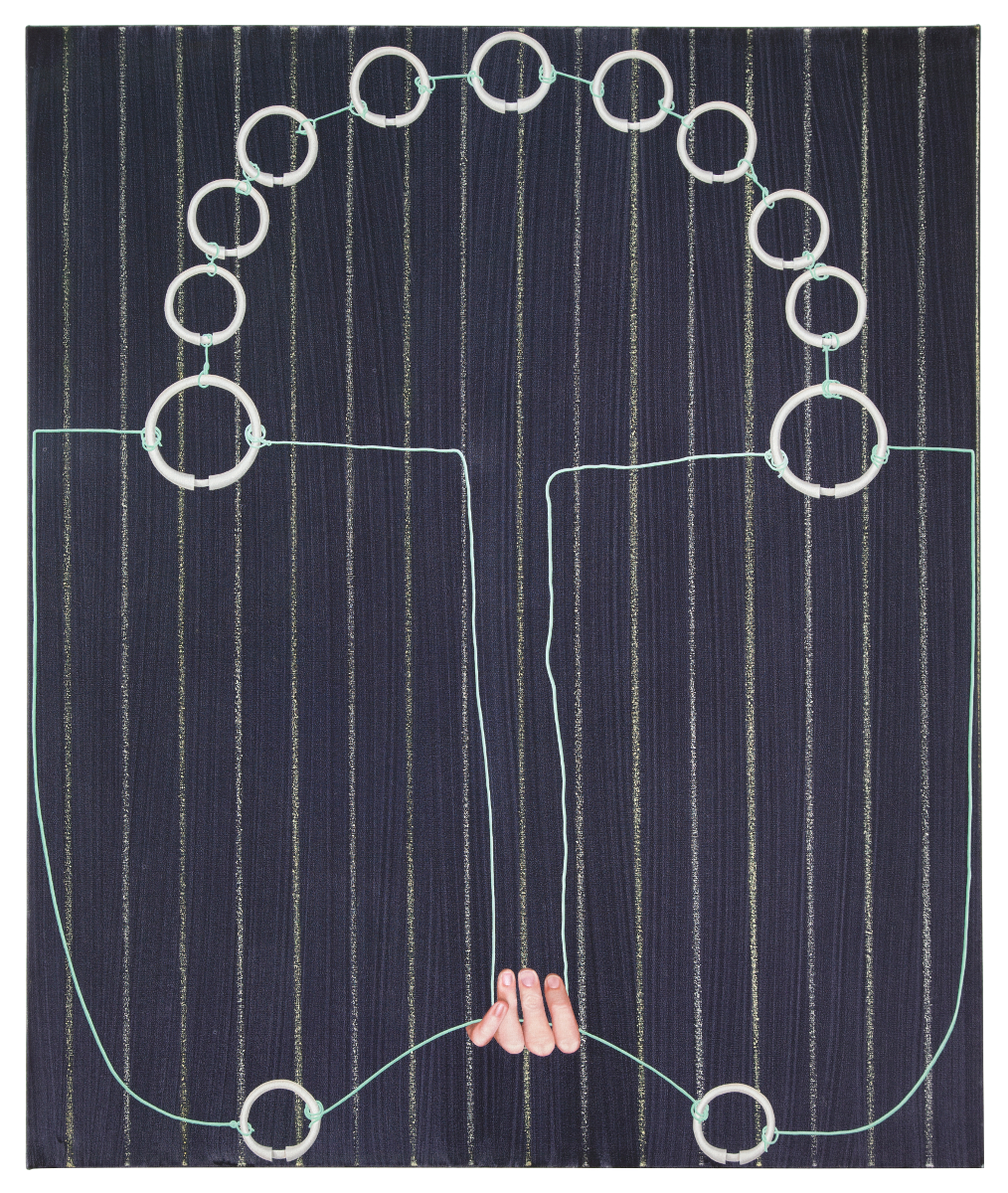 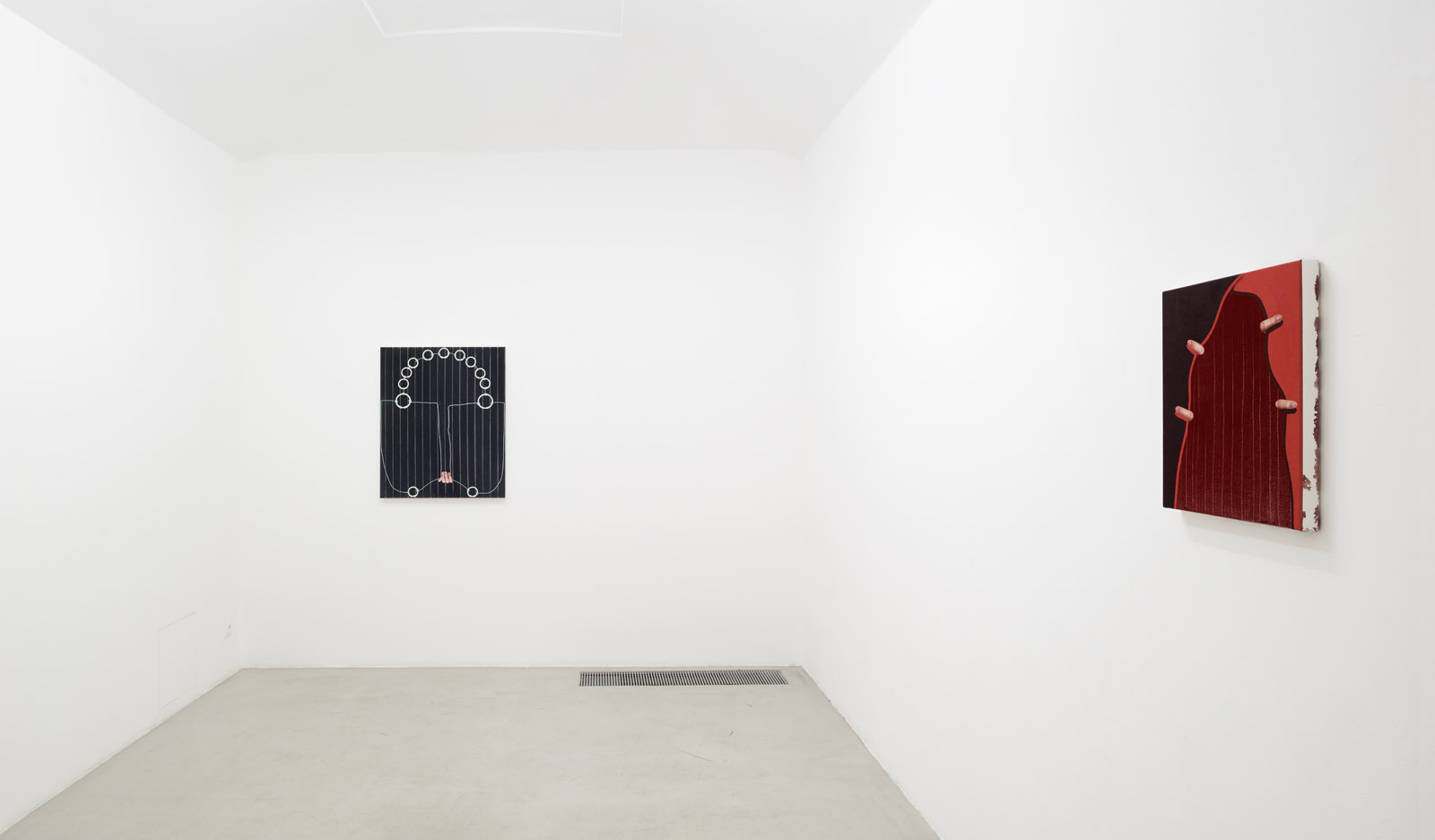 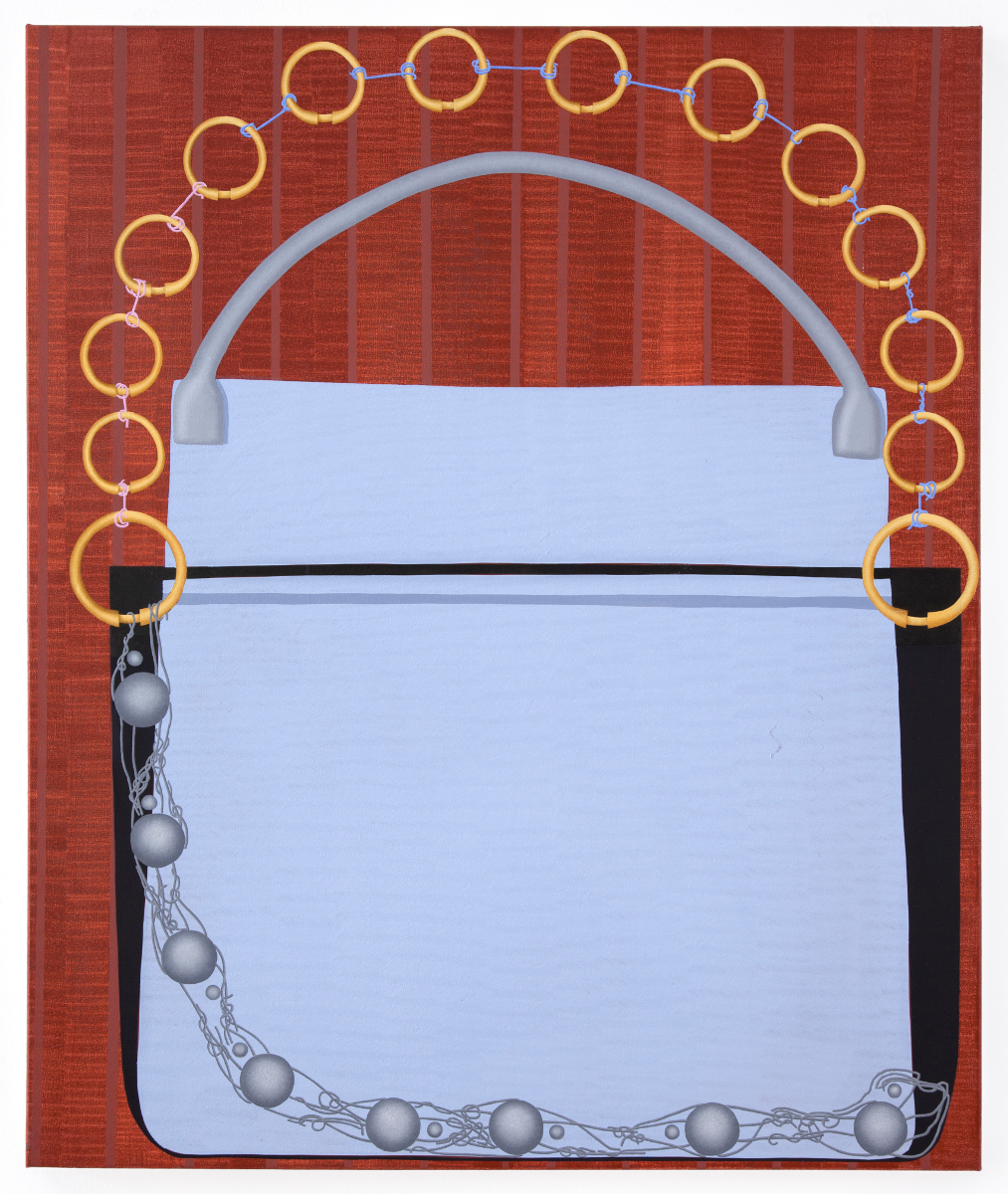 What happens when fingers stop their usual work of touching and pointing, and become hooks for strings instead? Or when shower curtain rings line up side-by-side atop a head to form a curly wig—or when one ring hangs still in the middle of a face, taking the place of the human eye? They get into the canvases of Veronika Pausova, whose painterly lexicon is as distinct as the mathematically exact and yet deviated choreographies these object perform: fingers without arms, an ear without a head, shower rings without a bathroom and spiders without malice. The lexicon is in a state of permanent transformation and shift: the spiders’ legs abandon their taxonomy and thread their way through bathroom rings instead of spinning cobwebs, or, bored on the bottom of a bag flung on the floor, they while away the time imitating the ring’s perfect roundness. The world of these paintings is the world of things in the moments when nobody is looking.

However, things are not that simple. If there is a narrative outlined on the backdrop of bodily fragments, objects and natural elements, it is not based on the evocation or reenactment of stories. It is rather a structural narrative, its animating principle the ubiquitous tying of individual parts into mobile constellations. Serially multiplying on the geometrically composed surface of the canvases, these rhythmic repetitions separate objects from their usual function. The logic of such repetition is clear: try to repeat the same word in quick succession and it will slip out of its semantic grid; the same happens to the flowers, rings and fingers.

The real drama occurs on the edges of the canvas, where the individual elements struggle against the relentless rules of the painterly grid and the right angles of the framing. The frolicsome lexicon of things is strictly structured by the grammar of the surface. Having escaped from causality and indulging in joyful purposelessness, it is the untamed things—animals, objects, and body parts—that have the last word. Why should fingers serve only as appendage to the clumsy body, when they can free themselves of it and act instead as hooks that supervise the punctuation of the paintings? Why should the rings waste their precise geometry on a daily bathroom routine when they can compose a portrait of an absent figure or recompose into the shape of an architectonic arch? The canvases hum with the tension between these emancipated things and the pictorial grammar to which they must adhere. It is the process of rearrangement, reframing and repainting that dislocates things from their purpose, and forms the narrative core of the images.

Veronika Pausova’s paintings are all set in a time when nobody is looking—and yet the viewer gets a chance to look here. The painting with an ear, peacefully lying on a green surface, is neither a homage to David Lynch, nor a memory of delirious van Gogh. It is an ear without murder and tragedy, serving as a template for marking out the field; a part of human grammar which, rather than allegorically resounding with inner musical tones, asks us to listen with its stoic peace. It is us who should move and bend down to it as to a seashell forever singing.

Veronika Pausova was born in Prague, Czech Republic and lives and works in Toronto, Canada. Pausova received her BFA from Glasgow School of Art in 2009 and her MFA from Virginia Commonwealth University in 2013. She has had recent solo and two person exhibitions at Franz Kaka, Toronto, Canada; Simone Subal, New York, NY; Tatjana Pieters, Ghent, Belgium; Motel Gallery, Brooklyn, NY; and SARDINE Gallery, Brooklyn, NY. She has been in group exhibitions at Andrehn Schiptjenko; Stockholm, Sweden; Peana Projects, Monterrey, Mexico; 11R, NYC, New York; Simone Subal, NYC, New York; and Bureau, NYC, New York. For the past few months Veronika has been an artist in residence at hunt kastner. During this time she made the paintings for her show, “Drawing the Curtain”.