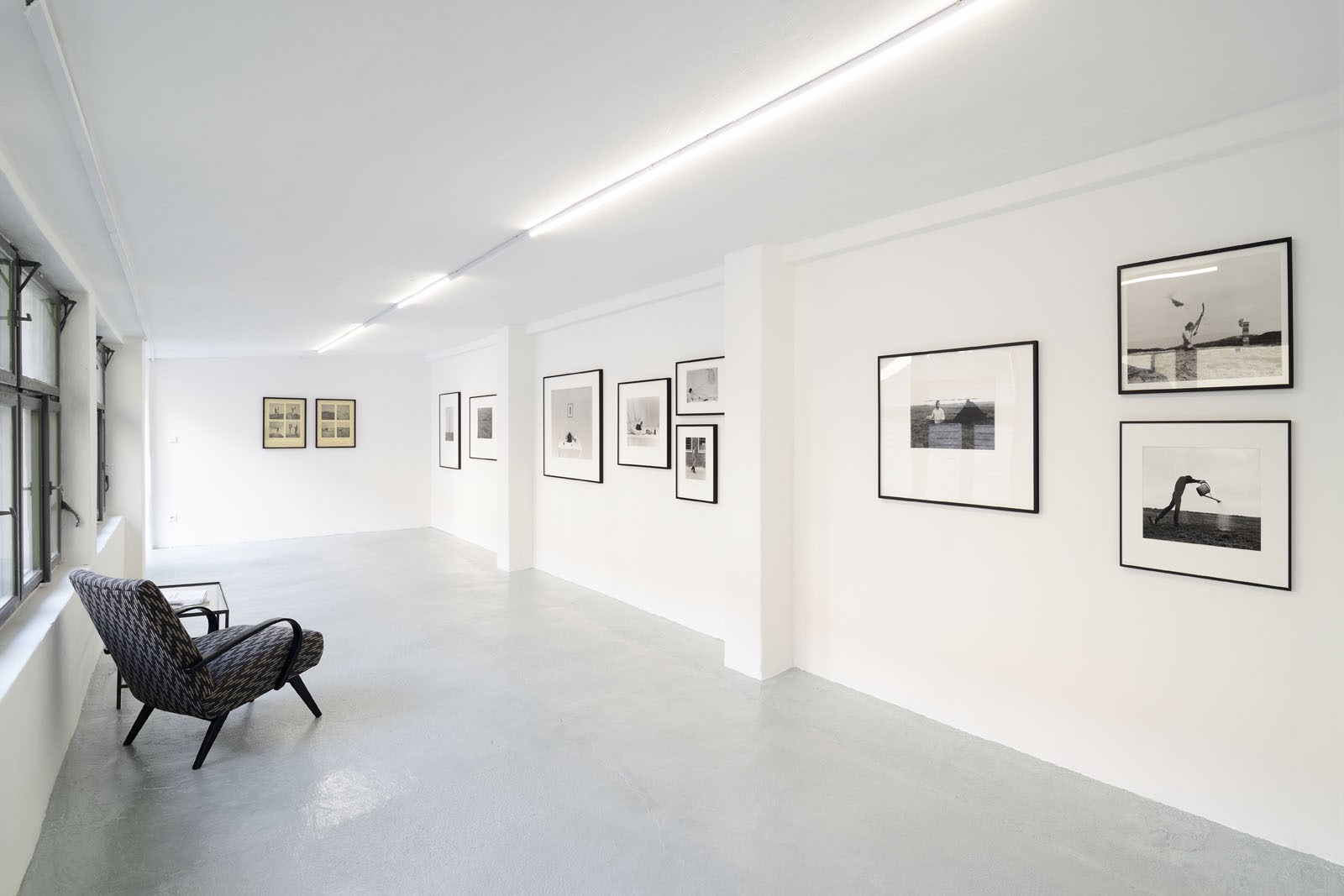 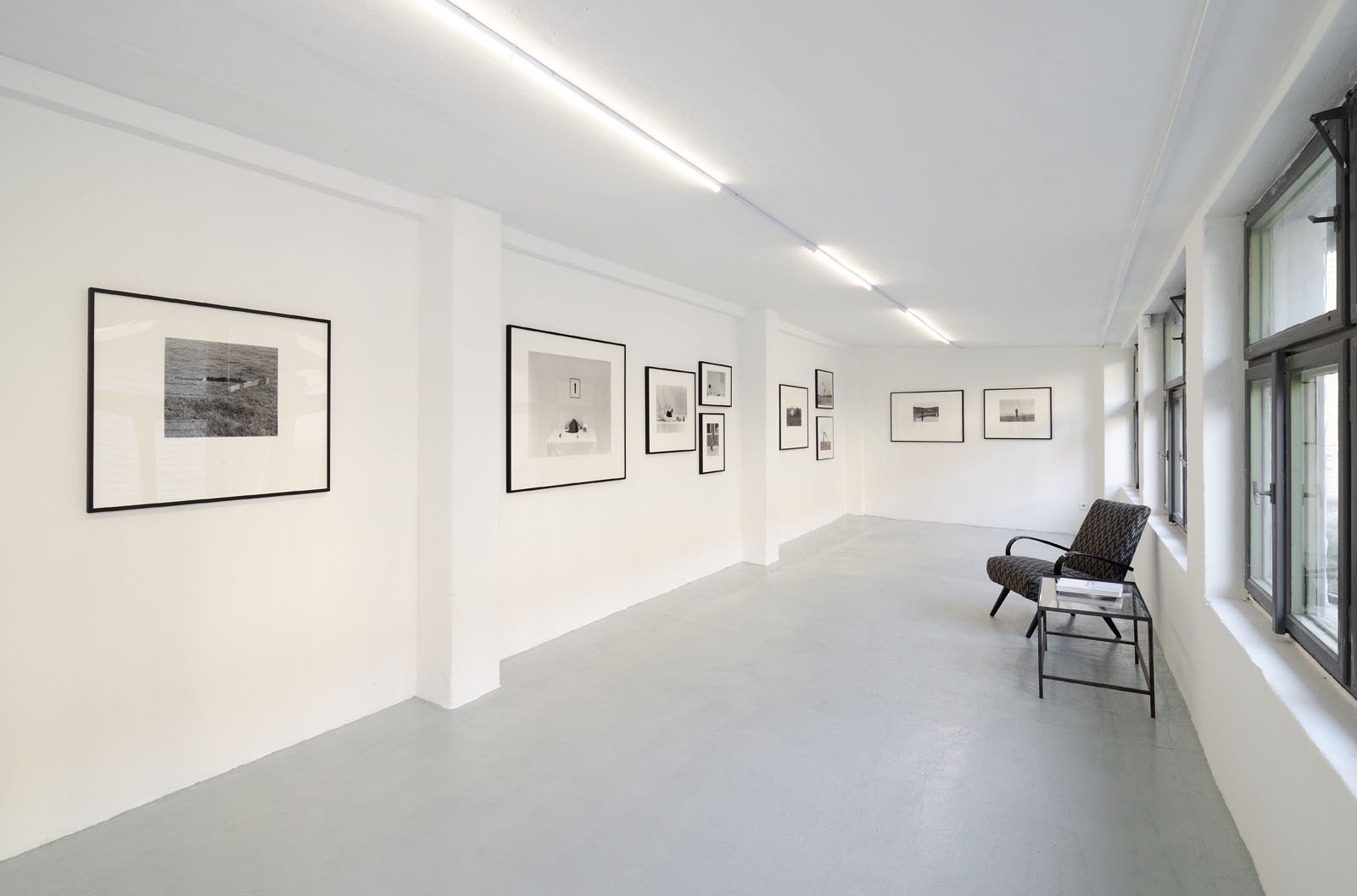 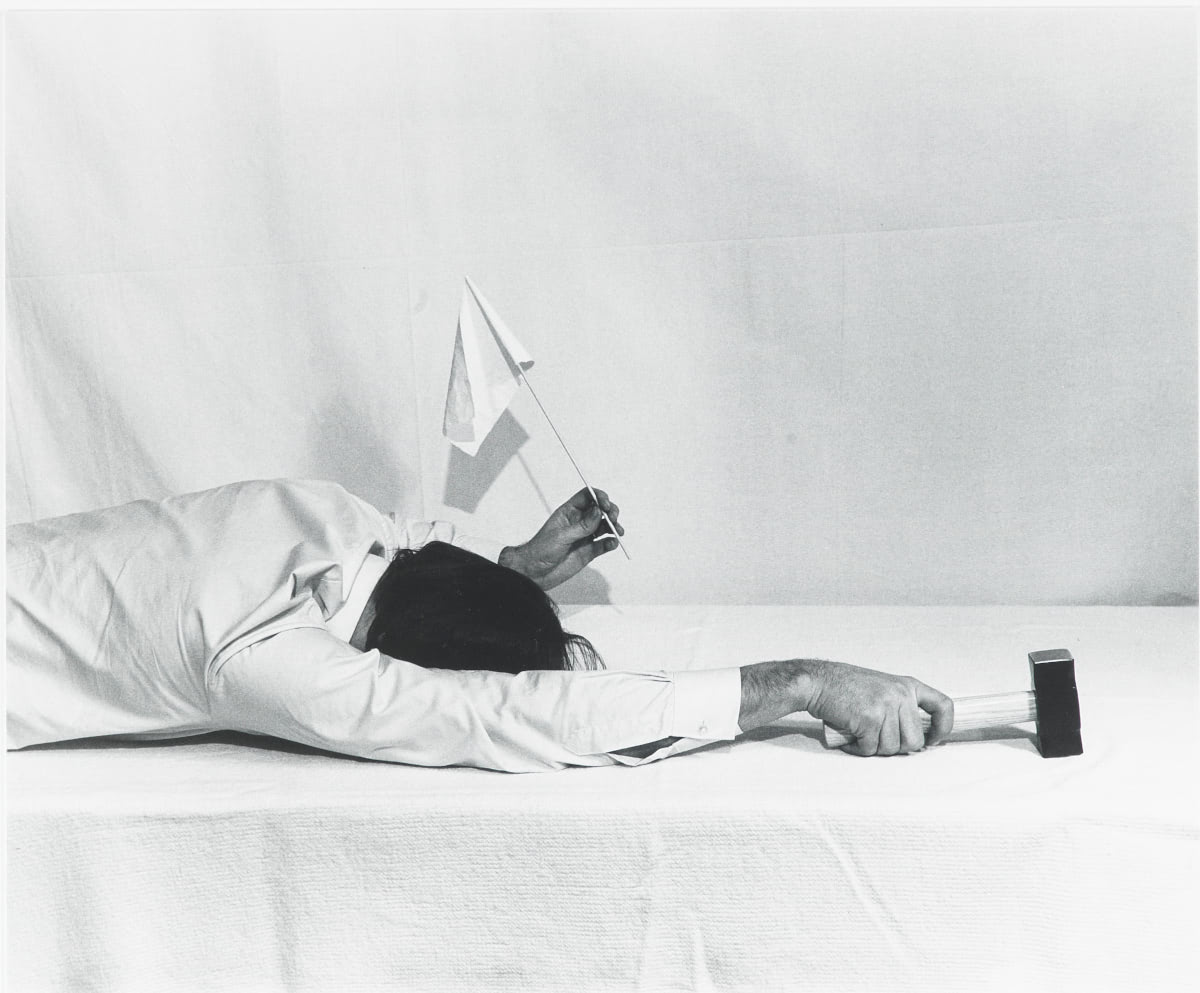 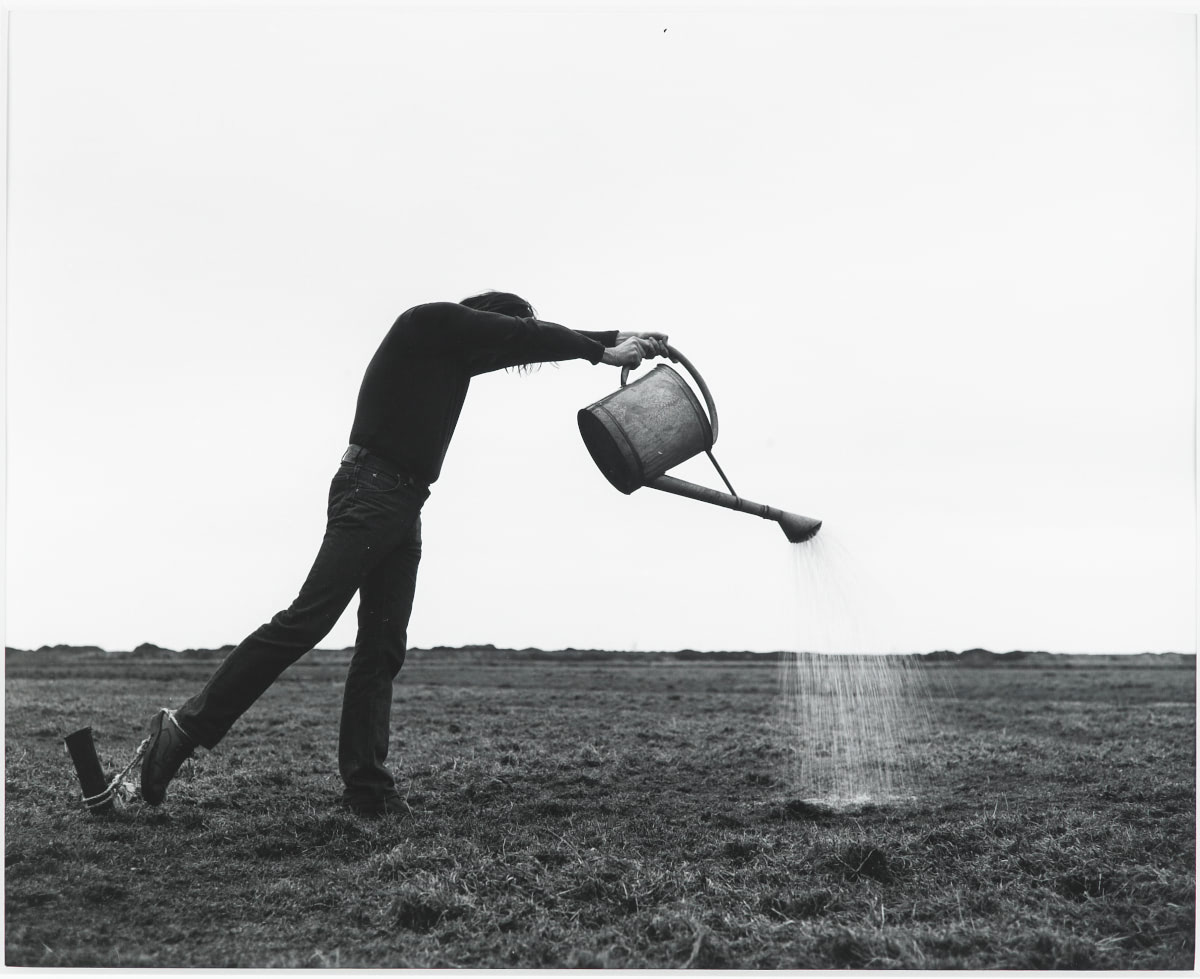 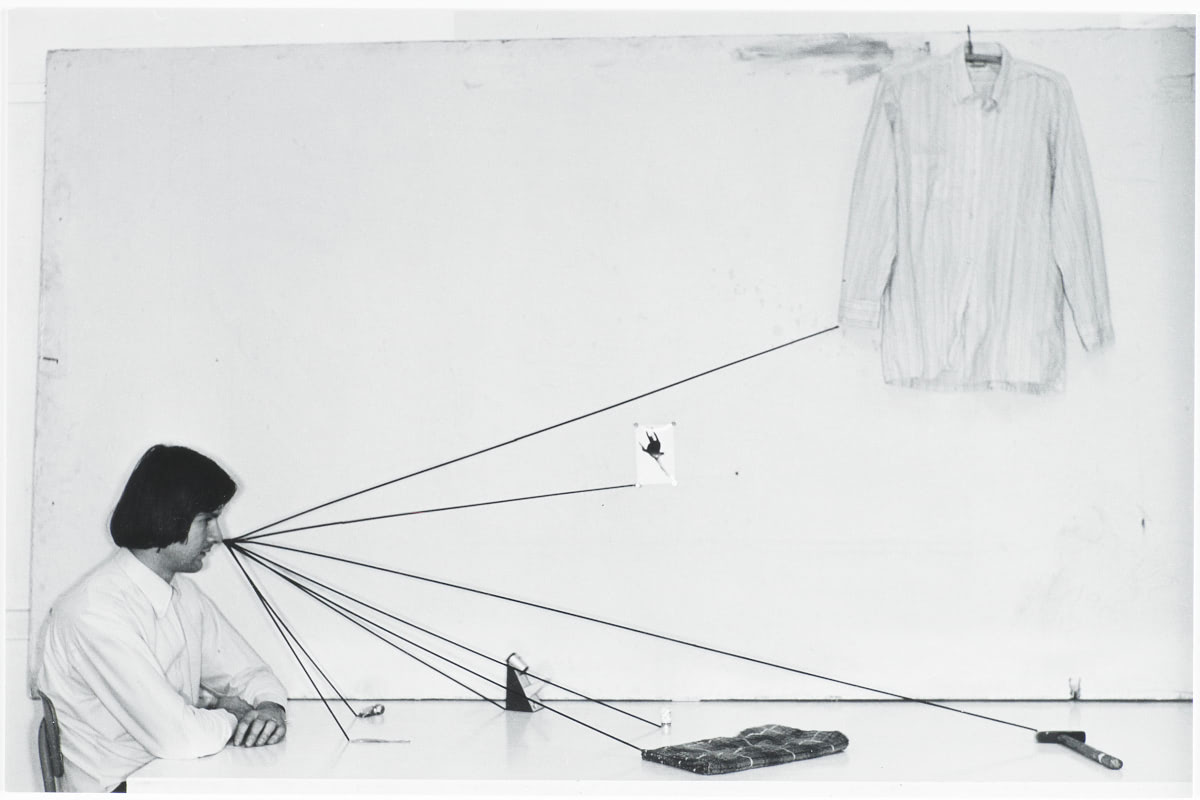 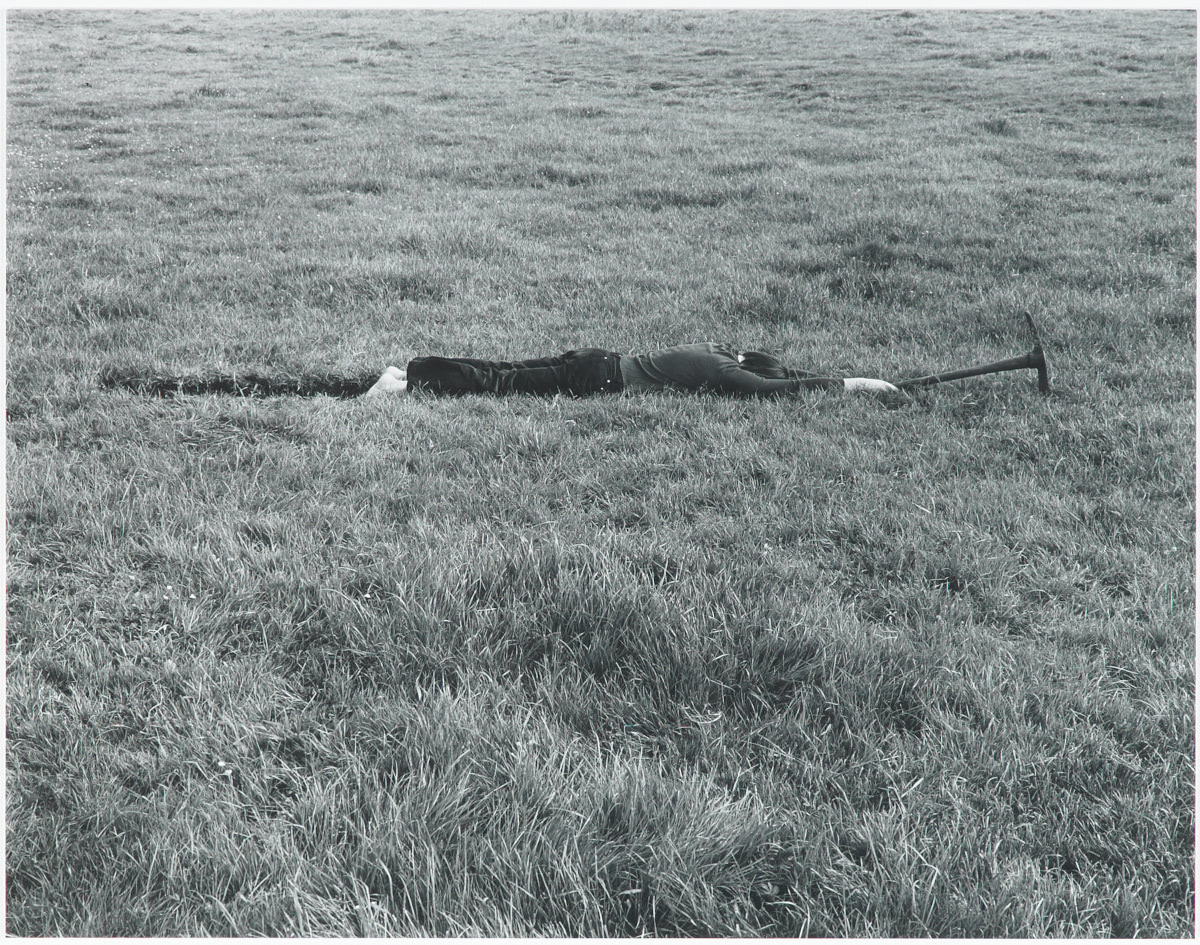 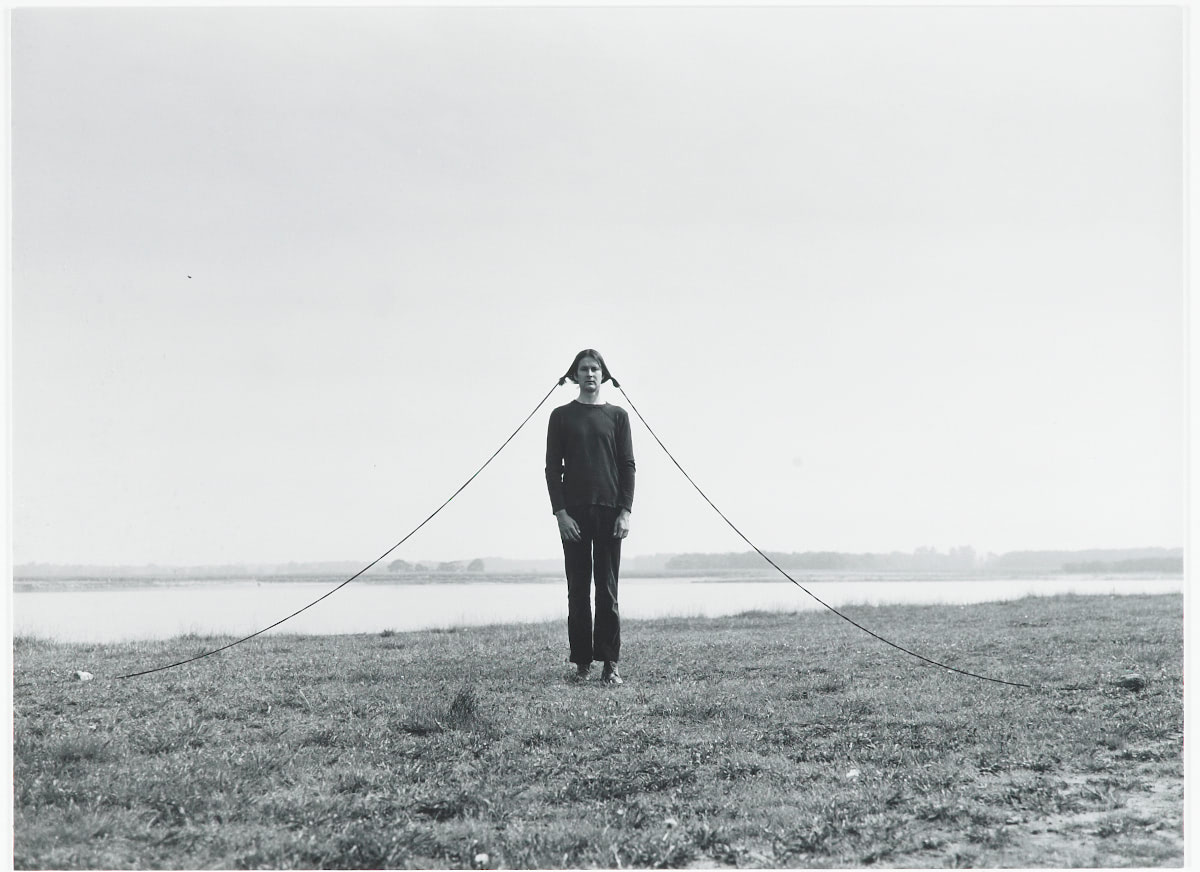 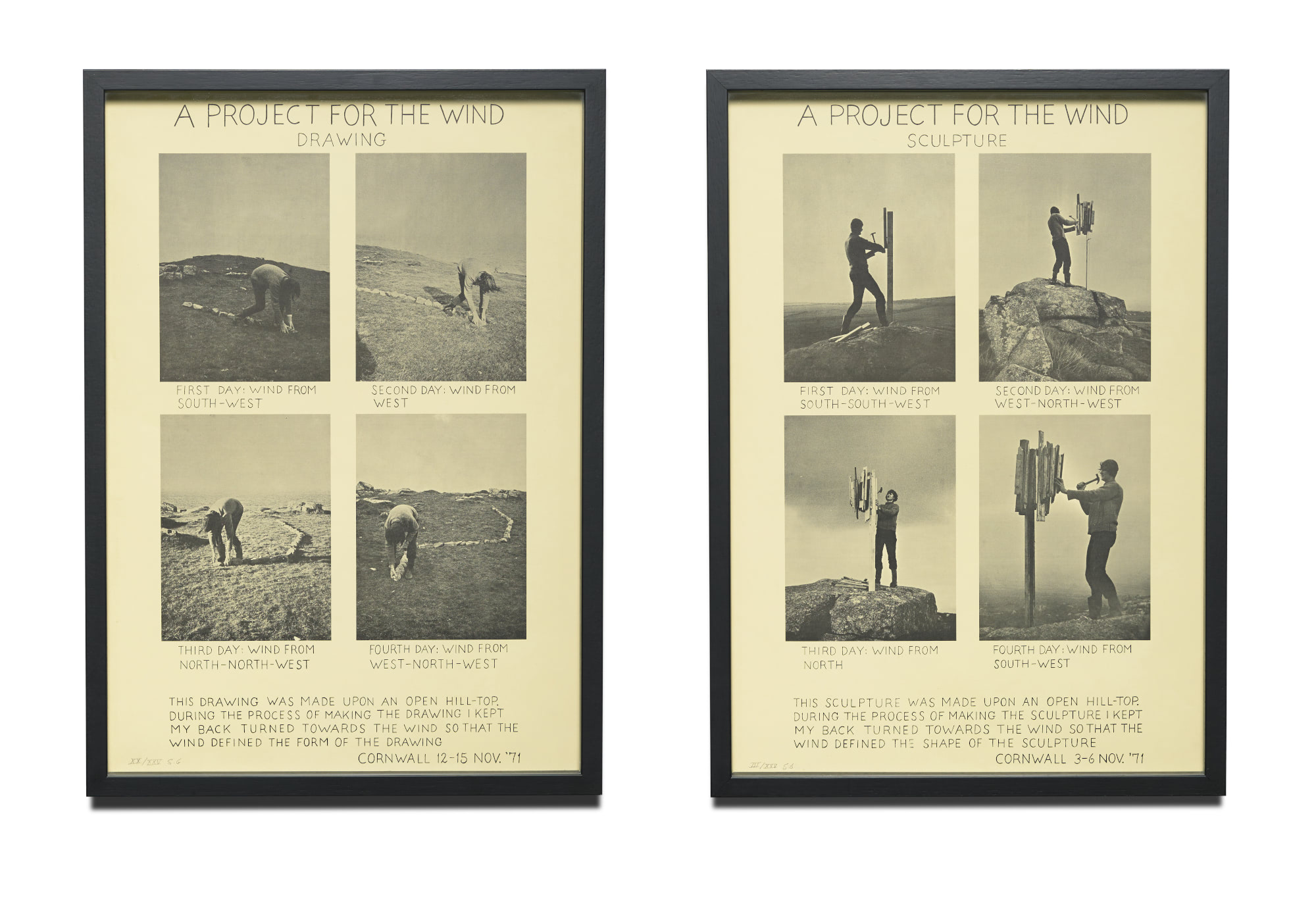 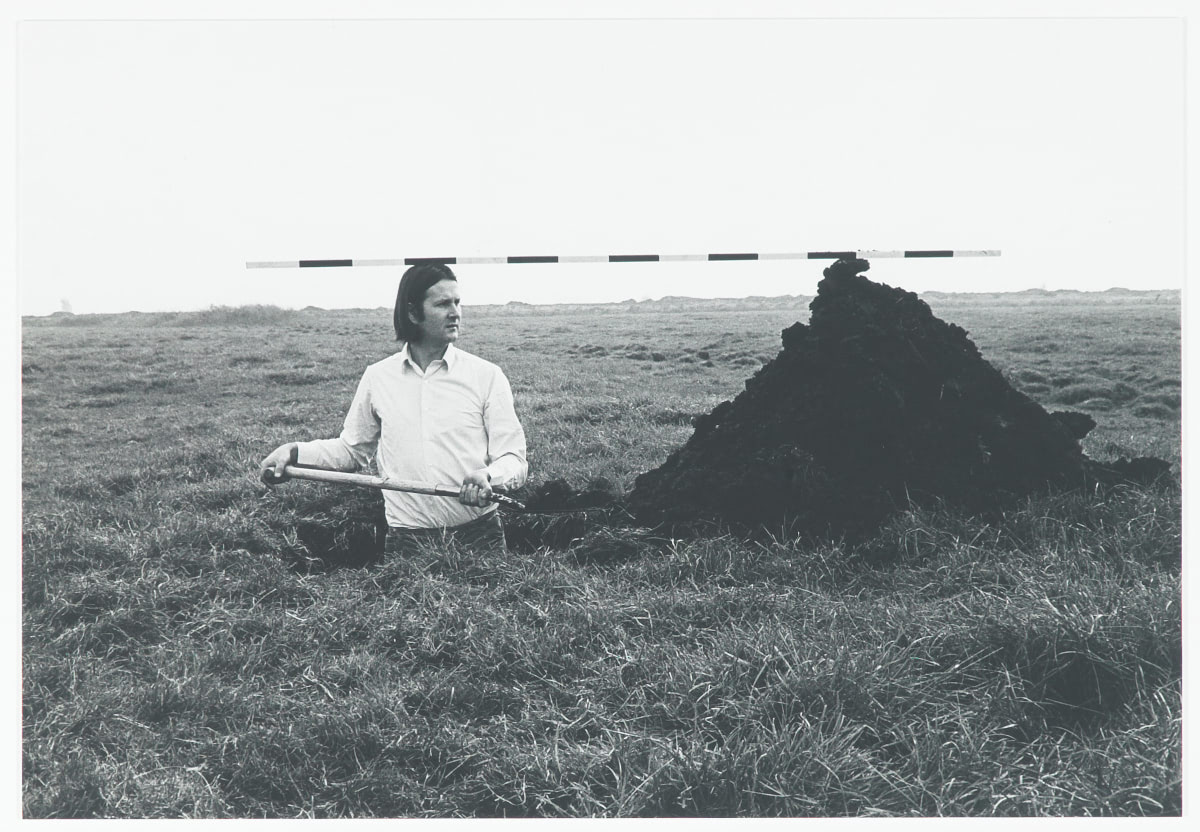 hunt kastner is very pleased to present an exhibition of work by the Icelandic artist Sigurður Guðmundsson, organized in cooperation with i8 gallery in Reykjavik as part of the 2020 SUMO Prague gallery co-op event. The exhibition, entitled “Journey of Being”, presents a selection of early works from the artist’s iconic series “Situations”. While the works from this series have been exhibited internationally many times over the years, they retain a timeless topicality, conveying a basic statement about the never-ending idiosyncrasies of human existence, to which we can all relate.

The exhibition, consisting of fifteen, mostly black and white, photographic works from 1971-80 of staged moments enacted by the artist, almost immediately brings to mind some of the work done by Czechoslovak artists from this period – the documented performances or happenings of Jiří Kovanda, Marian Palla, Karel Miller, Vladimir Hlavík or Petr Štembera, for example. The spiritual and immaterial values prevalent in the Fluxus movement throughout the 1960s and 70s, and expressed in Sigurður Guðmundsson’s early work and philosophy, were also beginning to influence the work of Czechoslovak artists around the same time. Not surprisingly, through the invitation of Jiří Valoch, Guðmundsson’s work was exhibited in Brno in 1972 at Dům umění – Brno House of Arts, although the artist never had the opportunity to visit the former Czechoslovakia himself. Imbued with a strong sense of the absurd and the whimsical, but also a distinct gravity and poetry, Guðmundsson’s work embodies a familiar mood of irony, melancholy, resignation and longing for flight.

Guðmundsson is a conceptual artist, and has worked in a wide array of media over the years – photography, text, sculpture, painting and performance. “Situations” are photo-based works because at that moment in time the artist thought photography was the most appropriate medium to give form to his ideas. The artist has repeatedly said that he doesn’t want these works to be viewed as photographs, that he considers them something more like visual poems “filled with memories and impossibilities”. The poetic always has been, and continues to be an essential pre-requisite for his work. The title “Situations” was chosen also as a way to draw attention away from the medium of photography, while the titles of the individual works were selected to fit the spirit of the work. According to Guðmundsson, “the title doesn’t offer any guidance in terms of how to experience the work but is rather a verbal parallel that has the same feeling as the work itself”.

The exhibition begins with two works from 1971, A Project for the Wind – Drawing, and A Project for the Wind Sculpture, made along the seashore in Cornwall, which act almost like captions to describe his process. We feel a hidden or semi-conscious longing to be at one with nature in his work, a desire to be inside the unknown or the impossible, as can been seen in the works Item (where he lies horizontally embedded into the landscape), or Landscape / study (where he stands on the seashore anchored to the ground by 2 lines on each side), from 1977. The theme of balance and harmony also recur in his work, as in Dancing Horizon (1977), where he balances a long wood board on his head while dancing as he breaks through the horizon, or in Rendez-vous (1976), where he attempts to level nature through the simple act of digging a hole with a level on his head. Resignation and melancholy are embodied in the work Untitled from 1974, where the artist walks down the street, hands in the pockets of a raincoat, wearing a dunce-like cone nose attached to his face.

Sigurður Guðmundsson (b. 1942, Reykjavik) studied in Iceland before moving to Amsterdam in the early 1960s. In 1966, he joined the SÚM collective in Iceland, a progressive artist collective whose members were artists, writers, composers. Through their international contacts they were exposed to the ideas of the Fluxus movement, inspired by the informal, unpredictable and non-elitist interest in ordinary daily things. His artworks have been shown in numerous international exhibitions, such as the 37th Venice Biennale, the National Gallery of Iceland, and the Stedelijk Museum in Amsterdam, Moderna Museet, Malmö, Sweden, Baltic Center for Contemporary Art, Gateshead, UK, Pori Art Museum, Finland, just to name a few. The artist currently spends his time between Iceland, The Netherlands and China.