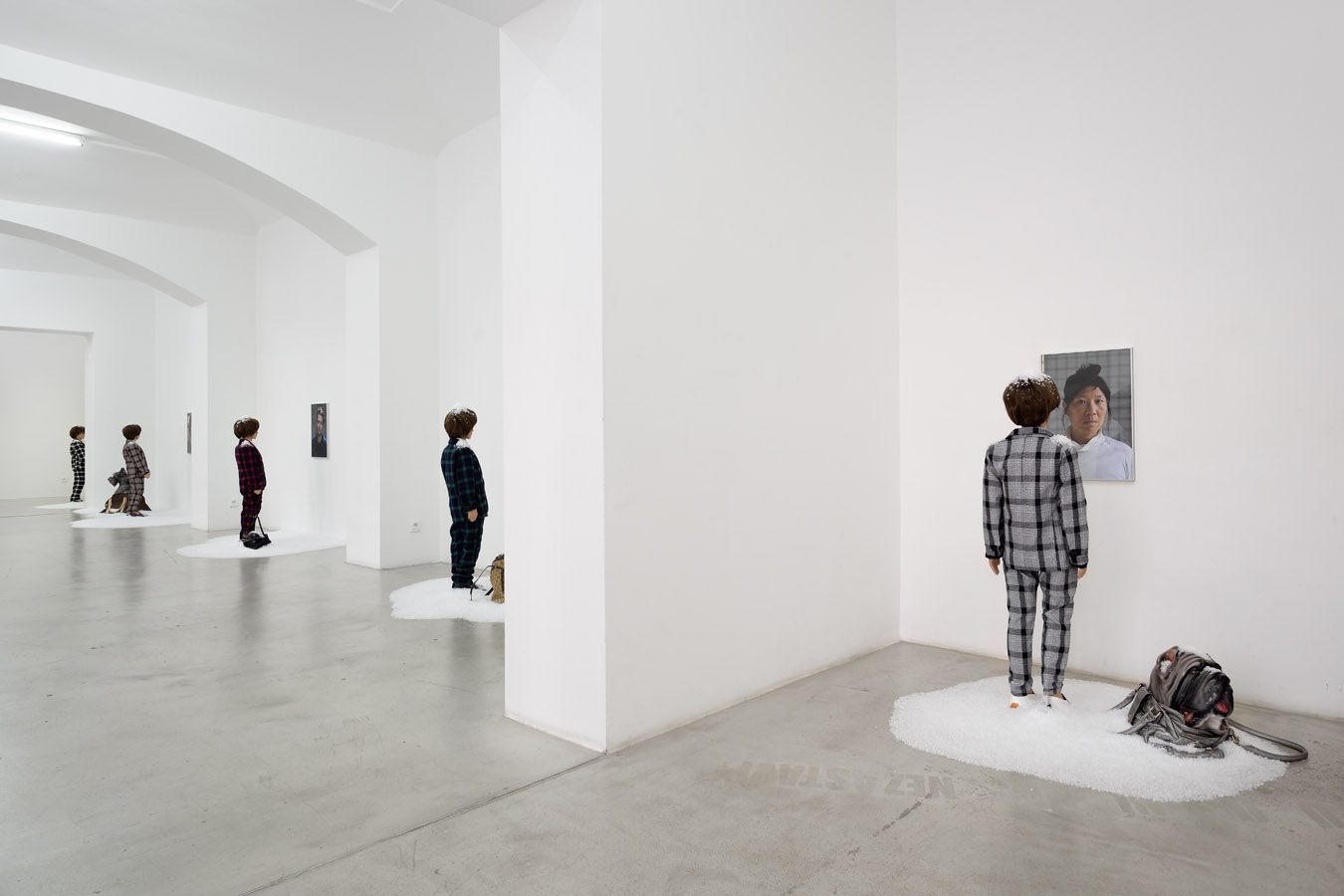 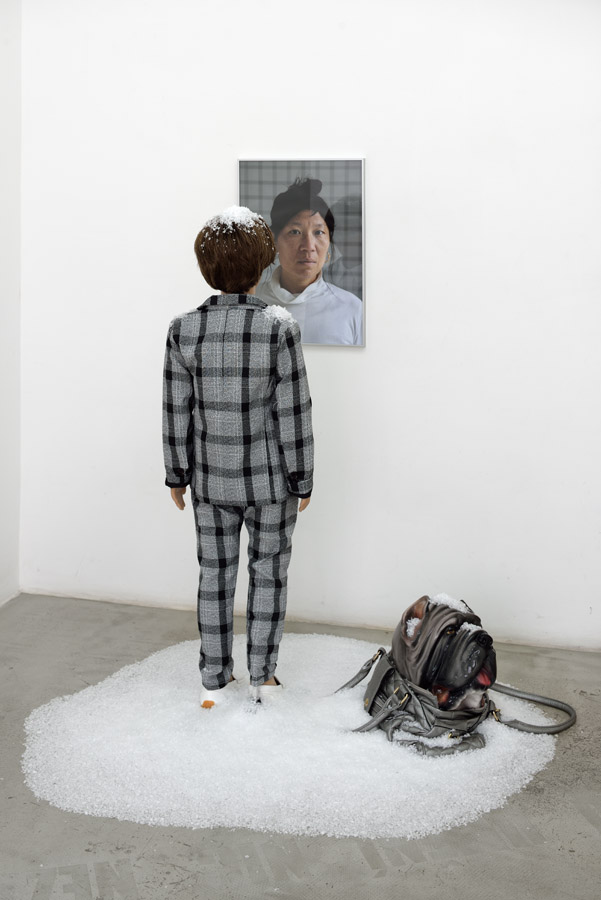 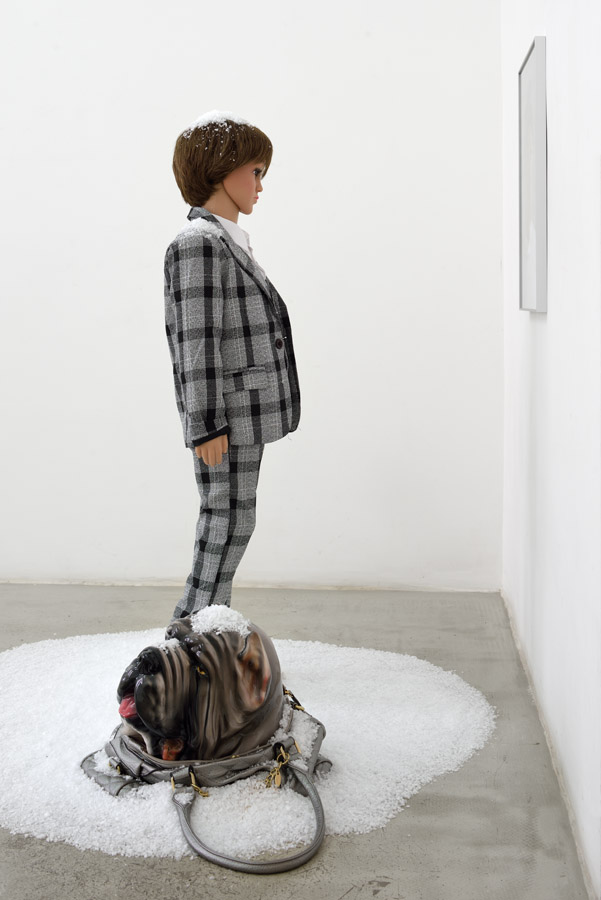 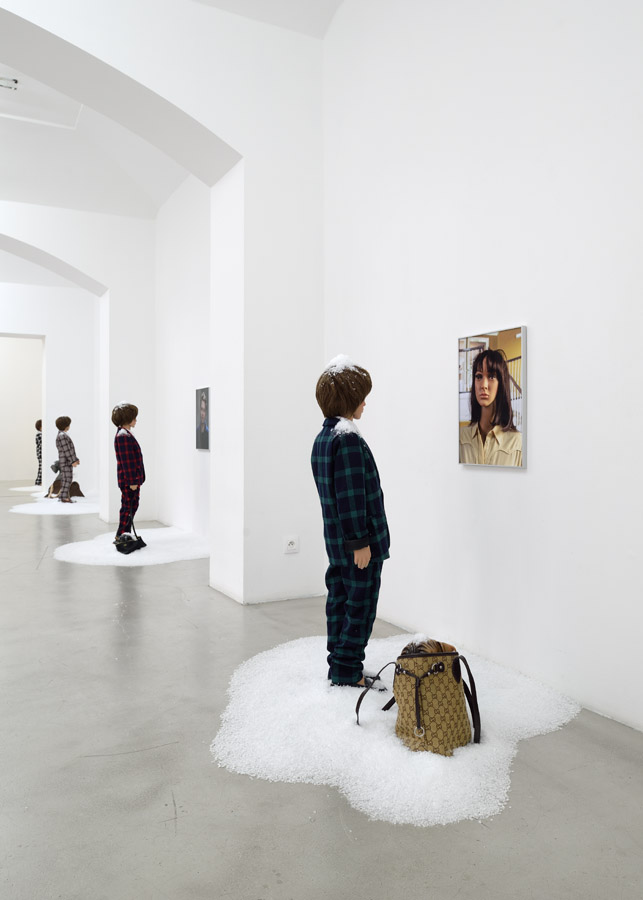 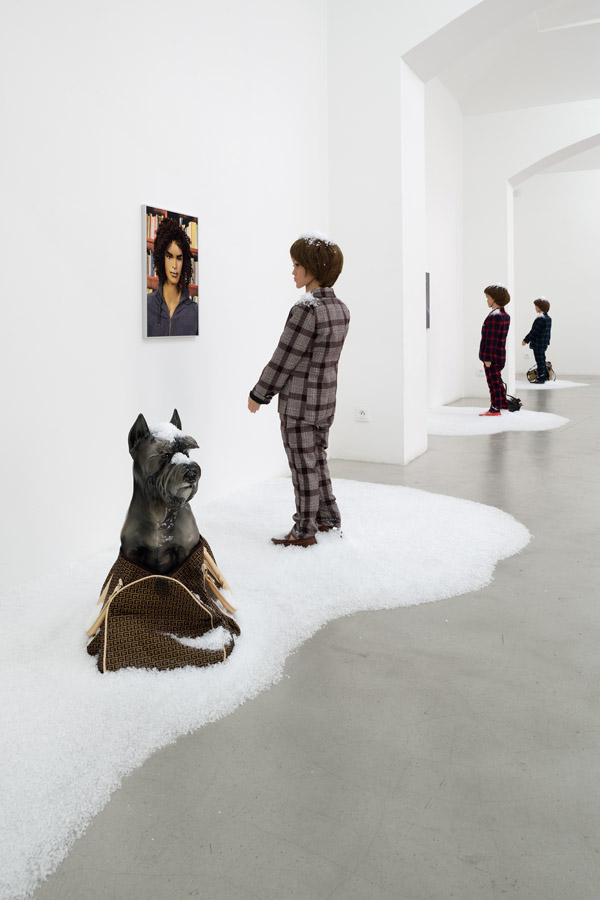 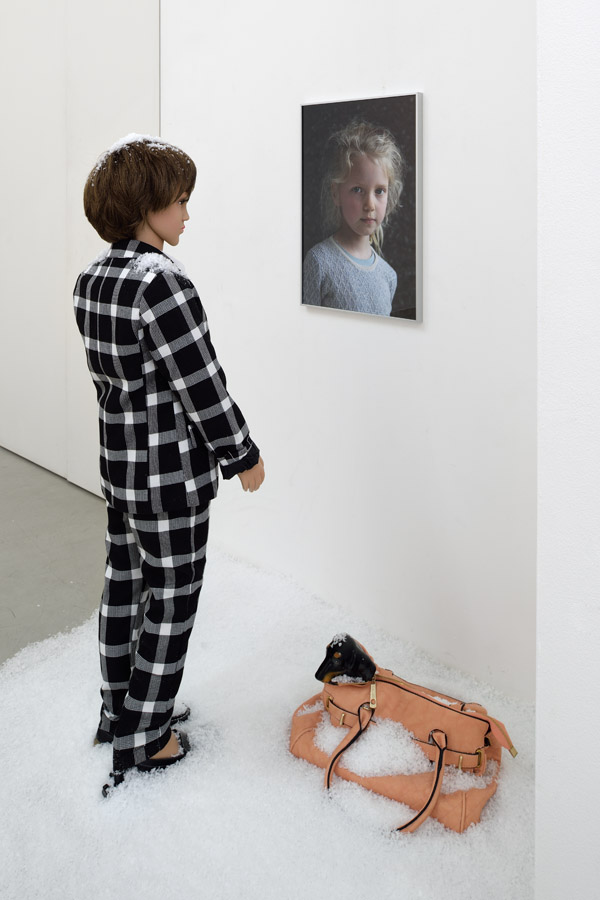 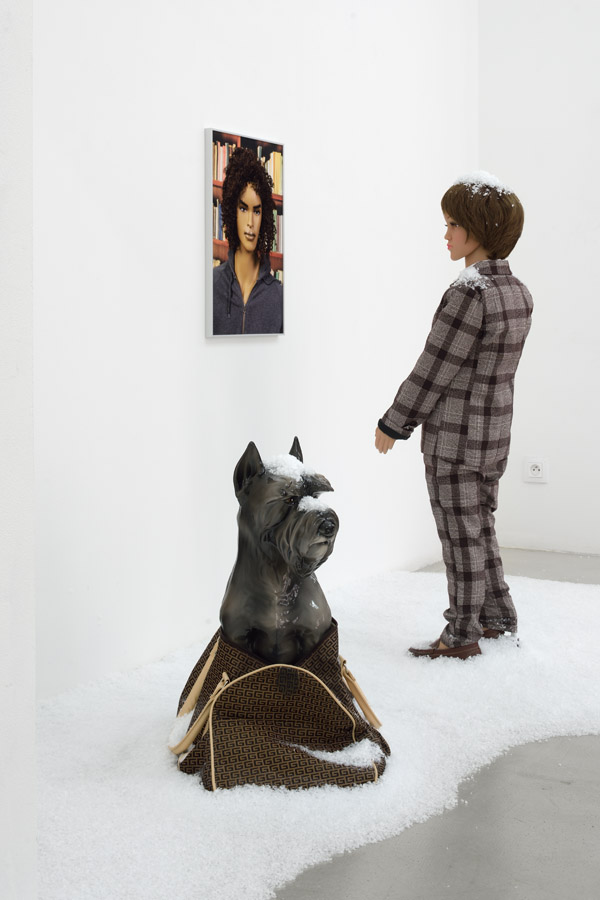 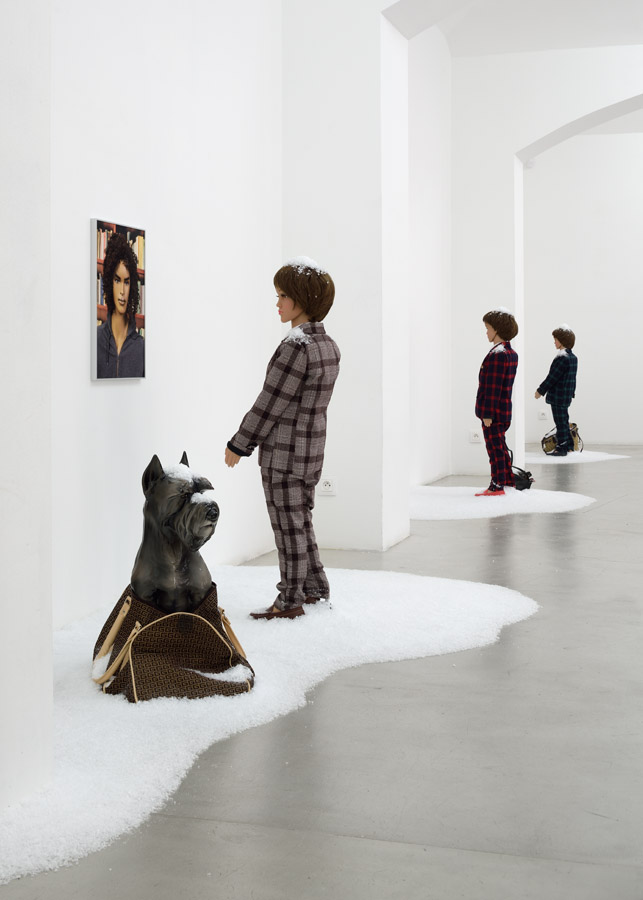 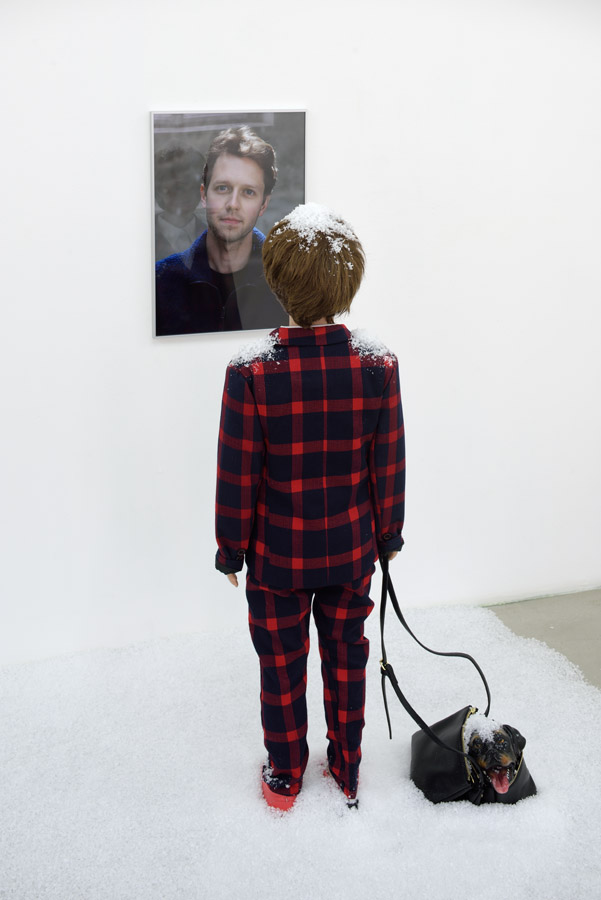 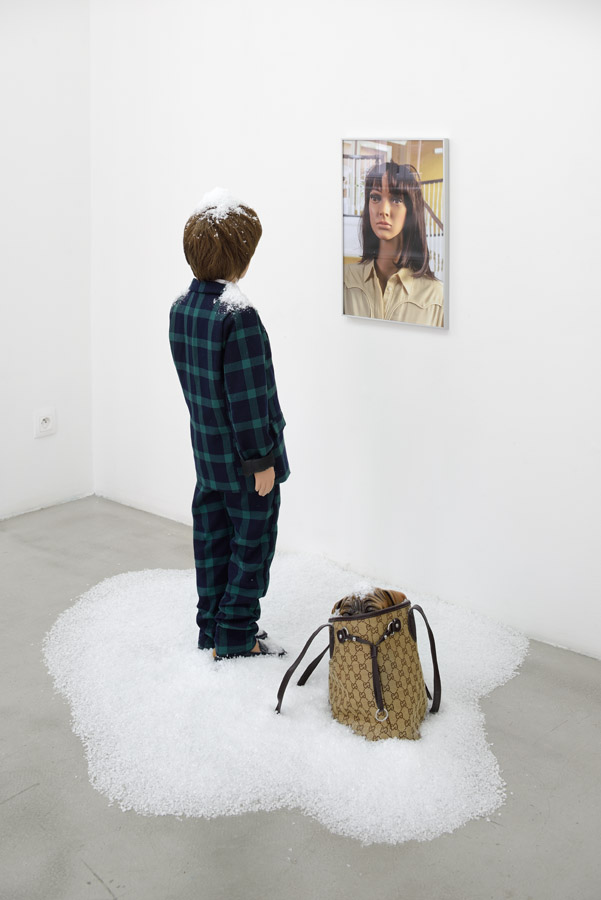 hunt kastner is pleased to present a collaborative exhibition project by Nina Beier (1975, Arhus, Denmark) and John Miller (1954, Cleveland, Ohio, USA), where the artists bring signature elements of their respective practices into dialogue in a series of tableaux that combine sculpture and photography.This new exhibition is a further development of the project “A Wintry Mix” that was presented at the Windows of 80WSE at NYU in New York in 2018.

Nina Beier and John Miller‘s collaborative exhibition, “A True Mirror,” appears to be a portrait gallery attended by wig-wearing child mannequins in checkered suits pausing in deep, motionless contemplation. Each of them is flanked by a porcelain dog in a faux designer bag covered in artificial snow. These scenes give the impression of being ‘frozen’.

Repeated throughout the sequence of gallery spaces said arrangements evoke the dizzying effect of a baroque hall of mirrors. However, when looking at the portraits any reliance on representations and patterns of recognition unveils itself to be a slippery slope. Here repetition disguises its own variability, and it thus conceals difference within itself: Like visual variables in a photographic program, faces of ‘real’ humans alternate with those of ordinarily dressed mannequins all captured in similar generic poses. Every search for ‘frozen events’ in these symbolic surfaces is hopeless. They have already been replaced by states of things, translated into scenes. Ultimately, the pictorial space of the photographic works and the arrangements in the physical rooms of the gallery fuse into a space of mutual significance. In it, the ritualization of models known as ‘programs’ replace the prehistoric magic of myths as media theorist Vilém Flusser would claim.

Similarly, Beier and Miller’s serial photographs convey an alleged objectivity distanced from the temporalities of personal experience. It is not that of a human gaze but of the camera’s very programs. These automatically detect faces, fixate on their ‘landmarks’ like eyes and mouths in a relentless amassing of data in binary forms. Eventually, they can produce new fictions: deepfakes.

When attempting to decode the cultural conditions of these technical images, the categories of the camera not only adjust but also filter them. Individual cultural conditions here become almost illegible. What it gives rise to is a mass culture of cameras adjusted to the norm. Consequently, any evaluations are never simply a matter of individual taste.

In an eerie way, the configurations of borrowed objects in the gallery appear to comply with norms of signification: gendered specific dressing (a men’s suit for children, a women’s bag), fashion-brands and materials as markers for status and class identification (GUCCI handbag, porcelain dog) as well as facial features for human resemblance. But what here represents flesh is in fact plastic; fake snow is not cold, and premature adulthood is just dressing up. These ‘authentic fakes’ are ultimately more real than their originals. What these scenes produce is a hyperreality in which cultural artifacts are perceived as improved copies. Imprisoned in subtle webs of thought-images, Beier and Miller’s signature elements trigger pre-suppositions, both objective and subjective, that weave the light streams of our minds in ways beyond telling, breaking the image of thought. As Flusser said of the photographic apparatus: ‘For this reason, they cannot reduce culture, as was intended, to the lowest common denominator but, on the contrary, they grind it up into amorphous masses.