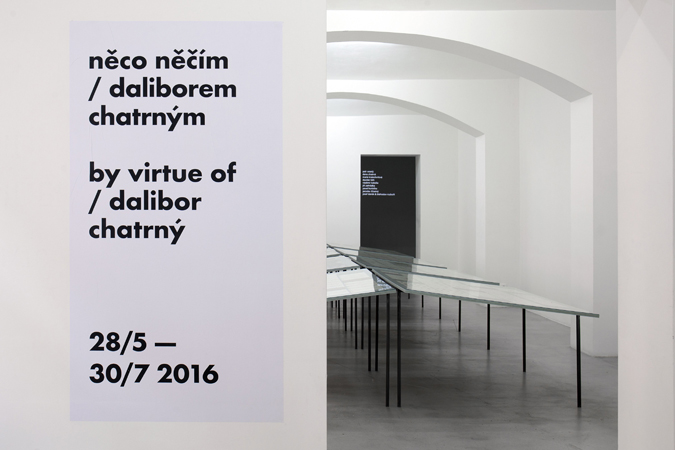 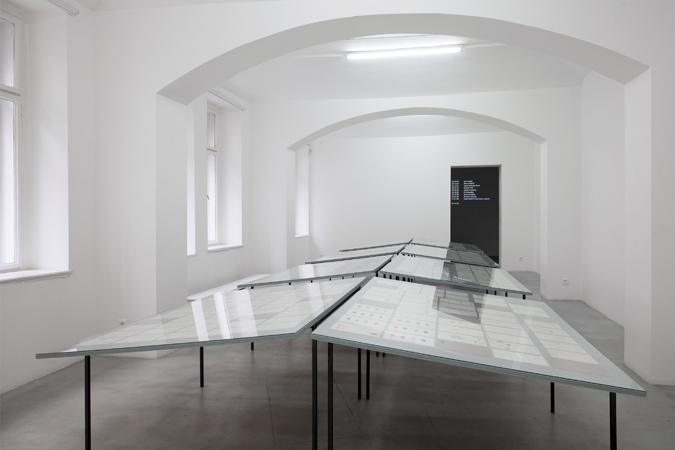 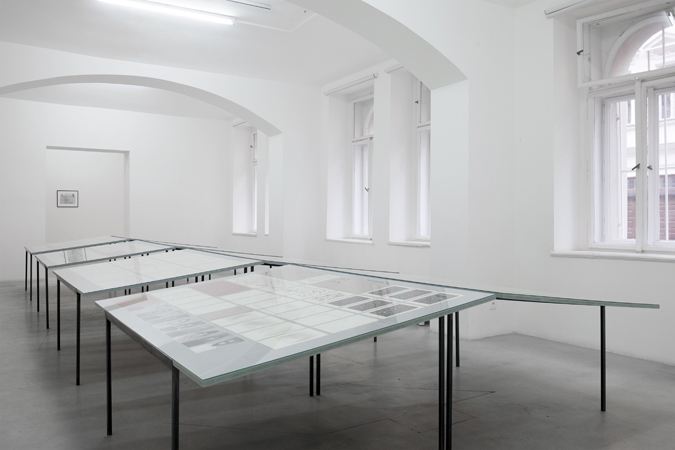 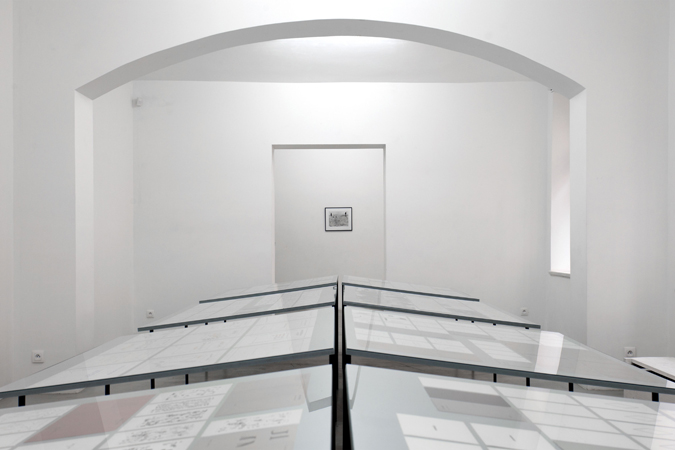 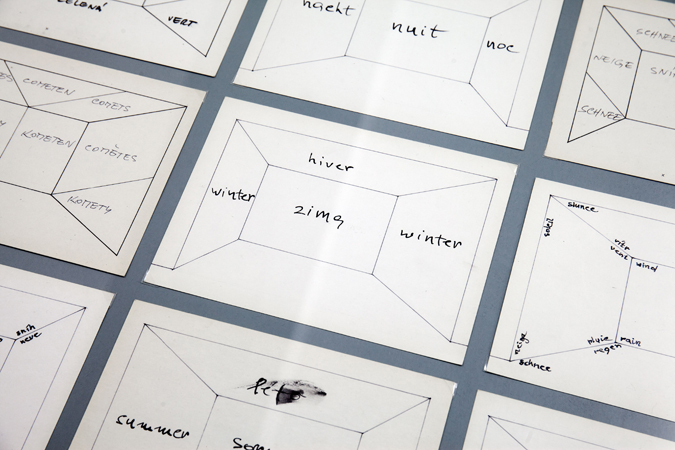 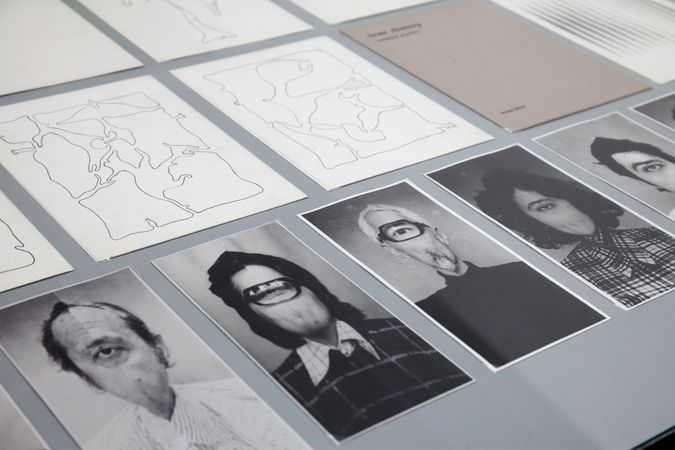 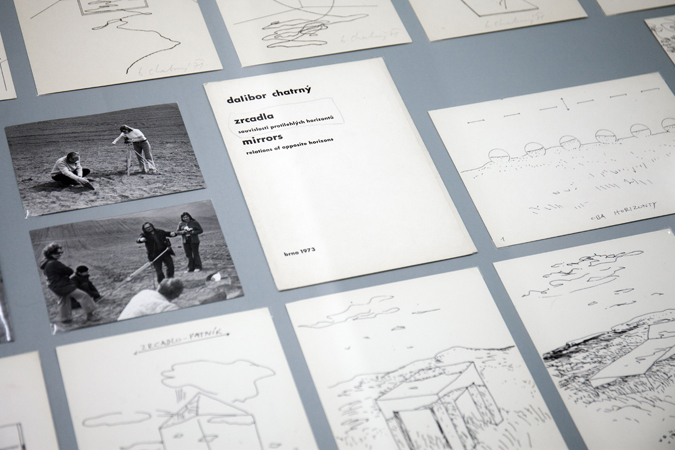 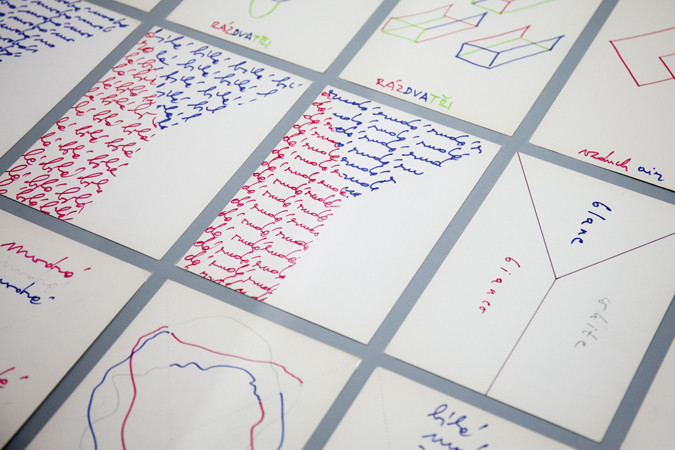 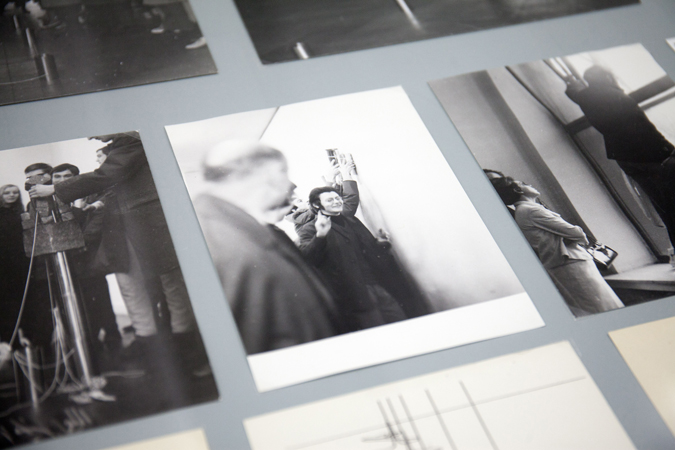 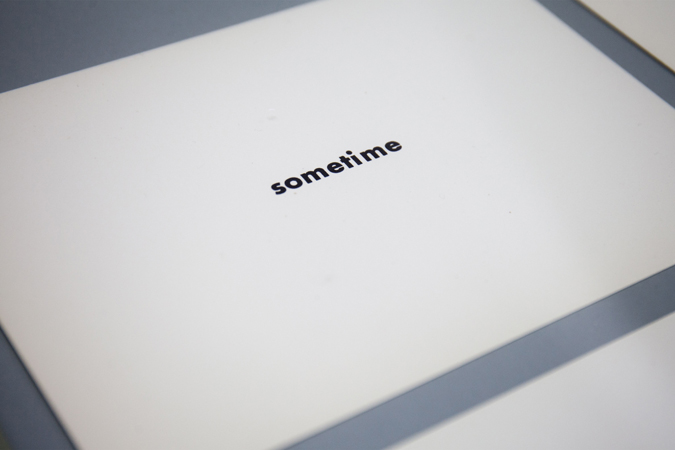 By Virtue Of… Dalibor Chatrný… was created on the basis of a request by Katherine Kastner and Camille Hunt. After several retrospective exhibitions at state-run institutions, the two gallerists decided to organize an exhibition with a more concentrated subject and breadth. And so they went looking for artists from the younger generation to present their views on the work of Dalibor Chatrný.

We remember Dalibor Chatrný as a person and an artist who was active across multiple generations without ever getting stuck in a particular time or point of view. The trust, openness, and curiosity with which he approached the world had a positive impact on those around him. Although his work is original and authentic, we appreciated above all his ability to inspire further creativity. For these reasons, we decided to explore – through his works themselves and through the people whom he met during his life – how Dalibor Chatrný’s art, views, and positions have been reflected in the environment that he inhabited. The range of people with whom Chatrný’s work is associated includes not just artists, but also musicians, writers, scientists, and more. Perhaps thanks to his lifelong teaching activities at art schools, he had a close affinity to even the youngest generations of artists. Among Chatrný’s posthumous estate, in a folder related to his teaching activities at Brno’s Secondary School of Arts and Crafts, we came across the student assignment “to make something by something” which struck us as just the thing for our project. We addressed various artists who we felt had a certain connection with Dalibor Chatrný and whom we found personally inspiring in one way or another. We asked them to, physically or for a video recording, create something by something related to Dalibor Chatrný. In fact, the idea of something resulting by virtue of something was a common theme in Chatrný’s work. As we saw it, the invited artists could present a work or action influenced by Dalibor Chatrný, using the same principles he did, or executed with him in mind. Our aim was not a traditional “homage” to this artist, but an attempt at touching on the ways in which Dalibor Chatrný lives on today. We do not take a negative view of artists influencing one another; we are not interested in determining originality, in deciding who was first, as is often done in art. We are interested in a mix of encounters, connections, ideas, happenstance. Quantum theory has confirmed the popular claim that each breath we take contains at least one atom breathed out by Albert Einstein or Marilyn Monroe – and also by Dalibor Chatrný.

Our original idea of positive imitation or emulation – as with Petr Veselý’s early works, which Veselý shares in his video – was eventually expanded to include no less important examples of artists defining themselves vis-à-vis Chatrný’s authority. His daughter Dana Chatrná describes a typical example of this relationship when she speaks of her fear of “turning into my old man” and the attempt to break free from her father’s influence. Nevertheless, in her video she shows the curtain designs from a competition for the Janáček Theatre that she worked on with her father as a six-year-old. This was a period when Chatrný tended towards abstraction, but he nevertheless entered a competition that called for a figurative solution. And so he gave his abstract sketches to his daughter, who added color and tried to find concrete forms within them. Artist, sociologist and teacher Blahoslav Rozbořil, who was one Dalibor Chatrný’s students at the Secondary School of Arts and Crafts, illustrates his relationship to his old teacher through a group photograph with his classmates in the school’s studio – on which, paradoxically, Chatrný is missing. On camera, he and Josef Daněk interpret a painting made in collaboration with Dalibor Chatrný. Although they are a generation younger than Chatrný, in the 1980s they experienced the trio of Dalibor Chatrný, Jiří Valoch and J. H. Kocman, who were something like a “think tank” of the era. Starting in the late 1960s, this trio followed nearly all activities in the area of culture and complemented each other’s viewpoints and abilities. Most young artists in Brno thus saw them as an important audience and as critics capable of engaging in a comparative assessment of their work and placing it within a certain context. This was important especially in view of the isolated nature of contemporary art in Czechoslovakia at the time. Another sign of the times is the secondary role of women in conceptual art. Nevertheless, this trio is joined by Valoch’s partner, the translator, art historian and curator Gerta Pospíšilová (1918–1994, the director of Brno’s House of Arts in 1970–1975), and by Marie Kratochvílová, a professional photographer who documented the actions and works of many Brno artists, among them Dalibor Chatrný. In her video interview, she describes not only their work together, but also her own work, which she says is directly related to her collaborative projects. Desider Tóth’s video contribution is a presentation of the linguistic works he realized in response to our invitation. Among other things, he notices that Dalibor Chatrný’s name and surname, printed one above the other on the catalogue, spell out the place of his birth. Of his contribution, he says that it is not art but something more. He also discusses the Brno conceptualists’ relationship to their counterparts in Bratislava. In his view, the work of Dalibor Chatrný is characterized by a playfulness resembling gallery educational programs, but also by mistakes and by things left unsaid – which differentiate it from such programs. For his part, Vladimír Kokolia speaks of the good fortune that Chatrný had with his work, which he compares to cutting tree trunks lengthwise on a circular saw: If you try too hard, it won’t work. In the article Dalibor Chatrný published in Art+Antiques in March 2015, Kokolia wrote: “This is a personal note. I am selfishly writing about myself, about that part of me that I call Dalibor.” This observation had a fundamental influence on our project’s final contours. In his interview, Kokolia confides that, it there was anyone in Brno with whom he would have liked be in a group, then it surely was Dalibor Chatrný – and this despite the fact their relationship was essentially antithetical. For instance, Kokolia does not identify with Chatrný’s trust in artistic experimentation. In 1992, upon a recommendation from Chatrný, Kokolia took over Chatrný’s position as head of the Studio of Experimental Printmaking at Prague’s Academy of Arts, which is now called the Printmaking Studio II / Vladimír Kokolia School. During his studies, Pavel Korbička was inspired by the two-handed drawings Chatrný executed along the axis of his body. In fact, these works led to Korbička’s long-term artistic collaboration with professional dancers. In his video contribution, Korbička discusses this work and his exhibitions and encounters with Dalibor Chatrný. Musicologist Jiří Zahrádka, who spent much time with Dalibor Chatrný during his final years, describes how he sees art – and often the world around him – through the eyes of Dalibor Chatrný. In his video documentary, he presents his family’s seasonal greeting card, which he produces and distributes every year on the basis of Chatrný’s “recipes,” with no ambition of making art.  Jaroslav Šťastný (aka Peter Graham), a student of Alois Piňos, works with music – another area of interdisciplinary overlap in Dalibor Chatrný’s career. We recorded his performance of Peter Graham’s composition DCH. Requiem for Dalibor Chatrný.

The range of possible artistic contributions or reflections on the theme of Dalibor Chatrný may grow further. One inspiration is our project’s possible continuation at Brno’s House of Arts in 2017.

Although we originally envisioned an exhibition about Dalibor Chatrný without the physical presence of his works, in the end we agreed to provide a certain overview (partially because of the gallery’s exhibition concept). The original loose leaf publications that Chatrný presented to his friends and acquaintances in person or sent via mail correspond to our area of interest. Chatrný allegedly called them “cookbooks” – i.e., something that can be followed or innovated upon. They let us see, in a relatively small space, the full breadth of issues that Dalibor Chatrný explored in his work. They also show that he did not require grand formal solutions for his work. And last but not least, they are an interesting medium, one typical for the era in which they were made and for the context in which Chatrný spent most of his active life. During the 1970s and ’80s, Dalibor Chatrný exhibited only sporadically, and so these self-published works also served to present his latest works to a larger circle of people. The publications’ universal format and graphic design were also used by others within Chatrný’s artistic circle. These limited-edition publications were printed at the Secondary School of Arts and Crafts by Chatrný’s brother Ivan, whose own publications are exhibited along with those by other friends (Jiří Valoch, Ladislav Novák). Valoch quite possibly influenced the typography used in these publications. In fact, it was probably Valoch who initiated the use of lowercase instead of capital letters among Brno’s conceptualist artists. Many of the publications are accompanied by his theoretical writing, sometimes also by visual poetry. Since they were intended for personal distribution, their current presentation at a public exhibition is a kind of paradox. In past retrospectives of the work of Dalibor Chatrný, they were more commonly exhibited as supplemental material (in digitized form), but for us they are central to his work and so we have decided to give them as much space as possible. Inspired by these printed works and using the same technology and same graphic design, we put together a new edition (200 copies) that we distributed by mail with the aim of encouraging their recipients to create something by something related to Dalibor Chatrný. The submitted works will be used for our further research.