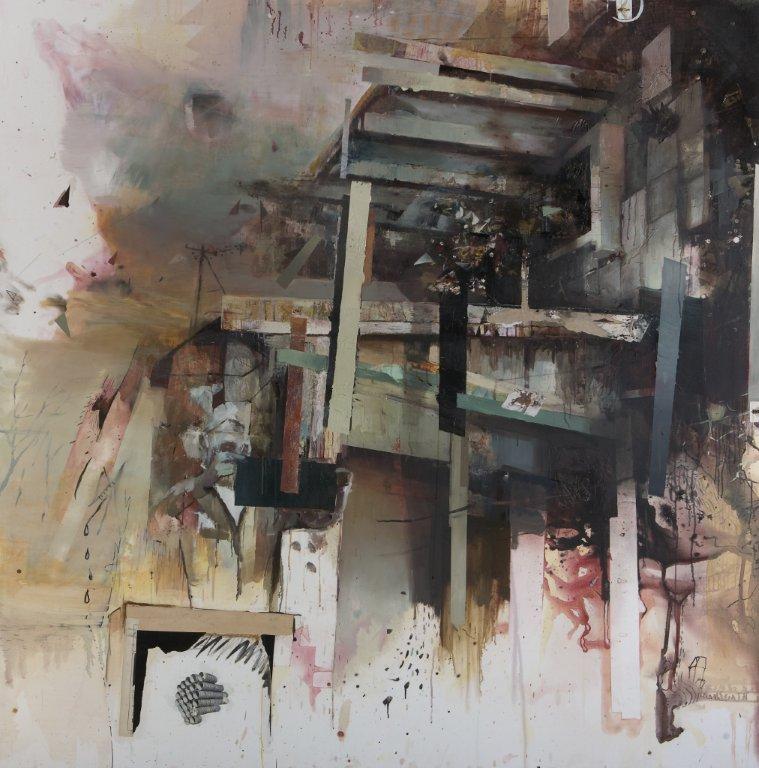 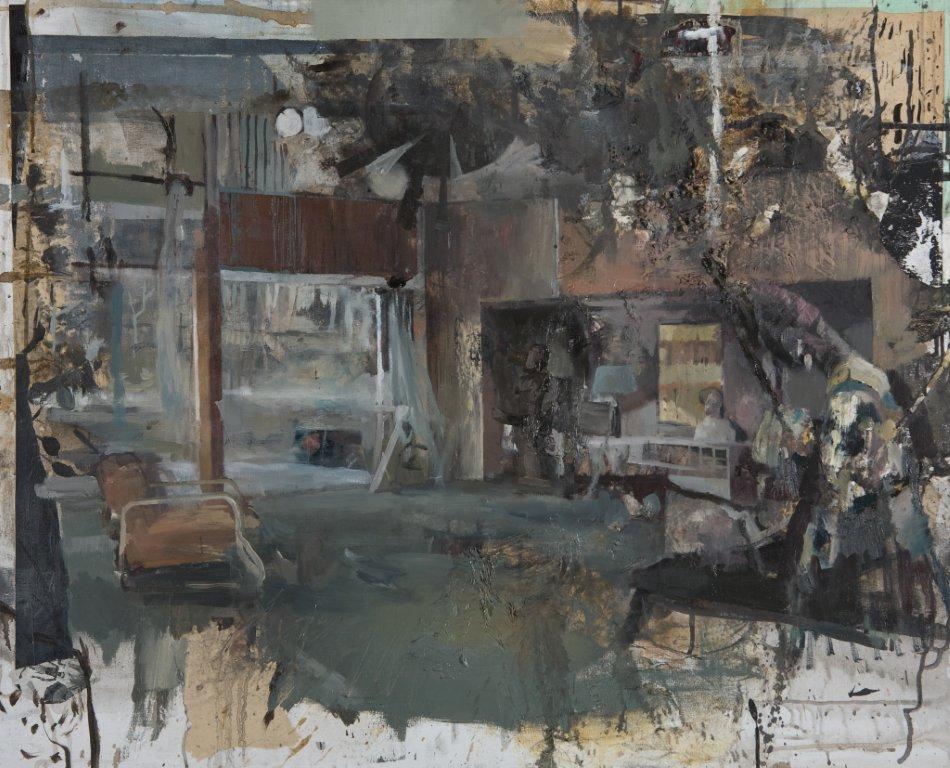 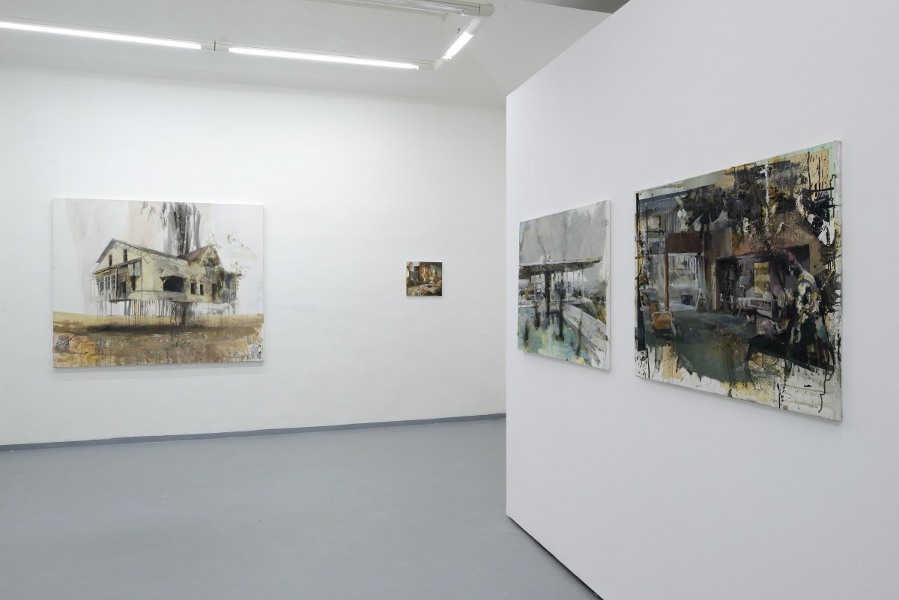 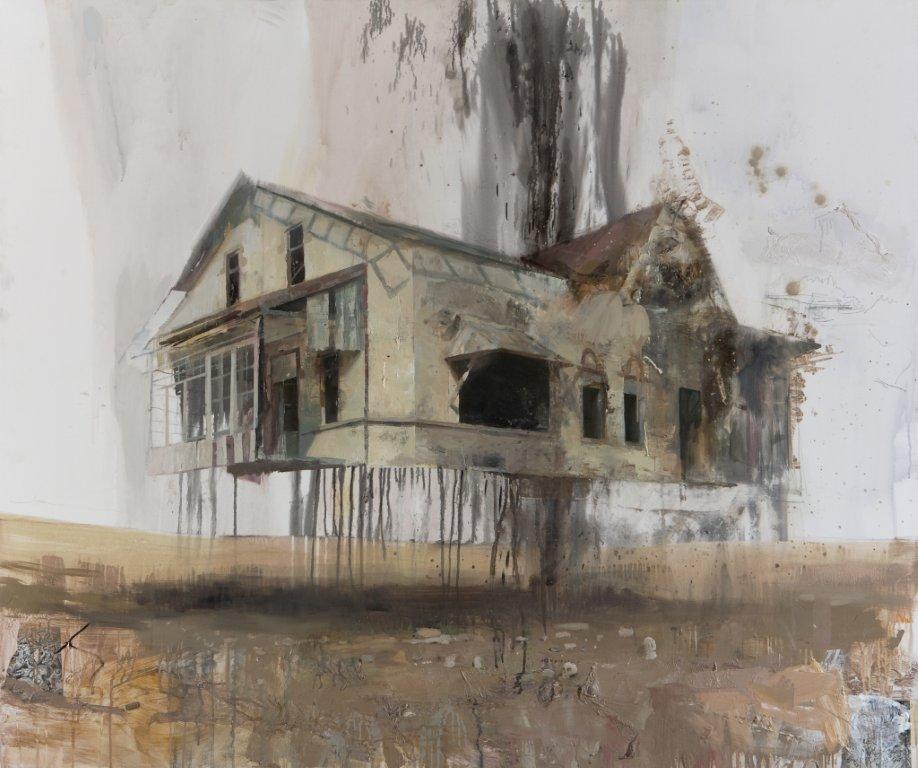 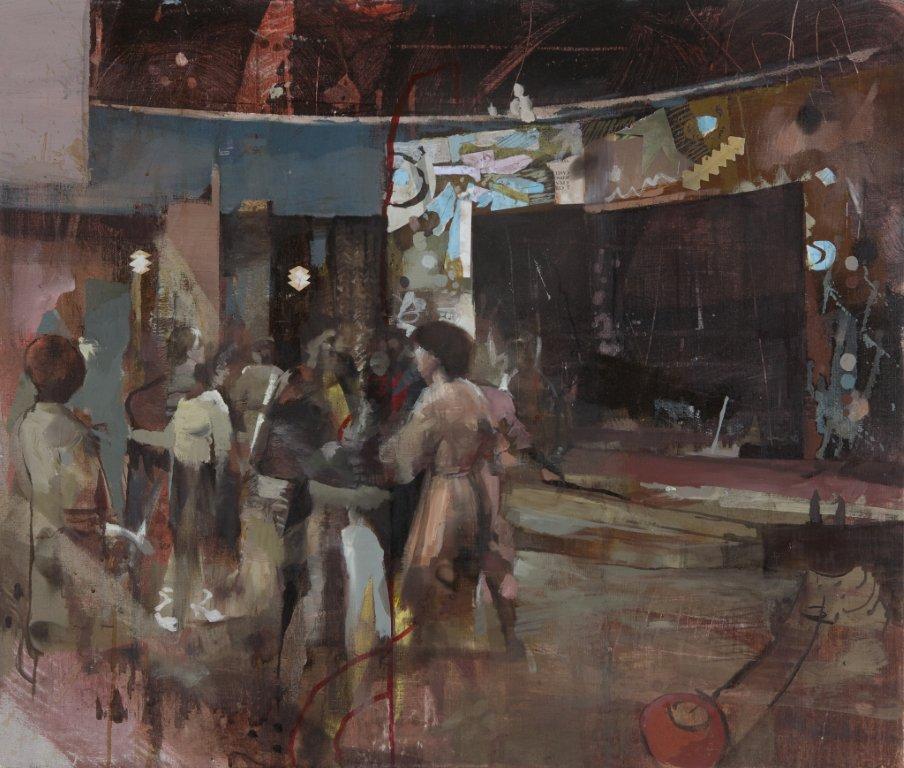 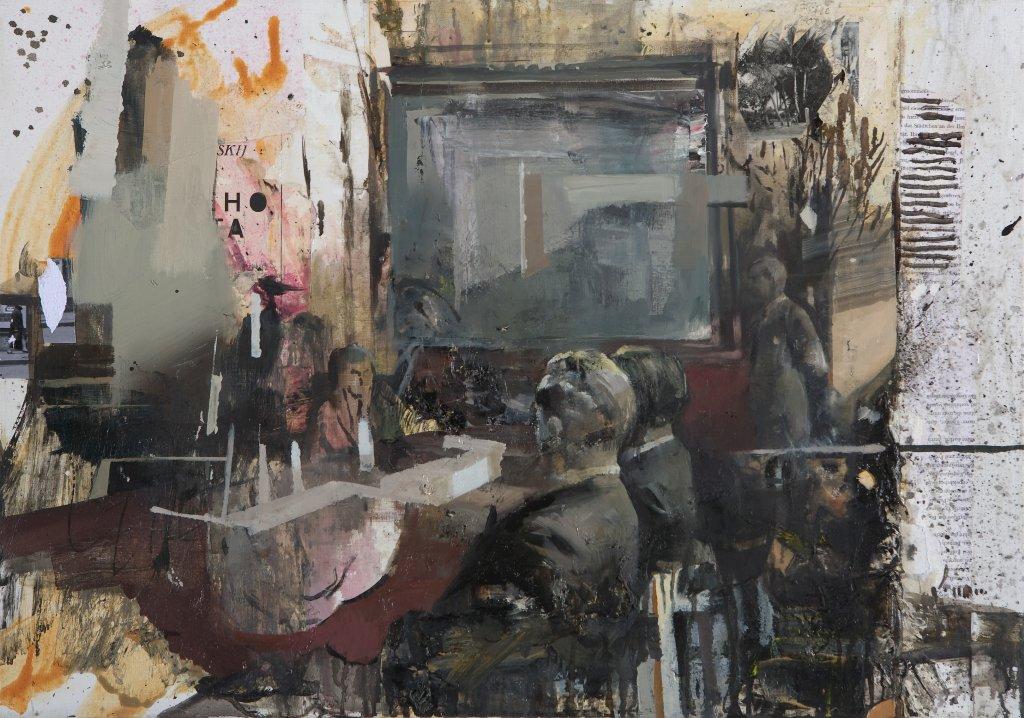 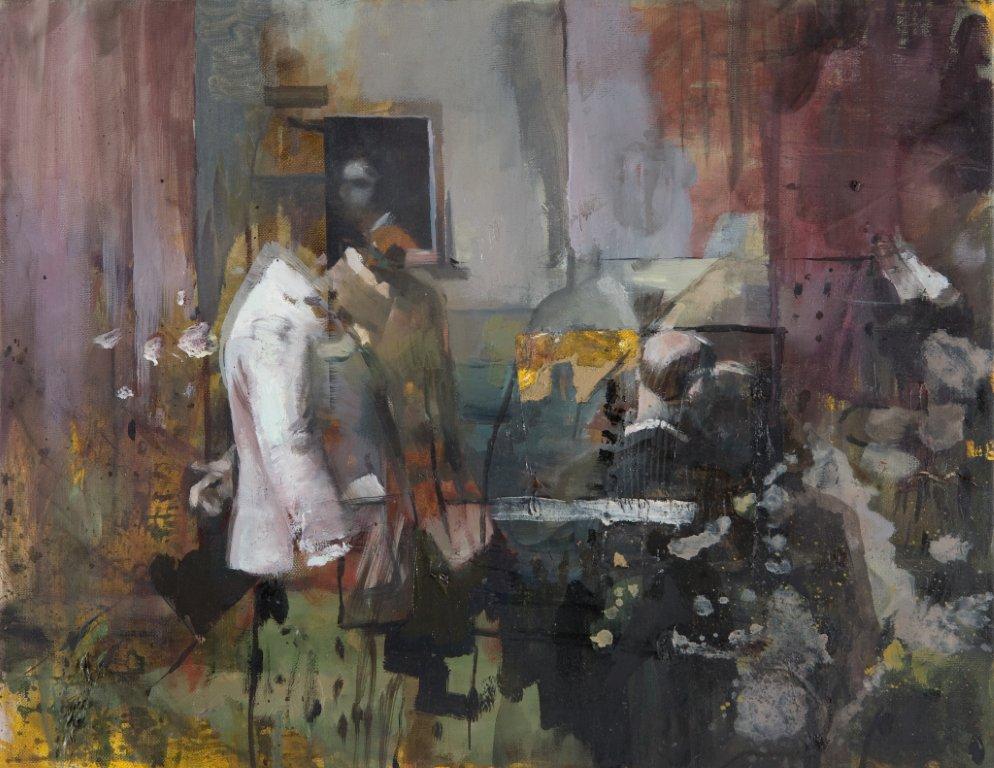 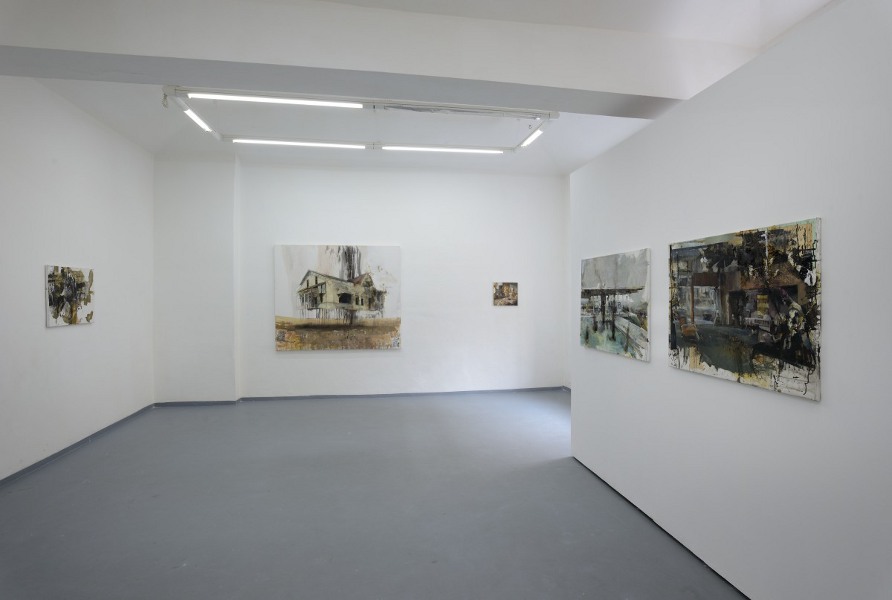 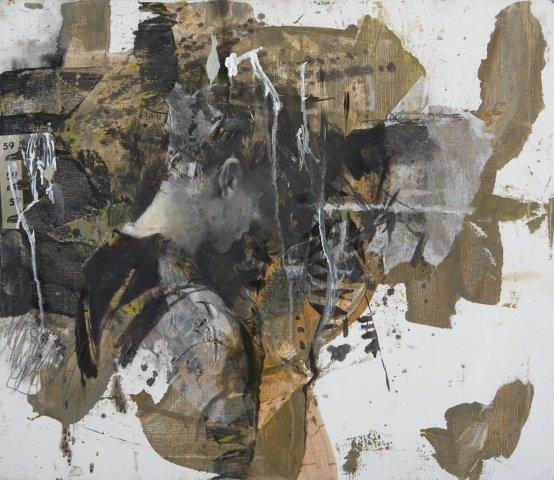 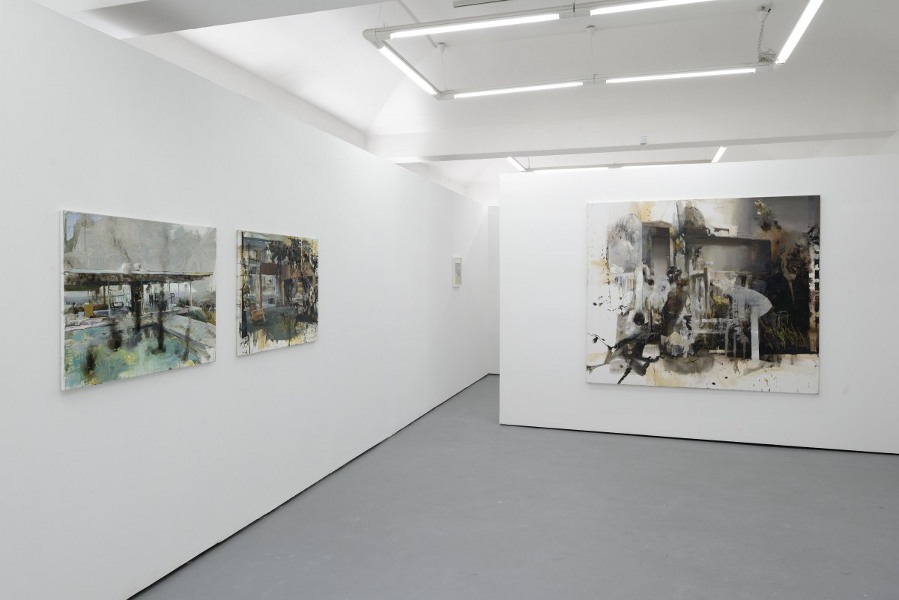 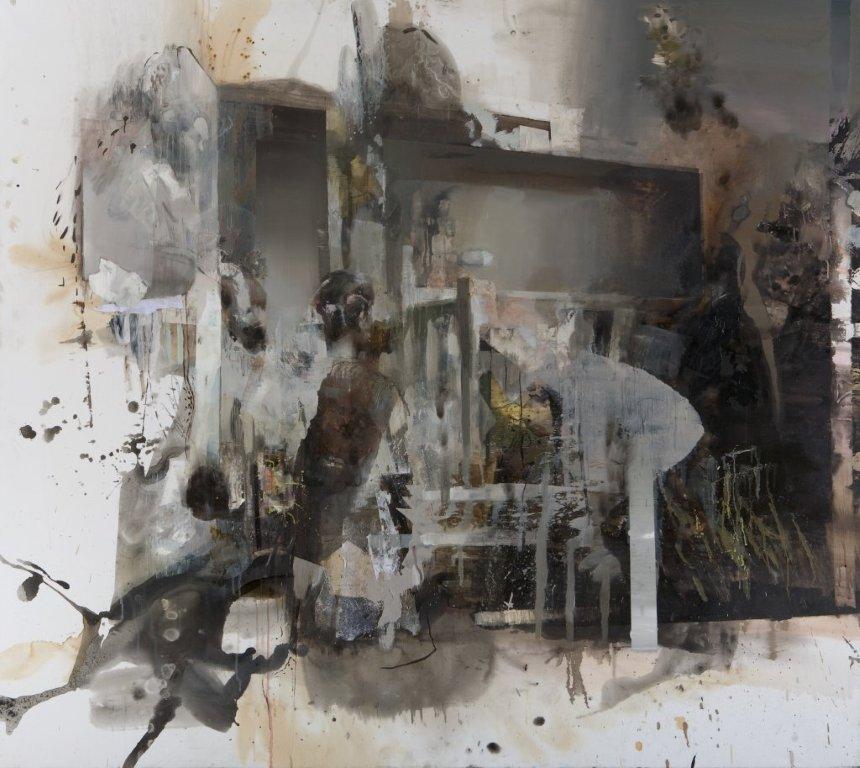 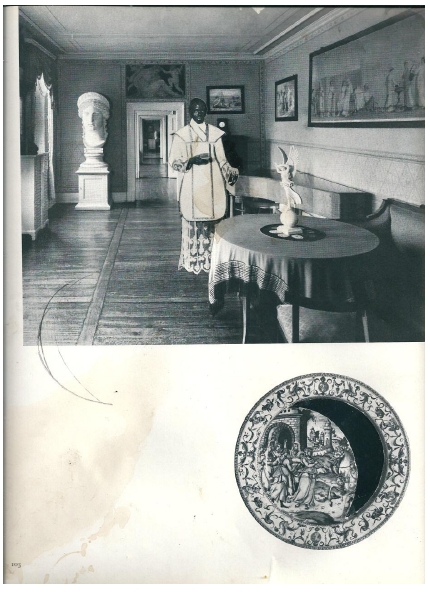 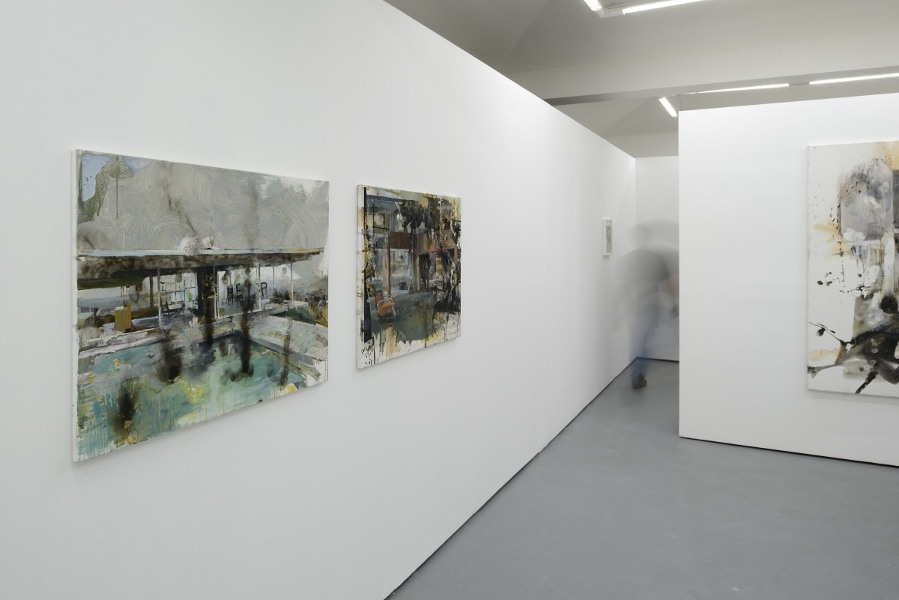 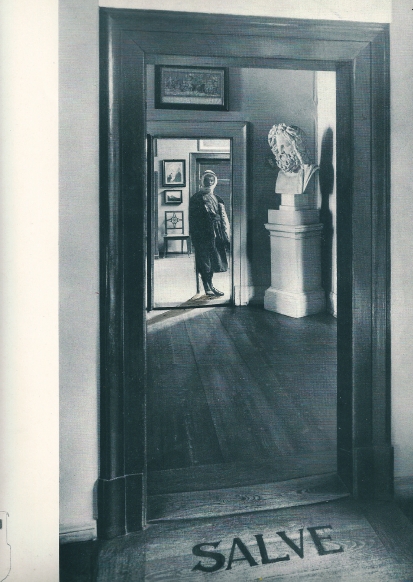 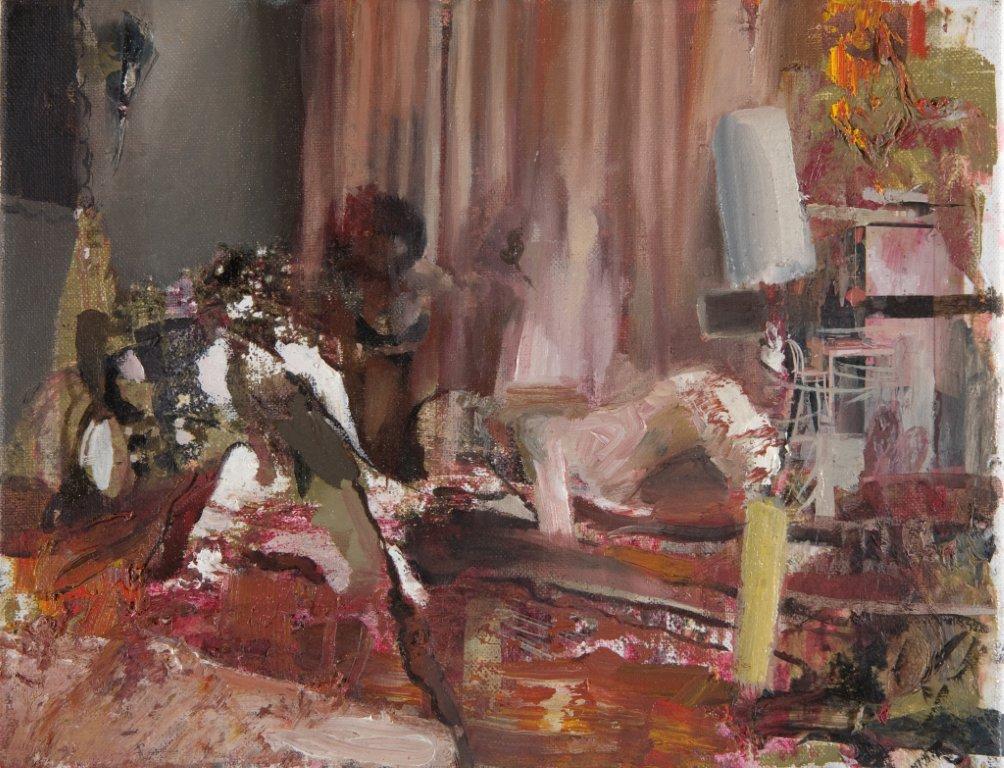 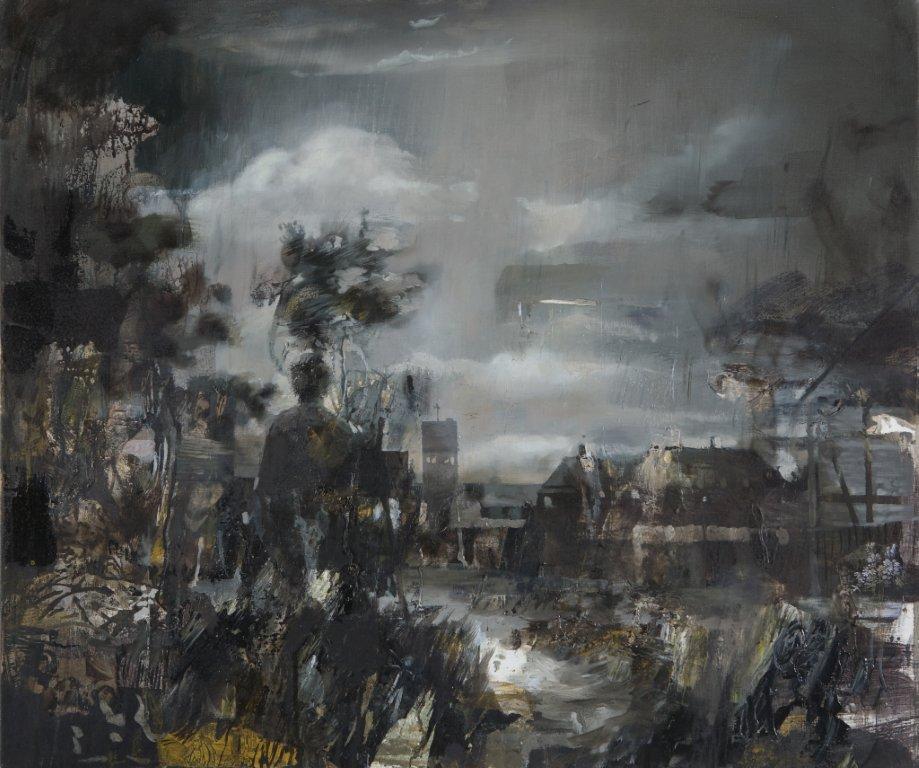 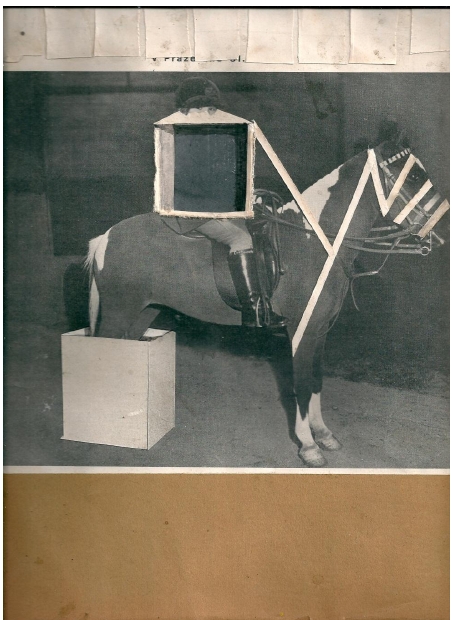 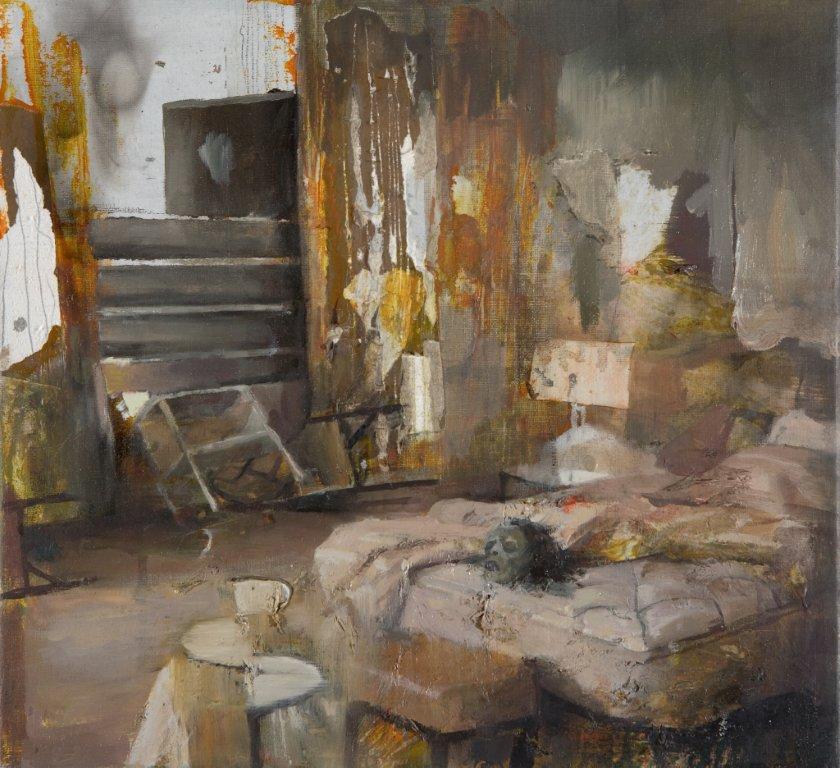 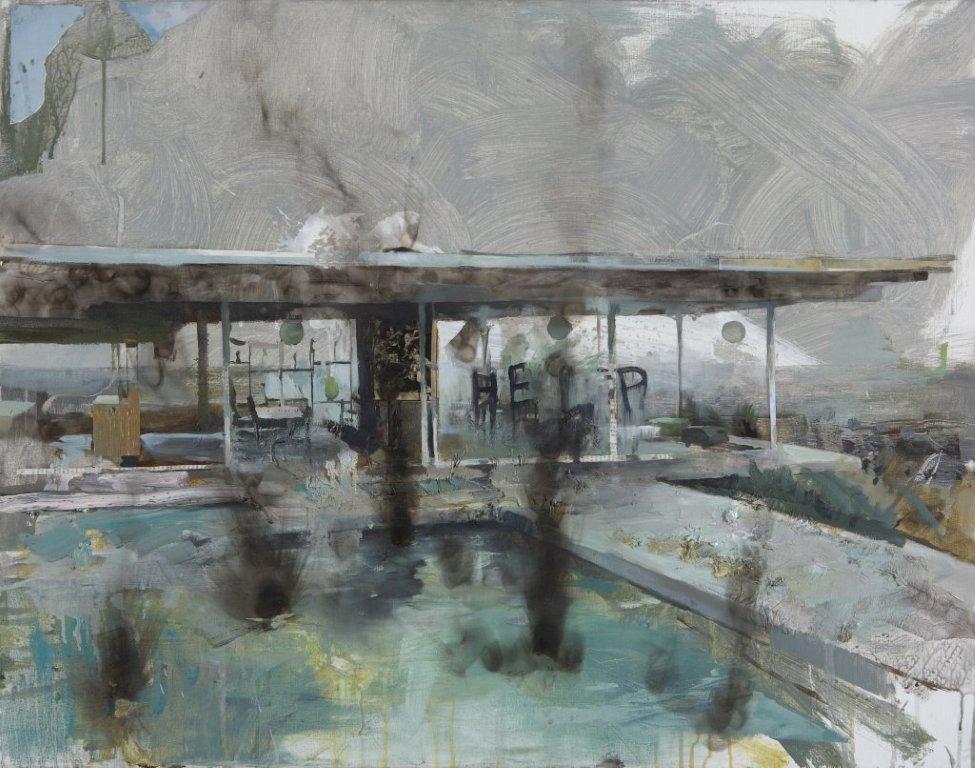 „A long wall blocks the view from the street of almost the full length of the gallery. On it, a relatively inconspicuous black and white abstract painting, in graduating shades of grey,  creates a parallel between the gallery space and the exhibition hidden within.  A series of wall panels create an entrance hall leading into two connecting rooms, resulting in a disruption of the gallery’s usual traffic  flow.  The directness of the German word Kunstwerke , which is the title of the exhibition, resonates in the works of art.  The word acts as a reference point for the historical and aesthetic themes that can be found in the exhibited paintings, collages and video animation. The title also refers to Daniel Pitín’s thinking about, and approach to, the significance of painting exhibitions within the current objectives and praxis of contemporary art.

The exhibition refers  to historical events,  developed more generally as social or personal traumas, as well as being a (somewhat self-ironic) reflection of the artists‘  own position within the art market system.  And while Pitín is at ease with this position, he also presents a troubling picture.  One of the themes of the exhibition is the art collecting phenomenon  derived from the shared experience of classical modernism, which placed  art in our living spaces –  forming enduring tastes and societal values. In these works of art (Kunstwerke) Daniel Pitín develops historical moments and memories of an unspecified social consciousness by which he addresses various manifestations of power in the ideological and aesthetic canons of western civilization.  The subjects depicted  are sometimes presented as cliches, such as a Bauhaus building (in the animated video) inhabited by indigineous tribes which slowly disappears in a desert storm; or a photo-collage of an oriental  figure set in a Weimar interior. Daniel Pitin’s paintings, where, for example,  aboriginal art  is present and remains in the abandoned art collector‘s modernist villa, act as a counterpoint to this cultural assimilation. The paintings develop along uncertain themes built on the remnants of European colonialism, using abstract as well as photorealistic imagery with, for example, scenes from the Nazi era.

The inspiration for the many of the paintings comes from film scenes, which portray meetings and events that are part of a commonly shared visual experience. The subject is their decomposition within the framework of the static image. On a second, more formal, level there  is the experience with instability, and the disappearance of the fingerprint of reality on the film or photographic record.  Daniel Pitín‘s painting undergoes transformations comparable to the gradual disintegration and decomposition of photorealistic images through emulsion, which, in the final stages, become abstract through reduction. Along with photography, film acts as a technical, but also a cultural, reference for the paintings. The use of collage (in video and photography) is a schematic and often absurd collision of two formal and cultural layers –  masks and background. The paintings, despite the layering of colors and materials and the occasional subliminal appointment of fragments from other illustrative materials, are more the actual background.  The mask, typical in collage, has replaced the sketched motifs and their expansion or retraction within the format of the picture. The form of the paintings, their abstract fragmentation or scenic illustration, is part of the creative process and an attempt to take a step back from the deeply rooted themes and towards a study of film and photography through the medium of painting.

The artworks in the exhibition are arranged in reference to a museum, into formal and thematic cycles – video as instruction, collages as graphic shortcuts and a gallery of paintings as a response to levels of meaning.  The retelling of events in the works of Daniel Pitín reflects the conflict that is bound to set the value frameworks but the current reflection and questioning is not their condemnation. “(Curated by Martin Mazanec, June 2012)

Born 1977 in Prague, Daniel Pitin studied at the Academy of Fine Arts in Prague from 1994-2001 in the classical painting studio under Professor Zdeněk Beran and the Conceptual Media studio under Professor Miloš Šejn. During his studies at the Academy, he twice received the prize for the best work of the year, was the recipient of the Henkel Art Award for artists from Central and Eastern Europe in 2004, and was awarded the Mattoni Prize for the best new artist work at the 2007 Prague Biennale. Daniel exhibits regularly in Europe and the United States, and in addition to his solo exhibition at hunt kastner, will also have work in upcoming collective exhibitions this year at: The Temple Bar Gallery in Dublin (Making Familiar: 09/08/2012 – 29/09/2012); MCA Denver; and MODEM Centre for Modern and Contemporary Arts in Debrecen, Hungary.