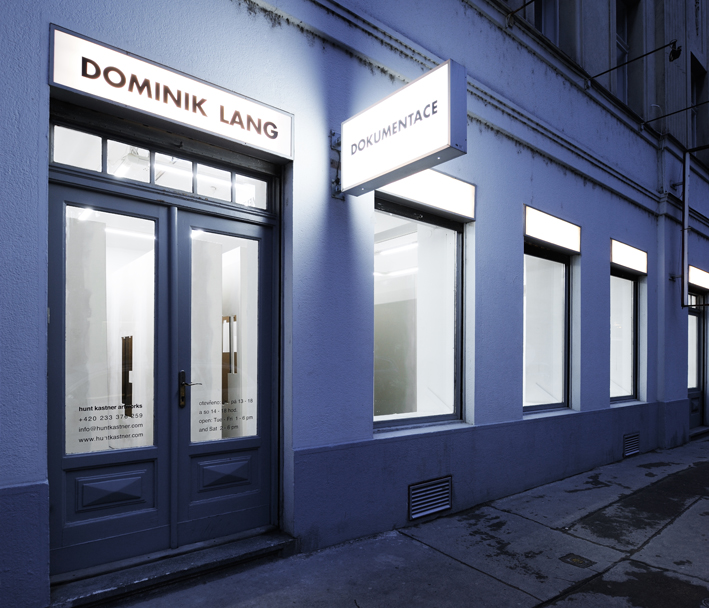 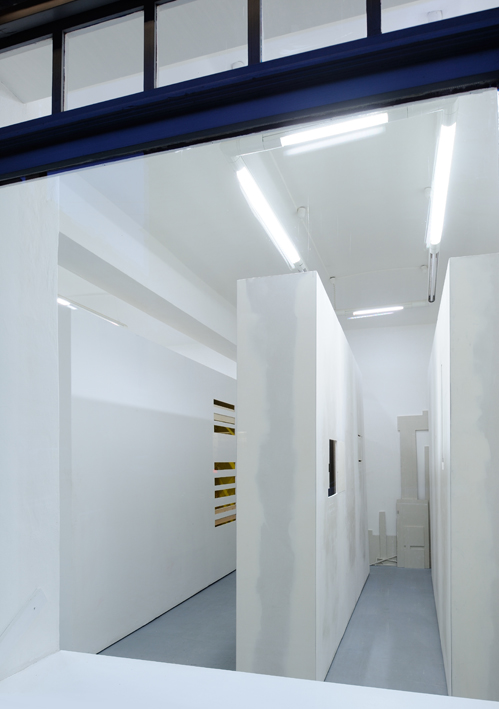 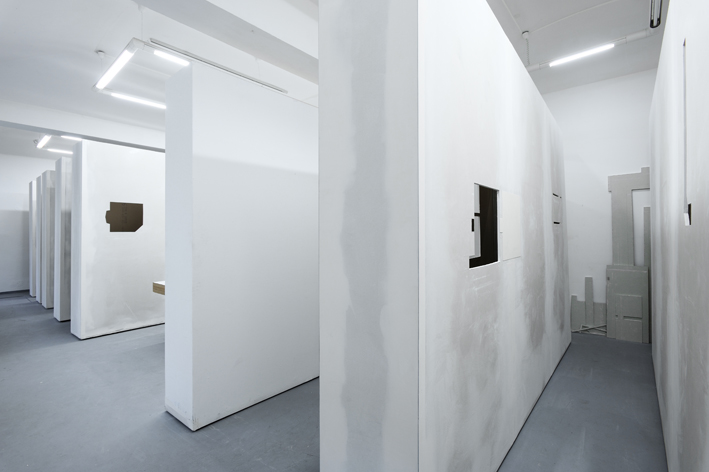 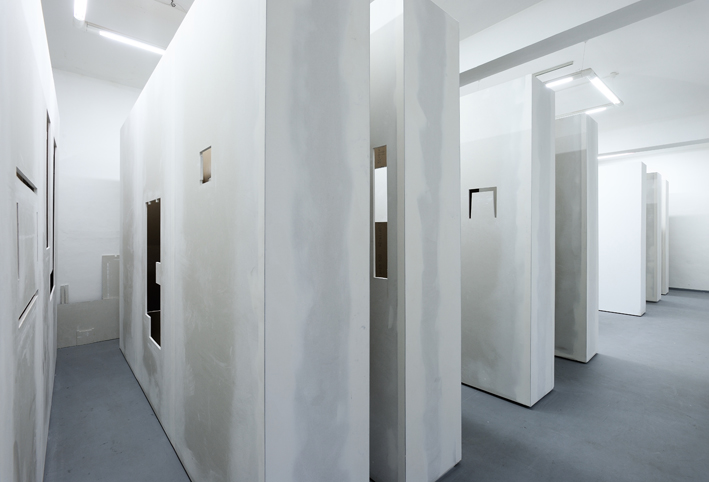 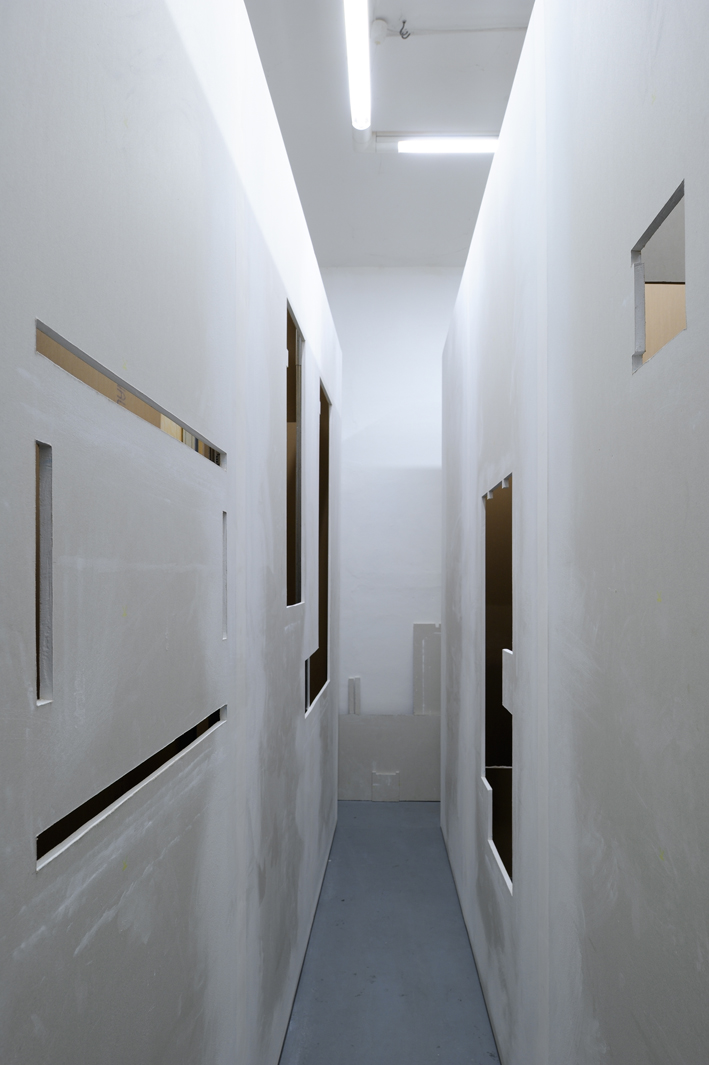 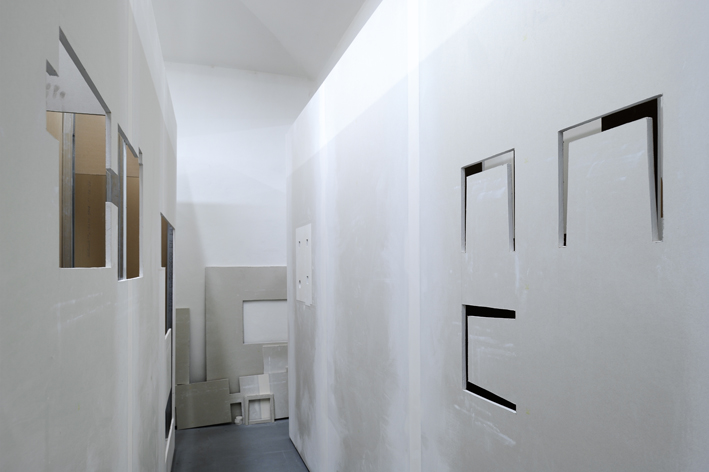 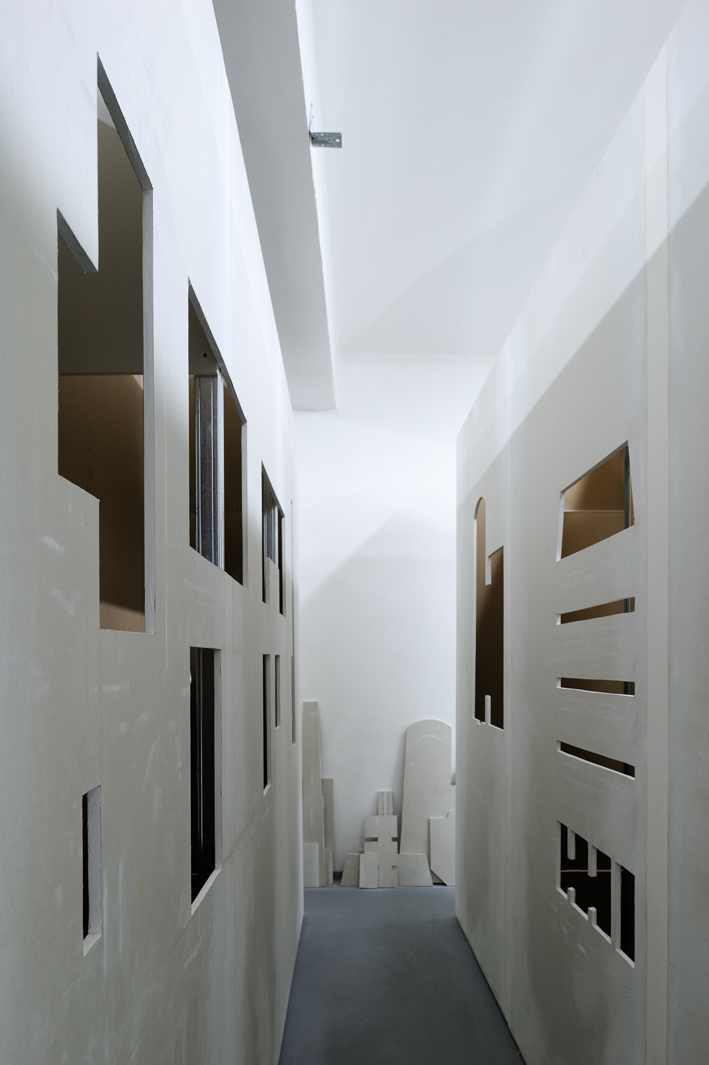 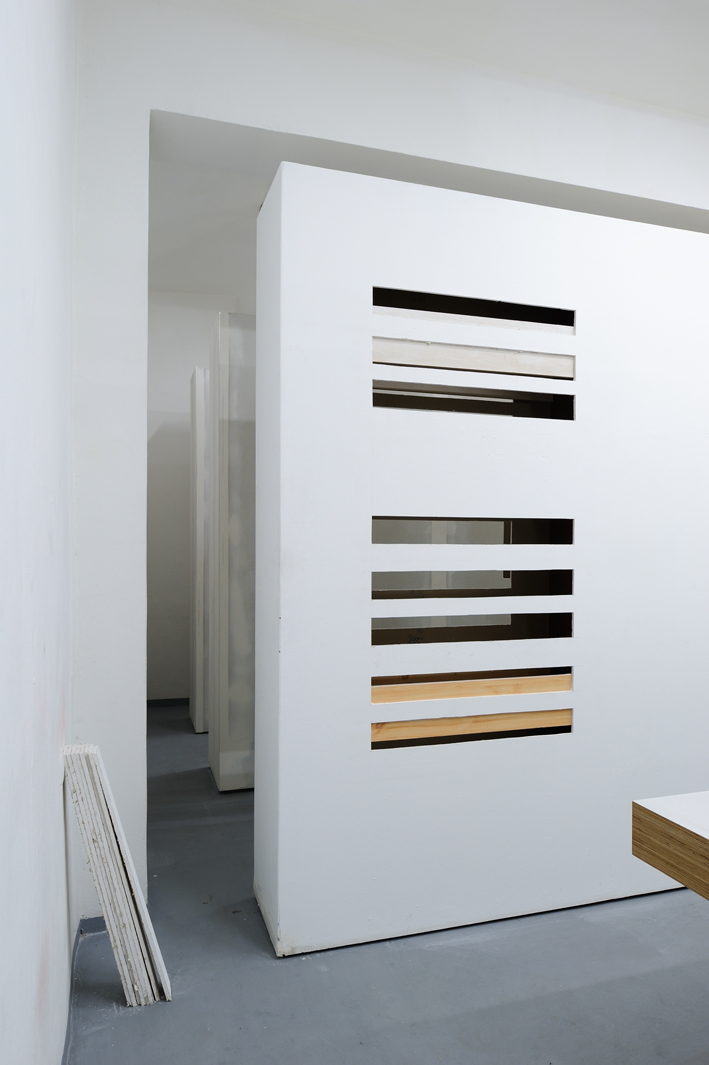 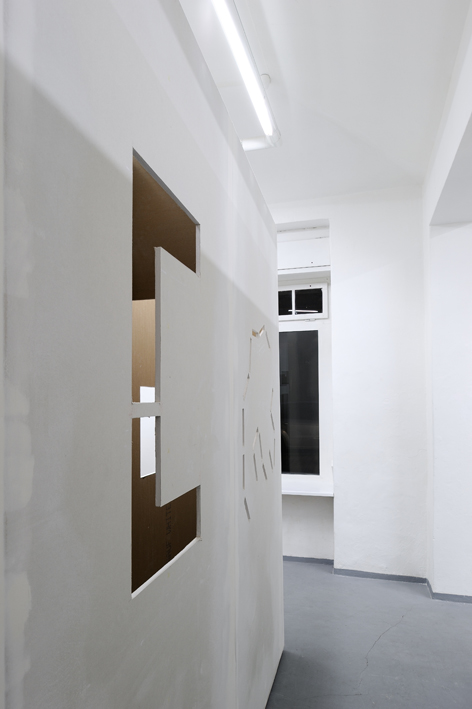 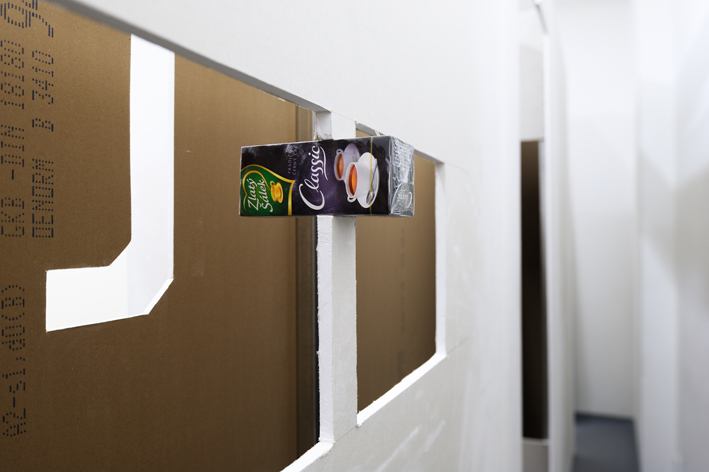 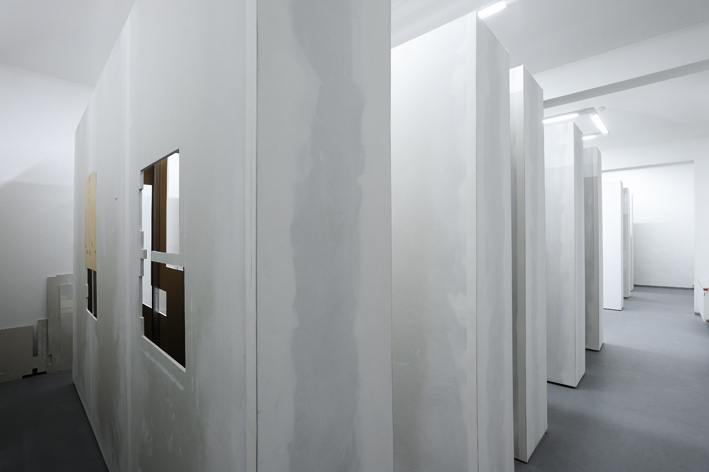 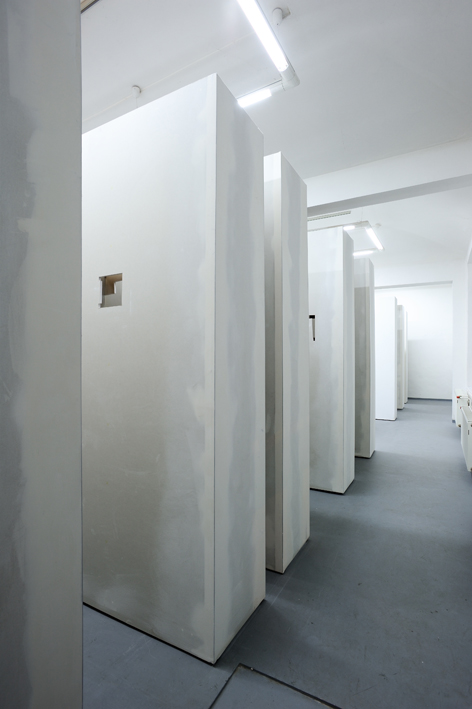 hunt kastner is pleased to present Documentation, a new solo project by Dominik Lang that was created specifically for the hunt kastner gallery space in Prague.

Documentation is type of returning, a returning to the past and to a space whose constraints are firmly anchored in the subjective perception, experiences, choices and often fleeting memory of the beholder. Dominik Lang’s current exhibition is also, in many respects, a return – a return to the gallery context as one of the basic structural elements of the exhibition, although by no means the only one.

Although an examination of the relationship between the viewer and the object, and of the object to the space, is never absent from Lang’s work, in the current exhibition it clearly occupies the central place. The eight wall panels (seven of which are replicas of the gallery’s single freestanding and mobile wall panel) are not only an exhibiting medium, but are also a method of separation, or even an insurmountable barrier – the rigid character of the panels defines our field of movement and prevents any alternate point of view. The multiplication is carried through to the extreme limit, completely filling the gallery space – eight massive wall panels, eight minimalist objects that have completely transformed, or disrupted, the original layout and use of the gallery. The way the gallery usually divides the space during the course of other exhibitions, namely into two autonomous parts with a single wall panel, has become Lang’s model and an impetus to action.

The exhibition Documentation is not only a return to, or a revival of some of Lang’s previous work, but also presents an archive, or “private collection” of various gallery floor plans and museum spaces that chart the author’s previous exhibitions, or document spaces (some are seen to have a positive influence, others a negative influence), which Lang perceives as essential.  On the one hand, the showcasing of this personal archive can be seen as another step towards the disruption of the nature and function of the gallery space – a commercial gallery becomes a platform for the presentation of a “depository” of other, potentially competitive, exhibition spaces. On the other hand, it also presents a subjective architectural solution for the small gallery space, although inhibiting, as the increasingly frustrated visitor attempts to make out what is on the tightly clustered panels.  In the end, however, the seemingly unreachable becomes reachable, the invisible, visible. As with his installation the Sleeping City at the Venice Biennale, Dominik Lang, looks again at the relationship of the past to the present, and to our ability to grasp this in all its complexity.

Dominik Lang (1980) ) studied sculpture at the Academy of Fine Arts in Prague, graduating in 2008.  As part of his studies, he spent one year at the Cooper Union in New York (2006-7), and in 2006 worked as an assistant in the studio of Ai Weiwei in Beijing.  Lang was the assistant professor in the visiting professor’s atelier at the Academy of Fine Arts in Prague from 2008-11, and currently heads up the sculpture studio of at the Academy of Applied Arts in Prague. His work has been exhibited widely and in many institutions, for example: Prague City Gallery; the Prague Biennale; Zámek Ujazdowski, Warsaw;  Trafó gallery, Budapest; Moravian Gallery in Brno; Galerija M. Kraljevice, Zagreb; and Sculpture in the Street public art project organized by the Brno House of Arts. Dominik Lang represented the Czech Republic at the 54th Venice Biennale in 2011 with his installation Sleeping City / Spící město. In April of this year, part of this installation will be presented at La Triennale, curated by Okwiu Enwezor, in the new opened Palais de Tokyo in Paris.  hunt kastner will also be presenting a new solo project by Lang in Basel in June, at the prestigous platform Art Statements | Art 43 Basel, and a profile of the artist will be published in the June issue of Frieze magazine.  Lang’s work can also currently be seen in Pague at the exhibition Islands of Resistance, Between the First and Second Modernity 1985-2012, curated by Edita Jeřabková, Jiří Ševčik and Jana Ševčiková, at the National Gallery in Prague.