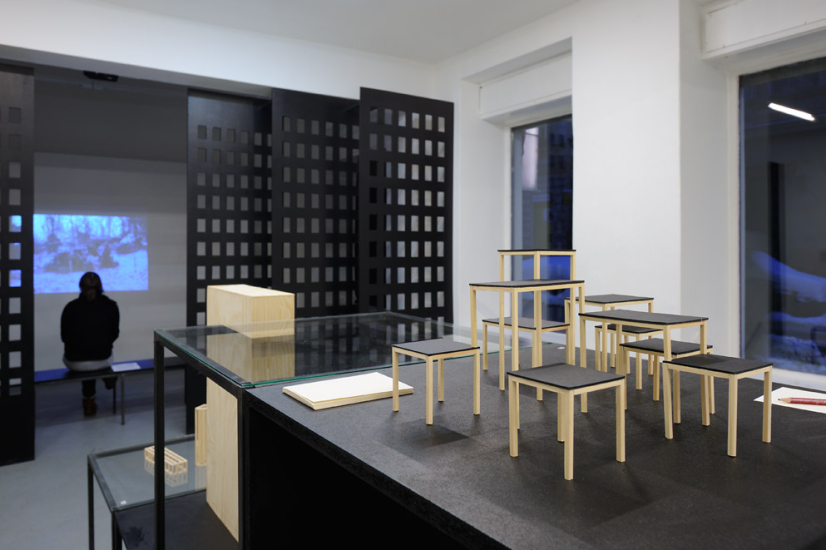 Model No. 6_Tables for drawing, writing, reading and sitting 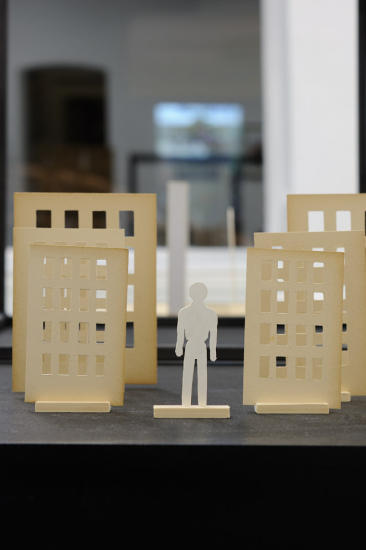 Model No. 11_A persons movements are narrowly defined 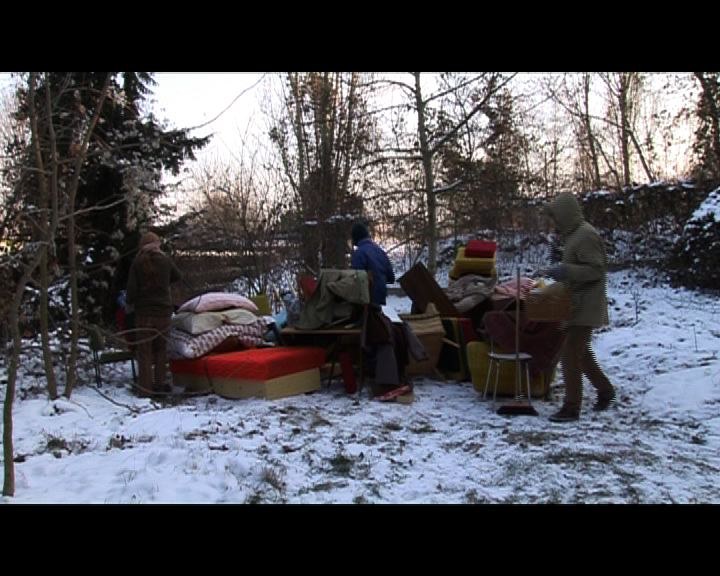 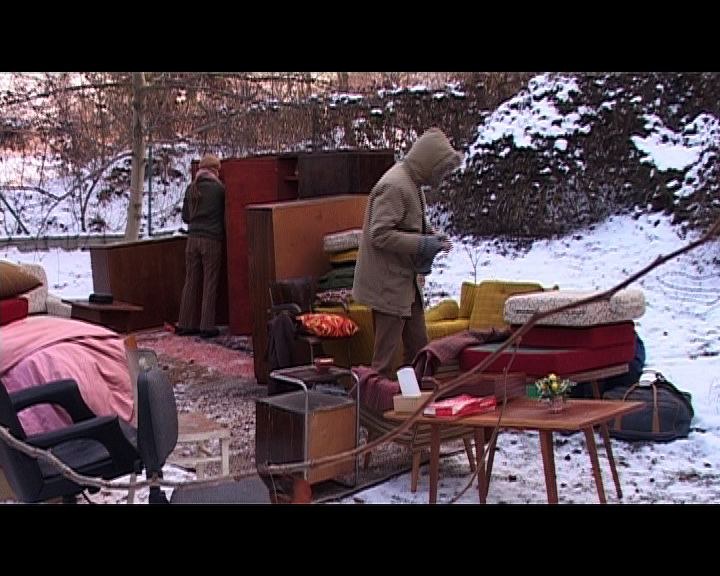 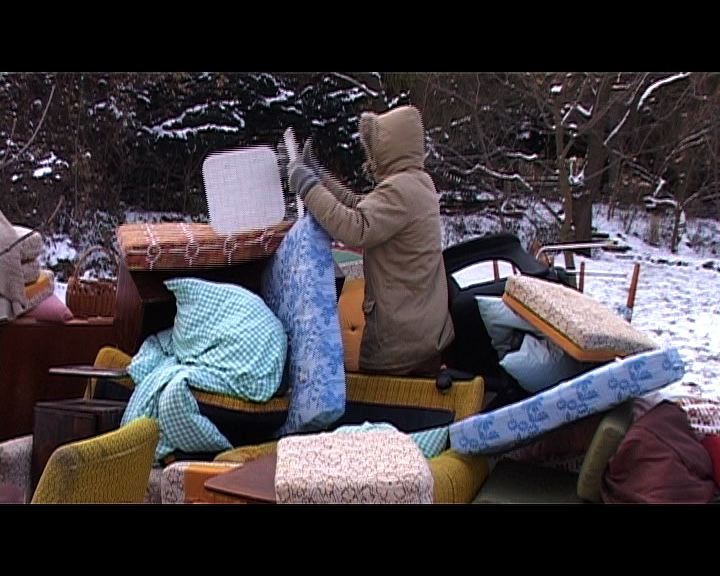 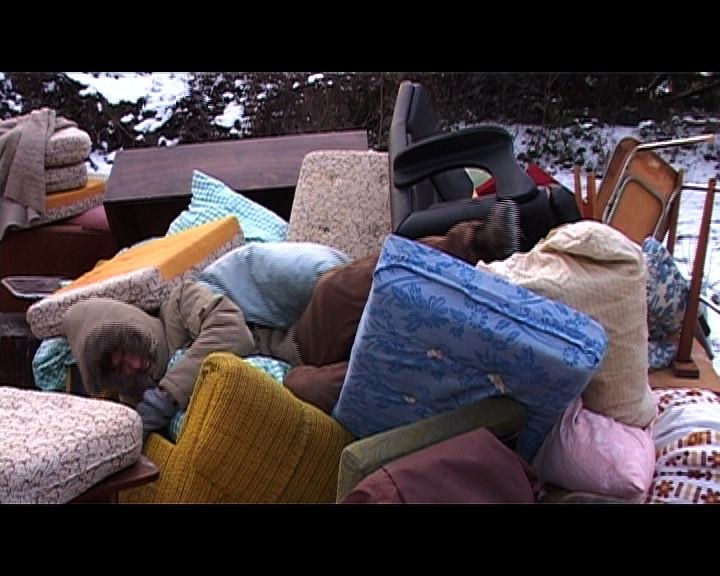 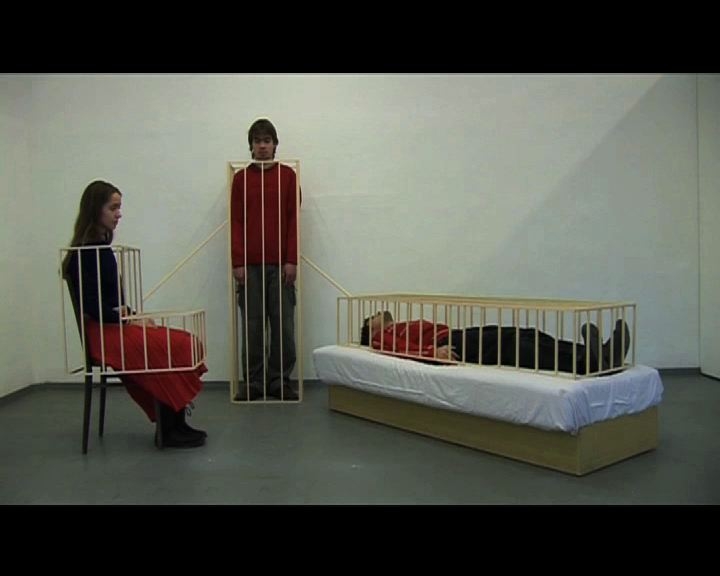 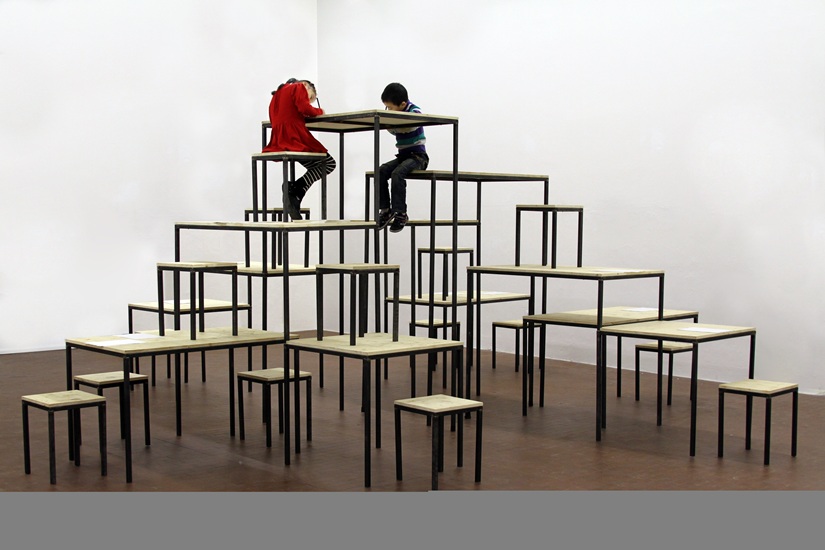 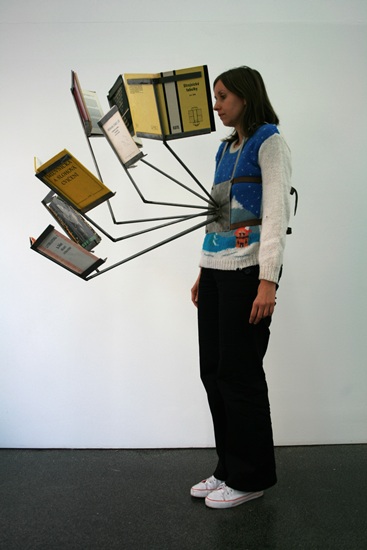 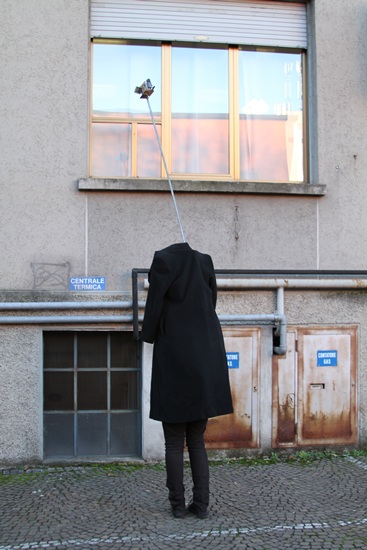 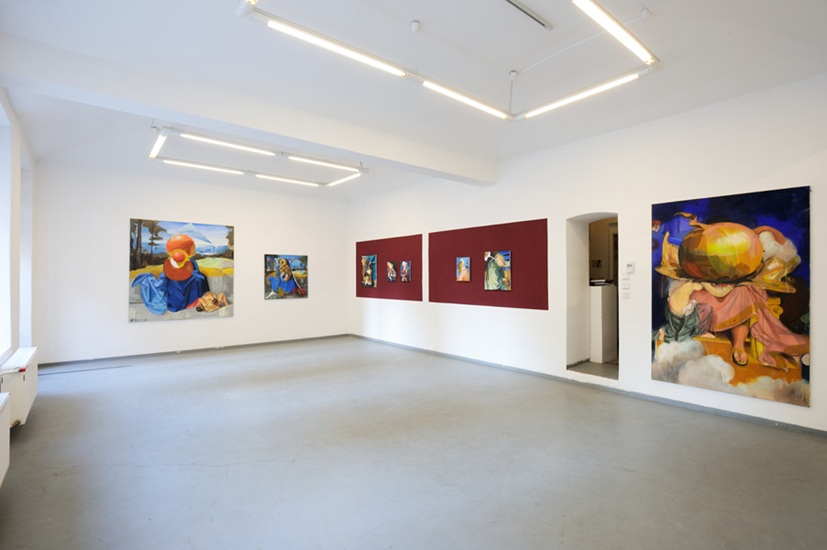 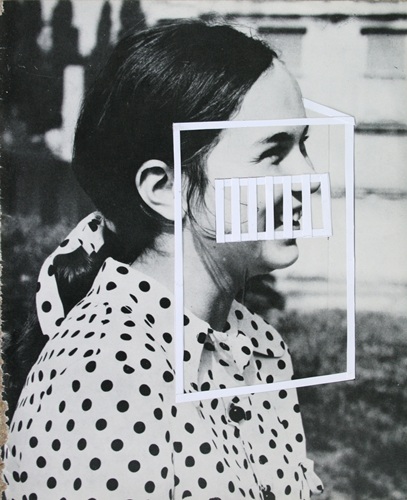 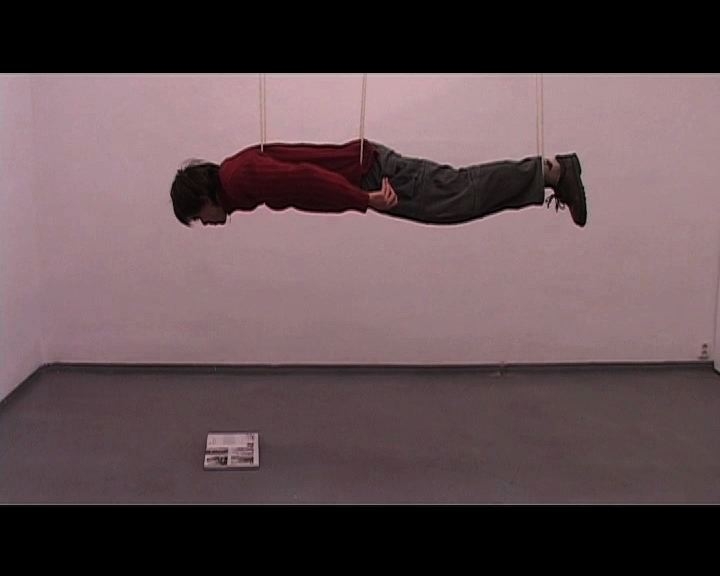 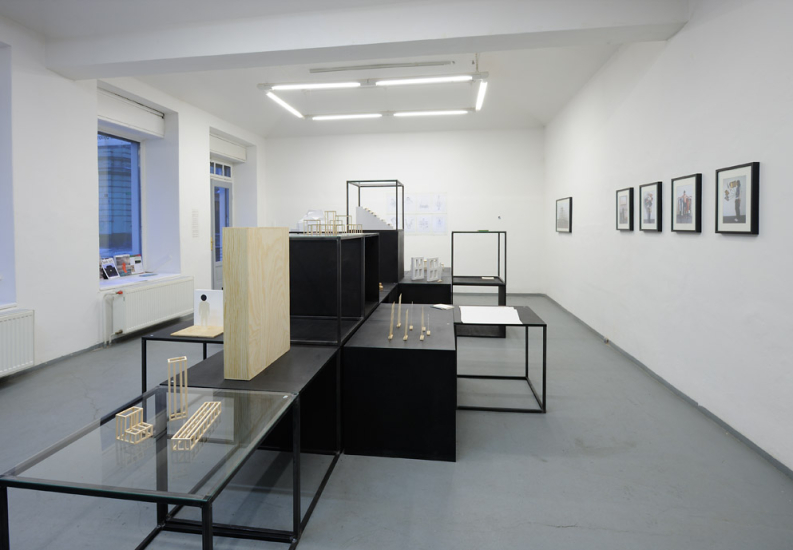 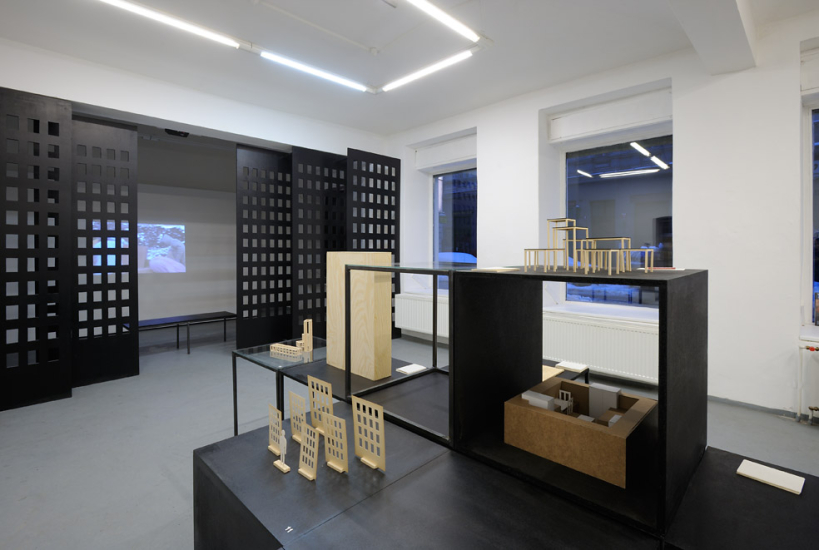 installation of 24 tables a 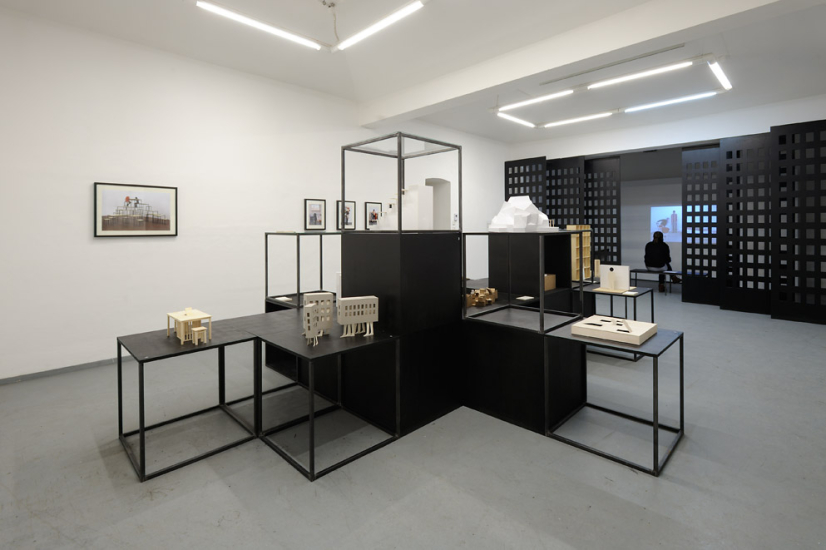 Installation of 24 tables b 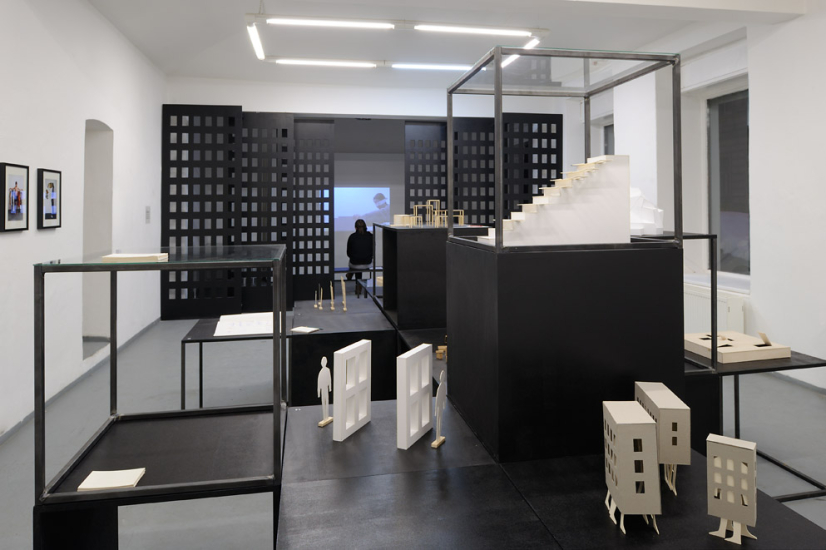 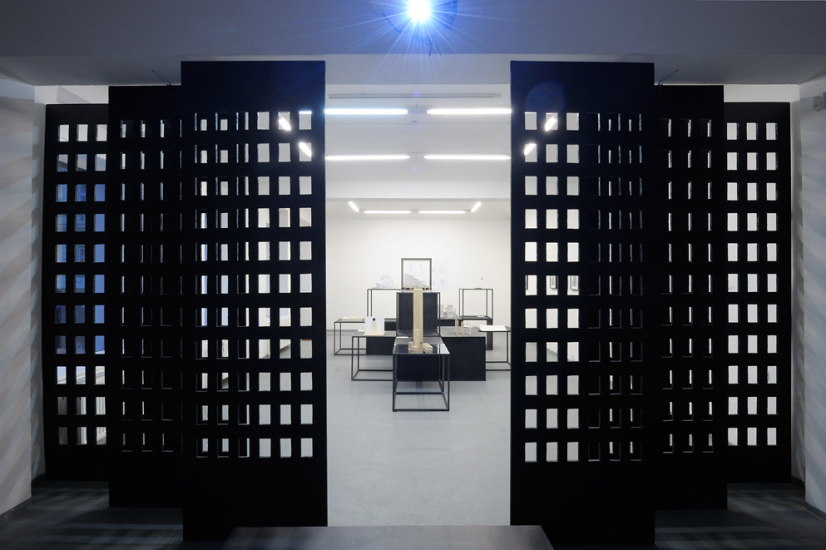 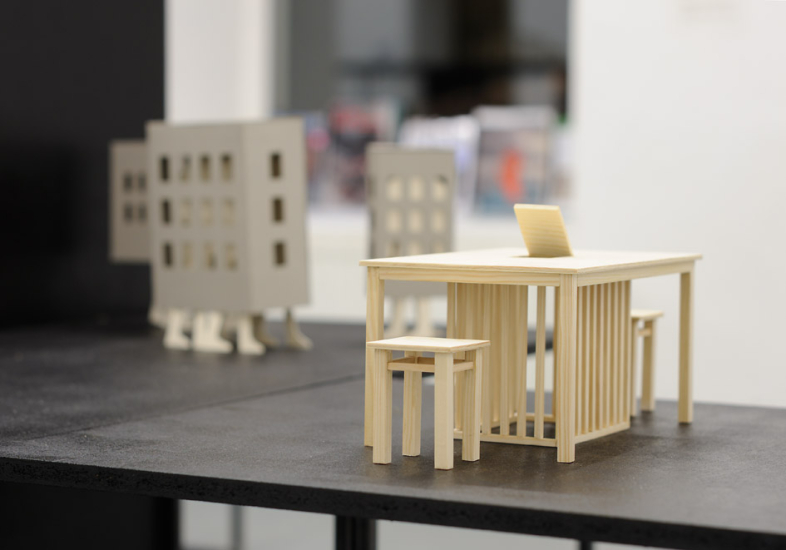 Model No 1_ There is a cage under the dining table, where one family member after the other is enclosed during mealtimes 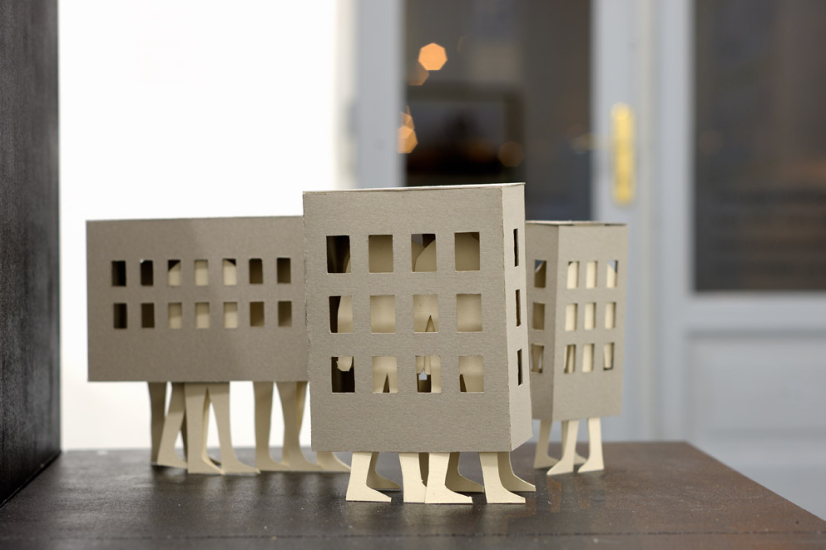 Model No 2_ People build structures in the shape of the homes where they live, that can be worn and carried on their bodies 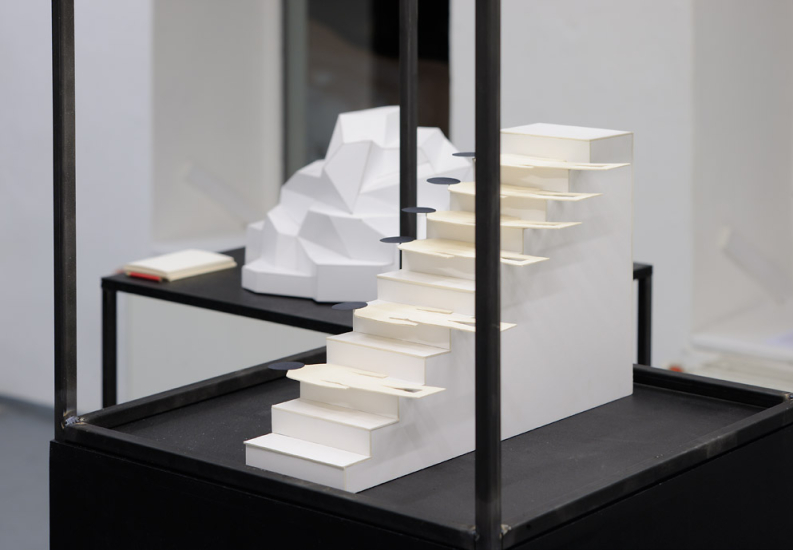 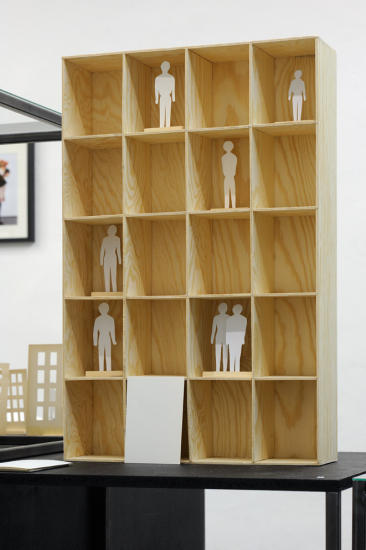 Model No 9_The facade of an apartment building 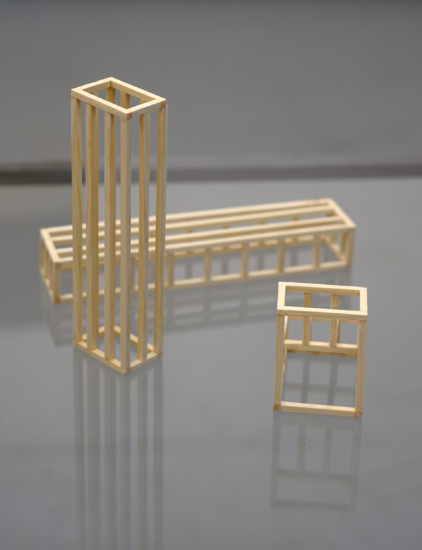 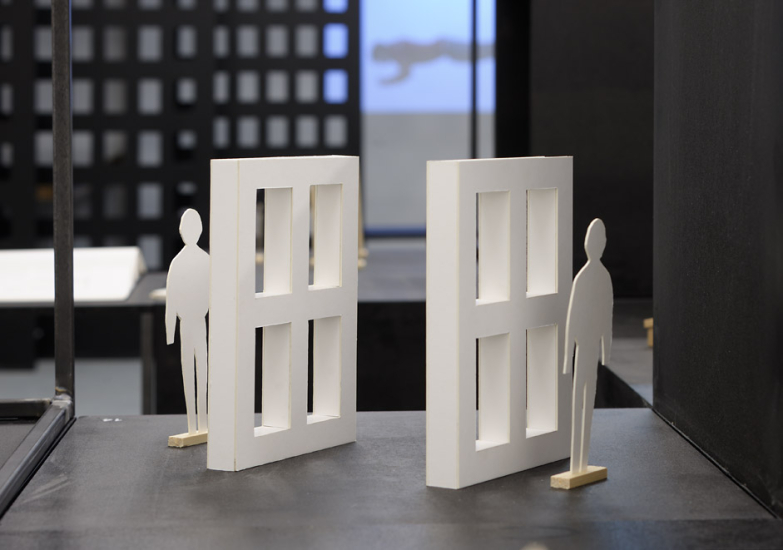 h u n t k a s t n e r is pleased to present a new project by Eva Koťátková in the solo exhibition Controlled Memory Loss. In this new body of work, the artist continues her exploration of familiar surroundings. In a series of drawings, objects, installations, videos and photographs, the artist examines, probes, and often redefines the conventional idea and meaning of “to be at home”. Through creating a series of staged situations, illustrated in drawings, video, photographs and models, the artist attempts to define the scope of deeply-rooted patterns and rules, which either influence or determine our behavior as we attempt to integrate ourselves in – or, distance ourselves from – conventional structures. In a remote place, far off the beaten path and from scenic views, lies a neglected mound of discarded household items. Many of the items tossed on this pile have already lost their original shape; most of them have lost their original functions, or potential for recovery and reincorporation back into daily life. As the individual objects sink deeper and deeper into the lower layers, disappearing into the stratification of the mass, each object begins to take on the shape or identity of another, so that there are no longer any easily identifiable autonomous objects, simply shapes, fragments and silhouettes of the original, whose only role is now to remain caught in this anonymous new arrangement. As we look upon this chaotic conglomeration, we might find ourselves overcome with resigned regret, or, on the contrary, gripped by an determination to bring these things back into use, to return them to their former state, and awaken people’s interest in using them again. This means repairing the arm of the chair, fixing the bottom of the drawer, adding on the missing chair legs, screwing new light bulbs into lamps. It would be necessary to glue, sew and piece together the fragments, and do whatever it takes to put these things back together again in some sort of semblance of their former life. But what if, in the midst of these “repairs”, our memory, experience or practice fails us and the pieces refuse to fit back together again? What if, despite our detailed knowledge of all that is familiar to us, we find we are not able to identify the missing parts, name them, or correctly piece them back together again? Then, we would be left with no alternative other than to go back to the beginning – to explore the material of the items, their solidity, pliability or softness, to guess their function in relation to our body, to try and see which objects we can sit on, which ones we can move, which things can be used for cover or to keep us warm, which objects we can hide in… The video work Exercise No. 2- Mound (Cvičení č. 2: Hromada) documents how a group of four people made themselves at home in this mound of cast-offs over a 24-hour period. In addition to 4 videos documenting a series of performances (Exercise No.1 – Hanging; Exercise No. 2 – Mound; Exercise No. 3 – Sitting, Standing, Lying; Exercise No. 4, 5 – Home Reconstruction), the exhibition also presents a series of photographs of staged situations (a human clothes-rack; a home that is carried on one’s back; an instrument for reading multiple books all at one time; an instrument for looking into your neighbors homes), and related drawings. Finally, in the center of the exhibition space, is a series of miniature models, presented on a meandering mound of interlocked black cubes, each numbered from 1 – 14, like the different stations of a board game, which illustrate situations and incidents of home life, based on real experiences. The exhibition visitors are invited to participate by creating their own proposals, in drawing or in text, of how they might react, handle – or, extricate – themselves in any of the given situations. Eva Koťátková (born 1982 in Prague) studied from 2002-7 at the Prague Academy of Fine Arts, Prague Academy of Applied Arts, San Francisco Art Institute and Akademie Bildende Kunst Wien. In 2007 – at the age of 25 – she became the youngest artist ever to be awarded the Jindřich Chalupecký Award for young artists in the Czech Republic. Koťátková combines several techniques in her work, which begins with her drawings – her many drawings are initially created without a set intention, which only later is revealed in the final form and content, objects and video or photographed performances, which are characterized by their playful exploration of the artists immediate environment – and herself.