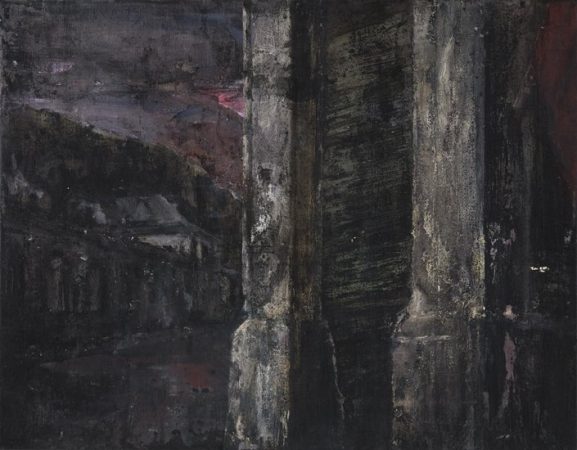 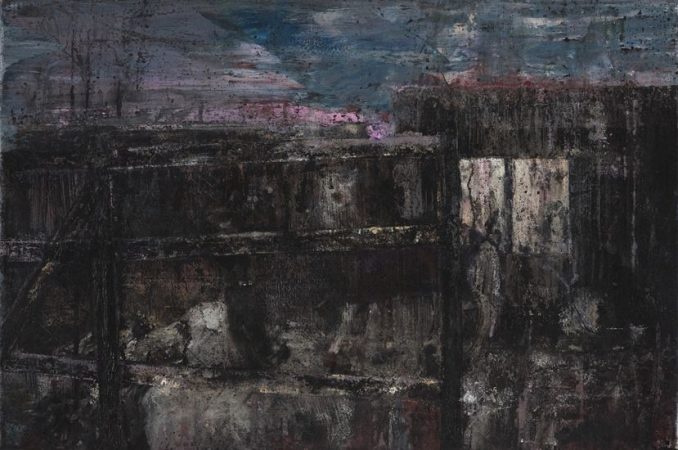 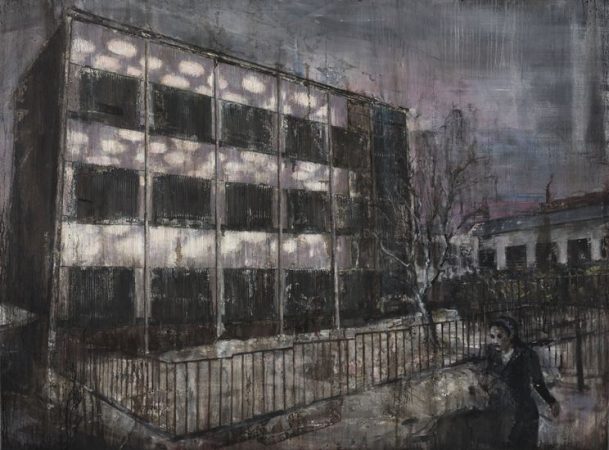 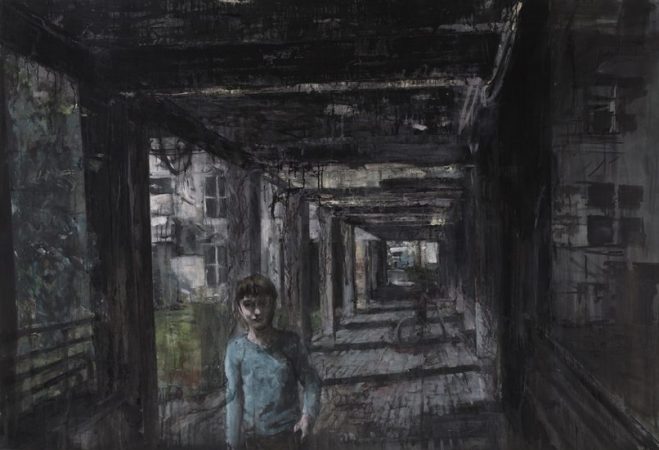 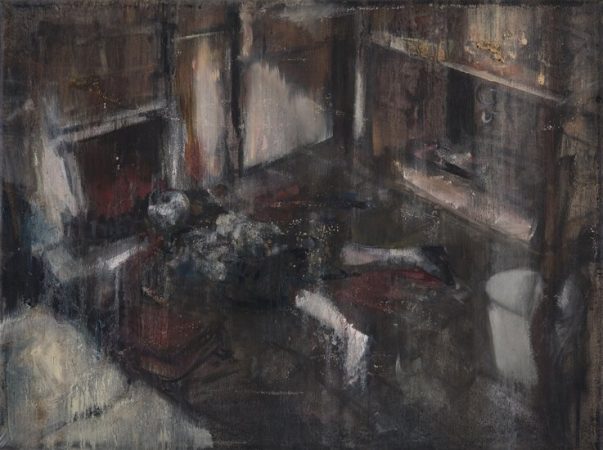 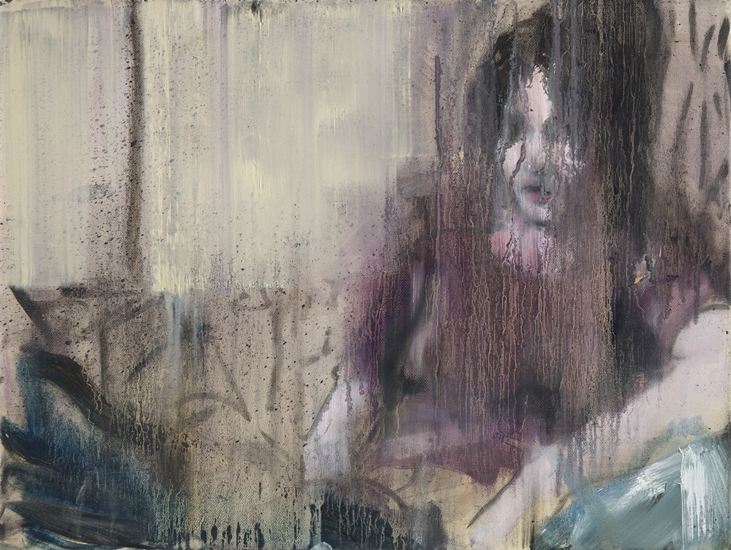 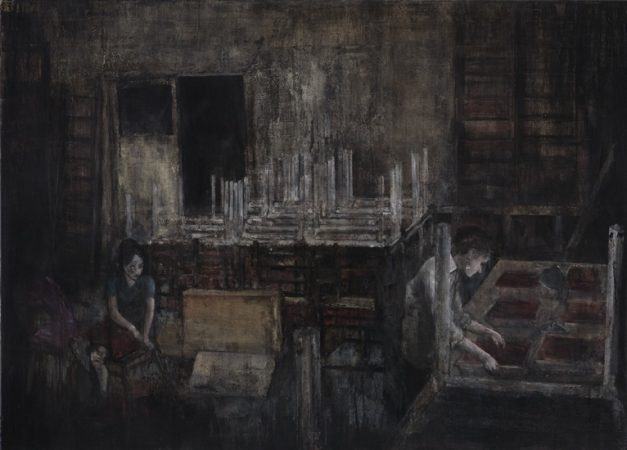 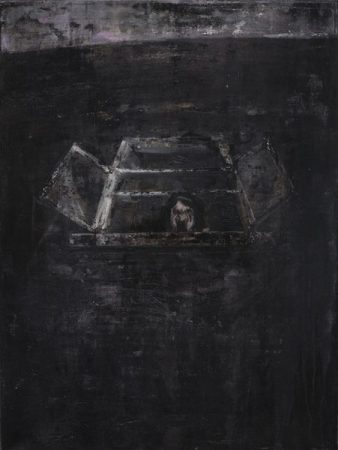 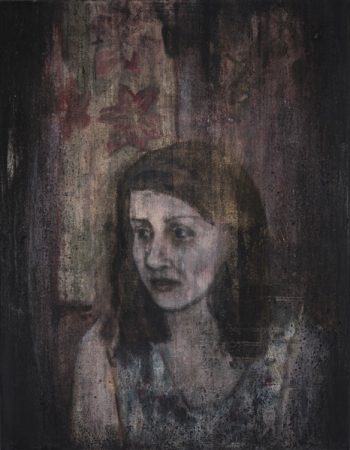 oil paint and ink on canvas

In using old photographs as a starting point, the artist was influenced by the writings of the French critic and philosopher Roland Barthes, when he said “photography is a kind of primitive theater, a kind of Tableau Vivant, a figuration of the motionless and made-up face beneath which we see the dead.” A photograph, he explained, creates a falseness in the illusion of “what is”, where “what was” or “what has ceased to be” would be a more
accurate description. The selected photographs, used as models for the paintings, were not chosen because they held any close personal meaning for the author, nor are they meant to create any kind of narrative, personal or otherwise. The images he chose just happened to catch his eye for different and various reasons – a special atmosphere, the way the light caught a white shirt, a fault in the photography creating a black frame, or just
something odd or intriguing in the background. We can still find images of places and people that figure in the Bolf’s personal life, but the artist’s relationship with the subjects in the paintings is not paramount. More important for the artist is this relationship between “what is” and “what was”.

Another source of material for this new series of work is the one act play Krapp’s Last Tape by Samuel Beckett (Krapp being described by Beckett as a man with a masochism that both demands and dreads the assault of memory), as well as a cheap secondhand paperback called something like “Unexplained Mysteries of this World”. Bolf worked with Roman Štětina, a student at the Academy of Fine Arts, on making a sound recording for the installation that is played on a simple old fashioned tape recorder. The exhibition visitor enters the gallery into an almost empty narrow entrance way. Just one small painting is on the wall: a dark and smoky image of a prostrate figure lying face down on the carpet in front of an open fire place. Inexplicable noises can be heard coming from the other side of the wall: moving, scraping, and shuffling, even sawing sounds – someone is there, doing something. As the visitor rounds the corner and enters the exhibition space, they see that the sounds are only coming from a recording played on a tape player lying alone, on the floor, in a corner of the room. Did the protagonist they expected to meet, place this audio decoy there to fool them and then escape out the back door?

Josef Bolf’s palette has become much softer and subtler over the past year; these paintings are more “painterly” than his previous work, which was – in particular the scratch paintings from 2006-7 – more a derivative of his drawings. The paintings were meticulously worked on in multiple layers in oil paint, often with a trickle or thin layer of ink to create a sort of rainy black veneer. The artist easily spent a full month in the studio to complete just one work. The locations interpreted the paintings (i.e.: The Reservoir, On the Corner, The Castle, The Hospital, The Storeroom) no longer emphasize the sterile landscapes and harsh lines of the large housing estates on the edges of Prague that much of his earlier work favored. There is a softer, gentler, pensive atmosphere and, while still dark, include a wider range of colors than in his characteristic pink and black works. Despite, or perhaps because of these departures in technique from his previous work (Bolf is an artist who gets bored repeating the same thing
over and over), these new works are still very distinctively “Bolf-esque. There is one constant theme that remains present throughout all his work: death and mortality.