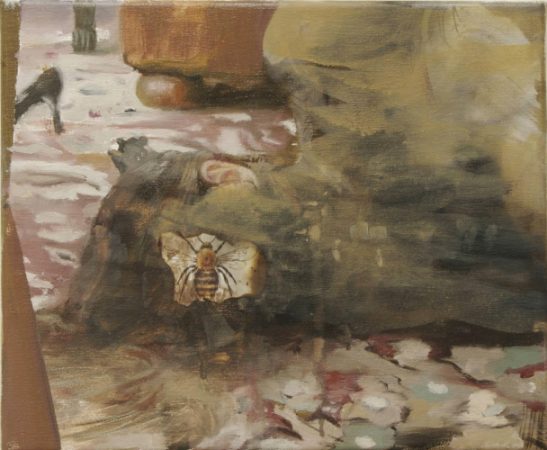 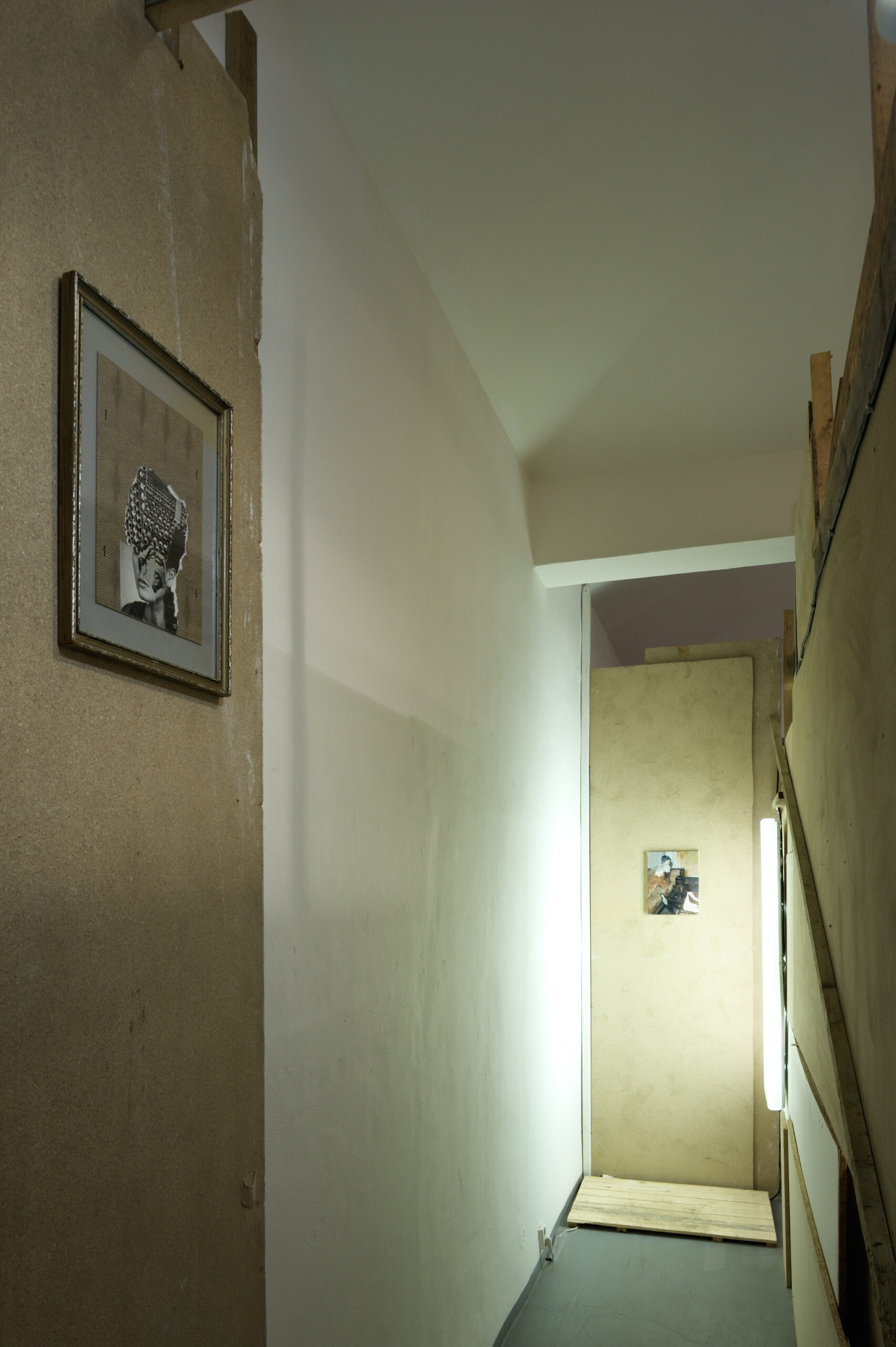 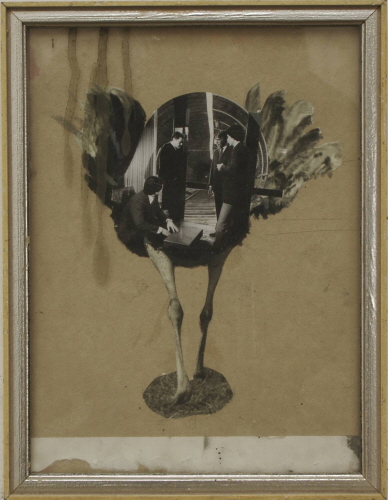 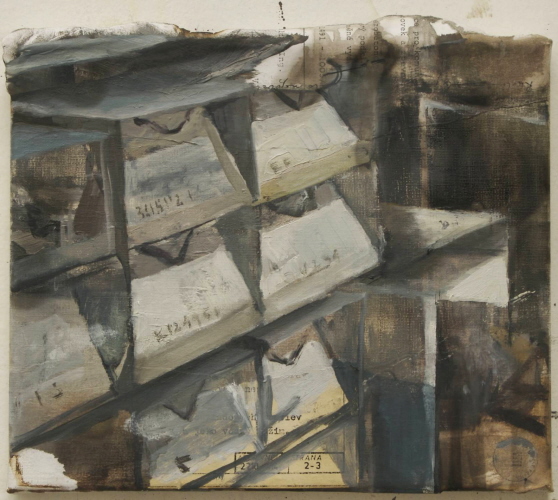 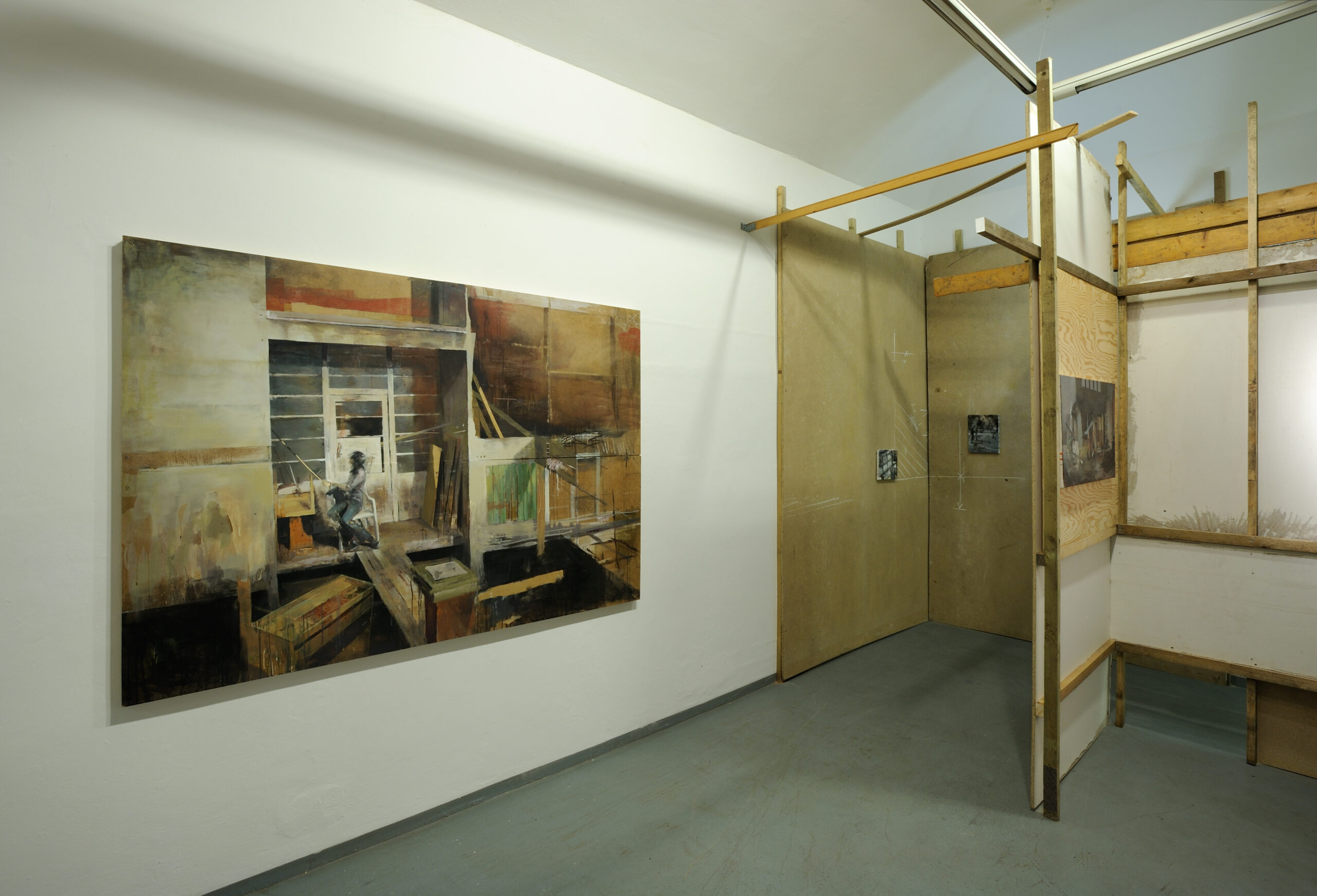 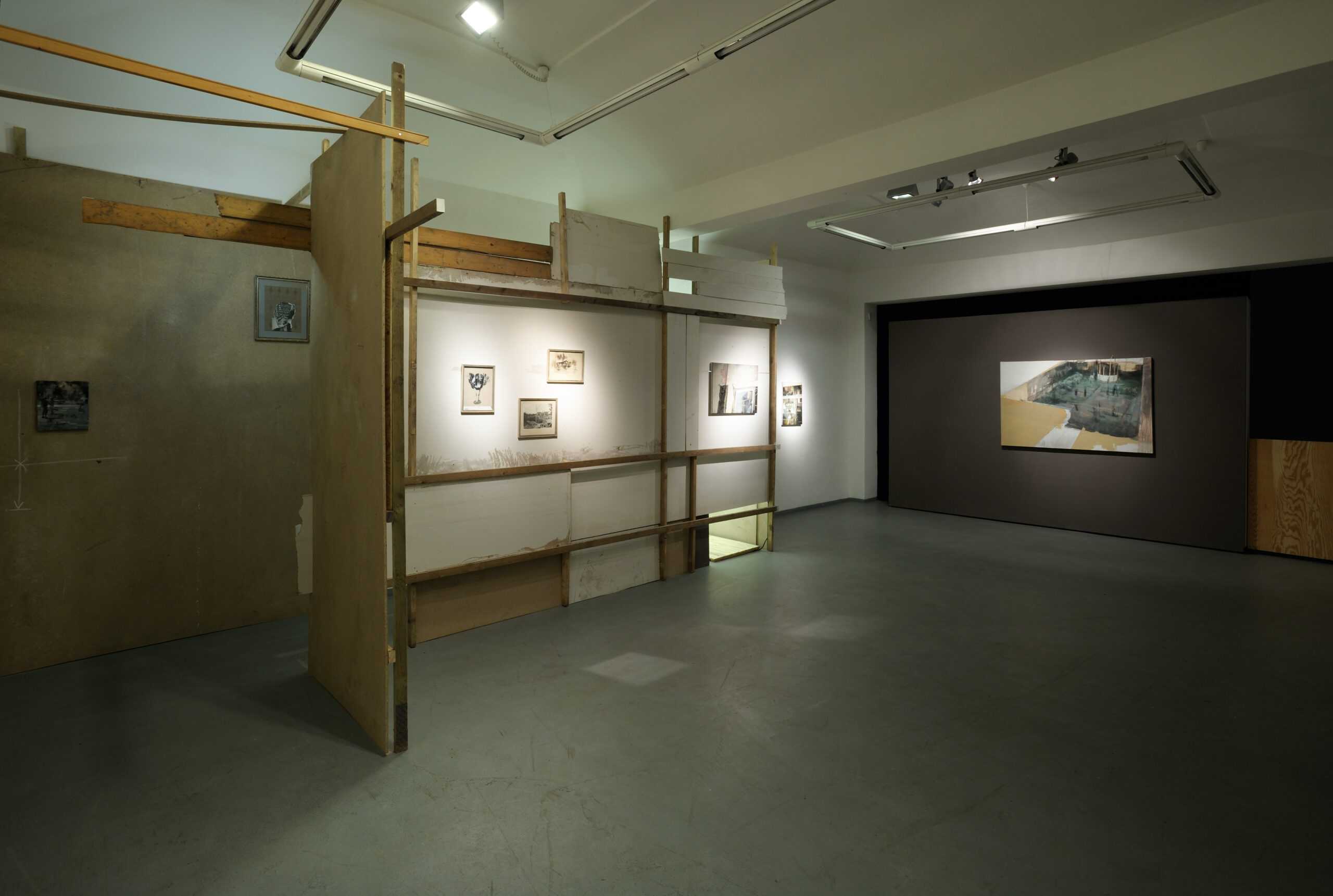 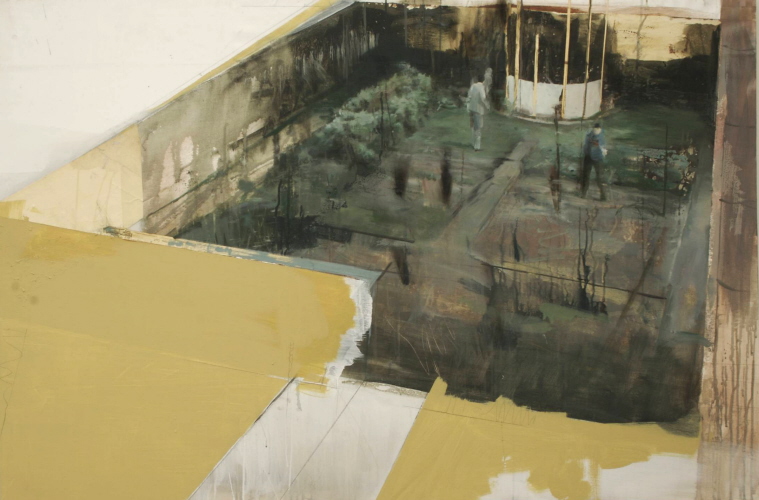 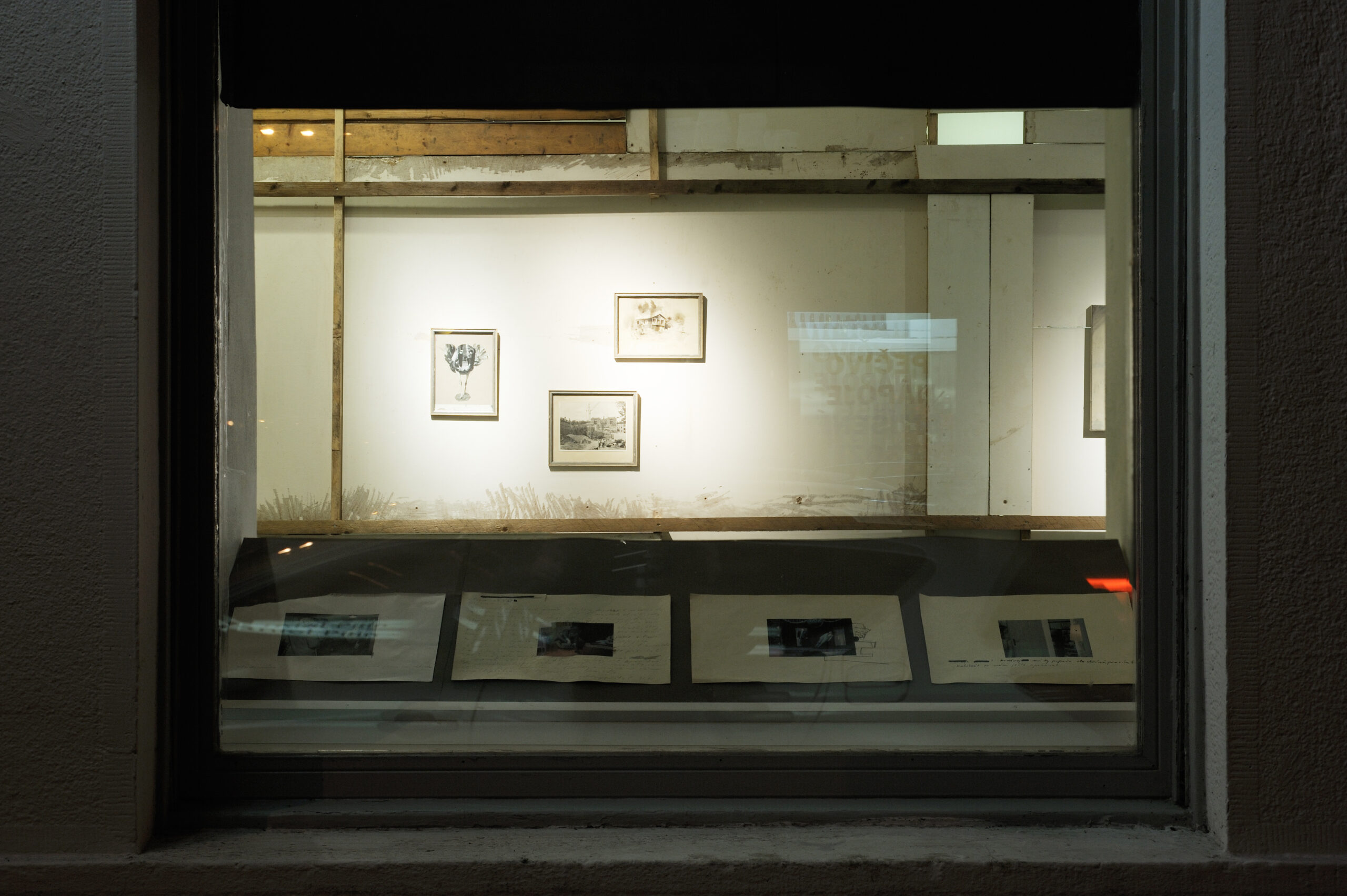 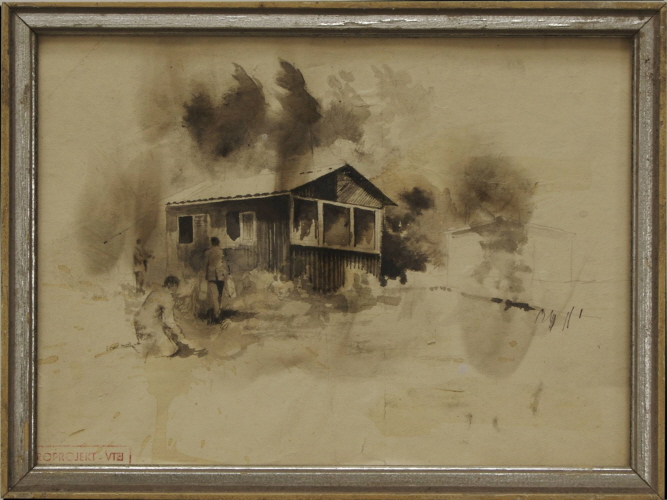 hunt kastner is pleased to present a new exhibition by the Prague based painter Daniel Pitín, entitled Men in the Garden. In this new body of work, the artist transports us to a special world suggestive of backstage film sets or the wooden huts of a garden colony. In the exhibition, the artists combines painting, collage, sections from a personal diary from the 1960s, video and architecture, completely transforming the gallery space thorough the use of wooden panels, boards and various materials and props.

„I was inspired in this exhibition by studio film set designs and constructions. I am also fascinated by how people manage to inexpensively construct garden huts or bungalows. They find some materials and then use them to put together a roof, or a table. These buildings are thrown together from various materials, which previously had another function and history. I work in much the same way; I find various images from films, or from my surroundings, which I then compose into the space of the painting. I imagine a world that is deconstructed and then rebuilt into a new composition and complex; a world where everything is in continual movement and mutual confrontation. The wooden huts, and the way in which they are slapped together from various panels and lumber, remind me of the principal of how our memory works. It is also determined by what has lodged itself there in the past – these memories then become rearranged and move towards the front of our consciousness, where they are confronted by our current perception.
For me, Men in the Garden is a metaphor for our collective memory: they stand in a (un)protected place in the garden, always on the lookout for something or someone“.

At the exhibition opening, there will also be a presentation of the new publication The Last Chobotango, written and illustrated by the team of young screenwriters Vojtech Mašek and Dzian Baban, and published by Lipnik nakladatelství. The Last Chobotango is the third and final comics in the trilogy The Monster Cabaret of Fred Brunhold. The authors, Baban and Mašek, tell an intricate, dark, grotesque and melancholy story about a bookkeeper named Damian Chobot, who had been brutally chobotized during the former regime. Ever since this time, he has been wandering in search of his identity, battling with phantoms, like a deformed variant of an Eastern block comics super hero, caught up in a labyrinth of stories that are continuously developing, unfolding and contradicting each other. (http://www.tichysyndikat.cz/)

Daniel Pitín was born in 1977 in Prague and studied at the Prague Academy of Fine Arts in the studios of classical painting and conceptual media from 1994-2001. During his studies at the Academy, he twice received the prize for the best studio work of the year, was the recipient of the Henkel Art Award for artists from Cental and Eastern Europe in 2004, and in 2007 was awarded the Mattoni Prize for the best new artist work at the Prague Biennale3. His work can also be currently seen at Austrian Cultural Forum in Prague, at an exhibition featuring selected artists who were recipients of the KulturKontakt Austria grant supported residency program in Vienna (until 6/3/2009).
txt in czk