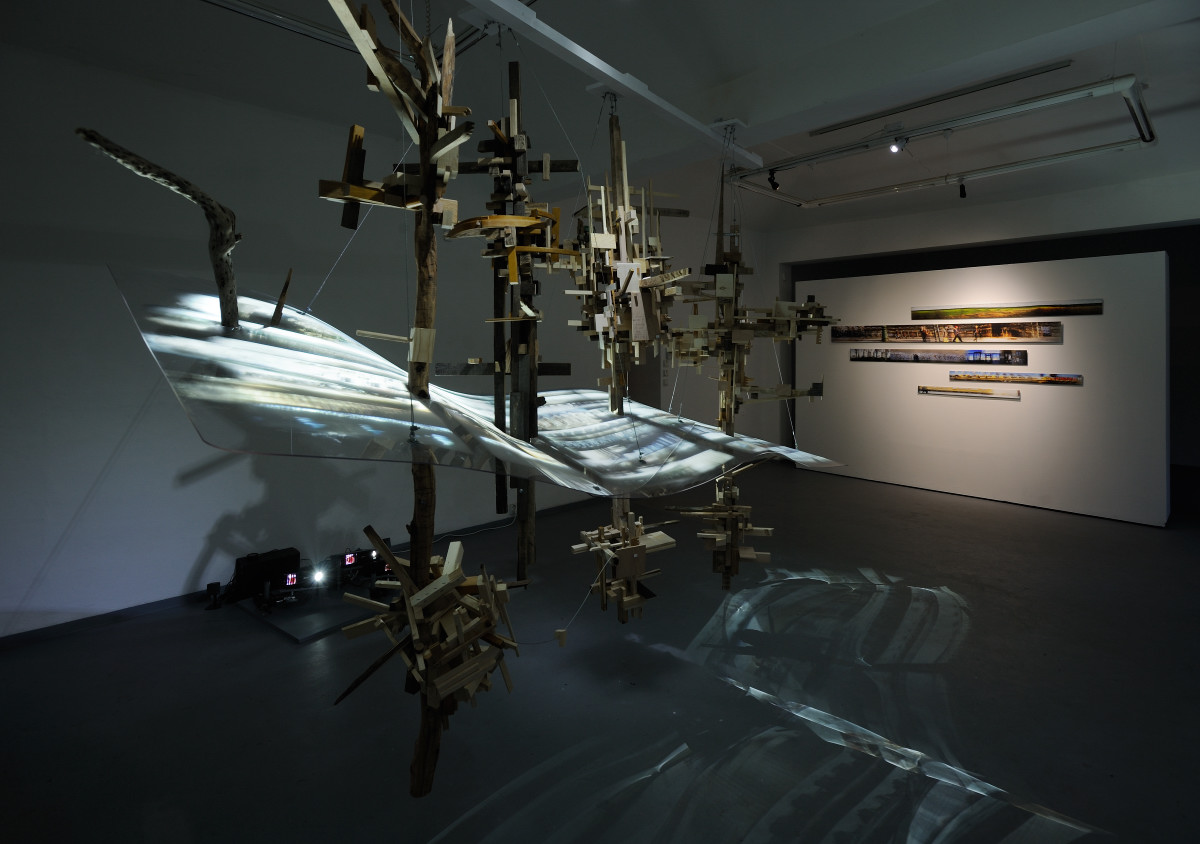 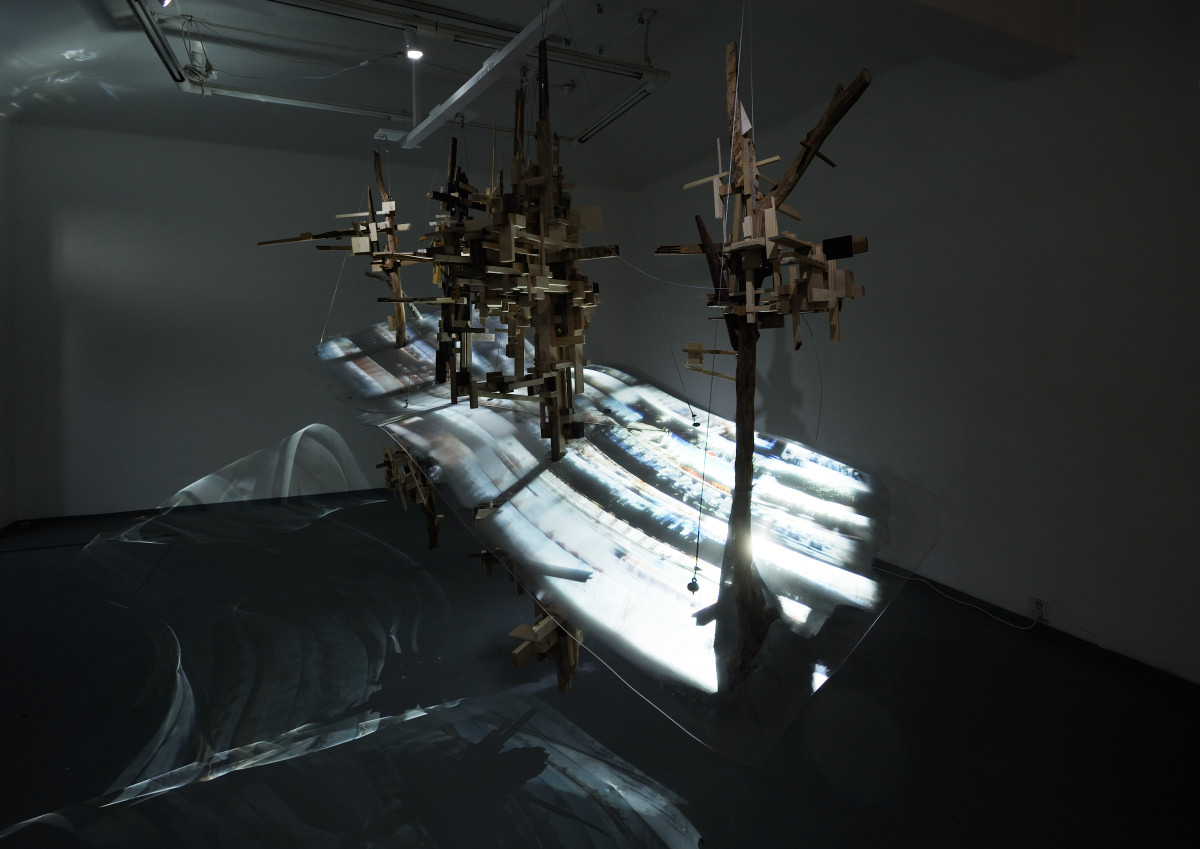 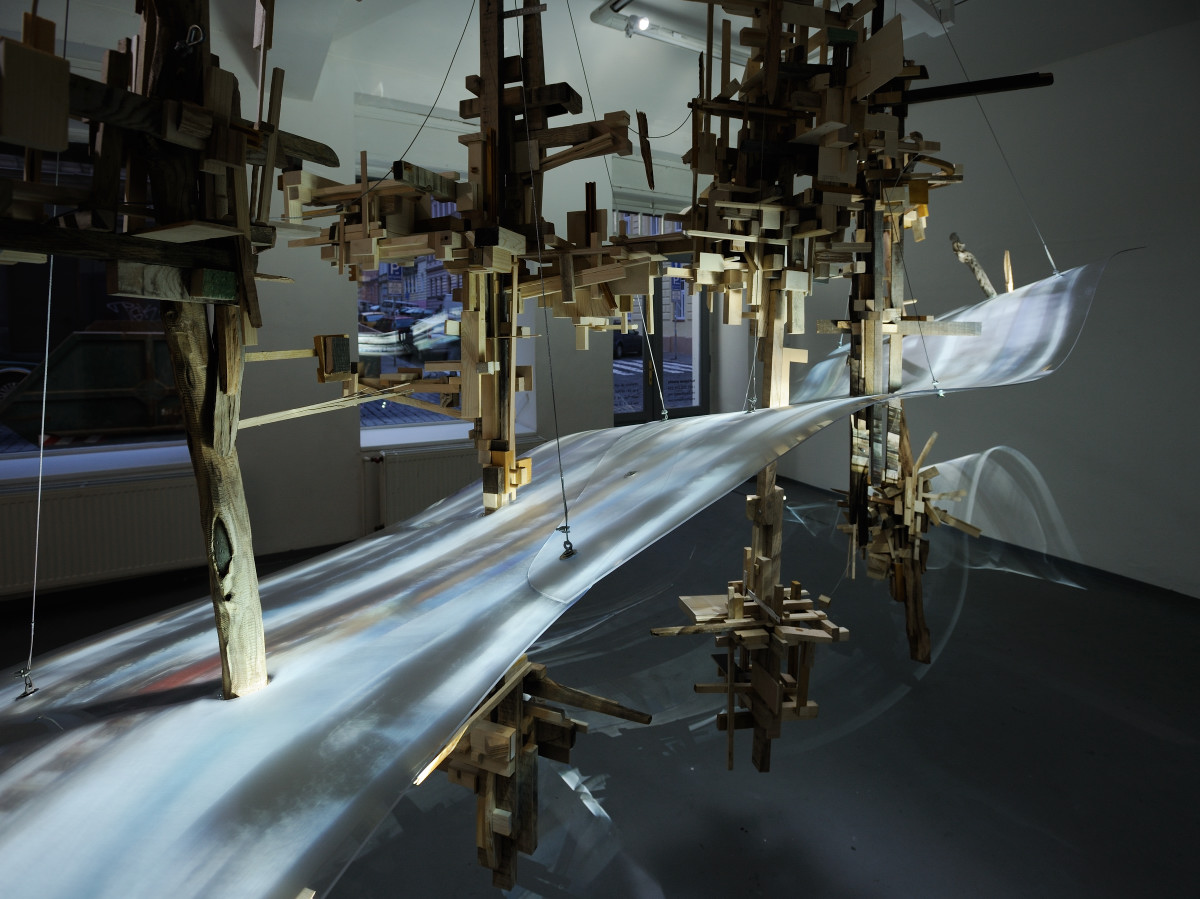 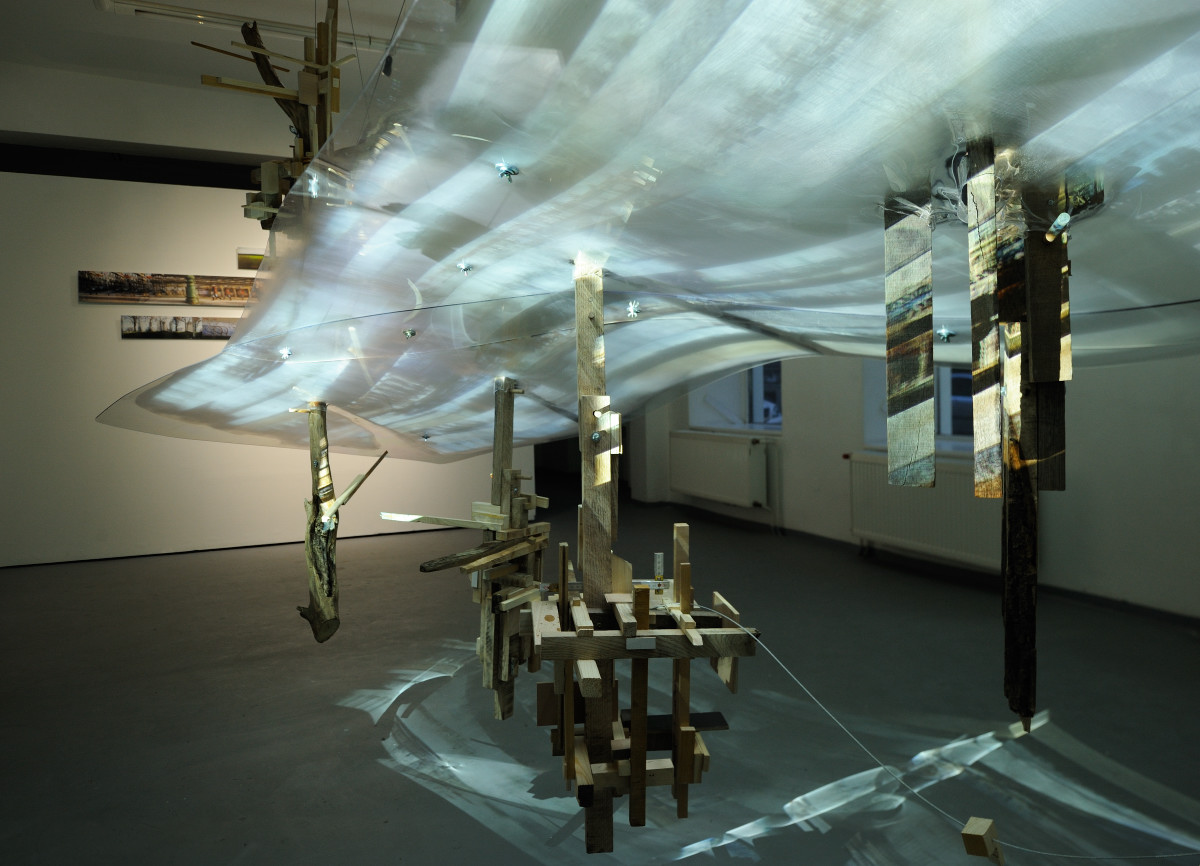 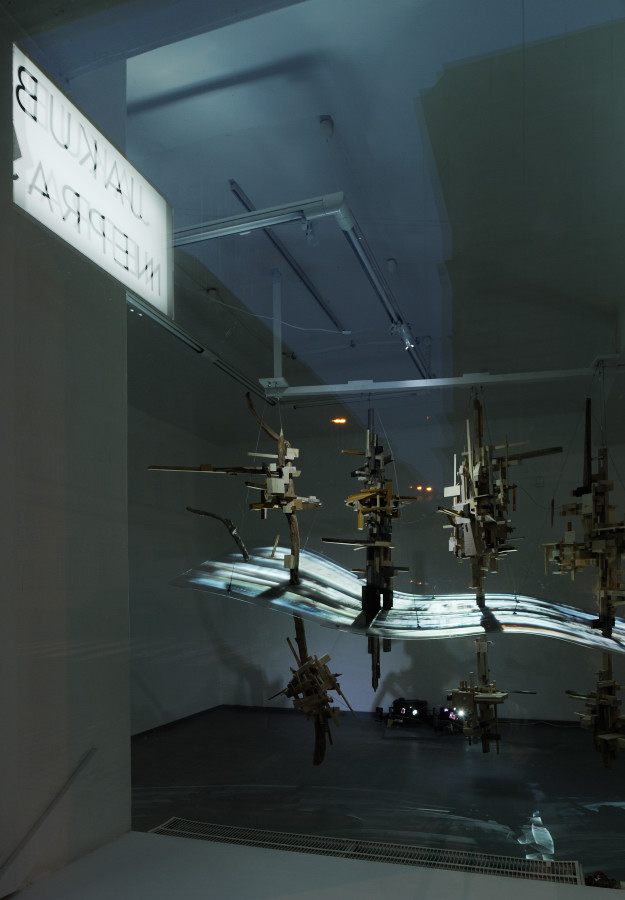 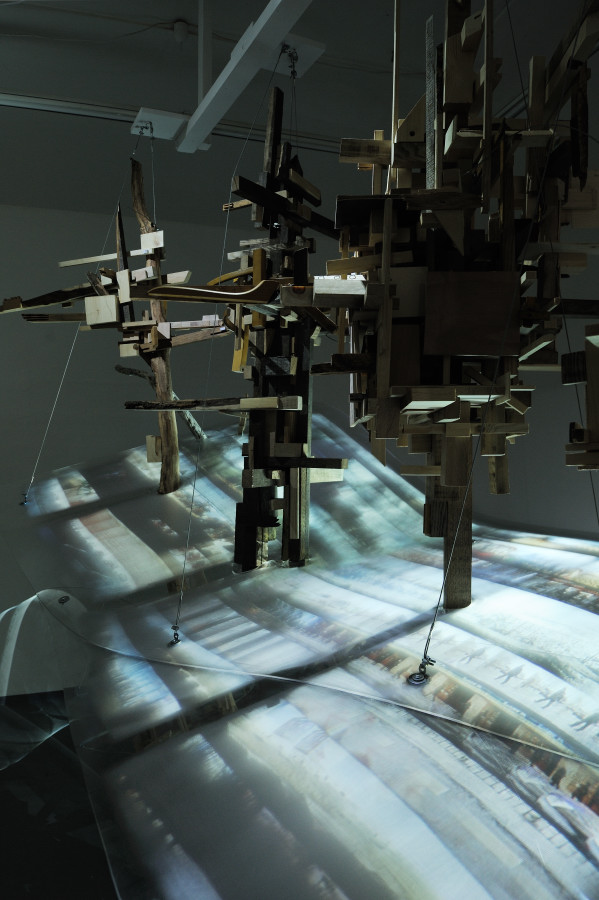 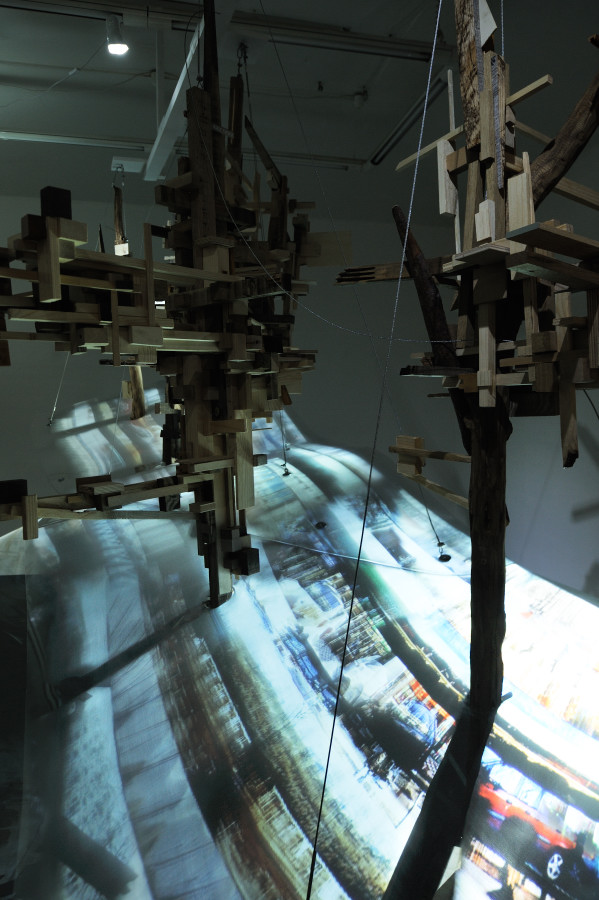 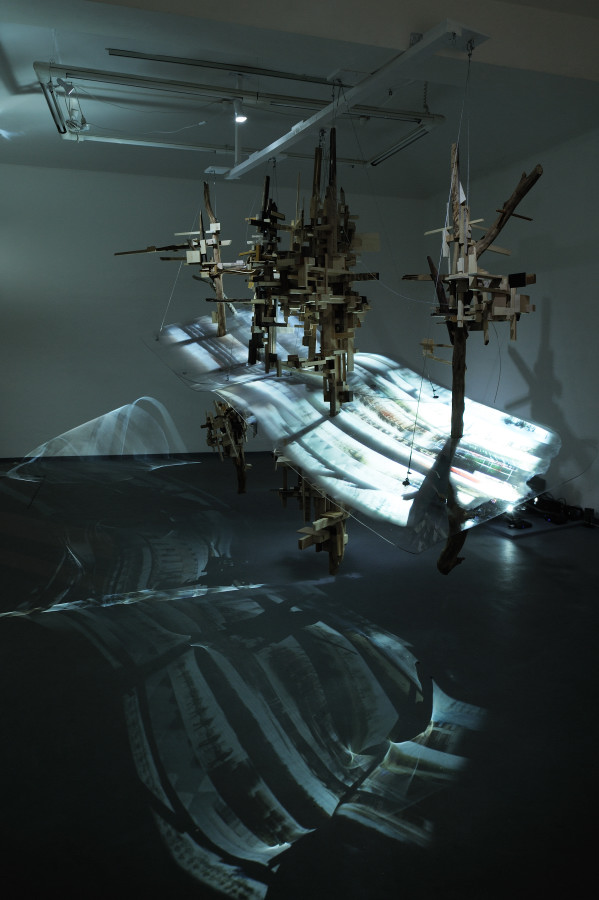 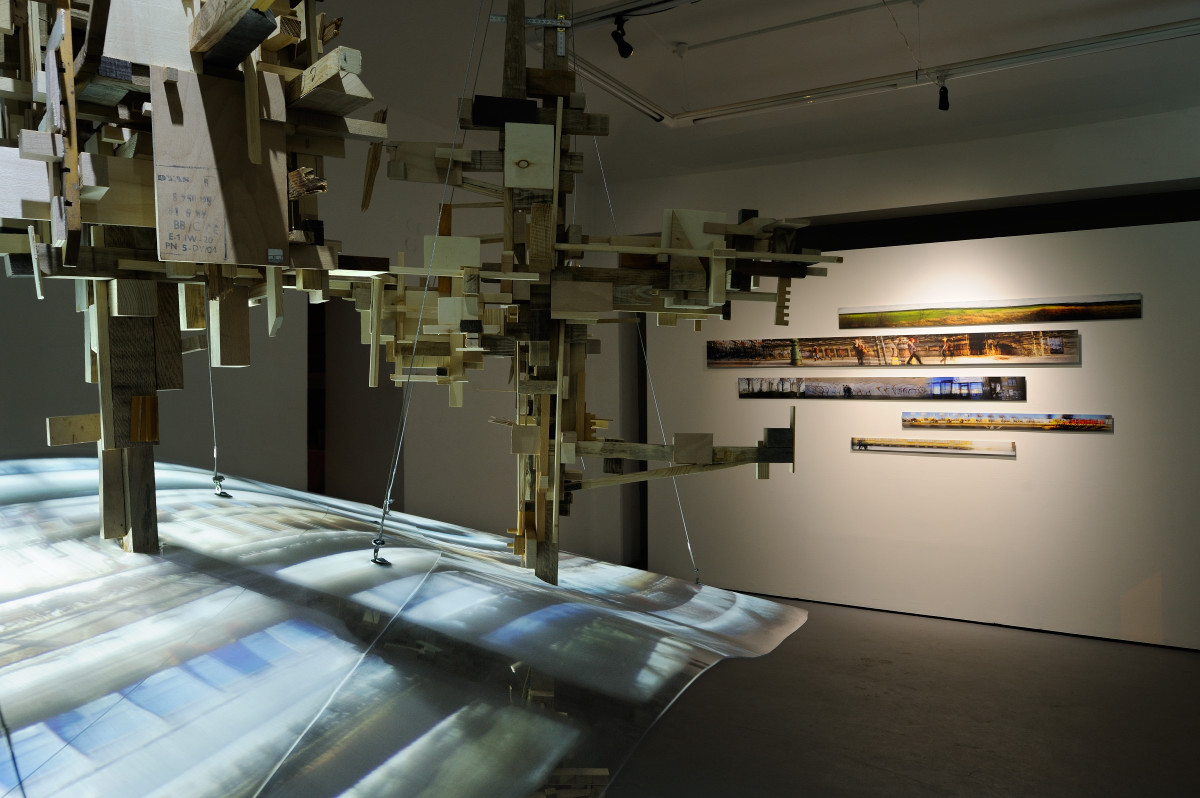 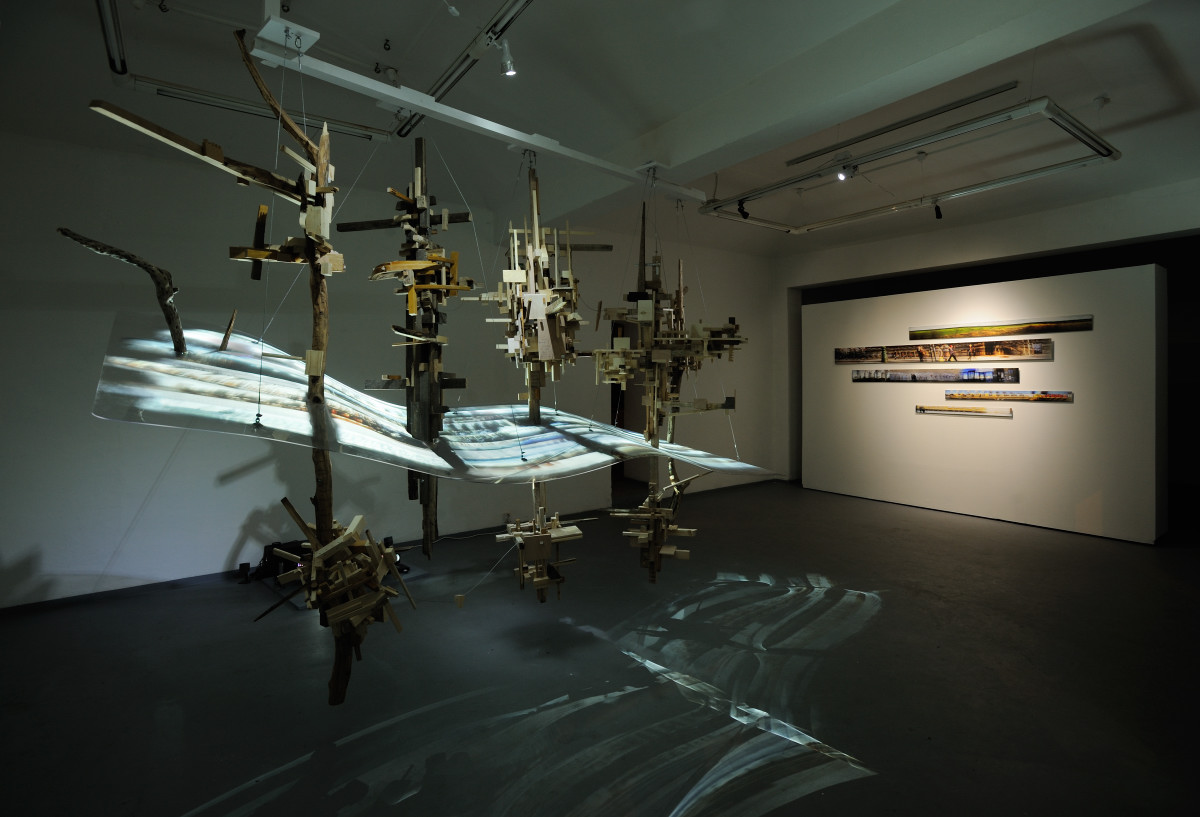 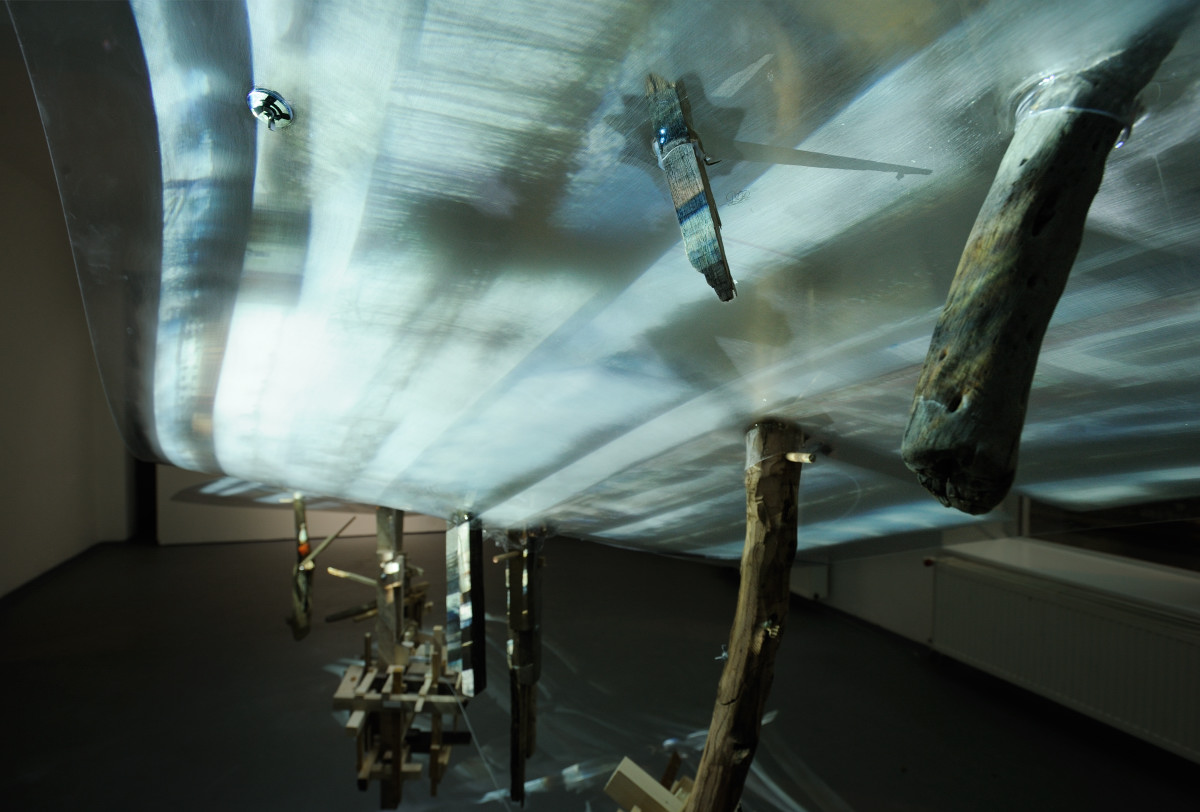 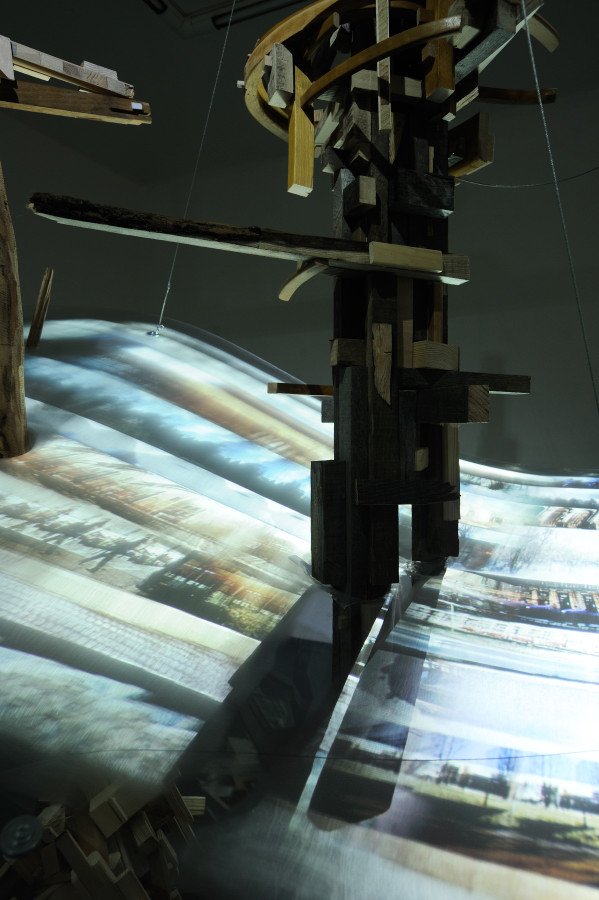 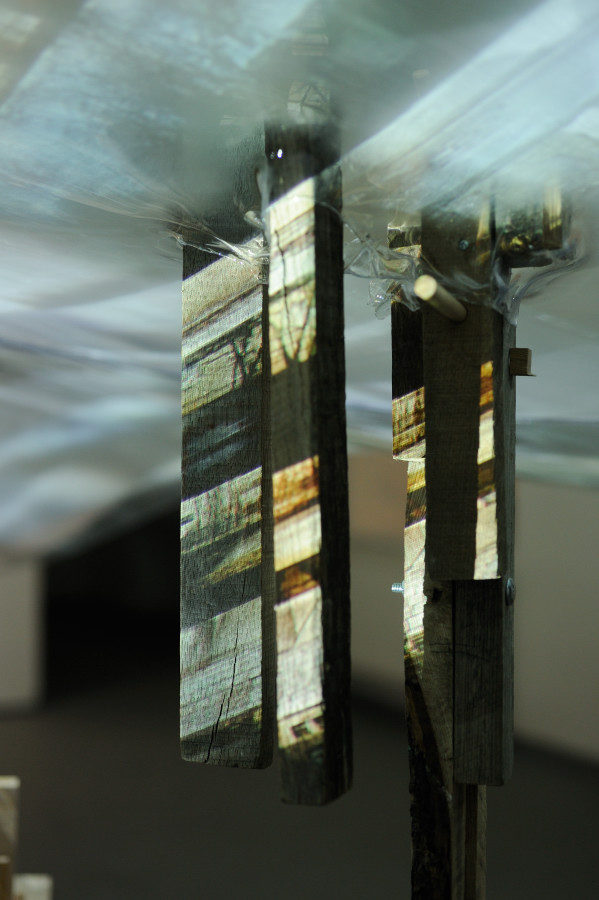 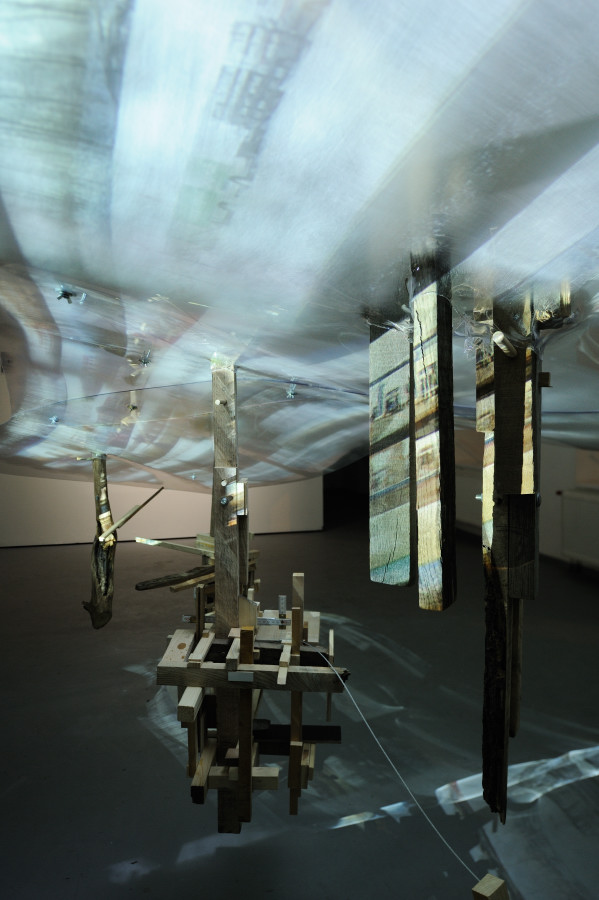 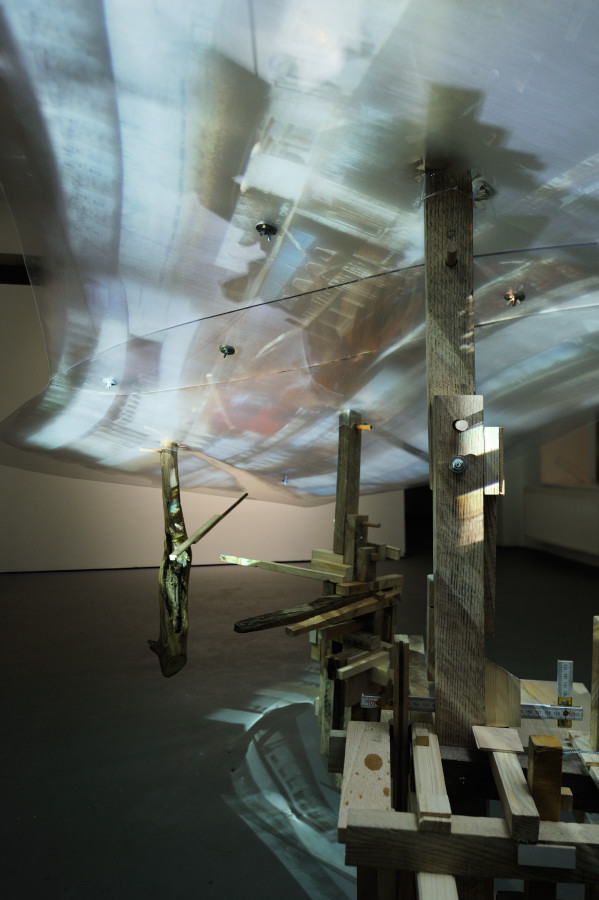 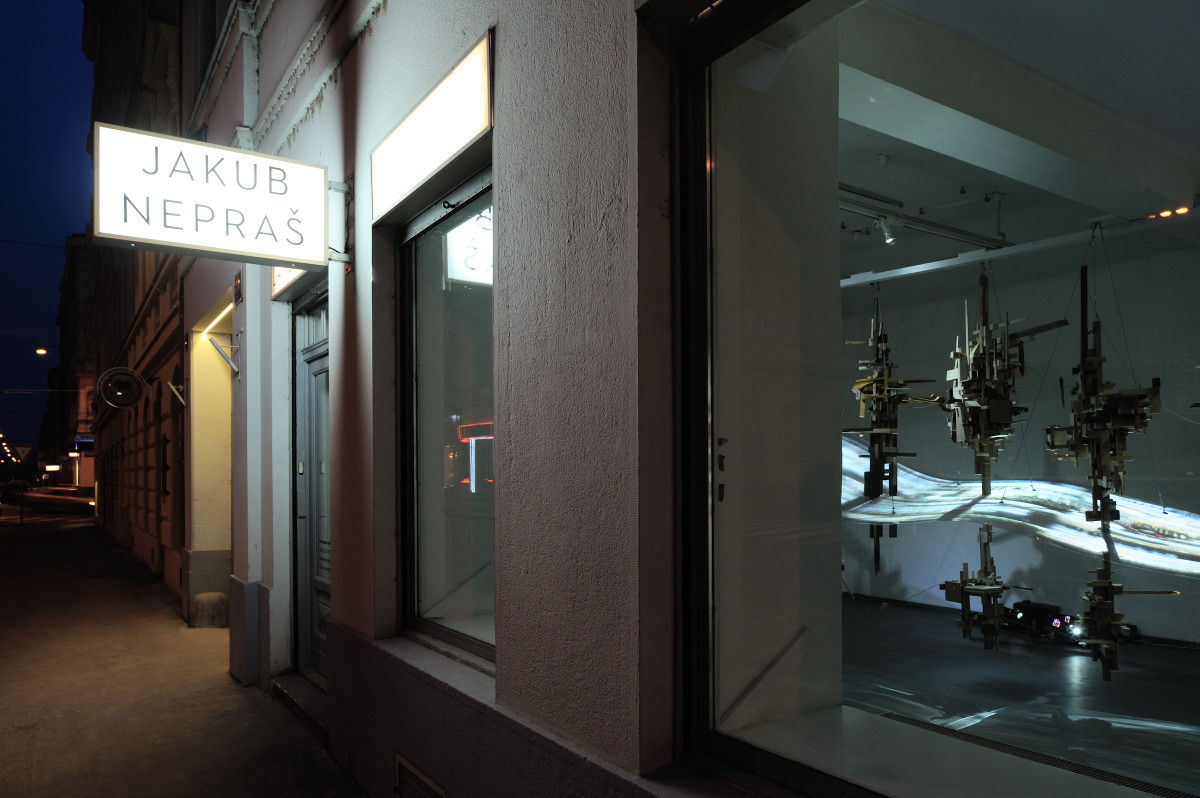 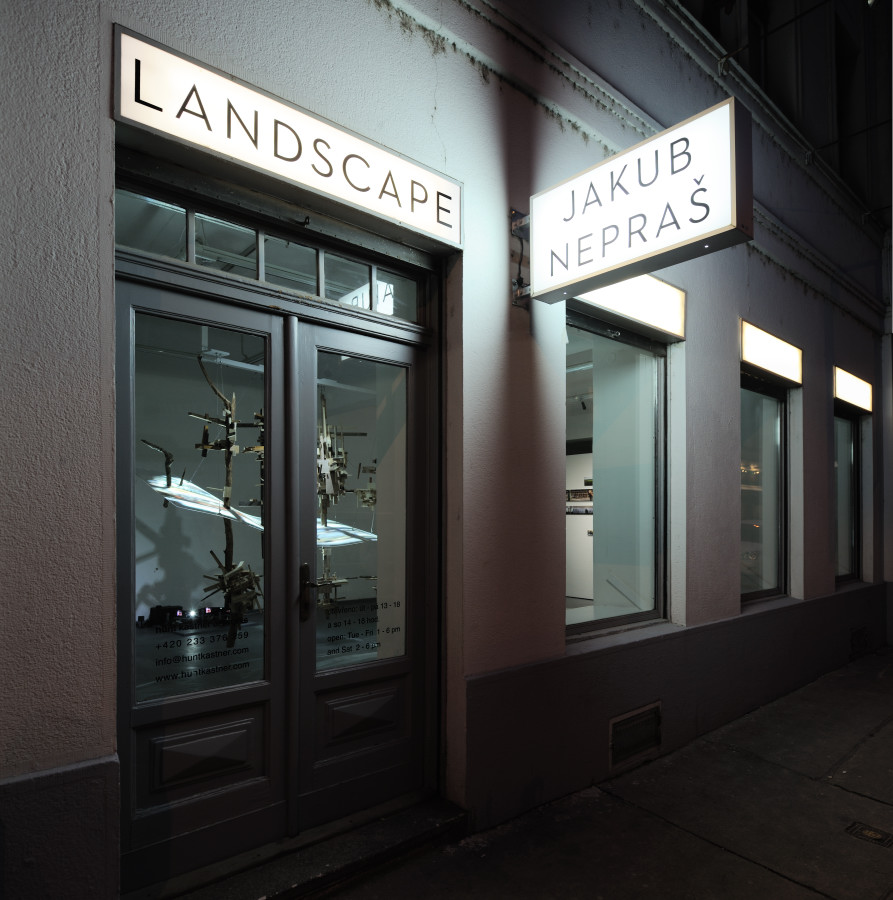 At first abstract, on a second sight surprisingly concrete – the core of Jakub Nepraš’ work has always been firmly anchored in reality, especially in the social systems to which we “voluntarily” submit ourselves as we go about our everyday lives. Nepraš combines seemingly disparate elements in collage video installations presented side by side. They are a comprehensive reflection of today’s hybrid society whose essence seems to be reduced to the need for constant movement and an exchange of information, often without pre-defined objectives or clear reasoning. The video installations’ shimmering and luminous fragments are of ambiguous origin but are always subject to continuous change and relentless movement. The unknown becomes known, the familiar unfamiliar again. There is often no hierarchy in the maze of fast-moving particles and linear paths are reversed deliberately in an endless circulation of almost anything.

In his most recent installation Landscape (2012), created for hunt kastner, Jakub Nepraš adds a new level to his work. Organic processes and the theme of continuous circulation, which were preeminent in the author’s earlier work, are no longer at the forefront. Nepraš is no longer solely interested in thematizing the neuralgic aspects of our time and society’s mechanisms. He now focuses primarily on disrupting the “smooth” process of this reality, pointing out social transformations that are the key to the rebirth and redefinition of the current socio-economic system. Unlike Nepraš’ previous work, Landscape is therefore not a mere mirror of reality, and does not capture this reality as a form of heterotopia i.e., as the “other” space; rather, it is an outline of an ideal form.

Nepraš is inspired by the 20th century avant-garde movements, especially Cubism and futuristic aesthetics, although his references are not specific. While his decomposition of shapes, which points to the heterogeneous nature of reality as well as to the need to perceive the tackled issues from multiple angles, harks back to Cubism, his futuristic aesthetic, i.e. esthetics which merge the dynamics of modern times with its glorification, only amplifies, paradoxically, the unsettling feeling of the endless flow of time and our inability to pause in order to revise the contents. This collage-like record of reality, which allows the author to present multiple frames simultaneously, is thus only a reference to the necessity to confront the present with the past and, possibly, with the foreseeable future.

Landscape is, in many respects, an idealized form of the present, it is a utopian landscape of today – a place whose coordinates can be difficult to sense but despite this, or precisely because of this, it is a place worth moving towards.

Jakub Nepraš (born 1981 in Prague) studied sculpture and new media at the Academy of Fine Arts in Prague from 2001-2006. He also spent a semester studying under Michael Bělickýat ZKM Karlsruhe, and at the well-known Prague Film Academy FAMU. His work has been exhibited internationally throughout Europe, in the Far East, and in the Americas. In Prague, his work can be seen in the long-term exhibition After Velvet at the Prague City Gallery, House of the Golden Ring, and in the foyer of the National Theatre’s Nová Scéna (New Stage).