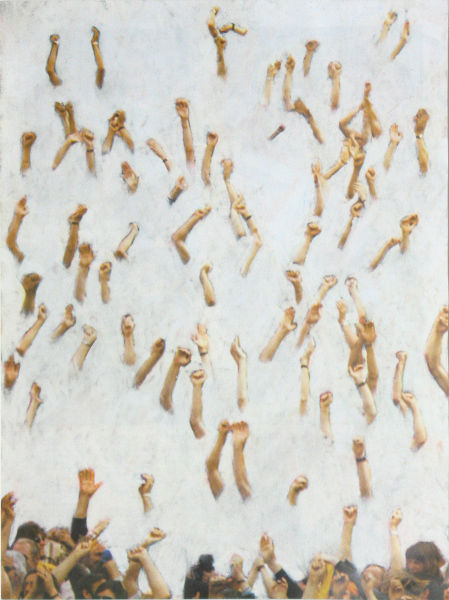 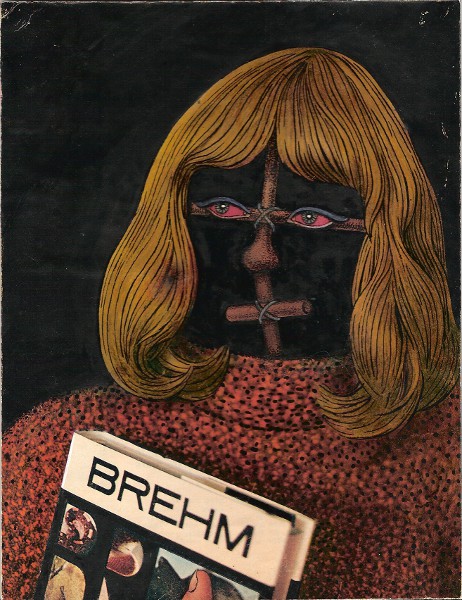 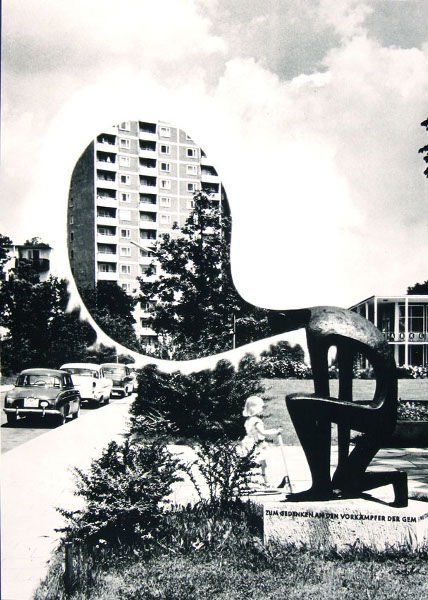 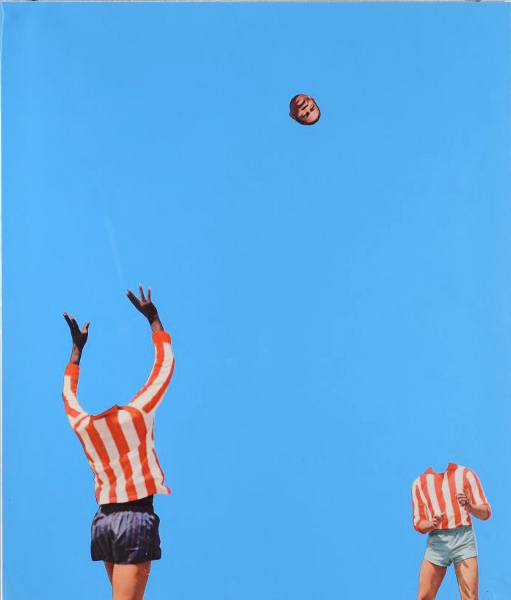 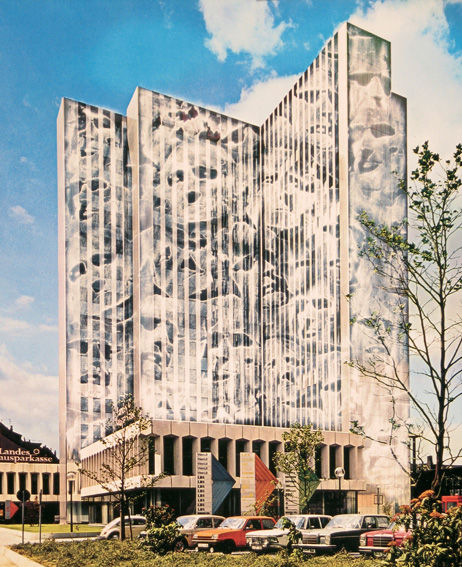 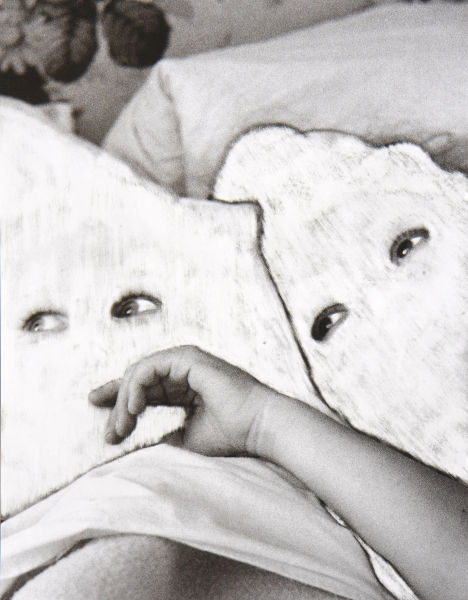 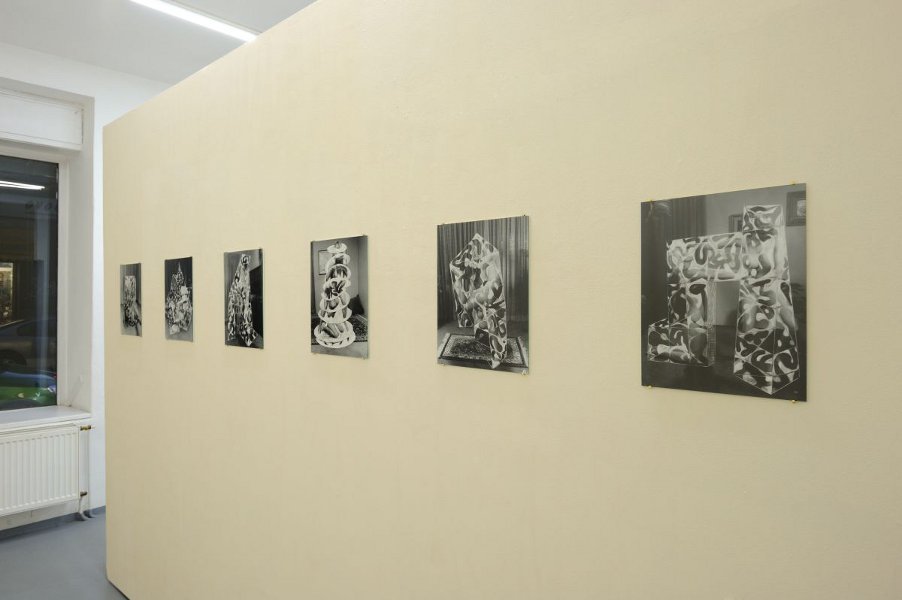 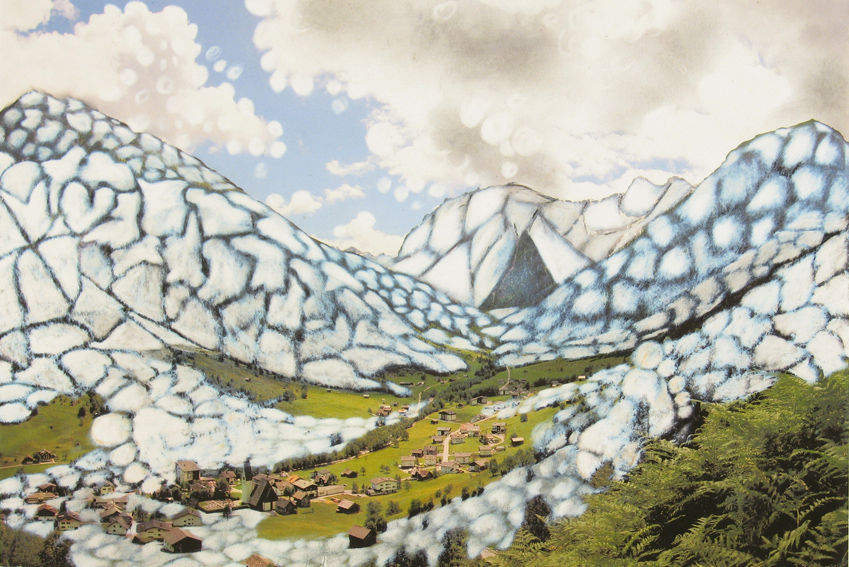 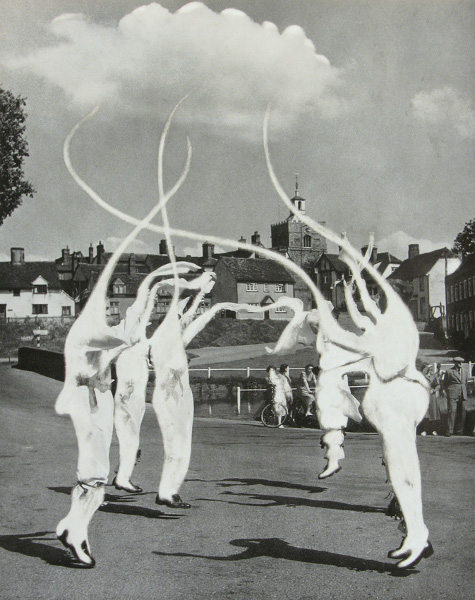 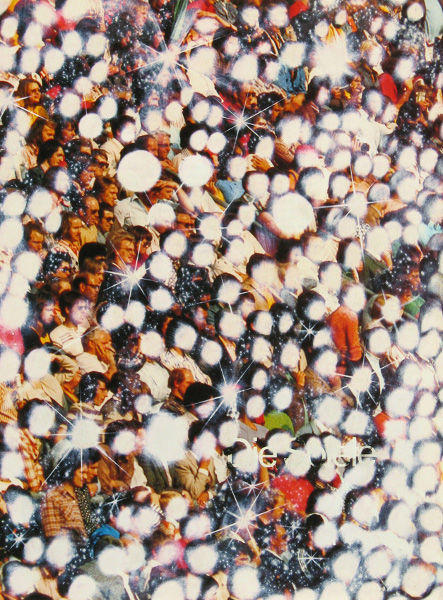 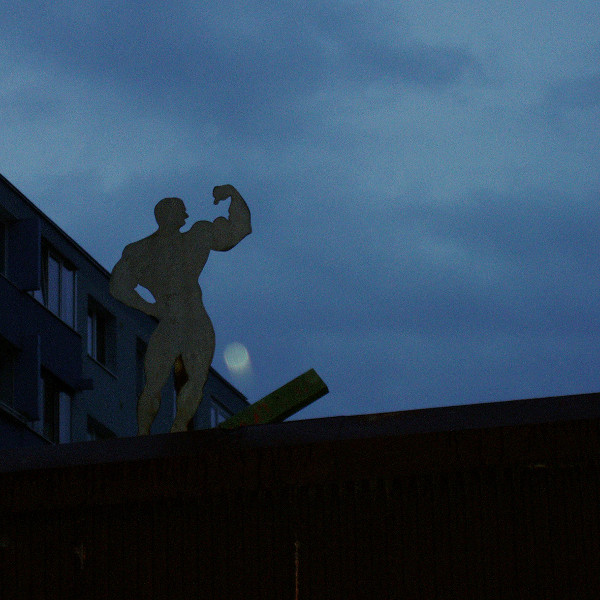 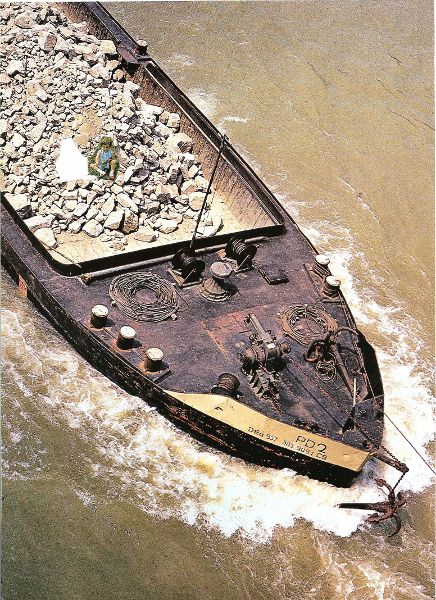 page from a magazine with a portion cut out and reversed, 28.5x19.3cm 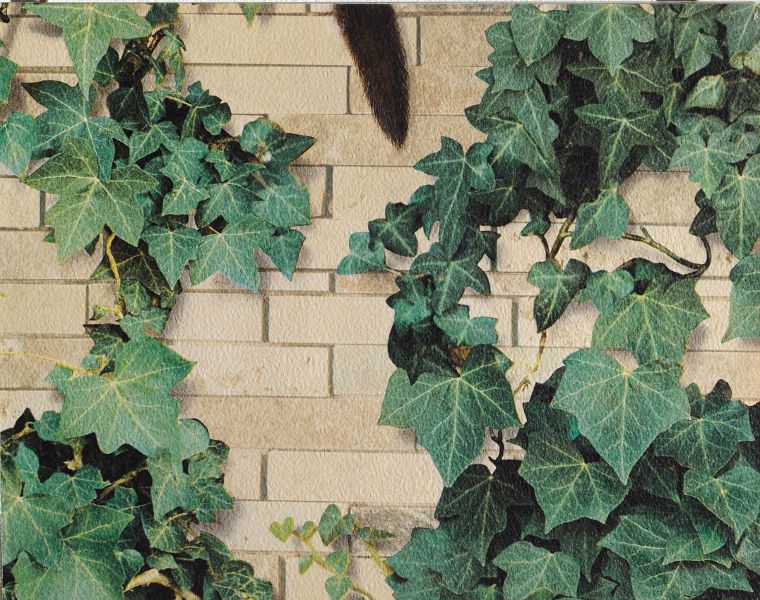 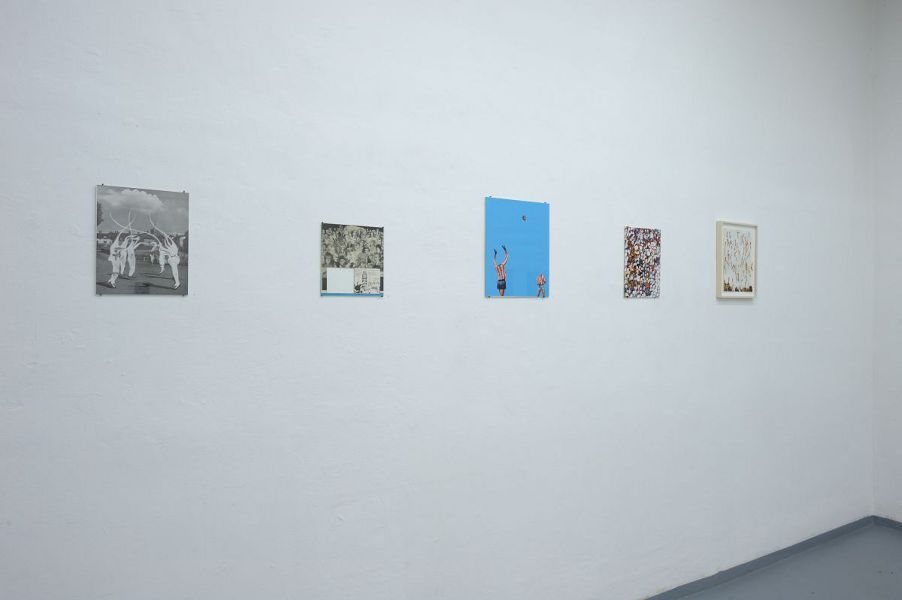 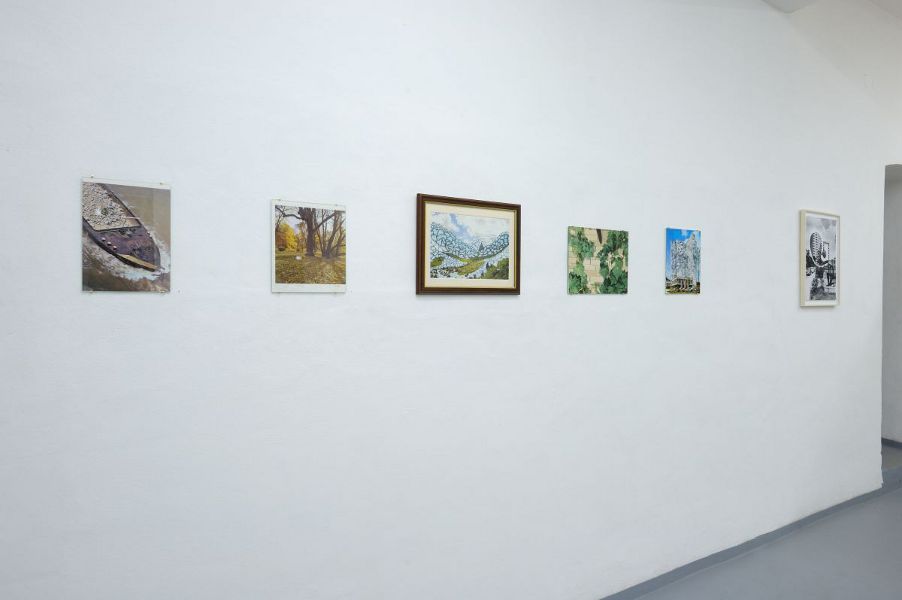 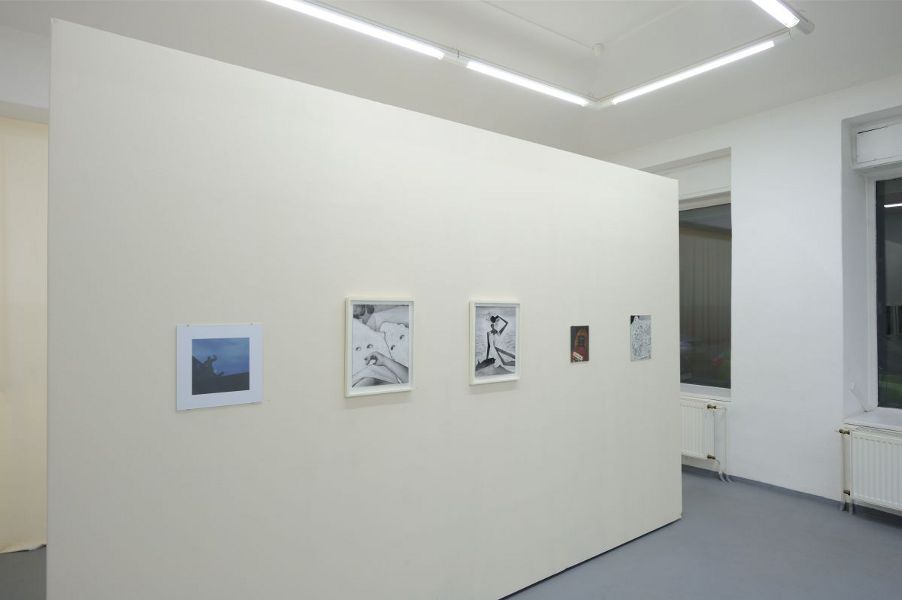 hunt kastner is pleased to present a new exhibition of works on paper by two artists – the Slovak post-conceptual artist Cyril Blažo  and the Hamburg based artist Jürgen von Dückerhoff – who alter illustrations found in books, magazines, or photographs,  through a process of intervention and modification.  Jürgen von Dükerhoff employs a unique erasure technique on the printed illustration to create entirely new, intricately formed, surrealistic images.  Cyril Blažo, on the other hand, uses a minimal amount of interference to totally transform the context of his found source material, creating witty and profound statements that cleverly contradict the original intent.

“The working method of these two artists issues from their long-term interest in accumulating, archiving and the subsequent recycling of existing images.  For this purpose both artists make use of randomly found illustrations, reproductions and photographs taken from old magazines, newspapers and books.  In doing so, they manipulate, disrupt and re-create the image of the world as presented by these original images and thus erode our common understanding of the present and the past.  Blažo and Dückerhoff approach the photograph as a form of documentation of reality, being aware, however, that reality is always influenced by our subjective perception and by the context in which the photographs are taken and presented. The approach of the two artists reflects reality, however, due to the concepts they have adopted, it reflects it in a new way.  Despite the fact that both artists recycle and manipulate, and thus question media images, and build up space for new meanings, their approaches and working methods as well as the formal features of their newly created works also differ in many respects.

Unlike Dückerhoff, Blažo´s approach is governed by chance and his selection of materials for individual artworks is determined more by momentary impulse or by his fascination for a given image.  Blažo´s method therefore does not represent the purposeful activity of a dedicated archivist, as it may appear to be the case of Dückerhoff.  The latter’s concentrated re-creation of images, the formal quality of which, along with the applied frottage and grattage techniques, pick up on the methods used by the Surrealists in the first half of the 20th century. Blažo´s modified photographs, collages and photomontages, on the contrary, are characterized by their seeming effortlessness.  Blažo often lets the original image speak on its own and – by means of subtle, at first sight almost indiscernible, interventions – creates new references, commentaries, and constitutes new narratives.  Although Cyril Blažo´s work often becomes involved in the social-political sphere, the main means of communication between the author, the work and the spectator often take on the form of humor and irony.  From a formal perspective, the resultant work doesn’t confront the viewer with potentially severe themes, as may be the case of the frequently disquieting, psychologically pressing scenes in Dückerhoff´s work.  Jürgen von Dückerhoff´s critique of society and the present condition of the world concentrates on the concept of the world as a chaotic space, the degeneration of the urban landscape as well as the fragmentation of the human body and mind. The artist´s complex and refined photomontages make reference to individualism and isolation characteristic of today´s world.  The work of Cyril Blažo, on the other hand, may appear almost abstract in many respects and – compared to Dückerhoff´s – almost devoid of concretes. While the space for interpretation and dialogue with the viewer may appear more prominent in Blažo´s work, however, it is also more difficult to grasp.

Although many of the works on view share similar motifs (the exhibition embraces works dealing with urbanism, collective memory and eroticism), the purpose of the exhibition is not to disclose direct parallels between the work of the two presented artists, but rather – through their specific artistic methods – to uncover further layers of the individual works and enable a deeper understanding of the strategies applied.’  (Markéta Stará, Prague, 2011)

Cyril Blažo was born in 1970 in Bratislava, ČSSR and studied from 1988-1994 at the Academy of Fine Arts in Bratislava, where he currently lives and works.  He is part of a younger generation of post-conceptual artists, who, along with former schoolmates such as Roman Ondák and Boris Ondreička, have led a lively and aspiring contemporary art scene in Slovakia over the past decade. His work has been featured in solo exhibitions at Tranzit in Bratislava (2006), Kunstverein München (2007), Galéria Jána Koniarka in Trnava (2008), and in the current exhibition Pekný žobrák (Nice Begger) at the Moravian Gallery in Brno until May 22nd.  Cyril Blažo is represented by amt galerie in Bratislava.

Jürgen von Dückerhoff was born in 1973 in Keeken/Niederrhein, close to the German-Netherlands border.  He studied art history in Münster from 1994-6, and then at the Hochschule für bildende Künste in Hamburg under Werner Büttner from 1996-2004.  Dückerhoff has received several awards for his work, most recently the 2010 Index Kunstpreis and the 5th Graphikpreis der Griffelkunst, in Hamburg.  His work has been exhibited throughout Europe, including the International Triennial of Contemporary Art organized by the Prague National Gallery in 2008.   Jürgen von Dückerhoff lives and works in Hamburg, and is represented by Galerie Michael Wiesehöfer in Cologne.